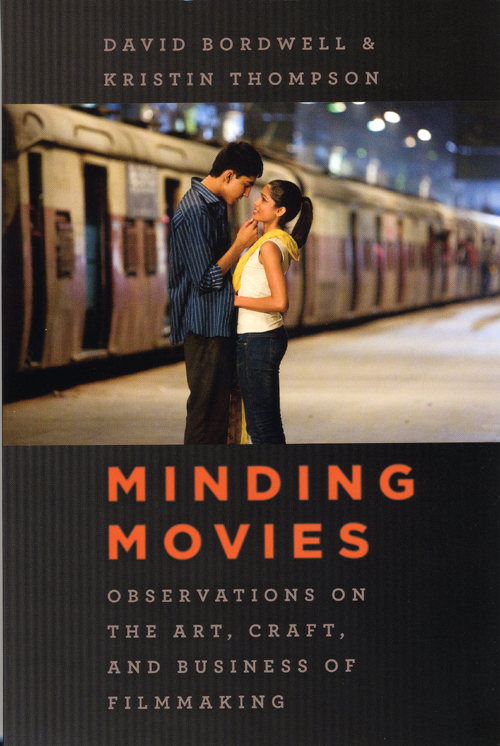 It’s a pleasure to announce that our book, Minding Movies: Observations on the Art, Craft, and Business of Film [2], has just been published by the University of Chicago Press. In some ways, it’s a conventional academic item, since it collects revised versions of published essays with postscripts updating the contents. But it’s also unusual, because those essays were published not in journals or magazines, but on the internet, on this very site. And they remain available online even as the book comes out.

Why do this? After consultation with our editor at Chicago, Rodney Powell, we thought it would be worth trying. Rodney and John Tryneski were kind enough to suggest the possibility of such a book, and the Press has been something of a pioneer in this new genre. For one thing, a collection allows us to single out and recast pieces that typify what we try to do—to explore films and filmmaking in more depth and breadth than most websites do. Moreover, the site has become vast; at the end of February we posted our 400th entry. We surmise that many readers would prefer a selection of pieces that give the flavor of our ways of thinking. Just as important, publishing a batch of web essays in book form is an experiment we agreed was worth trying. Perhaps this way our sallies would find a new audience.

Minding Movies is one more step in our exploration of the ramifications of web publishing. In less than five years, two net novices have published at least half a million words online. To my surprise, this experience has changed how I think about research, publishing, and intellectual work in general.

From the beginning, this site was something of an experiment. I wondered certain things. Was our research of interest to people outside the realm of college film studies? Could we attract that wraith, the Intelligent General Reader? Could we adapt our methods of working and writing to the medium of the Internet? Do you write differently for scrolling rather than page-flipping? Can you master an informal style after forty years of academic harrumphs?

Back at the turn of the millennium, I started a modest website consisting simply of my vitae and a programmatic statement about studying film. Later I mounted essays that supplemented my books as they were being published. The site expanded slowly, adding two or three online essays a year. In late September of 2006, in response to a suggestion by an anonymous user of our textbook, Film Art: An Introduction, we launched a blog, which we added to my original website. At first we posted every few days, but in later years we typically have written one entry every week. When we visit film festivals, the pace picks up.

We haven’t neglected the website, though. There we have republished published essays and items from out-of-print editions of Film Art. Eventually we put up the entirety of Kristin’s 1985, long-out-of-print book Exporting Entertainment. The combination of the original site and the blog gradually became a fairly monumental thing.

In part, the blog was an effort to amplify and extend the work of our textbooks, particularly Film Art. Hence the site was originally called “Observations on film art and Film Art.” But rather quickly the blog took on a life of its own. For me, as a recent retiree, it has become something of a substitute for my teaching, a way for me to try to communicate my ideas, old and new, to a receptive audience. The site, blog plus essays, functions rather like a self-published magazine, in which we can write about whatever we find curious or compelling in the world of cinema.

We found that our research has proven of interest to a surprisingly large audience. Last week, the site’s total lifetime pageloads surpassed three million. We have had nearly two million unique visitors and almost half a million returning visitors. So far this year, we’ve been very encouraged by the attention given to Kristin’s two entries on the prospects for 3-D (here [3]and here [4]), my entry [5] on eye behavior in The Social Network, and above all Tim Smith’s guest blog [6] on his eye-scanning experiments. Tim’s striking videos were downloaded, from our site and others that picked them up, over 720,000 times in ten days.

What about our working and writing methods? Could we adjust to the constraints and opportunities of the Net? Here the main arena was the blog. It began with festival communiqués from our ever-popular destination, Vancouver, but shortly it turned into something else. The occasion of a screening or lecture spiraled into a consideration of more general issues. A philosophers’ conference [7] teased me into trying to explain some aesthetic questions that had relevance to film. The release of The Departed [8] led me to reflect on some broader aspects of Scorsese’s career, with results that some readers took issue with.

Rather soon, however, we no longer needed the nudge of an occasion to provoke an entry. Kristin took the initiative by writing an essay about how to understand box-office figures [9]—something that students should know but that would also be of interest to any filmgoer. Shortly occasion-based entries mingled with long-form essays on topics as varied as contemporary Danish films [10] and first shots in movies [11]. Sometimes the essays developed ideas we’d argued for in published work (such as my endless invocations of the idea of “intensified continuity” style), but no less often the blog encouraged me to try out new ideas. The format now seemed to me a perfectly reasonable outlet for fresh research, as with my studies of William S. Hart [12] and a long piece on flashbacks [13].

The experiments continued. Most of our books rely on arguments developed through frame enlargements from particular scenes. So we learned how to illustrate our online essays with frame grabs, which yielded the bonus of color. The next step was obvious: books. The University of Michigan had already made my Ozu and the Poetics of Cinema available as a pdf [14]. After Planet Hong Kong went out of print [15], I had the chance to create a wholly digital second edition [16]. I look forward to publishing my next books as electronic editions.

In 2006 I could never have predicted the complementary developments in our online work this year. A book originally printed gets new life in digital form. Essays originally online are now available in book form. Where it all leads, we don’t know. But it looks like more fun is ahead. 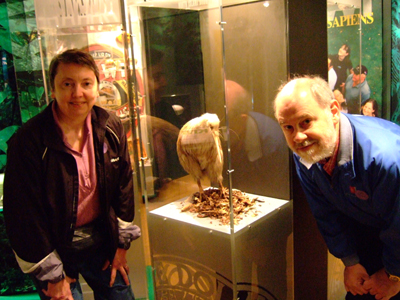 KT and DB learn about kiwis in Rotorua, New Zealand, 2007.

We had never created a book so quickly. Our neighbor Jim Cortada, a professional writer, calls Minding Movies a “free book” because it consists of material already published.

Of course, we had taken a lot of trouble over the entries during the preceding few years, but not with the intention of ever seeing them printed. Some we turned out quickly in response to something intriguing or silly or downright wrong that we saw on the internet. Those usually involved little more than looking up a few dates or names and coming to some conclusions about the issues involved. Others required days of research, with stacks of clippings and print-outs and piles of books with Post-its sticking out of their pages. Some entries involved the kind of intensive research that we would formerly have put into an article destined for an academic journal or anthology.

We wound up writing many entries that we didn’t think of as being as ephemeral as most web publications. The effort involved in keeping the blog going, though it happens in short bursts, does add up to a lot after four and a half years. (Collecting the many illustrations needed for some entries takes more time than the writing.)

David wants to explore the possibilities of online publishing, and I must say that having Exporting Entertainment, which was in print for a very short time, available again is satisfying. Still, if I believe something will be worth reading in years to come, I prefer hard print. So the opportunity offered by the University of Chicago Press to publish a selection from the blog was most welcome.

Choosing the entries to include wasn’t easy. Some of our most popular and substantive essays were the close film analyses. Yet those were precisely the ones which, as David says, web publication enabled us to use many illustrations. For print publication, we were more constrained, and for the most part we avoided those essays rather than publish them with only a few of their images. We selected a small number of the more heavily illustrated items: “Grandmaster Flashback,” “Unsteadicam Chronicles,” “Pausing and Chortling: A Tribute to Bob Clampett,” “Slumdogged by the Past,” and “A Welcome Basterdization.” To make up for such profligacy, we balanced those with entries that needed one or two or no illustrations.

We hope the result reflects some of the variety and range that the blog as a whole contains. One thing we discovered is that when you’re blogging, the kinds of things you’re inspired to write about far outrun the academic topics one chooses for formal articles in print. There’s also the chance to be topical in a way that the slow process of academic publishing doesn’t permit. And quite often writing for the blog can indeed be fun.

In a way we are following in the model of our friend Roger Ebert, who took to internet writing like the proverbial fish to water. Especially after the loss of his voice, he has reached an even greater and more devoted audience with his reviews and his reflective, often moving essays posted as Roger Ebert’s Journal [18]. Roger has supported our blog enormously by linking to and/or tweeting about some of our entries. He now has supported the book by providing a more than kind blurb for the cover. The book is dedicated to him and his wife Chaz. A month from now, we look forward to blogging from the thirteenth annual Ebertfest.

For the blog goes on. Even if Minding Movies attracts favorable notice and sequels become possible, we’ll never catch up in print to what we’ve done on the internet. After all, no book is really free. 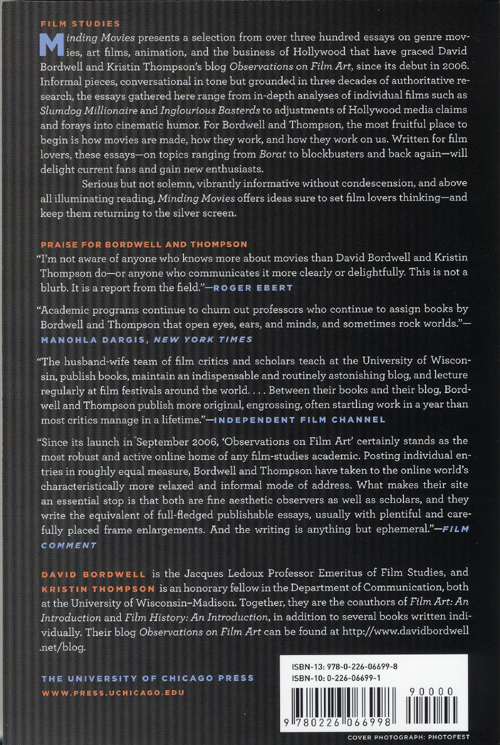