The newest installment [2] of our Criterion Channel series on FilmStruck [3] is now up. There I try to look at Chaplin’s Monsieur Verdoux (1947) from a fresh perspective: as a perverse contribution to the serial-killer cycle of the 1940s. You can sample it on the Criterion blog [4].

The killers inside them

When we say that we take up a new perspective on a film, or any artwork, what are we doing? I think the process involves at least two things. First, you need categories, some fresh conceptual groupings that allow for a perspective shift. Second, you relate the film in question to other particular films—that is, you pick prototypes of the categories. People don’t realize, I believe, the extent to which picking prototypes shapes our reasoning about nearly everything. (Is your prototype of a horror film Cat People, Halloween, or Saw? You’ll think of the genre differently.)

Take film noir. The category didn’t exist in 1940s Hollywood; no producer or director or writer set out to make a noir. A film might be a thriller, crime melodrama, even a horror movie. I discuss the elasticity of these categories here [5]. When French, then American critics started talking about film noir, they were creating a perspective shift. The new category “film noir” pulled together several aspects of films that hadn’t seemed so salient in their day: skepticism about orthodox authority, for example, or suspicion of women’s sexuality. Similarly, the critics elevated certain films, like Double Indemnity and The Big Sleep and Possessed, to the status of prototypes, and less vivid examples were situated in relation to them.

Something like this perspective shift occurred to me when I was writing my book, Reinventing Hollywood: How 1940s Filmmakers Changed Movie Storytelling. I tried to come up with some categories that could show continuity and change in film narrative of the period. I looked for strategies of plotting and narration that cut across received categories like genre. Among the categories I explored are block construction [6], multiple-protagonist plots, subjective viewpoint, non-chronological story sequence [7], voice-over narration [8], and others. Some had come to be associated with certain genres (thanks again to prototypes), but I found that they were quite pervasive. Several of these I’ve tried out on the blog [9].

Once I was peering through the lenses of these categories, my prototypes changed too. Now little-discussed films like Our Town (1940) and Tales of Manhattan (1942) and The Human Comedy (1943) and The Chase [10] (1946) became surprisingly central. I couldn’t ignore the classics, but they were now lit by a crosslight that brought out fresh aspects. And with these categories of narrative technique in mind, we can discover some new sides of well-known auteurs, like Welles, Hitchcock, Sturges, and Mankiewicz.

One broader category I tried out was that of “murder culture.” Mystery and suspense are perennial narrative appeals, but they took on new power in in fiction, film, and theatre of the Forties. (An early version of the chapter’s case is made here [5].) Part of murder culture was the rise of the serial-killer tale—not new in the 1940s, of course, but more common than in earlier Hollywood eras. Films like Shadow of a Doubt (1943), The Lodger (1944), Bluebeard (1944), Hangover Square (1945), Lured (1947), Follow Me Quietly (1949), and others became prototypes for my purposes.

Then Monsieur Verdoux appeared in a new light. What better evidence of the pervasiveness of murder culture than the effort by the most-loved film star in history to play a serial killer? 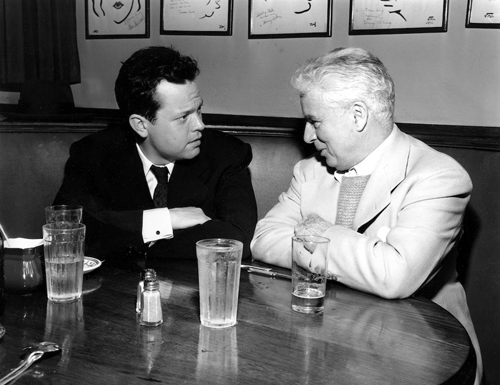 It was Orson Welles who prompted Chaplin to make Monsieur Verdoux. Welles was a thriller fan. He carried a trunkload of crime novels around on his travels. One of his early RKO projects was an adaptation of Nicholas Blake’s Smiler with a Knife, and after the debacle of It’s All True, his work as a freelance director consisted of thrillers (The Stranger, The Lady from Shanghai, Mr. Arkadin) and Shakespeare adaptations (Macbeth, Othello). Indeed, he treated Shakespeare’s plots as thrillers, in accord with his belief that the Bard wrote not classical tragedies but blood-and-thunder melodramas.

According to biographers, Welles wrote a screenplay based on the wife-murderer Landru and offered the role to Chaplin. Chaplin at first accepted, then decided to direct the film himself and bought the idea from Welles. There was apparently some dispute about giving Welles credit; early prints are said to have lacked acknowledgment of Welles’ idea as the source.

By late 1941, the trade press reported that Chaplin was preparing the film, then called “Lady Killer.” A year later, it was still discussed as a “plan.” Chaplin didn’t finish the screenplay until 1946, and the film was shot between May and September. By then it was entitled “A Comedy of Murders,” although Chaplin toyed with “Bluebeard” and “Bluebeard Rhapsody.” It wasn’t released until spring of 1947.

This long gestation period is significant because when Chaplin started, the idea of a comedy about killing would have been fairly fresh. By the time Verdoux was released, however, Arsenic and Old Lace (1944) and Murder, He Says (1945) had already shown that audiences would accept humor mixed with homicide. The original stage production of Arsenic and Old Lace had opened to great success in January of 1941, and it’s interesting to speculate that it might have encouraged Chaplin to buy Welles’ Landru idea.

Both Arsenic and Murder, He Says treat murder with a consistently farcical tone. I suggest in my FilmStruck Observations episode that Chaplin risks something more complex. For one thing, he takes the conventions of the serial-killer film more seriously than the other films do. He goes on to amplify and exaggerate those conventions in fascinating ways. For instance, he makes the policemen more or less stick figures, so we don’t care if they’re in jeopardy. In turn, Verdoux tries to win our allegiance through clumsy efforts to be debonair. (Uncle Charlie in Shadow of a Doubt is far more poised.) Chaplin’s use of the cycle’s conventions gets pretty specific. There were dead narrators [12] in 40s films before Sunset Blvd. (1950), but we tend to forget that Chaplin uses the same device in Verdoux.

Going further, I discuss how Chaplin’s treatment of serial killing mixes different sorts of comedy—social satire and slapstick, the traditional comedy of manners and the comedy of ideas associated with George Bernard Shaw. This mix is rather discordant, and it’s responsible, I think, for much of the criticism the film attracted, then and now.

The Tramp as provocateur

Verdoux failed in the US for several reasons. Reviews were mostly unsympathetic, even harsh. Chaplin had been back in the headlines thanks to a messy paternity suit filed by Joan Barry. His reputation as a seducer of young women had unpleasant associations with Verdoux’s conquests. He was also known for his support for liberal causes and his strong stance against fascism. After the war, he was more and more reviled by right-wing politicians and activists. Chaplin’s defense of civil liberties made him seem too much a Communist dupe, or an active sympathizer. Charles Maland has suggested that the film’s promotion completely mishandled Chaplin’s star image. 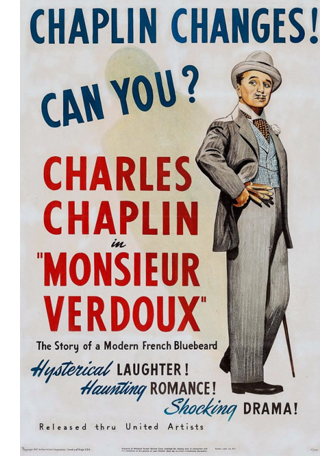 The disgraceful New York press conference on the film was chronicled in the New Republic:

He couldn’t have expected the shockingly rude, sustained impertinence of the attack that followed. Reporters were there, not to discuss his work with him, but to discredit and vilify and ridicule him personally—to hound him on his own opinions and habits. Was it true that one of his good friends (I am omitting names), a great musician, was a radical? Did this mean that he, Chaplin, condoned treason to this country, since his friend’s brother was accused of being a spy? Was Chaplin a Communist? Why, then, had he shown so little regard for the United States that, although he had paid taxes here for years, he was still a British subject? Even though two of his sons fought for this country in the war, and he did war work himself, why didn’t he do more? Exactly what percentage of his vast income made in the US had gone to alleviate the suffering of humanity?

While two perambulating mikes broadcast these questions and others, a swarm of cameramen set off lights in Chaplin’s face, so that in an hour he was not only knee-deep in spent flash bulbs, but practically blinded. His patience and courtesy were astounding, since his disgust must have at least compared to that of the few of us who could only be ashamed of what ugly, hostile liberties can be taken in the name of the freedom of the press.

The final scenes of Verdoux only heightened the suspicion that Chaplin was a danger to patriotic values. Soon he was subpoenaed by the House Unamerican Activities Committee, though he never testified. In 1952, after he and his new wife Oona left for Europe, his re-entry permit was rescinded. He went into exile in Switzerland.

The reviewers’ most common complaint was that the film refused to jell, but the film had eloquent defenders and brought forth some of the subtlest critical commentary of the period. James Agee, the only person to defend Chaplin during the press conference, wrote a famous three-part appeciation of the film that, I think, represents an early instance of in-depth film interpretation. Theatre historian Eric Bentley argued against those who found the movie a jumble of sentiment and slapstick. It was, he claimed, in the vein of Pirandello, where comedy gives way to the more philosophical mode, that of humor.

Reflection turns the merely funny into humor. . . . Thus, Pirandello argues, humor breaks up the normal form by interruption, interpolation, digression, and decomposition; and the critics complain of lack of unity in all humorous works from Don Quixote to Tristram Shandy—and we might add from Little Dorrit to Monsieur Verdoux.

Going still wilder, Parker Tyler speculated that in a parallel universe, Verdoux wasn’t executed. He abandoned his wife and son and took off on the road. Charlie the Tramp “had a past like anyone else. . . . Verdoux is . . . how Charlie came to be.”

Tyler’s flight of fancy isn’t surprising. This film can drive you a little nuts. It’s not ingratiating. It’s less perfect than provocative. It’s like the name itself, ver-doux, which translates as “sweet worm” or “gentle worm”—a little pleasant and a little creepy. The film is an obstinate thing that insists on being its contradictory self, not what you want it to be. For me, it’s perversely unlovable, and that unlovability is part of the Chaplin myth too. We should remember that the earliest Chaplin films show the Tramp as fairly nasty.

I suspect that Monsieur Verdoux can’t become a prototype; it flouts too many cherished categories. Or maybe the best category for it is that of experimental Hollywood movie. After all, the 1940s furnished more than its share of them.

Thanks as usual to Kim Hendrickson, Grant Delin, and Peter Becker of Criterion. Our complete Observations on Film Art Criterion series is here [13]. (I think you need to be logged in to see it.)

I’ve argued in The Rhapsodes that Agee’s critique displays the interpretive techniques borrowed from literary New Criticism. In the same book I discuss Tyler’s Chaplin book as an ultimate flight of performative criticism.  One consequence of 1940s murder culture was the crystallization of the suspense thriller, a genre that has flourished ever since, for several reasons [19]. 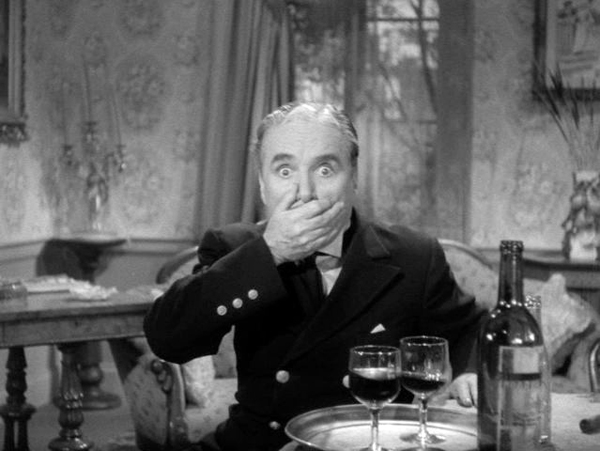