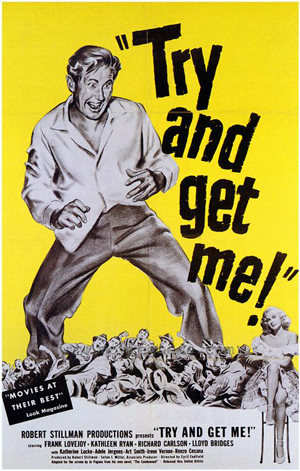 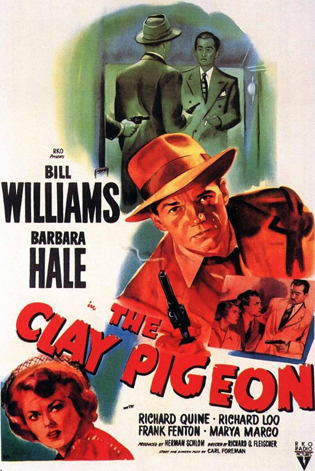 In The Sound of Fury (aka Try and Get Me!, 1951), Howard Tyler has drifted into crime under the guidance of a breezy sociopath. They commit a string of holdups, culminating in a kidnapping. Howard’s partner bashes in the skull of their young captive. Wandering drunk and despairing, Howard ends up in the apartment of Hazel, a lonely manicurist. As Howard lolls on the sofa, she turns away to switch off the radio.

The next move is up to us.

If we’re alert, we can spot, on the end table in the corner of the frame, a newspaper with a headline that may be announcing the police investigation. 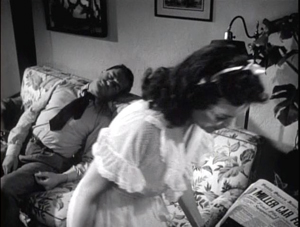 At first Hazel takes no notice. Will she? She does. She lifts the paper and is appalled. 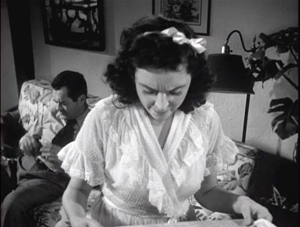 Hazel turns toward Howard. Now we can see the entire headline as she reads aloud: Police are intensifying the search. She hasn’t made the connection between her guest and the boy’s disappearance. 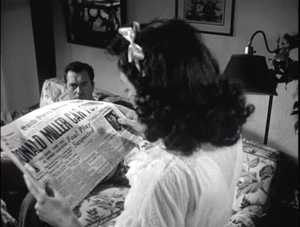 Panicked, Howard lunges at her and crumples the newspaper. 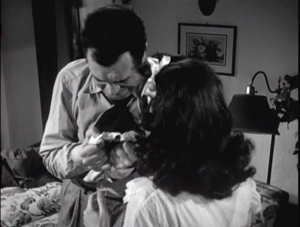 Will this display of shattered nerves tip Hazel off?

As in the bomb-under-the-table [7] model of suspense, at the start we know more than both characters know. She’s unaware of the kidnapping, and he’s unaware that the cops have found the victim’s car. In addition, the arc of suspense around the headline is quite small, though it leads on to something larger: Will Howard give himself away to the unsuspecting Hazel?

I’m impressed by the economy of presentation. Hitchcock might well have treated this moment in point-of-view shots, and a fairly protracted series of them. Or imagine how several filmmakers today would have handled this scene. There’d be a slow a track-in to the headline, then a circling camera movement that first concentrates on the woman picking up the paper, then racks focus to Howard on the sofa in the background.

Instead, director Cy Endfield makes very small changes of framing and staging matter a lot. The camera simply swivels, the actress simply comes to the foreground and pivots. The entire action, crucial as it will prove in what follows, consumes only twenty-five seconds.

Some stretches of a movie tend to be simply, barely functional: connective tissue or filler. Shots show cars driving up to places where the real action will take place, or characters striding down a corridor before going into a doorway. Other images want to engage us more deeply, but they do it through immensity. They try to awe us with majestic swoops over the sea or into the sky. (Recent example: Interstellar.) But other films engage us through detailing. They train us to notice niceties.

The Sound of Fury moment creates its detailing through visual space. What about time? And what about auditory factors? Our old friend, the telephone call, can furnish some examples. 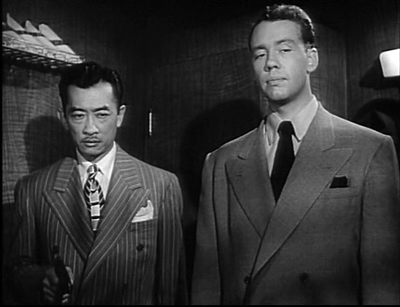 Filmmakers must always decide how much of any action to show. Sometimes that allows the director, the cinematographer, and the editor to create fine-grained delays. These might not build up a lot of suspense but they can make us uneasy, and prepare us for a surprise later down the line.

As we mention in Film Art, and discuss in a related blog entry [9], a telephone scene forces the filmmakers to choose among clear-cut alternatives. Do we see both parties? Do we see only one and simply hear the other? (And is the voice of the one we don’t see futzed?)  Do we see one and not hear the other at all? Most films don’t ask more than simple functionality, but even a B man-on-the-run feature like The Clay Pigeon (1949) shows what can be done with details of timing in setting up a phone call.

Jim Fletcher has war-related amnesia. He doesn’t know why he’s about to be court-martialed for treason. After escaping from the hospital, he learns that he is accused of betraying his best friend during their time in a Japanese POW camp. After convincing Martha Gregory, the friend’s widow, that he’s innocent, he searches for proof. The Clay Pigeon sticks mostly with Jim, but like most suspense films it slips in bits of unrestricted narration as well. Jim’s quest is tracked by mysterious men, and brief scenes give us glimpses of the forces pursuing him: agents of Naval Intelligence, and a gang of counterfeiters protecting the Japanese soldier who tortured Jim in the Philippines.

It’s the familiar structure of the double chase, dosed with minor mysteries. For example, when Jim gets a lead from a management firm, he leaves the office but the narration stays with the secretary who notifies her boss that Jim has been asking questions. 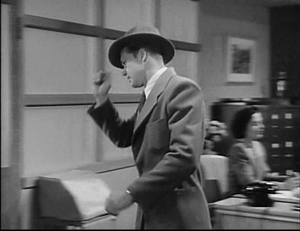 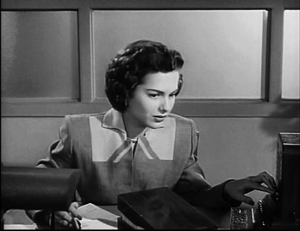 Cut to the executive’s office, where the camera reveals many stacks of wrapped bills on his meeting-room table. Something sinister is going on here, but what? 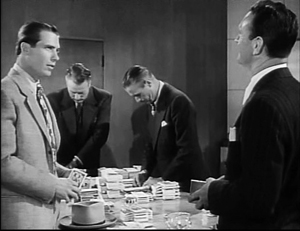 The decision to insert information addressed to us alone has more subtle consequences in two telephone scenes. Jim calls Ted Niles, another veteran of the POW camp. During these scenes, the filmmakers had the option of showing only Jim and never revealing Ted at the other end of the line. That tactic would have enhanced mystery, but it would have thrown suspicion on Ted. If he’s Jim’s friend and ally, why not show him?

So the filmmakers show Ted replying in his apartment. But later it will be revealed that Ted is working with the gang. The task is to introduce this important character in a way leaving open the possibility of his treachery. The solution the filmmakers hit upon is to show Ted just before he picks up the line. Here is the first instance, when Jim cold-calls him. 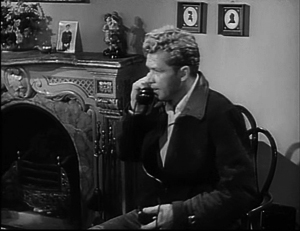 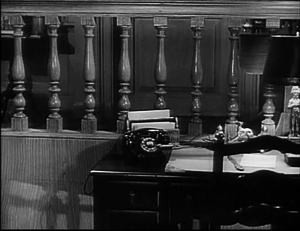 The camera shows Ted innocuously answering the phone and learning, to his surprise, that Jim has tracked him down. 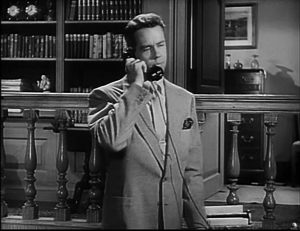 At first Ted seems annoyed, but then he smiles and agrees to help. 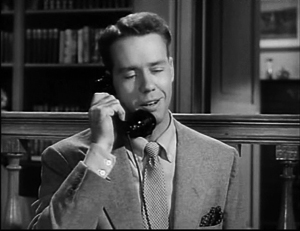 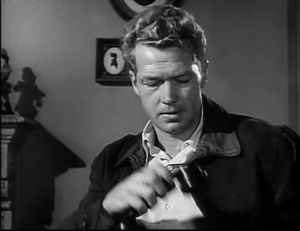 The scene ends on Jim hanging up. If we wanted to plant more suspicion of Ted, we’d show him hanging up too and reacting to the call.

A later scene starts much the same way, with Ted coming in to answer a ringing phone and getting a message from Jim. 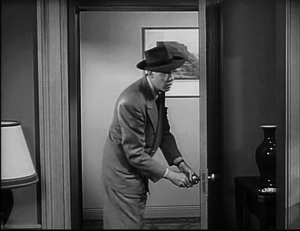 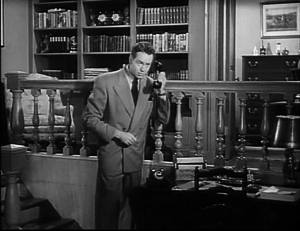 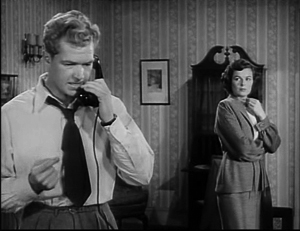 Both scenes show Ted answering the phone in a completely innocuous way. Yet the very fact of dwelling on his action of coming to the phone can be seen as planting uncertainty. In the second scene, for instance, where is he coming from? And in both scenes, Ted frowns at certain points. Perhaps he is pondering ways of helping Jim, but the expressions leave open the possibility that he is plotting against him. Ted’s duplicity is fully revealed only at the climax. (See image surmounting this section.)

In a mystery situation, a few seconds showing Ted alone gain a force they wouldn’t have in another genre. Some viewers will be surprised, some will say they knew it all along, but either way the detailing of a moment here and there has opened the possibility.

The Clay Pigeon telephone scenes show the speakers in alternation. The give-and-take of the conversation is presented by cutting back and forth. Another option is simply to show one speaker and let us hear the other without seeing him or her. As we’ve noticed, though, that would tend to make Ted a more mysterious figure.

Yet another possibility is the silent treatment: One speaker is shown talking, and we don’t hear the other at all. This option forces our attention wholly onto the reaction of the person we do see, and keeps us in the dark about the words and tone of voice of the person at the other end of the line. If the Clay Pigeon telephone calls presented Ted this way, that  would be another tipoff.

Still, suppressing one half of the conversation can pay dividends when we already know the characters. At the climax of Humoresque (1947), detailing involves not a prop or a passing moment. Instead, a simple cut accentuates the shift from one sound space, that of violinist Paul Boray’s dressing room, to another, the luxurious living room of his lover Helen Wright. When he gets her call, he can’t understand why Helen isn’t at his big concert. But she is distraught because her own worries about keeping Paul’s love have been reinforced by Paul’s mother, who insists that she’s no good for him. And Helen is drinking again.

The scene’s tension is ratcheted up by first presenting only Paul’s angry questioning. We don’t hear Helen’s replies. When the dramatic momentum shifts to Helen’s desperate excuses for missing the concert, we concentrate on her meltdown more intently because now we don’t hear Paul’s replies. Her emotional response is magnified by the yearning climax of Tchaikovsky’s Romeo and Juliet Overture on the radio broadcast–another reason to suppress Paul’s voice.

The scene has been split between Paul’s end and Helen’s. By not seeing Helen’s reaction to his urgent questions, we wonder what is keeping her away. Like Paul, we’re unaware of her torment. But then we see and hear her, and our inability to know what he’s saying makes his pleas seem ineffectual. Whatever he’s saying doesn’t seem to matter. A simple speaker/listener cut raises the scene to a new pitch, which will build still further when we follow Helen out onto the terrace. One more detail, brutal: We don’t hear Paul’s voice, but we do hear the click when he hangs up.

One thing that links all these Little Things: What the filmmakers did not do. Cy Endfield did not indulge in camera arabesques or POV cutting. Richard Fleischer and his colleagues did not suggest Ted’s duplicity with music or a noirish shadow. Jean Negulesco and company didn’t yield to the temptation to crosscut furiously between a panicked Paul and an anguished Helen. These directors did something rare today. They presented the situation with stylistic simplicity. That way the big moments–the revelation of Ted’s treachery in the train, the frenzied mob in The Sound of Fury, the all-enveloping climax of Helen on the beach–become more vivid. Big things need little things to seem bigger.

Thanks to Jim Healy, who introduced me to The Sound of Fury and The Clay Pigeon.

For more on the bomb under the table, see the followup entry here [20].

Lest someone think I’m dumping on Nolan, let’s just note that he can, when he wants, summon up niceties [21]. (By the way, thanks to readers for hustling to our Nolan vs. Nolan entry, [22] but they should read the one on The Prestige and our Inception series here [23] and here [24] to get a fuller sense of our estimation of him. All of these are put into reader-friendly order in an insanely inexpensive ebook [25]…..)

Several other blog entries consider detailing in performance: Henry Fonda’s hands [26], Bette Davis’s eyelids [27], and the facial expressions in The Social Network [28]. I’m still mulling an entry on eyebrows, which are terribly underrated. For another Joan Crawford tour de force, there’s this [29]. 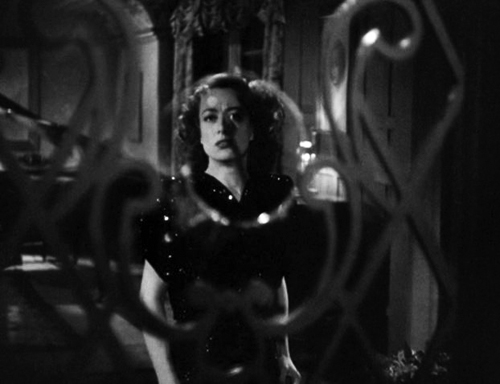