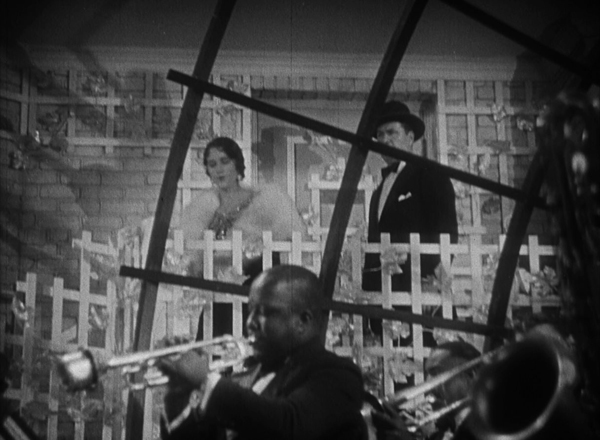 In my entry on the ten best films of 1929 [2], I suggested that that particular year, hovering as it did between silents and talkies, was relatively poorly represented on home video. Now Kino Lorber has released two films from that year that both entertain us and contribute to our knowledge of the late 1920s cinema.

In that entry I lamented the fact that Josef von Sternberg’s marvelous early talkie Thunderbolt had not had a proper DVD or Blu-ray released. I expressed hope that one of the home-video companies specializing in historically important classics would finally make it available. The Kino Lorber release finally allows historians and cinephiles access to this little-known masterpiece.

If Thunderbolt was a legendary film that called out for such a release, the 2012 Friedrich Wilhelm Murnau Stiftung restoration of Kurt Bernhardt’s The Woman One Longs for reveals this previously forgotten film to be, if not a masterpiece, a very good film. It’s also completely typical of a trend of the late 1920s that I have termed the International Style.

Coincidentally, von Sternberg and Dietrich, so closely connected in our minds, link the two releases. Thunderbolt was the director’s last film before beginning his series with Dietrich, and The Woman One Longs for was Dietrich’s last (and first) starring roll before she worked with von Sternberg for the first time.

I’ll deal with it first, since I don’t want it to be overshadowed by Thunderbolt.

The Woman One Longs for 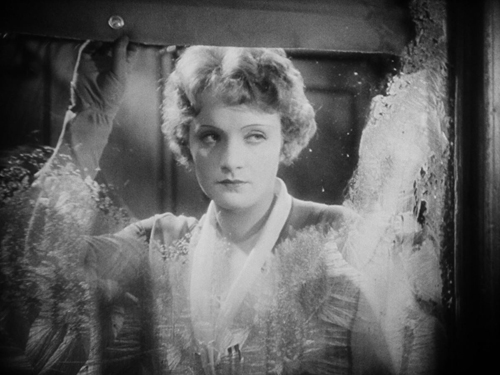 The standard story has Marlene Dietrich claiming that The Blue Angel was her first film. Seemingly she wanted to suggest that von Sternberg’s use of her in a series of star vehicles created her career. The image above, of her staring through a frosty train window, might easily be mistaken for a von Sternberg shot. In fact it’s from her previous film, The Woman One Longs for (Die Frau, das der man sich sehnt, aka The Three Lovers), directed by Bernhardt.

The Jewish director barely made his escape from the Nazis, working during the 1930s in France and then shifting to Hollywood. There, under the name Curtis Bernhardt, he made many films up to the 1960s, perhaps most notably the Joan Crawford psychological drama Possessed (1947) and the Rita Hayworth vehicle Miss Sadie Thompson (1953). That was an adaptation of Somerset Maugham’s “Miss Thompson” (previously filmed by Raoul Walsh as Sadie Thompson, starring Gloria Swanson, in 1927 and by Lewis Milestone as Rain [a new title that had replaced the original name of the short story], starring Joan Crawford).

The plot of The Woman One Longs for is straightforward melodrama. The protagonist, Leblanc, is expected to rescue his family’s factory, tottering on the brink of bankruptcy, by marrying a wealthy heiress who loves him but who leaves him cold. He marries her, but on their honeymoon trip aboard a train to the south of France, he suddenly becomes fascinated by a mysterious beauty, played by Dietrich. She seemed to be under the sadistic control of Dr. Karoff. The latter is played by the great actor of the Expressionist theater, Fritz Kortner, familiar to most modern spectators as Dr. Schön, who keeps Lulu as his mistress in Pandora’s Box (also 1929). Leblanc becomes obsessed with saving Dietrich from her captor.

The plot is entertaining enough, but the real interest in the film, at least for David and me, is Bernhardt’s direction. It’s quite skillful, even flashy. Moreover, Bernhardt had clearly been seeing many of the major films of the 1920s from Germany, the USSR, and France. Like many other directors of the late 1920s, he blends them seamlessly into what I have called the “International Style.” (See Chapter 8 of Film History: An Introduction.)

The film starts in a setting done in a style familiar from many German films of the era, with a camera following a character through an atmospheric, faintly Expressionist street clearly built in a studio (below left). Even after the Expressionist movement ended in early 1927 with Metropolis, German films continued to use settings influenced by the style to represent old buildings or poor neighborhoods. Compare the opening shot of The Blue Angel (below right), the only Expressionistic setting in the whole film. 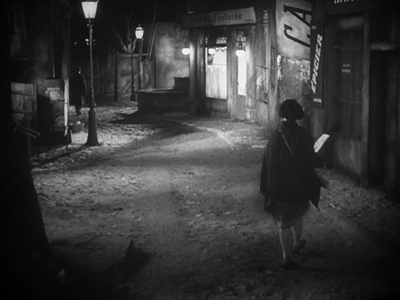 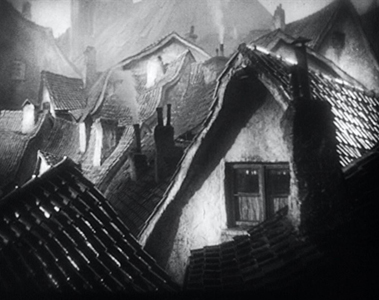 But Bernhardt has seen Soviet films as well. The early montage establishing the Leblance family’s factory uses the quick cutting, dramatic angles, and dissolves that such scenes have in so many Soviet and European films of the era (below left). A fight scene between Leblanc and Karoff uses fast editing, canted compositions, and camera reframing (below right). 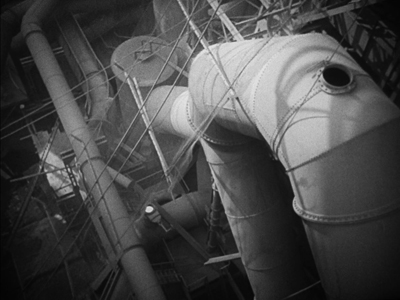 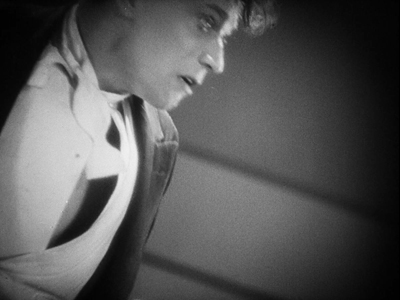 Bernhardt has almost certainly seen L’Herbier’s L’Argent [8]of 1928, with its streamlined sets (left) and low-angle framings shot with wide-angle lenses (right). Compare the latter with the low-camera-height shot of the Paris Bourse at the top of the L’Argent section in the 1928 entry linked immediately above.) 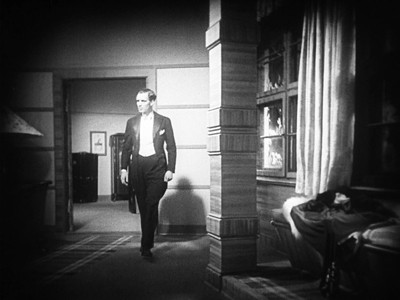 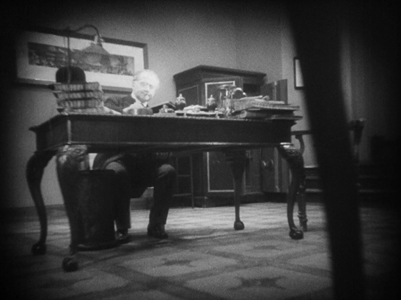 Bernhardt had also clearly seen Underworld, for the New Year’s party that forms the climactic scene of his film imitates von Sternberg’s party scene fairly obviously. The action centers around the two main male characters’ struggle over the heroine, with two count-downs raising the suspense: the beauty contest in Underworld and the approaching midnight signalling the new year in The Woman One Longs for. The hanging streamers that increasingly dominate the setting are, however, the giveaway for von Sternberg’s influence on Bernhardt (see bottom).

Speaking of influence, there is a moment in the party scene when the drunken Kaross pops a startled child’s balloon with a cigarette. Maybe this is a common trope in films, but the only other example I can think of is Bruno’s similar gesture of casual cruelty in Strangers on a Train. 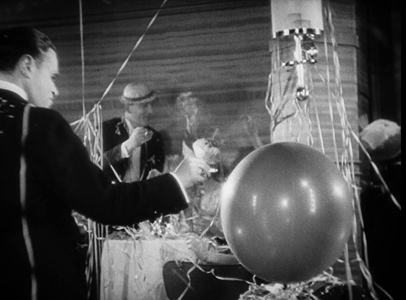 The Woman One Longs for also contains a reference that we might today call an “Easter egg.” [12]At the end, Karoff is arrested in the luxury hotel where the three main characters have been staying and where the New Year’s party take place. The manager insists that in order to avoid a scandal, the police must escort him out of the building via the “Hintertreppe” (backstairs). One of Kortner’s major roles had been the devious, obsessed postman in Leopold Jessner’s Hintertreppe [13] (1921), one of the few other classics by which Kortner is known today. 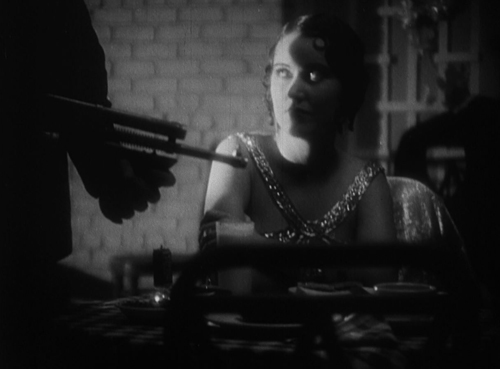 I have already sung the praises of von Sternberg’s pre-Dietrich films on this blog. I find his naturalistic first feature, The Salvation Hunters (1925) heavy-handed, but with Underworld (1927) he abruptly hit his stride. To me it and The Docks of New York (1928) are his masterworks–those and Shanghai Express (1932), arguably the best of his Hollywood Dietrich films. The Last Command (1928) is excellent but not up to that level. I discussed these three [15] when The Criterion Collection released them as a set in 2010. That set went out of print but is fortunately now  available in Blu-ray [16]. I put Underworld in my ten-best list for 1927 [17] and The Docks of New York in the 1928 list [8]. As I mentioned at the outset, Thunderbolt made the 1929 list [2].

There I briefly discussed the remarkable compositions and use of offscreen sound in the lengthy prison scenes of the title character on Death Row. Watching the new Blu-ray in preparing this entry, I was struck even more by the early scene in the Black Cat, a Black-run nightclub where we are introduced to Thunderbolt and his relationship to Ritzie, the heroine. As in the silents, von Sternberg’s habit of staging compositions with obstructing objects in the foreground is apparent. Note the entrance of Thunderbolt and Ritzie with a set element both framing and obstructing them (see top). Later a scene as two patrons of the club gossip about Thunderbolt partially blocks the faces, particularly of the one on the left. 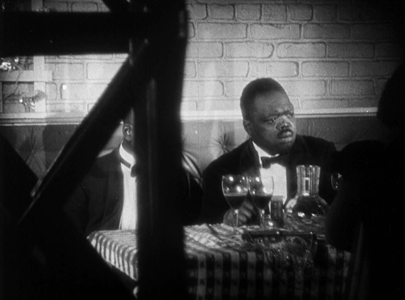 The whole scene is marvelously enhanced, as I said in my 1929 entry, by the inclusion of Theresa Harris’ complete rendition of “Daddy, Won’t You Please Come Home.” It’s hard to think of another mainstream Hollywood film in which a Black cultural situation is used so naturally and with so much respect. 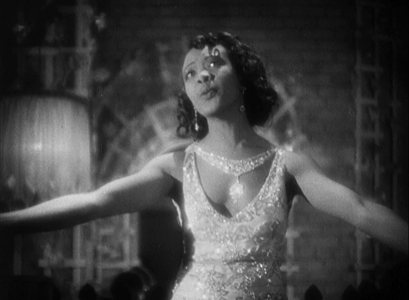 The Black Cat sequence ends with a police raid on the club. The cinematography at this point is pure film noir. (See image at the top of this section.)

As I said in the earlier entry, the one flaw in the film is the tepid central couple played by Richard Arlen and Fay Wray. Given the excellence of the Black Cat sequence and the lengthy prison scenes, that flaw is minor indeed. 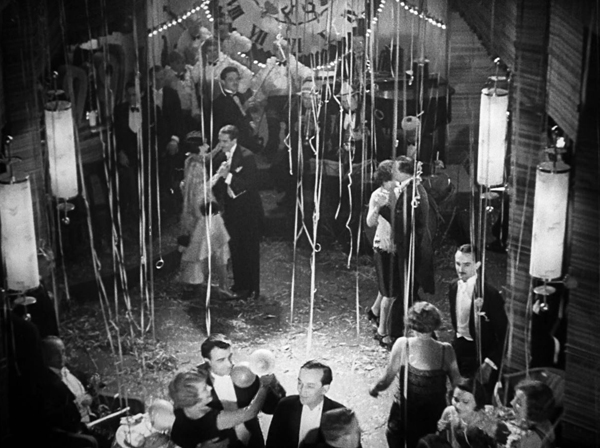