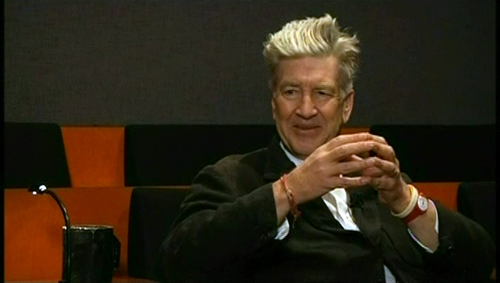 David Lynch in the documentary Side by Side. 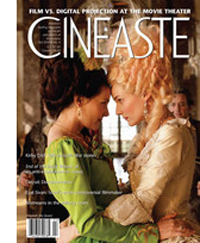 [2]On digital cinema: Cineaste magazine has published a wide-ranging “Critical Symposium on the Changing Face of Motion Picture Exhibition” in its most recent issue [3]. It gathers in-depth reflections from Grover Crisp, the Ferroni Brigade, Scott Foundas, Bruce Goldstein, Haden Guest, Ned Hinkle, J. Hoberman, James Quandt, D. N. Rodowick, and Jonathan Rosenbaum. I add some comments too. A preview is here [4], but the responses are available only in the print edition. That edition also includes two signature Cineaste interviews, this time with Kirby Dick and Eyal Sivan, along with another symposium of great interest, devoted to film editors’ response to the rise of digital postproduction. As regular readers know, the series [5] I composed on digital projection, Pandora’s Digital Box, has been revised and turned into an e-book [6].

As for digital production, that’s the center of the new documentary film by Christopher Kinneally called Side by Side [7]. It has played several festivals and is now available on Pay Per View via Tribeca. I think it’s a balanced, lucid introduction to the pros and cons of shooting digitally, as well as a helpful historical overview of the development of cameras and capture systems. It includes interviews with Scorsese, Lynch, Cameron, Fincher, and many other directors, along with a wide selection of editors and cinematographers. (DP Geoff Boyle adds some especially salty comments.) Side by Side is especially strong on post-production; how often do you get comments from Digital Colorists? There’s a little bit about exhibition too. Keanu Reeves makes a well-informed and unobtrusive interviewer. In all, the film would be a very good teaching tool in introductory courses. Kinneally discusses the project at Filmmaker [8].

I was a little surprised by the popularity of my entry on Cinerama [9], written in response to Flicker Alley’s magnificent release [10] of This Is Cinerama on Blu-ray. Now there’s a podcast by David Strohmaier, the moving force behind reviving interest in the format. See The Commentary Track [11]. Speaking of Cinerama, Kristin and I enjoyed our visit to Seattle’s Cinerama Theatre [12], where we saw The Master in 70mm. The theatre has been magnificently restored to its 1960s glory, Populuxe [13] decor and all. Occasionally three-panel Cinerama films are screened there. And I should mention that while I was yearning from afar, the Cinerama Dome in Los Angeles held a festival [14] earlier in the fall. 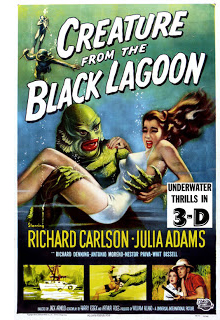 [15]LIke Cinerama, classic 3-D holds perennial fascination, especially for baby boomers like me. I was lucky enough to see the digital restoration of the stereoscopic version of Dial M for Murder at the Toronto International Film Festival [16], and I wrote about it here [17]. Bob Furmanek, expert in the format, provided an in-depth discussion [18] of it on his site, 3-D Film Archive [19]. Now Bob and Greg Kintz have added an equally intense backgrounder [20] on The Creature from the Black Lagoon. As Bob writes to me: “Only 48 more Golden Age titles to go!”

Now that Dial M is available in a 3-D Blu-ray disc [21], I think it’s worth mentioning that this is something of a milestone for film analysis. When I was first studying 3-D in the early 1980s, it was almost impossible to see vintage films in the format. Although archives held copies, those were typically flat versions. Even if the archive had both the A and B films, they would have been very difficult to screen. Worse, it would have been impossible to study 3-D shooting using the major tool at my disposal, the 35mm flatbed viewer. Now, viewers with 3-D TVs and 3-D players, can study Dial M and Creature shot by shot [22], even freezing frames [23] to examine exactly how the shots are designed. This isn’t usually mentioned as a benefit of the new technology, but digital restoration and displays let us examine movies in 3-D in unprecedented detail.

In July I reviewed the local fracas [24] over our old picture palace, the Orpheum. Things were quiet over the summer, but now it’s all up for grabs again. The promised foreclosure is in the offing, followed by interim management from the team that handles Lollapalooza and Austin City Limits. The Wisconsin State Journal‘s Steve Elbow brings us the news here [25] and here [26].

Finally, the video essay on constructive editing [27] in our previous entry has attracted some compliments, for which we’re grateful. Its discussion of the Kuleshov effect has led some to ask us whether the several videos [28] on YouTube are authentic footage of Kuleshov’s experiments. Alas, they are not, but Kristin and I don’t know their provenance. However, in Oksana Bulgakowa’s documentary on the Kuleshov effect, available on YouTube [29], there are some fragments of the surviving footage, starting at 4:28. Oksana has also helped complete the experiment by inserting a substitute for a missing shot. In addition, I’m reminded by Joe McBride and Katharine Spring of Hitchcock’s famous explanation of the Kuleshov effect, available on the DVD, A Talk with Hitchcock [30]. An excerpt from that is posted on YouTube [31], probably illegally.

P.S. 11 November 2012: Jay Rath of Isthmus presents another, more optimistic account [32] of the past and future of the Orpheum. 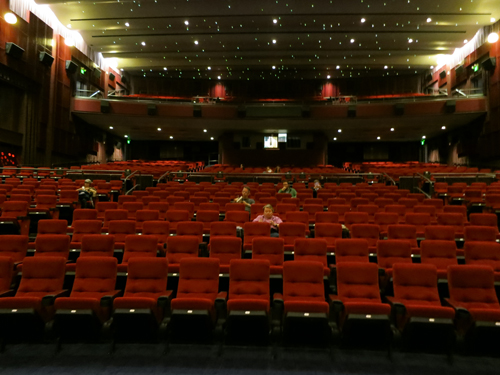