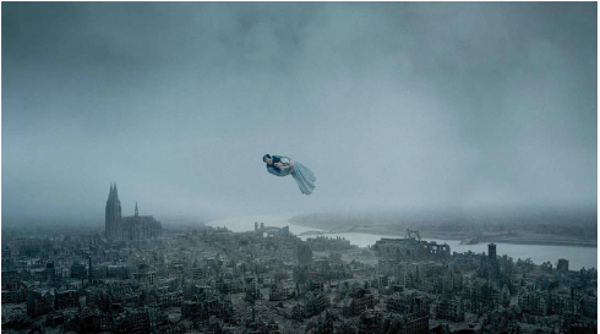 In the midst of the frenzy of fast cutting in films of the 1990s, a few directors reminded us of the virtues of simply putting your camera on a tripod and letting the action unfold in front of it. Abbas Kiarostami, Hou Hsiao-hsien, Kitano Takeshi, Tsai Ming-liang, and several other filmmakers reminded us that the fixed camera and long take, i.e. the “theatrical” cinema so despised in the 1920s and 1930s, still harbored great expressive resources.

It’s a lesson we have to keep learning–with Warhol and Tati in the 1960s, Akerman and Duras and Angelopoulos in the 1970s, Iosseliani in the 1980s, and not least with one of the greatest exponents of the tendency, Manoel de Oliveira. His 1963 film Rite of Spring initiated his persistent, endlessly inventive exploration of the tableau shot. Doomed Love (1978; briefly discussed here [2]) is a superb example; Francisca (1981) is another, and we were lucky to catch a superb restoration on display in the Venice Classics section. I hope to write about it soon!

After four years of production, Roy Andersson’s Songs from the Second Floor was released in 2000 and established his distinctive approach to the tableau tradition. Since then he has made only three features, the most recent of which played in competition at Venice 76. Of course we had to see it, and to visit his press conference.

This is visionary cinema of a unique kind.

Landscapes of unhappiness, minor and major 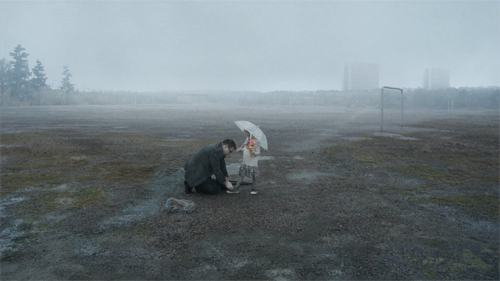 Start with some brute facts. About Endlessness [4] runs only seventy minutes (without credits), and it consists of 32 one-shot scenes. As in Anderson’s other films since 2000, most scenes stand alone, without narrative connection to others.

Some are bare-bones situations, as when a young man watches a young woman watering a plant, or when a father ties his little girl’s shoe in a rainstorm. Others unfold a dramatic crisis. A man bursts into tears on a city bus, complaining that he doesn’t know what he wants. A dentist, put off by a patient’s yowls of pain, simply walks out of the consultation and ends up in a bar.

Some shots draw on our knowledge of a broader story, as when Hitler stalks into one chamber of his bunker and his lieutenants, exhausted by the bombardment, sporadically salute him. He hardly seems to notice. A few tableaux present a recurring thread, like minimalist running gags. A man recognizes a schoolmate, but wonders why the man won’t greet him. A priest feels himself losing his faith, gets drunk while celebrating mass, and consults a doctor for advice. And one recurring image shows a woman cradled in a man’s arms floating in the sky–at one point drifting over the ruins of the bombed Cologne of World War II.

What makes Andersson’s cinema so fascinating is his effort to design intricate, gradually unfolding compositions that harbor powerful emotional expression. Dialogue is at a minimum; objects are arranged with the precision of still lifes. His people are often doughy and plodding, with hangdog expressions and complexions like pumice, living in a world dominated by grays and pastel browns. His movies reveal how many shades of beige there can be.

The grandeur of the distant framings accentuate the impotence of the characters. These sad creatures are caught in strict, unsympathetic perspective, all sharp angles and endless vistas. They stand exposed by flat, minimally sculptured lighting. “I avoid shadows,” he explained at the press conference. “I want to make pictures where people can’t hide. A light without mercy.”

The same mercilessness is seen in the settings, which may look fairly naturalistic but are wholly artificial. Andersson uses miniatures, background painting, and digital effects to create his picture-book landscapes. Streets, cities, train platforms are all the product of years of preparation. Like Tativille in Jacques Tati’s Play Time, Andersson’s sets create a beguilingly realistic version of a wholly fake city.

The sets are calculated to make sense from a single vantage point, as Renaissance paintings are. In a shot like the first one below, moving the camera would reveal the forced-perspective buildings outside. 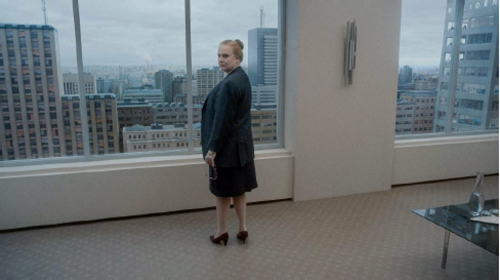 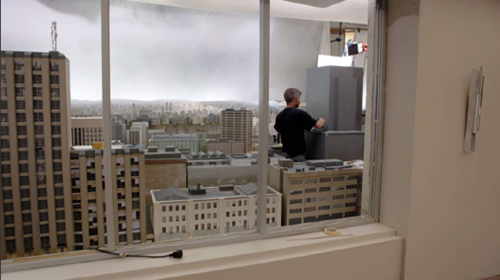 Some of these landscapes are as eerie as de Chirico’s, but without any of the sensuous shading.

Which means that posture, gesture, and objects near and far have to carry the drama, however anecdotal it may be. The man who thinks his old friend has snubbed him tells us that the friend has a Ph.D. His wife consoles him (after all, they’ve been to Niagara Falls), but he’s still anxious. His puzzled fretfulness is carried by his slumped bearing, his plaintive expression, and his clinging to his slotted spoon. Meanwhile we hear his pasta simmering ever more loudly in the kettle in lower frame right, a light objective correlative to his annoyance. 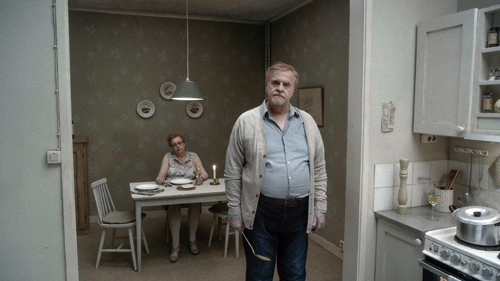 Andersson teases us by letting us imagine how a micro-story might unfold. In a cafe, a woman sits alone, with no drink in front of her. She’s in the classic posture of waiting, A man eats dinner behind her (his cutlery clinks) and an empty table on far right bears the traces of another customer. In comes a large, lumpish fellow brandishing a bouquet. He hesitantly asks for Lisa Larsson. So it’s a rendezvous? 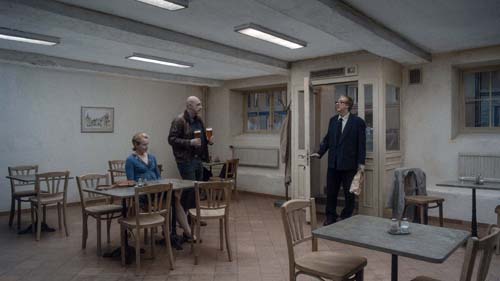 The lady doesn’t admit to being Ms. Larsson. Maybe she really isn’t, or maybe she found a better date. In any case, the newcomer turns and leaves, a bit sadly. Of course, there’s always the possibility that the absent customer on the right was his date. We, and he, won’t know.

Note, in passing, Andersson’s use of classic staging techniques. Tableau cinema needs to guide our attention through pictorial tactics such as central placement, frontal positioning, and patterns of blocking-and-revealing. By giving the bald man a central position in the format and letting him mask our view of the man eating in the corner, Andersson makes sure we’ll register the confrontation between him and the intruder.

Most of the tableaux are accompanied by a brief voice-over, a woman saying, “I saw…” followed by a single-sentence description of the action. Andersson claims to see her as a bit like Scheherazade, but she has as little commitment to a full story as he does. Her narration provides very little judgment on the scene but does supply a bit of information–often grim, as when we learn that a busker lost his legs in combat.

Indeed, war is a recurring motif in the film, making it bleaker than any of the other Andersson films I recall. Now the minor miseries and absurdities of modern life sit along a continuum of death  and destruction. A sequence of spontaneous dance here, a father’s awkward love for his daughter there–these don’t wholly compensate for a wartime execution or the bombing of Dresden. The gags are fewer now, and Andersson’s fantastical but stubbornly tangible cities have never looked more oppressive. The idea of endlessness stretches in many provocative directions: the infinite vistas of city and sky, the pinpricks of guilt and frustration in everyday life, the obscene endlessness of war. Lucky are those who can in a gentle embrace float above it all.

Andersson’s last film, A Pigeon Sat on a Branch Reflecting on Existence, won the Golden Lion for Best Film in Venice in 2014. Maybe this one will too? It’s one of the best new films I’ve seen here this year. More on the others, in later entries!

Thanks to Paolo Baratta and Alberto Barbera for another fine festival, and to Peter Cowie for his invitation to participate in the College Cinema program. We also appreciate the kind assistance of Michela Lazzarin and Jasna Zoranovich for helping us before and during our stay.

We’ve written bits on Andersson’s films elsewhere in our blog entries [9]. See our entries on tableau staging [10]for lots more on how this stylistic approach works. I discuss the technique as well in On the History of Film Style and Figures Traced in Light: On Cinematic Staging. 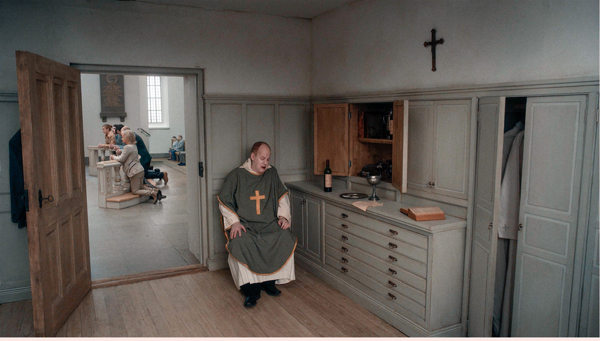