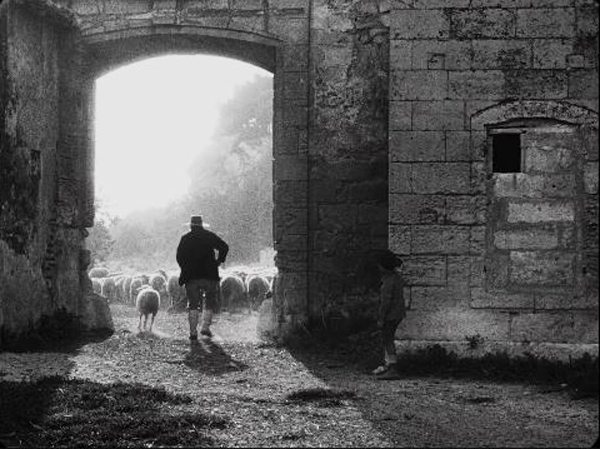 Like so many of our fellow festival-goers, David and I were not able to visit Bologna for Il Cinema Ritrovato [2], the annual festival of restored films and curated thematic threads. Fortunately the organizers made a selection of the films and events (interviews, discussions of films by archivists) available online.

We were not able to watch all of these, so we concentrated on an area in which we have both worked, French silent cinema. There were three of these, or six if you count the four episodes of the 1927 serial, Belphégor. They were beautiful restorations, all presented in black and white. (I must admit, beautiful though tinted and/or toned films are, I prefer the black-and-white versions. That’s mainly because if one is taking frame enlargements for reproduction in black and white in a publication, it is often impossible to get a decent copy from a tinted print.)

No doubt it is frustrating to read about films that are unavailable to see outside archives. Still, some of the Cinema Ritrovato films travel after their presentations at the festival, and some appear on DVD/Blu-ray. These are three to keep an eye open for. 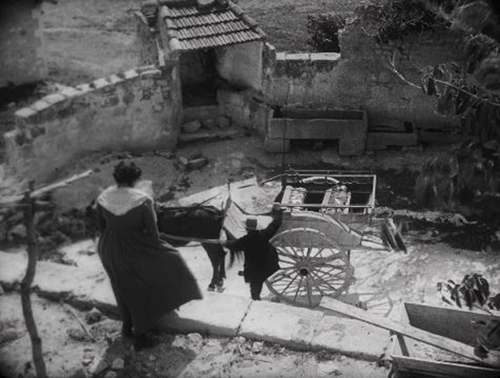 I must admit, this was the only title of the three that I recognized. David and I had been very impressed by André Antoine’s earlier films. (See our brief comments on and some frames from his extraordinary 1917 Le coupable here [4] and here [5].)

While Le coupable was a courtroom melodrama set in Paris, L’Arlésienne follows his 1921 naturalistic film La terre by being shot in the French countryside. In this case the story takes place in and around Arles, at that time a village in the south of France, not far from the Mediterranean coast northwest of Marseilles. The familiar tale concerns the family of Rose Mamaï, a widow who runs her large farm, aided by her cheerful, naïve son Frédéri, who seems destined to marry Vivette, from a nearby farm, until he falls under the spell of the unnamed title character.

The film is not as splendid as the two earlier ones, but it is well worth seeing nonetheless. It gets off to a somewhat slow start, with a leisurely exposition of the locales and the characters. Frédéri’s growing obsession with l’Arlésienne takes its time. Still, conflict eventually creates greater drama as Rose learns of her son’s love for a woman “with a past” and the woman’s lover shows up to try and thwart her golddigging attempt to marry Frédéri.

The gorgeous cinematography and use of authentic locations, however, more than offset the plot problems (see frames above and at top). Like so many French directors of the silent era, Antoine took advantage of local carnivals and holidays, economizing by filming the crowds candidly. The frequent glances into the camera by locals testify to that. 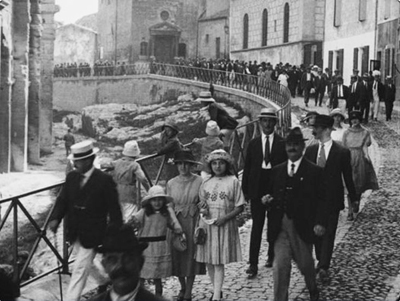 To the far left of this frame, one can glimpse the well-known Roman amphitheatre of the town, used in L’Arlésienne for a bullfight scene, whither the villagers in their best clothes are headed.

Antoine’s film makes an interesting comparison with Alberto Capellani’s 1908 version, shown in the first Cinema Ritrovato season of his films. Capellani shot most of his excellent version in Arles as well, though in a very different style. (I discuss it briefly here [7] and here [8]; the latter entry gives information on the DVD releases of various Capellani films shown at the festival, including L’Arlésienne.) 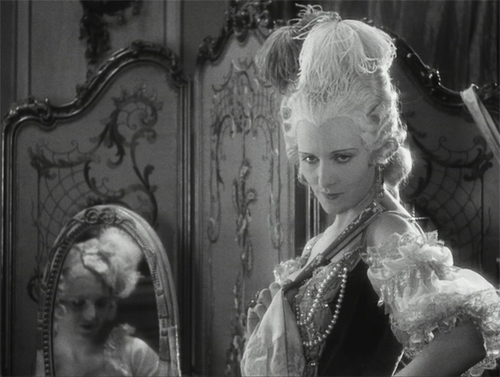 Gaston Ravel is a director whom many of us have heard of, but few of us have seen his films. His reputation is as a director of high-budget, prestigious films–comparable to Raymond Bernard, whose The Miracle of the Wolves (1924) is perhaps the most familiar of the epic period films of the period, excepting Napoléon vue par Abel Gance (1927).

The result is a lavish spectacle. The costumes were designed by J. K. Benda, who later created those of La Kermesse héroïque (Jacques Feyder, 1935). The interior sets were studio-built (see bottom), though the exteriors of the later parts of the film were shot at a huge chateau with extensive grounds, the Rochefort-en-Yvelines. At least some French directors had by this point adopted and mastered Hollywood three-point lighting, as the frame above demonstrates.

Visually the film in fact looks like it could have been made in one of the big Hollywood studios, though the story is a bit too risqué to have been made there. (The young lady dancing and trailing a long, diaphanous veil in the frame at the bottom eventually spins until it drops off, leaving her completely nude.)

I found the casting of “artistic dancer” Edmond van Duren (as the program notes describe him) unfortunate. He reminded me of the overly merry Merry Men in Alan Dwan’s 1922 Robin Hood, bounding through nearly every scene. The rest of the actors were fine, particularly Arlette Marchal as Rosine, later the Countess Almaviva.

The tone also changes across the film, from comedy in the first part, to drama in the second, and then to tragedy (or melodrama?) in the third. The original plays premiered so far apart that the changes might have been less noticeable or made more sense. Mozart, however, was wise to confine himself to the middle play.

Apart from such problems, however, the film is entertaining, as well as being an important example of how ambitious a project French studios could occasionally manage–as does the film immediately below. 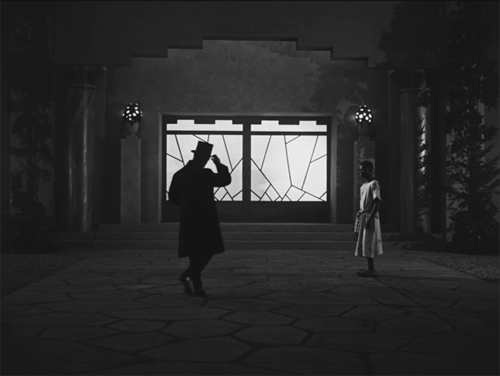 By the 1920s, Hollywood serials had declined from being the center of a program to being a low-budget side attraction. In France, however, serial storytelling remained quite central to the industry. Some serials were presented as discrete episodes, each involving a continuing set of characters, as in a television series. Other installment-films were “ciné-romans,” telling a continuous tale in blocks that might be published at the same time in newspapers and magazines.

Louis Feuillade’s death in 1925 ended his long string of beloved serials and ciné-romans for Gaumont. Other studios made equally popular, big-budget items, including Albatros, with Alexandre Volkoff’s 1923 La Maison du mystère [11]. That film’s reputation lingered in film history despite the unavailability of complete prints until recently. By contrast, Henri Desfontaines’ Belphégor has remained largely forgotten.

Now it has been restored in a beautiful version. Although it, too, centers around a mysterious master criminal out to control the world, it is miles away from the wonderful mid-1910s serials of Feuillade. It’s instead a strange and impressive combination of various elements of French cinema of the 1920s. Where Feuillade shot in a rough-and-tumble way in the streets of Paris or the environs of Nice, with cheap sets for interiors, Belphégor‘s settings immediately remind one of L’Herbier’s L’Inhumaine [12] and L’Argent [13]. In particular, the exterior (above) and interiors (below) of the Baroness Papillon recall that of Claire Lescot in the former film. 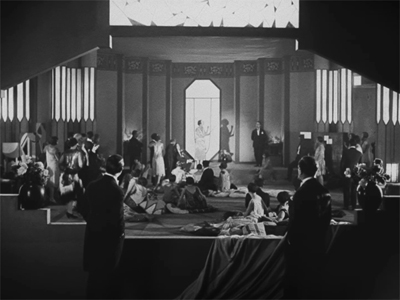 Like Figaro, Belphégor has impressive production values and a grasp of Hollywood three-point lighting that creates dark, suspenseful shots. The film gained some prestige by supposedly being the first story to be set inside the Louvre. The interiors, of course, are sets, but ones that successfully convey the look of a major museum at night. 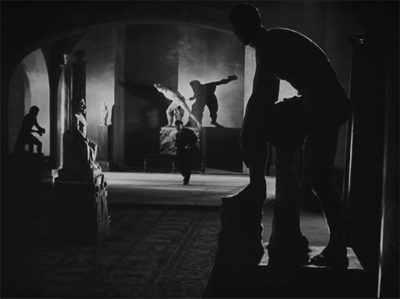 The script has a certain looseness, perhaps caused by the fact that the episodes were being released in parallel to the serialization of Arthur Bernède’s novel in Le Petit Parisien. That journal’s director also headed Cinéromans, a production firm making films exclusively for distribution by Pathé.

A meandering and repetitious plot is not the film’s main problem. The common–and probably correct–assumption that a film’s villain must be a strong, interesting character is completely ignored here. We see “Belphégor” only occasionally, looking like a person dressed in a burka with some checkered decoration around the head. Unlike Fantômas and other Feuillade villains, we never see Belphégor out of costume until the very end. Instead the villain’s machinations are largely carried out by a pair of thugs who have a faintly ludicrous, not-very-dangerous air. Belphégor, when encountered in the Louvre by the guards and investigators, invariably runs and, after a brief chase, escapes.

Oddly enough, the main detective, Chantecoq, is played by René Navarre, so memorable as Fantômas. (He was one of the co-founders of Cinéromans in 1919.) His presence hovers over the film, emphasizing that the main villain is barely present and does little.

Like the two other films discussed here, Belphégor’s pristine restoration, its beautiful sets and cinematography, and the expert lighting make it a pleasure to view. Complete serials from this era are so rare that as an historical document, it is welcome indeed.

Although these three films are not among the masterpieces of the 1920s (though L’Arlésienne comes closest), they give us more insight into French cinema of the day–a national cinema that has remained somewhat in the shadows of the German Expressionist and Soviet Montage movements of the same period.

As usual, the festival held its Il Cinema Ritrovato DVD Awards ceremony [16], though by this point the competition is dominated by Blu-ray releases. Our friends at The Criterion Collection, Flicker Alley, and Kino Lorber figured prominently in the awards and jury members’ favorites, as did international archives and companies. I have blogged about the two Flicker Alley jury favorites, Waxworks [17] and Spring Night Summer Night [18]. 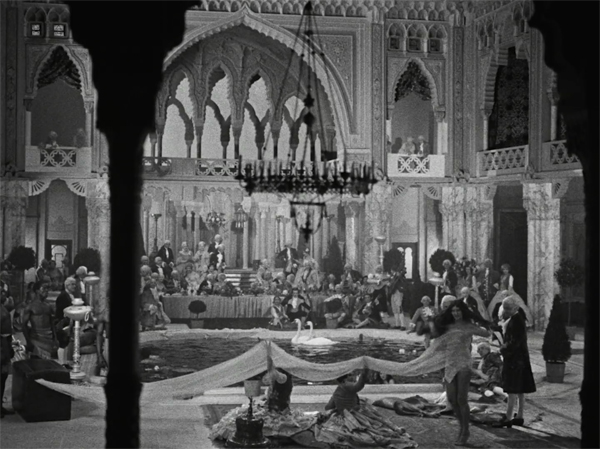