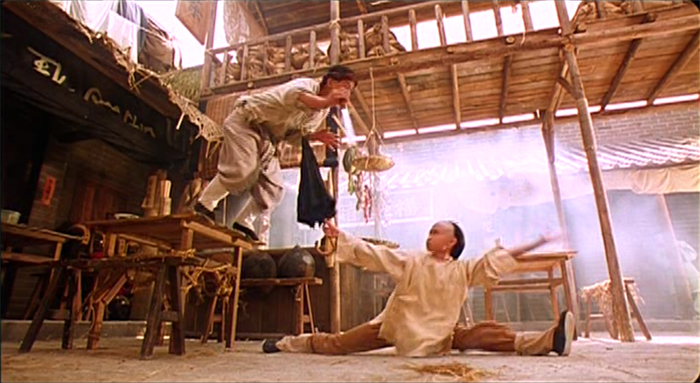 Another entry (apologies to Ken Jacobs [2]) of little things that cheer up lockdown. Previous entries are here [3] and here [4]. This one, unlike a couple to come, is suitable for all ages.

Why do I get a thrill from watching an apparently frail little boy beat the bejeezus out of unkempt bullies? More to the point, why weren’t there movies like Iron Monkey (1993) when I was a tad?

It’s a wing of the Tsui Hark Wong Fei-hung reboot saga that began with Once Upon a Time in China (1991), putting Jet Li on the world map. This installment is directed by Yuen Wo Ping, master choreographer of Crouching Tiger and The Matrix and no mean director himself. It’s a prequel, showing us the young Fei-hung learning his craft from his apothecary father and the mysterious robinhoodish Iron Monkey.

Before the main course, here’s a snack.

This one minute of graceful movement is one minute more than you find in most of our movies today. Do something short, smart, and crisp, and the camera loves it.

To see Young Wong finding his groove, here’s the scene in which he practices some fancy evasion and defense against heavily armed but fatally dumb thugs.

The subtitles provide a whole other level of diversion.

The whole film, featuring Donnie Yen and other Hong Kong stalwarts, is good dirty fun. Versions are available on streaming [5], but you should avoid the sanitized Miramax release. There’s also a 1977 kung-fu film [6] bearing this English-language title, but its plot is quite different.

Note: The boy Wong is played by a girl martial artist, Angie Tsang Sze-man [7], who went on to become a wushu champion.

For an update on the situation in Hong Kong, here is a story in the Washington Post [8].

I write about the art and craft of Hong Kong martial arts movies in Planet Hong Kong: Popular Cinema and the Art of Entertainment [9]. It explains, among other things, why the subtitles are so weird (p. 78).

P.S. 15 June 2020: Thanks to Radomir Kokes (Douglas) for correcting my misattribution of The Transporter to Yuen Wo Ping. It was of course directed by the great Corey Yuen Kwai.