Not all cinephiles are comics fans, but quite a few are. I guess it’s partly a matter of the Adolescent Window [2], and partly an intuition that both are forms of what Will Eisner calls “sequential art.” [3]

For my part, a Boomer childhood spent with Nancy and Little Lulu and Scrooge McDuck was followed by a boyhood fastened on Superman and Batman. Then came the cutoff. I went to college as the Marvel Universe was populating, and I never got into Underground Comix. Only Krazy Kat stayed with me through my college years. 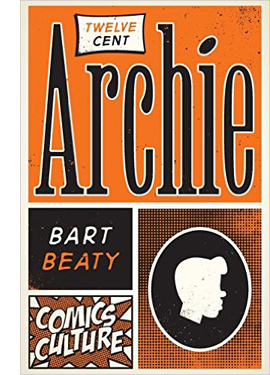 In the 80s Kristin and I followed young talents like Matt Groening, Berke Breathed, and Lynda Barry, while becoming fans of McCay. When I encountered Eurocomics, particularly the Clear Line style and its heirs, I perked up. Joost Swarte [4] (and here [5]) was a special favorite of ours. At about the same time I revisited the old stuff, like Cliff Sterritt. During the 90s and 00s, I tracked the emergence of Ware, Clowes, and other independents.

Somewhere in all this, Archie abides. I can’t remember when I started reading him, or when I stopped, but he was for me, as for many others, simply and permanently there. Only when I accidentally learned in 2009 that he was to marry Veronica did I go back to him. Finding an interesting variant of the three-roads motif of folklore, I whipped up a blog entry [6]. I added some thoughts about the skillful graphic design of Bob Montana’s 40s work, but in the process I was too dismissive of the later decades chronicling life at Riverdale High.

I realize my error now thanks to Bart Beaty’s wonderful Twelve Cent Archie [7]. It’s a critical and historical study of Archie’s world from December 1961 to July 1969, a period when the comics sold for a princely $.12. That’s also the period, Beaty maintains, when the books’ most skilful writers and artists were at work: Stan Lucey (the Archie titles), Dan DeCarlo (Betty and Veronica), and Samm Schwartz (Jughead). Beaty read every book in the nineteen series, over 900 volumes in all. This admirable undertaking yields funny and enlightening results. It’s one of the best books of comics criticism I’ve ever read.

For many of us, Archie is surpassed only by Nancy in the Bland Storytelling Sweepstakes. Archie is a freckle-faced guy on the make, rich girl Veronica alternately two-times him and flies into jealous rages, and Betty pines for Arch from afar. Archie’s rival Reggie tries to gum everything up, while Jughead watches with a mix of scorn and indifference. The plots are filled with deception, misunderstandings, horrible coincidences, and slapstick. Needless to say, the adults—teacher Miss Grundy, principal Mr. Weatherbee, Coach Kleats, Archie’s parents, Veronica’s dad Mr. Lodge—don’t have a clue.

The saga is so cut-and-dried that the makers could publish a story called “How to Write Comics” [8] (1965), in which the moves are laid out with daunting clarity. 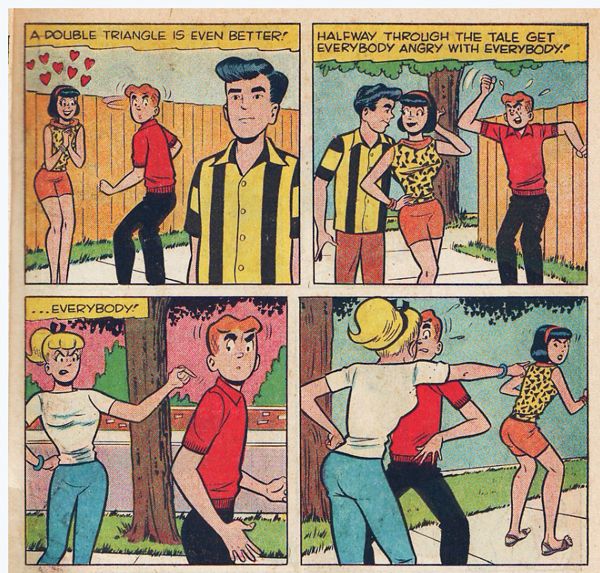 These tips remain good advice for plot-making. Had Beaty done no more than unearth this tale, we’d owe him a lot. As ever in popular culture, though, things aren’t so simple. Beaty shows us why.

At one level he embraces the sheer repetitiveness of it all—what he calls the Archie Machine. Oddly, as he points out, Arch is, narratively speaking, null. He can be a good student or a poor one, a clever manipulator or a klutz. Only a few traits, such as his need for money and his innocent lust for vertiginous kisses, persist. Reacting to situations rather than creating them, neither hero nor antihero, he’s more of an unhero, “a blank space on which stories are written.” As a result, there’s little continuity in the stories. If the plot demands Archie to be good in French, he will be, even if previous stories have shown him to be linguistically inept. Besides, as Beaty asks, “Does Riverdale High even have a French teacher?”

The same goes for Riverdale, which despite its name, seems serenely indifferent to its river, which hardly ever appears. There are four seasons, but the topography is fluid, provided with mountains, beaches, forests, and farm fields as needed. This Borgesian landscape reminds you of the Simpsons’ Springfield, but that municipality has landmarks for ready reckoning. Homer always lives next door to Ned, Moe’s bar is always beside King Toot’s Music Store. Beaty points out that in Riverdale, we can’t say whether Veronica’s house is on Archie’s way to school: sometimes it is, sometimes not. “It depends on the needs of the story.” And unlike Springfield, Riverdale is forbiddingly WASP: “a wish-dream of white privilege and normative sexualities.”

Given this mixture of relentless monotony and casual vagueness, the challenge for the writers and artists was to make something interesting. Here’s where Beaty’s book pulls me in: Artists need to solve problems. He shows that his three main artisans created fun and cleverness out of nearly nothing.

I dimly remember thinking, as a kid, that there was more going on in those books than I could understand, but finally, sixty years later, I get a glimpse of it.

Take Betty. Betty isn’t just the lovelorn also-ran. She plots against “best friend” Veronica, pulls pranks to fool the hapless Arch, and generally acts, as Beaty notes, like a stalker. As for Veronica, she can be quite the schemer too. Pictorially, though, they might be twin sisters. “Betty = Veronica,” one of Beaty’s 100 (!) chapters, asks: “Why does Archie struggle to choose between Betty and Veronica when, for all intents and purposes, they are exactly the same person?” Okay, Betty has a ponytail (to which Beaty devotes another chapter), but you take his point. Even when the girls decide to change hairstyles, they wind up looking cloned.

In scenes like this, you have to believe that the creators were having fun with the standard-issue look of our two heroines. Their cookie-cutter similarity allows for ingenious changes in posture, costume, and expression (see below), and can be a source of gags, as here–when their peekaboo hair styles keep them from seeing a pop star’s passing below them.

Silly dialogue that made me snicker still does. Reggie strolls along singing, “I love me, I think I’m grand. When I’m with me I hold my hand.” In the summer I graduated from high school, I don’t think I read the following exchange, but I would have mostly understood it.

Betty: “Come in, mild-mannered reporter! Do something super!”

Betty (recovered, ushering Archie to the door): “Let’s go! I’m not a good first violinist, but I can play second fiddle with the best!”

You wound me?! Denying he’s grabbing Betty on the rebound is an act of supreme callousness. No Superman, Arch. Beaty credits some of the best lines to writer Frank Doyle, source of “I never snapped a whipper in my life.” I wonder if Doyle wrote the oft-reprinted Tiger (1961) with its memorable “A boiling, bubbling volcano flames behind this mild-mannered facade.”

Beaty offers so many ideas and observations that I can pause only on the major thing he convinced me of: the fine comic draftsmanship of Harry Lucey. Beaty waxes eloquent on Mr. Lodge’s anatomical twists and turns across a single page. That called my attention to the fact that Lucey drew funny, especially in scenes of manic action. It’s all in the legs and toes, kids. 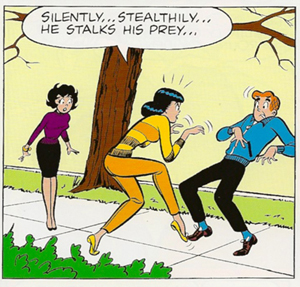 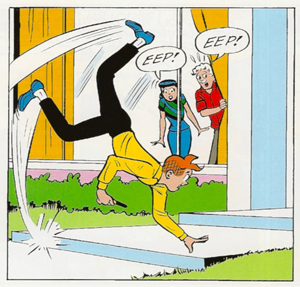 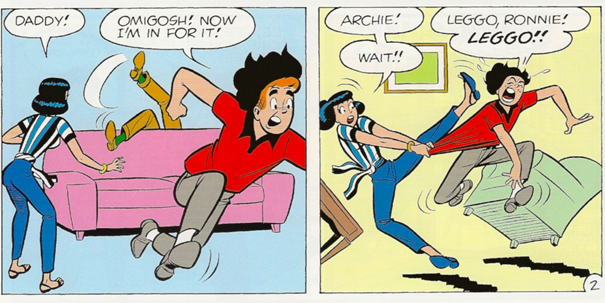 Who expects contrapposto in an Archie comic? But we get it when Betty goes bowling.

At times we get the classic comic multiple-image stuff that not only cartoonists but animators like Disney [15] and Bob Clampett [16] used in movies. Archie has been spotted carrying his mother’s purse.

As Beaty shows, Lucey excelled at calisthenic clinches and tornado-intensity smooches. When a character, even a dog, kisses another character, he/she/it sweeps the kissee off his/her feet, literally. 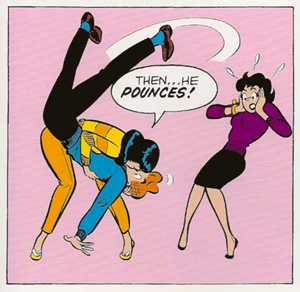 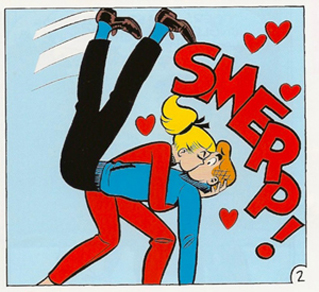 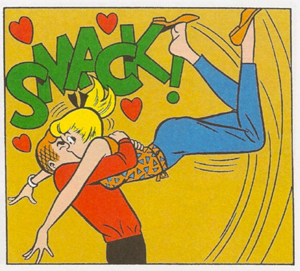 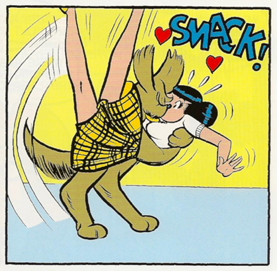 Perhaps because the action is often so violent, Lucey can spare a panel that’s a virtual freeze-frame. Any other artist would have wrapped Mr. Weatherbee, plummeting out of his taffy shroud, in a flurry of speed lines, as above. The near-absence of those lines makes the poor man seem suspended forever before his fall. 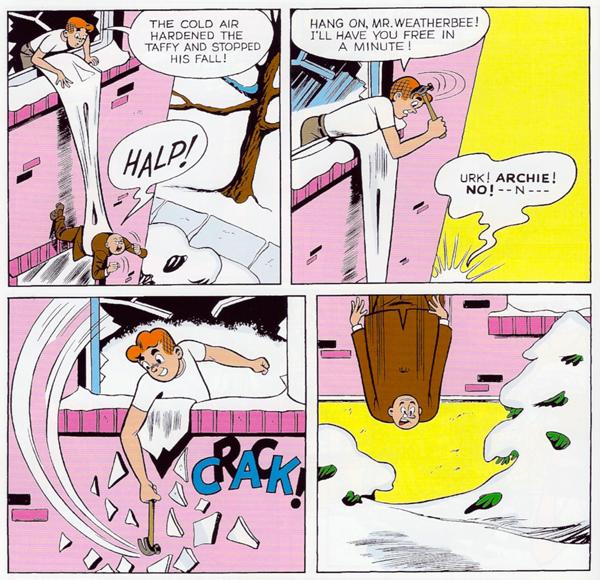 Actually there are speed lines, but they’re so slight and striated they might be creases in the brown suit. Only the sharpest eye will catch the ones around Mr. Weatherbee’s left wrist. 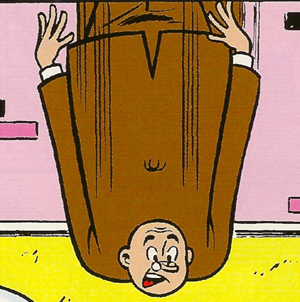 Thanks to Lucey’s technique, in the same panel the hapless Riverdale principal both falls and hangs suspended.

Hergé likeds to keep his scene’s space clear and consistent, [24] modifying it slightly with “cut-ins” and “pans.” Lucey, like other American comics artists, freely changes angle and even character arrangement to create variety and to point up dialogue. In one pair of panels, the change of angle is bold, slicing off half of Archie’s face to give greater emphasis to Betty’s angry arm-thrust and Ronnie’s reaction on the far right.

A slight change of angle can accentuate background action–below, a flattened Archie raising his head. But Ronnie and Betty have already slid toward the foreground as well.

Characters are freely shifted around the frame, usually in obedience to a left-to-right reading of the balloons. But across a page these spatial reorientations can create a vivacious pattern. Against the mild purple chair, for example, Betty’s scandalous polka-dot dress pops out in each panel while dominating the layout as a whole. 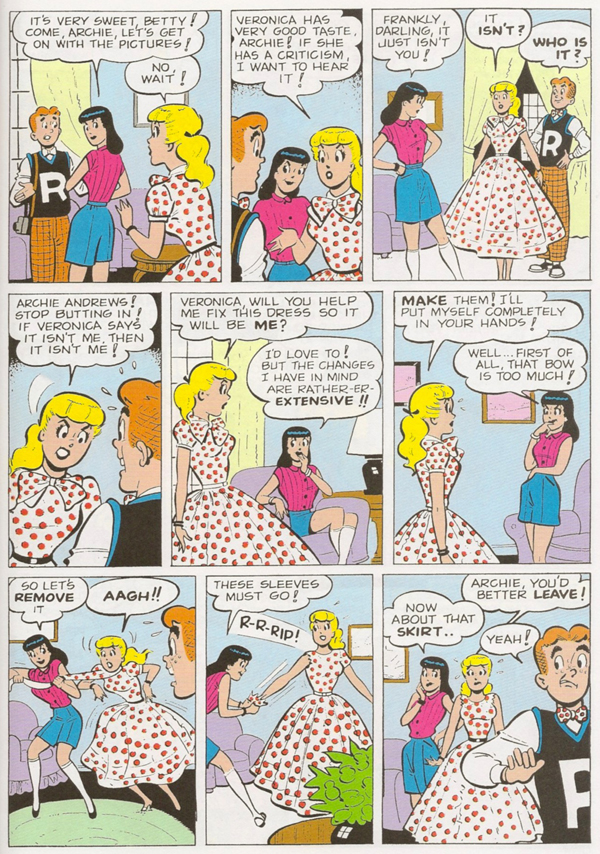 Lucey could do detail too. In any given panel or set of panels, there are little touches that distinguish Betty from Veronica—typically, the lips. Here Betty’s mouth in the second panel seems to catch Veronica’s sideways twist in the first. By the third, Veronica’s mouth has straightened out a little.

Like Archie comics or despise them, but don’t talk about Cathy or Dilbert in the same breath. If you’re a cartoonist, you should be able to draw. If you can infuse your drawing with vivacity, so much the better.

I’ve followed Beaty’s work since his magisterial series, “Eurocomics for Beginners” ran in The Comics Journal [29] in the 1990s. His many books [30] are major contributions to comics scholarship. For sheer pleasure, though, nothing of his I’ve read surpasses Twelve-Cent Archie. It’s at once personal–he recalls his childhood encounter with a cache of Archie books on summer vacation–and analytical in a sympathetic way. Like a lot of good criticism, it opens your eyes while making you smile.

Bart Beaty provides background on Twelve Cent Archie in this interview [31]. A worthwhile review is in The Atlantic Monthly [32]. Beaty talks with indefatigable media analyst and blogger Henry Jenkins at Confessions of an Aca-Fan [33].

Thanks to Hank Luttrell of 20th Century Books [34] and Bruce Ayers of Capital City Comics [35] for help in finding some Archie stories. Thanks as well to Jim Danky for many long lunches about comics, film, and less important things.

The Archie-marries-Veronica issue I wrote about in 2009 was but the beginning of a long parallel-universe cycle [36]. For a list of the many other revisions in the Archie-verse, see this article [37]. Then there are the Betty and Veronica reboots [38]. The horror cycle, Afterlife with Archie [39], went in another direction. (And you thought the original kids were zombified.) It’s been a big success [40]. Urk!

In timely fashion, Mad City [41]Movie Guy Gerald Peary [42] has come out with his own contribution, a documentary called Archie’s Betty [43]. He too has reviewed Beaty’s book for The Arts Fuse [44].

P. S. 23 January 2017: Here’s some fascinating backstory [45] on the “reimagining” or “rebooting” or “reinvention” of the Archie saga. Turns out Forking-Path Archie, which got my attention, was a turning point for the company as well as its protagonist. 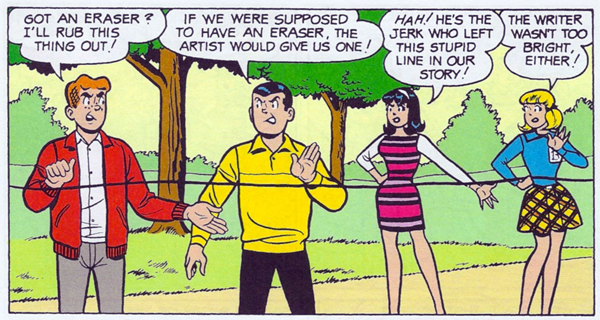