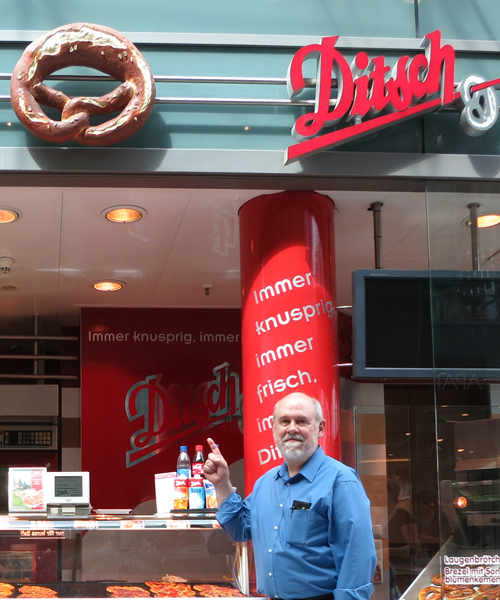 A bad back kept me from Cinema Ritrovato, as Kristin explained in her Bologna blog entry [2]. So I spent that week at home fiddling with the Film Art entry [3], and starting another one that I posted most recently, on the swirl of controversy [4] around the Orpheum Theatre here in Madison.

Thanks to some exercise, chiropractic, and a nice dose of painkilling medication, I was able to embark on the second phase of the trip: My annual visit to Brussels for its Cinédecouvertes [5] festival and for some research in the Royal Film Archive. But this visit was different from earlier ones because I took time off to visit colleagues in Germany. 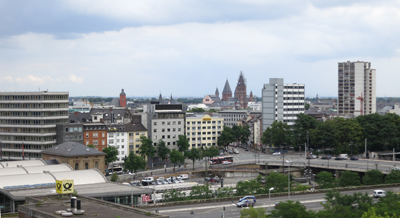 My first stop was Mainz, a lovely cathedral town that’s also the capital of its state. My hosts were Andreas Rauscher [7] and Oksana Bulgakowa [8] of the University’s Department of Film, Media, and Empirical Cultural Studies.

Andreas has with two colleagues written a book on The Simpsons (Subversion in Prime Time) [9]. Once very controversial (because of its many pictures from the series), it’s now headed into its third edition. Andreas also works extensively on narrative theory in film and media. Oksana, Chair of the Department, is an old friend of ours who has done a great deal of work in classic Soviet cinema. She has written a comprehensive biography of Eisenstein [10] and has launched an ambitious program [11] studying gesture in cinema and culture. It was a pleasure as well to re-meet Norbert Grob [12], a key player  in a recent collection devoted to “minimal cinema” (you know I like the cover [13]), and to meet Armin Jäger, who has written us with corrections and suggestions for Film History: An Introduction [14].

My talk was the last in a series on the future of film studies. I usually hesitate to participate in exercises like these, which tend toward the gaseous. But when Andreas assured me he wanted me to discuss how modern digital culture, particularly the Web, affected my research, I felt more able to say something. So I did, drawing together what I’ve learned through and about the online world. The results were recorded on video and will be posted online. 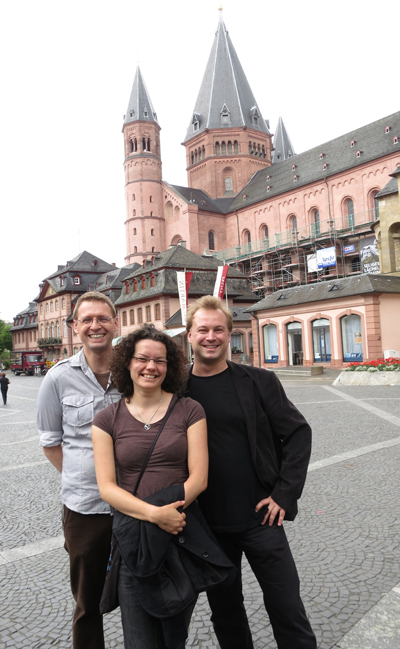 Before the talk I enjoyed ambling around Mainz with Andreas and his colleagues Bernd Zywietz (left, above) and Renate Kochenrath. Renate made me feel old: She had attended my 2003 lecture at the University as an undergraduate. But she compensated by (a) giving me a spare umbrella; and (b) showing me the devil’s dung in a corner of the beautiful cathedral [16].

I even got to meet a fan, Alexander Gajic, who had reviewed my Pandora e-book. Like me, he stalks autographs, but how do you autograph an e-book? He found a digital-to-analog solution [17].

The night before, I had walked a bit around town with Andreas, Oksana, and Dietmar Hochmuth. I had the sense of being in a Murnau film: winding streets overseen by magnificent towers half-medieval and vaguely futuristic. 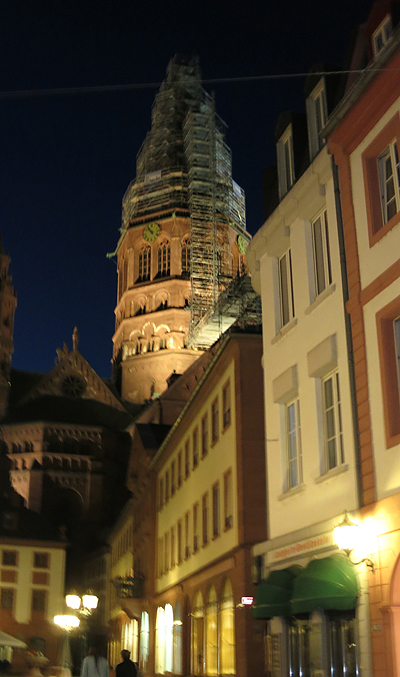 After my 1 ½ days in Mainz, I had only a day in Frankfurt. My host was Vinzenz Hediger [19], who explores the intersection of film history and media history.  (He knows, in particular, a lot about the history of the Hollywood industry.) Here he is with two sterling Steenbecks his department retains. 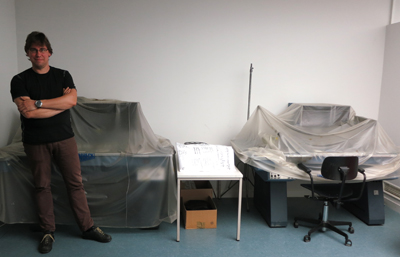 The film department at Goethe University is housed in a stunning complex, now known as Poelzig-Bau or the IG Farben Hochhaus. 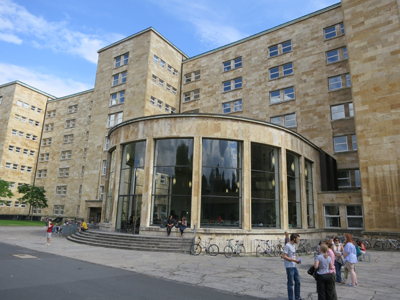 It has quite a history [22]. The great architect and set designer Hans Poelzig (the Grosses Schauspielhaus in Berlin, sets for The Golem) created it for the IG Farben chemical trust at the end of the 1920s. The largest office building in Europe, it became a center of Nazi technology, including the development of the Zyklon-B gas used in concentration camps. The complex housed the US armed forces HQ from 1945 to 1995. According to Colin Powell’s autobiography, he first met Dick Cheney [23] in these halls.

At Frankfurt, I gave two talks. The first was a variant of a party piece I’ve worked up, on narrative innovation in Hollywood during the 1940s. I was happy to see so many students turn up on a very pleasant day. I was also happy to see that Heide Schlüpmann [24], now retired, had arranged for a display of film, actual film, to be a permanent part of the lecture room. 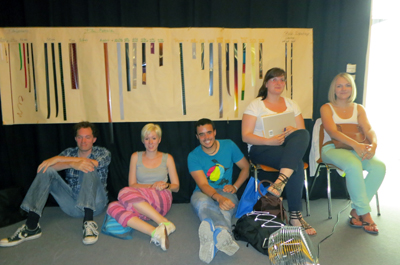 My other Frankfurt talk was at the Deutsches Filminstitut Filmmuseum [26], recently redone as a dazzling modern facility. Walk in, and you’re in a dark box, in which the displays glow enticingly, like pods in a space station. 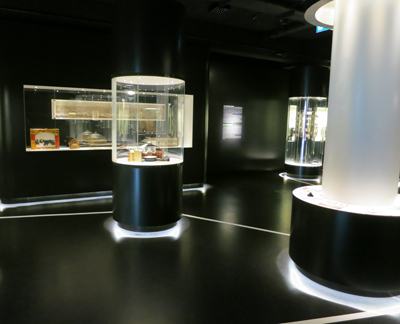 The first floor is devoted to pre-cinema, with many hands-on toys and gadgets. It culminates in a Lumiere display. The second floor roams across film history, with an emphasis on storytelling. Eras mingle: Next to a velvet dress from Visconti’s Leopard you might see a Giger Alien design. And it’s big. 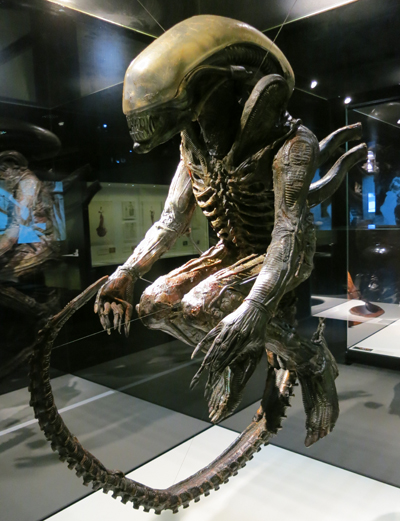 There are many interactive displays, letting you recut a sequence or remix a soundtrack. The third floor is for touring exhibitions, this time one devoted to Film Noir. Close to my heart was a diagram of the time shifts in the plot of The Killers. 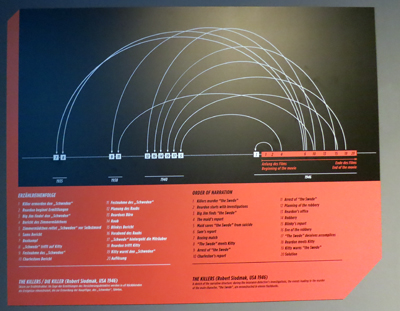 Like New York’s Museum of the Moving Image [30] (which we visited here [31]), the Frankfurt museum has acknowledged the need to educate a new generation of movie lovers. What once were temples drawing aging cinephiles to worship are now filmic Exploratoriums, invitations to play with the curious thing we call movies.

More on Germany–well, the obscure German silent movies I’ve been watching in Brussels–in an upcoming post. For now, back to work in Belgium. And to the tasty snack treats portrayed below, although in somewhat smaller portions.

Thanks to Andreas Rauscher, Vinzenz Hediger, and Michael Kinzer for background information on their institutions.

Kristin has just published her own account of our experiences going digital, here [32]. 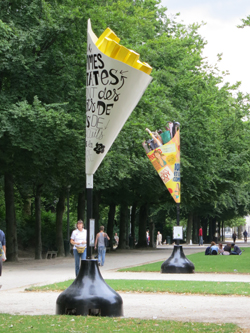 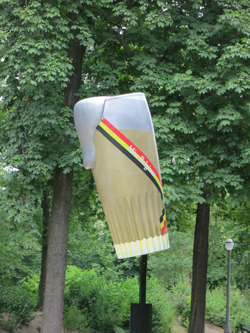 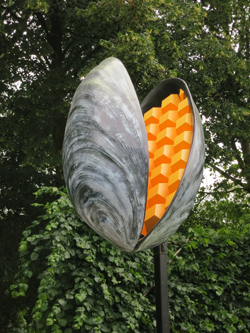 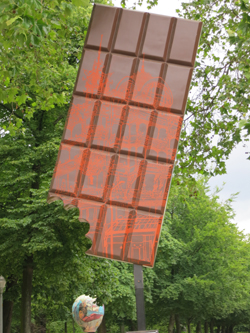 P.S. 22 July: Renate Kochenrath and her colleagues have created a striking site [37] documenting art cinemas in the Rhineland-Palatinate region. The photos are quite beautiful.