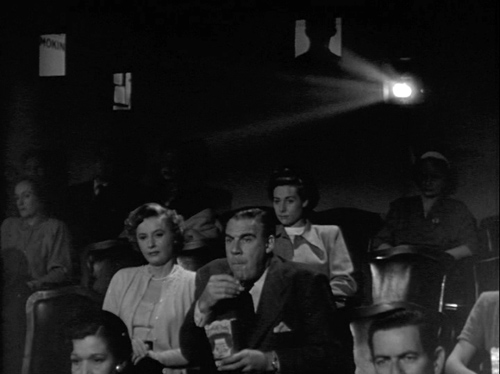 Amplifications, corrections, and updates have been piling up over the last couple of months, and we began to realize that simply appending postscripts to older entries probably didn’t register with many readers. Judging by our stats, revisiting older entries isn’t a priority for most of the souls whom fate throws our way. So here’s some new information about older posts.

*I wrote about [2]Jafar Panahi‘s This Is Not a Film at the Vancouver International Film Festival [3]. Today Variety reported [4] that an appeals court has upheld Panahi’s sentence of six years in prison and a twenty-year ban on travel and filmmaking. His colleague Mohammad Rasoulof’s jail sentence was reduced to a year. Panahi’s attorney says that she will appeal the decision to Iran’s Supreme Court. Be sure to read the Variety story for some background on the despicable treatment of other filmmakers, notably a performer who, merely for acting in a movie, was sentenced to a year in jail and ninety lashes. 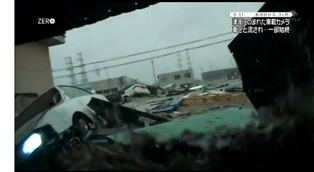 [5]*My trip to the Hong Kong festival [6] last spring was to have included a visit to Japan. But the earthquake and the tsunami decided otherwise. Here are two remarkable items about the country’s catastrophe and the people’s resilience. First, a camera captures [7] what it’s like to be in a car that’s swept away. Then we have photographs of the remarkable recovery [8] that some areas have made–a real tribute to Japanese resilience. (For the links, thanks to Darlene Bordwell and Shu Kei.)

*The Mill & the Cross, which Kristin wrote about [9] at Vancouver, is getting some well-deserved attention. On October 16, Roger Ebert posted a blog entry [10] using the film to meditate on one of its main themes, human cruelty. The Mill & the Cross opens Friday, October 21, at the Music Box Theatre in Chicago.

*At Fandor, in response to Once Upon a Time in Anatolia, Ali Arikan wrote a penetrating and personal essay [11] that I wish I’d had available when I wrote my review [9] at VIFF.

*Tim Smith‘s guest entry for us, “Watching you watch THERE WILL BE BLOOD [12],” was a huge hit and went madly viral. At his site, Continuity Boy, he has posted a new, no less stimulating entry [13] on eye-scanning. It shows that we can track motion even when the moving object isn’t visible! 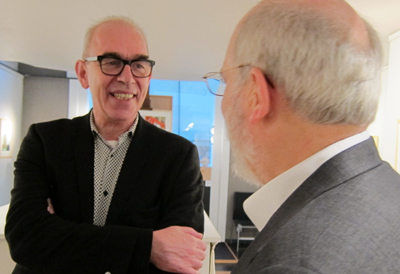 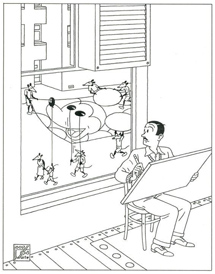 *During my trip to Brussels in early September for the conference of the Screenplay Research Network, I stole time to visit the superb Galerie Champaka [16] for the opening of its show dedicated to Joost Swarte (above). Longtime readers of this blog know our admiration [17]for this brilliant artist, so you won’t be surprised to learn that I had to get his autograph. The show, consisting of work both old and new, was also quite fine; it’s worth your time to explore the pictures [18], such as the one revealing how Disney was inspired to create Mickey (above). Thanks to Kelley Conway for taking the shot, and to Yves for taking this one. [19] And special thanks to Nick Nguyen (co-translator of two fine books, here [20]and here [21]) for alerting me to the show.

*An update for all researchers: Now that we have online versions of the Variety Archives [22] and the Box Office Vault [23], we’re happy as clams. (But what makes clams happy? They don’t show it in their expressions, and their destiny shouldn’t make them smile.) Anyway, to add to our leering delight, we now have the splendidly altruistic Media History Digital Library [24], which makes a host of American journals, magazines, yearbooks, and other sources available in page-by-page format, ads and all. You’ll find International Photographer (too often overshadowed by American Cinematographer), The Film Daily, Photoplay, and many more. Get going on that project! 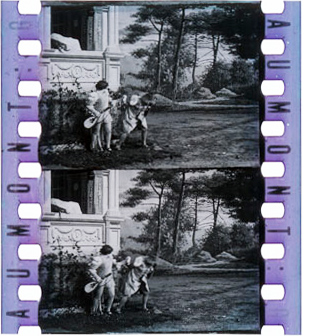 [25]*This just in, for silent-cinema mavens: The Davide Turconi Project [26] is now online, thanks to a decade of work by the Cineteca di Friuli [27]. Turconi was a much-loved Italian film historian who, among other accomplishments, collected clips of frames from little-known or lost films. The archive of 23,491 clips, usually consisting of two frames, is free and searchable [28]. On the left we see a snip from Louis Feuillade’s Pâques florentines (Gaumont, 1910). Paolo Cherchi Usai and Joshua Yumibe coordinated this project, with support from Pordenone’s Giornate del cinema muto [29], George Eastman House [30], and the Selznick School of Film Preservation [31]. (Thanks to Lea Jacobs for supplying the link.) For more on Josh’s research, see our entry here [32].

And while we’re on silent cinema, Albert Capellani is in the news again. Kristin wrote about [33]this newly discovered early master after Il Cinema Ritrovato in July. A recent Variety story [34] discusses some recent restorations and gives credit to the Cineteca di Bologna [35] and Mariann Lewinsky.

*My entry on continuous showings [36] in the 1930s and 1940s attracted an email from Andrea Comiskey, who points out that when Barbara Stanwyck and Paul Douglas go to the movies in Clash by Night (above), she prods him to leave by pointing out, “This is where we came in.” Thanks to Andrea for this, since it counterbalances my example from Daisy Kenyon, which shows Daisy about to call the theatre for showtimes. And since posting that entry, I rewatched Manhandled (1949). There insurance investigator Sterling Hayden hurries Dorothy Lamour through their meal so that they’ll catch the show. He apparently knows when the movie starts. So again we have evidence that people could have seen a film straight through if they wanted to. It’s just that many, like channel-surfers today, didn’t care.

*Finally, way back in July, expressing my usual skepticism about Zeitgeist explanations, I wrote [37]:
I’m still working on the talks [for the Summer Movie College], but what’s emerging is one unorthodox premise. As an experiment in counterfactual history, let’s pretend that World War II hadn’t happened. Would the storytelling choices (as opposed to the subjects, themes, and iconography) be that much different? In other words, if Pearl Harbor hadn’t been attacked, would we not have Double Indemnity (1944) or The Strange Affair of Uncle Harry (1945)? Only after playing with this outrageous possibility do I find that, as often happens, Sarris got there first: “The most interesting films of the forties were completely unrelated to the War and the Peace that followed.” Sheer overstatement, but back-pedal a little, and I think you find something intriguing.

David Cairns, whose excellent and gorgeously designed Shadowplay [38] site is currently rehabbing Fred Zinnemann, responded by email:
Firstly, I find the start of WWII being equated with Pearl Harbor a little American-centric. Much of the world was already at war when that happened. Secondly, it could certainly be suggested that the two films you cite WOULD have been different without a world war. Billy Wilder and Robert Siodmak were comfortably making films in France before Hitler’s invasion drove them to a new adopted homeland. Those movies might well have happened without WWII, but they would probably have had different directors.

Ouch! What else could I do but write:
Thanks for this. Your points are well-taken. Not only was I America-centric, but I neglected to point out that before Pearl Harbor America was  more or less directly involved in the war. Even though America wasn’t yet in the war in late 1941, a lot of the economy was on a war footing and the industry was already benefiting from the rise in affluence among audiences.
Your point about the particular directors is reasonable too. I think I chose bad examples. All I wanted to indicate was that the Hollywood system continued to function as usual, particularly with respect to narrative strategies. For instance, Chandler wrote the screenplay for DOUBLE INDEMNITY (and apparently was responsible for the flashback construction), and as you say, had another director handled it, at the level of narration it might well have been the same. UNCLE HARRY is a harder case for me, I admit! Maybe I should have chosen THE BIG SLEEP and MURDER, MY SWEET!
I’m grateful for your comments! You help keep me honest.

David replied with his usual generosity:
That’s OK! BIG SLEEP and MURDER MY SWEET definitely work! Plus any number of non-flag-waving musicals, westerns, swashbucklers (though there’s a little propaganda message in THE SEA WOLF at the end) and certainly comedies and horror. . . .
And then there’s KANE and AMBERSONS.

Better late than never–something you can say about all these updates. 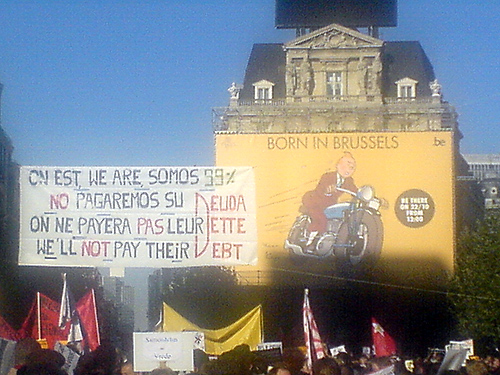 [39]
Probably not what Spielberg and Jackson had in mind: Tintin [40] leads the indignados [41]. Photo by Stef Franck, with thanks.