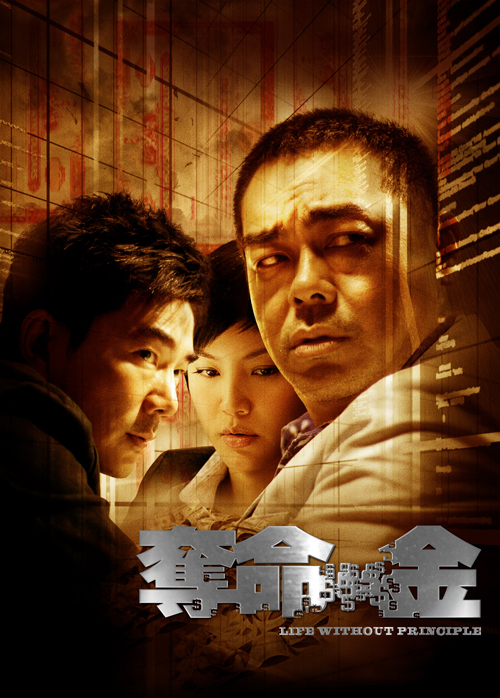 The Milkyway films of Johnnie To Kei-fung have resisted some of the fancier tactics of contemporary cinema, such as self-correcting flashbacks and forays into what-if universes. It’s true that he has played a little with disorienting subjectivity (The Mad Detective), and his intricate plotting in films like The Mission have something of the feel of converging-fates stories. But his chief devices, I tried to argue in Planet Hong Kong [3] and occasionally on this site [4], have been laconicism and ellipsis.

Hollywood dramaturgy tells you something important three times, but To’s films often just mention a key story point in passing. If you miss it, you’ll have to try to recall it later, even after the film is over. Likewise, in Hollywood films, any time periods that are skipped over are assumed to be irrelevant to the plot. But  To’s films (like Lang’s) omit showing us intervals that later prove to be quite important. Taken together, the laconic and elliptical approaches to storytelling make The Mission, Running Out of Time, The Longest Nite, The Mad Detective, and the last episode of Triangle into narrative games–games of wits among the characters, but also between the filmic narration and the audience.

With Life without Principle, fresh from screenings at Venice and Toronto, To embarks on a full-blown network narrative. The film follows three clusters of characters across three days, with the last day showing the collapse in world stock markets caused by the Greek debt crisis. All the characters are tied to this macro-event. Police officer Cheung and his wife Connie are about to buy an apartment, the bank investment advisor Teresa sees her customers lose thousands, and the triad Panther partners with his old friend Lung just before Lung’s market maneuvers crash.

Each character has more personal concerns as well. Cheung has learned that his dying father has taken a Mainland mistress, and he and Connie must decide whether to adopt the woman’s child. Teresa’s sales record is poor, and she’ll lose her job if she doesn’t generate more business. Panther needs money to bail out an errant triad colleague. Tying together all three strands is the gloating moneylender Yuen, who scoffs at the stock market and points out that he offers better terms than credit-card companies.

Designing a network plot offers you essentially two options. You can intercut all the strands as the protagonists move through time together (as in Nashville) or you can segregate the plotlines into blocks, as in the “chapters” of Pulp Fiction or the character-tagged chunks of Go. In the block pattern, some chronological fiddling will be necessary. We follow one character or group through story events and then hop back to an earlier period in order to follow another strand.

Life without Principle takes the block option. A prologue shows Cheung investigating a murder and Connie trying to buy an apartment for them. The bulk of the film starts by following Teresa through the days leading up to the financial crisis. The narration then glides back to the evening of the first day and we meet Panther, an obsequious but loyal triad working for a self-centered boss. Panther eventually joins his pal Lung in an internet stock swindle. The two plotlines converge at a murder in the bank’s parking ramp, involving HK $10 million in cash. In its final stretch the film starts crosscutting among Teresa, Panther, Lung, Cheung, and Connie. Each line of action comes to a distinct climax, only tangentially related to the others but still tied together by the fluctuations of the stock market.

Still, Johnnie To offers a network narrative on his own terms. Where a Hollywood film is careful to tell us when it skips back in time, usually by use of titles, To’s playfully laconic narration eliminates titles. Instead, the transitional marker is a rightward tracking shot of Hong Kong Island accompanied by jaunty a capella music in Swingle Singer style. More generally, To doesn’t mark the three days overtly within Teresa’s and Panther’s tales. To is more interested in creating a flow across each story rather than that sense of modular architecture we get with modern day-by-day plotting.

Moreover, the tonal shifts that we find in many Milkyway films help keep the stories distinct. Teresa’s and officer Cheung’s plots are straightforwardly dramatic and suspenseful, while Panther’s is grotesquely comic—a quality underscored by Lau Ching-wan’s blinking portrayal of a dense but compulsively earnest company man. The spaces are at variance too. Teresa is never seen outside the bank building (until the last shot), and so the action in her story is built around enclosure and small details, especially a crucial key. Panther’s story is expansive, roaming from a triad banquet to the streets and cafes of Kowloon.

The film relieson classic suspense techniques to an unusual degree , especially the passages in Teresa’s office. Moreover, we always like a drama that forces sympathetic characters to make bad decisions. Cheung, who impassively does his duty as a good cop, ponders disowning the half-sister he never knew he had. Panther, abused by his boss and his pals, remains naively loyal to them.

Our keenest investment, I think, is in Teresa’s situation. Rapacious bank policies make her sell chancy investments to people who can’t understand them. Her scenes with the aged Hi Kun, blindly buying into a high-risk fund, consume an agonizing ten minutes, and throughout you sense Teresa’s qualms about the scam she’s pulling. When she goes to fetch Hi Kun coffee, she pauses meditatively over the cup: laconic To again. Later, when Teresa is confronted by massive temptation, all our instincts urge her to succumb, even though it would be a crime.

Will these basically decent people come through the financial crisis unscathed? The Milkyway universe can be harsh and capricious. Expect the unexpected. 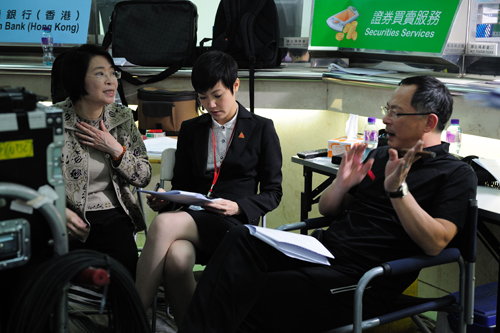 So Hang-shuen, Denise Ho, and Johnnie To on the set of Life without Principle.