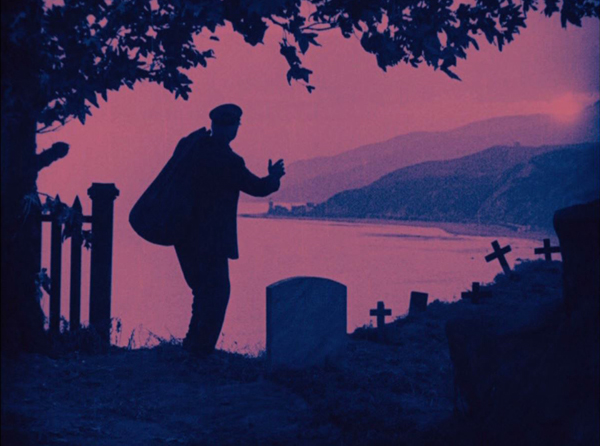 David and I have moved house recently, which has caused a long lag in my getting around to doing a DVD/Blu-ray roundup of recent releases. Some are not so recent anymore, but I shall call attention to them nonetheless.

Our friends at Flicker Alley have been busy, as usual.

Way back in February of last year, they released Behind the Door [2], a notoriously grim and brutal drama of World War I that long survived only in incomplete form. Using tinting rolls from the Library of Congress, some scenes from star Hobart Bosworth’s collection, and a re-edited Russian distribution print, as well as a copy of the continuity script, the restoration by the San Francisco Silent Film Festival, the Library of Congress, and Gosfilmofond approximates the original American release version fairly closely. (Two brief missing sections are filled in by photos and the texts of the original titles.) The tinting and toning, based on the Library of Congress material, is authentic and effective (see top), as is the new score by Stephen Horne.

The Russian version is included in the two-disc set, so we have one of those rare cases where it is possible to compare the foreign and domestic versions–to a degree. Most of the shots, of course, were made with a second camera, and there are inevitably differences of framings and even takes between those versions. Given that the new restoration depends heavily on the Russian print, the comparison must be made primarily on the basis of the differences in the order of the scenes and the other narrative changes made by the Russian editors.

Behind the Door tied for Best Single Release in Il Cinema Ritrovato’s DVD Awards [3], announced just last month. Congratulations to Flicker Alley and to other organizations we have ties to, which also won awards. The Criterion Collection tied for Best Box Set for its 100 Years of Olympic Films: 1912-2012. [4] This massive set (32 discs on Blu-ray, 43 on DVD) contains 53 films, including those by Leni Riefenstahl, Kon Ichikawa, Claude Lelouch, Carlos Saura, and Miloš Forman. Belgium’s Cinematek won Best Discovery of a Forgotten Film for its Marquis de Wavrin [5](1924-1937), actually a series of films shot in South America by this major anthropologist and filmmaker. German Concentration Camps Factual Survey (from the BFI and the Imperial War Museum), which David commented on [6] last year, won Best Special Features. 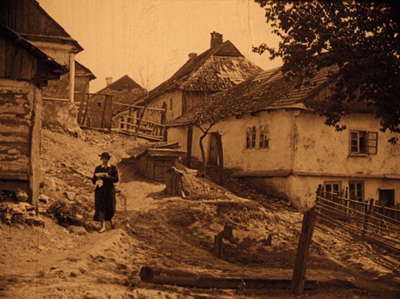 I have a particular interest in German silent cinema of the post-World War I era, so I was happy to see Flicker Alley’s release of Ewald André Dupont’s Das alte Gesetz [8] (“The Ancient Law”). Most people know Dupont only from his most famous and successful film, Variety (1925), known for its spectacular camera movements taken from trapezes.

Dupont had a long career, however, starting as a scriptwriter in the 1910s and becoming a director as well in 1918. Das alte Gesetz is mainly known as one of a small group of Jewish-themed films made in Germany in the period 1919-1924. More familiar to most would be Der Golem:Wie er in der Welt kam, co-directed by Paul Wegener and Carl Boese (1920) and to some, Die Gezeichneten, Carl Dreyer’s first German film (aka Love One Another, 1922). A helpful essay in the accompanying booklet by Cynthia Walk gives the political context of die Judenfrage (“the Jewish question) as it was being debated in Europe at the time.

Set in the 1860s, the film concerns Barush, the son of a rabbi in a shtetl in western Russia. He suddenly and somewhat implausibly conceives a desire to leave home and become a famous actor. Naturally his father disowns him. Joining a small traveling troupe, Barush ends up in Vienna, where an archduchess, played by Henny Porten, is impressed by his performance as Romeo and attracted to him as well. She arranges for him to join her court-theatre troupe, where he becomes a star as a classical actor.

The scenes in the shtetl (above) are done with considerable attention to authenticity and without the sort of ethnic humor that one might expect. Although Barush encounters prejudice in Europe, he does not evenually learn a lesson about assimilation and go back to his home with his tail between his legs. Far from it; his father is induced to read Shakespeare and suddenly realizes that there are indeed more things in heaven and earth than he had dreamed of in his philosophy. A happy reunion results, and Barush continues his career.

Das alte Gesetz was clearly a big-budget period piece, with several large sets. Moreover, the influence of classical Hollywood films, which began to be shown in Germany in 1921, is quite apparent. Dupont has mastered three-point lighting and analytical editing, including shot/reverse shot, as this scene between Barush and his father demonstrates. 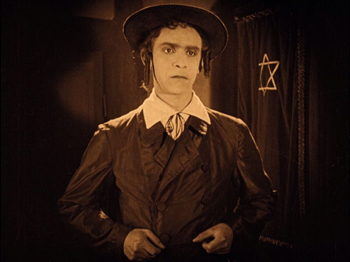 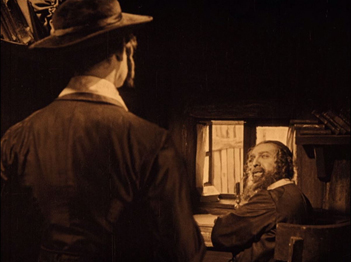 Barush is played by Ernst Deutsch, a major actor of the day, including in Expressionist films. He’s the rabbi’s son in Der Golem as well, and he plays the bank-cashier protagonist in Karl-Heinz Martin’s From Morn to Midnight [11].

Flicker Alley has also developed a healthy list of manufactured-on-demand titles [12]. Many of these are out-of-print films from the Blackhawk Collection. The 51 titles currently on the list include many silent classics, some of them difficult to see on disc otherwise, such as Lubitsch’s The Marriage Circle and Abram Room’s Bed and Sofa.

The new offerings lately have branched out somewhat to include more recent films. On September 3 of last year, the company released Alex Barrett’s London Symphony [13] (2017) for its home-video debut. In the press release for the disc, the director describes it as “a love letter to a city, but it is also a film about life in the modern era.” As the title indicates, Barrett places his film in the city symphony genre, and its release was timed to coincide with the 90th anniversary of the premiere of Berlin: Symphony of a City [14]. City symphonies  tend to be associated with the 1920s, when the genre originated and its most famous exemplars, Berlin and Vertov’s Man with a Movie Camera, were made. The genre has never disappeared, but Barrett has written that he chose “to make the film in a style associated with the filmmakers of the 1920s.”

For me, it captures well the style of the 1920s, and particularly Berlin. Shot in black-and-white, London Symphony falls into four movements, following a day in the life of the city–with, as in Berlin, pauses for lunch and dinner particularly dwelt upon. The opening section concentrates on buildings, and there are the inevitable juxtapositions of old and new (see bottom). Multiple cinematographers filmed the footage, but their work blends into a unified visual whole with many striking compositions.

Ruttmann injects occasional implicit political commentary, as when he juxtaposes shots of beggars in the streets with the well-fed Berliners in restaurants. Barratt concentrates on the beautiful and peaceful side of London–historic buildings, quiet parks, pleasant markets, and river scenes. The rather grubby and crowded atmosphere of, say, the West End of London is nowhere to be seen, which befits “a love letter.”

In January The Indomitable Teddy Roosevelt [15] joined the MOD catalog. This is a reissue of a 1983 television documentary that mixes documentary footage (Roosevelt was the first president to be filmed) and staged scenes. 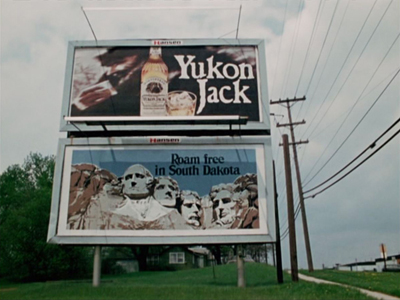 This series continues its steady release of experimental filmmaker James Benning’s works with a sixth two-disc set (DVD only) that goes back to his earliest features, films that solidified his international reputation. The new two-disc set contains two films from the late 1970s, [17] 11 x 14 (1977) and One Way Boogie Woogie (1978). Jim followed up the latter, a series of sixty shots of Milwaukee cityscapes, with 27 Years Later (2005), which presents the same series of locations, and One Way Boogie Woogie 2012, which further documents the changes in the filmmaker’s hometown. All three films are included in this set.

11 x 14 flirts with presenting a narrative without ever really concentrating on it. We see some of the same people at intervals, but no causal events link them, and their actions create situations rather than developing stories. Instead, the film’s shots, some quite lengthy, others brief, explore the urban and rural landscapes of Chicago and Milwaukee, as well as rural roads and fields in the surrounding area. (A familiar highway sign pointing the way to Madison is glimpsed at one point.)

For the most part the urban images concentrate on run-down areas, with motifs of travel (billboards, airplanes) and drinking (bars and more billboards) hinting at contrasting modes of escape. The shot above captures both motifs at once.

Given that Jim’s films seldom play outside festivals and museum venues, the Filmmuseum series is vital–though many of the images in these films are long  or even extreme long-shots and benefit from being seen on a big screen. The last time we had a chance to do so was when RR (2007) was shown at the 2008 Vancouver International Film Festival [18]. The Austrian Filmmuseum also published a book on Jim’s work, which David discusses here [19]. 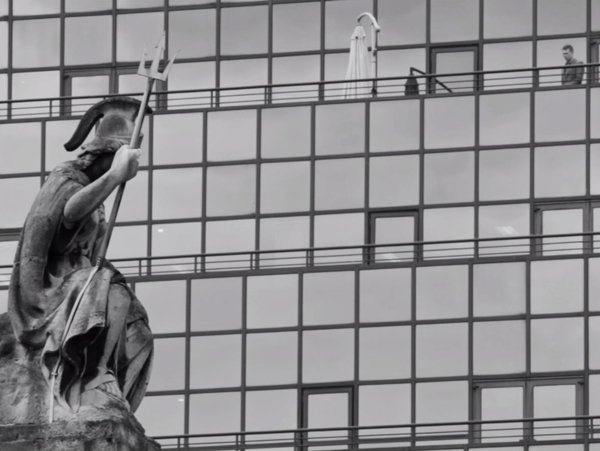