The Venice International Film Festival [2] has a way of making the time fly–despite the occasional feeling when standing in line for a film that the doors will never open. It seems ages ago that we saw the early-morning press screening of First Man, and yet a mere three days have passed.

So far we’ve had the rare experience of each morning seeing another exciting, excellent, thoroughly satisfying film: First Man (which David has already written about [3]), Alfonso Cuarón’s Roma, and the Coen Brothers’ The Ballad of Buster Scruggs. Can this last? Probably not, but the rest of the program offers rewarding films and so far seems to justify journalists’ claims that this year’s festival is boosting its already growing reputation.

A new (and laudable) tradition? 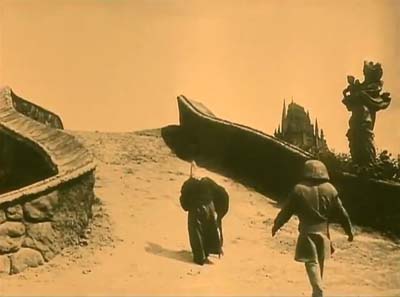 Last year we reported on [5] the restored print of Lubitsch’s 1923 Rosita, which played on the evening before the official start of the festival, accompanied by an orchestra playing a restoration of the original score, edited and conducted by Gillian Anderson. This year the festival organizers followed up on that success by premiering the restored Der Golem (Carl Boese and Paul Wegener).

The large and enthusiastic crowd showed that, given the right presentation, this old film can attract those who think of the festival primarily as a place to see brand-new films before the rest of the world does. In fact, there’s also a healthy restoration thread running through the festival, though silent films tend not to figure in it.

Der Golem is noteworthy as one of a small number of relatively sympathetic Jewish-themed films that came out in the early to mid-1920s in Germany. (I recently wrote about [6] this trend and the newly restored Der alte Gesetz.) It does not manage entirely to avoid stereotypes, but it should be pointed out that the Christian characters come across far worse.

Der Golem is an early entry in the German Expressionist film movement of the 1920s, having come out in 1920, the same year as Das Cabinet des Dr. Caligari. Rather than using painted flats to create a stark, graphic look, as Caligari did, Boese and Wegener’s film features the droopy-clay look employed by Hans Poelzig, perhaps the finest of the Expressionist architects of the day. The result is that the clay buildings of the ghetto and the clay Golem seem at times to merge into each other. 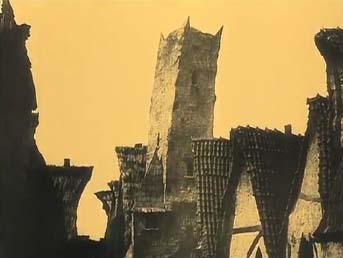 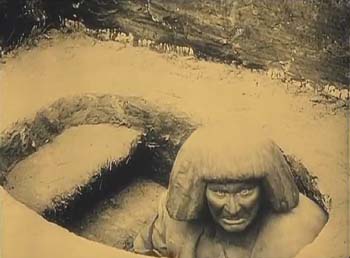 The print looks much better than previous copies available. The Belgian Cinematek held an original negative, thought to be the one for German distribution, rather than the second negative shot for foreign distribution. Prints held in other archives supplied missing footage, as well as tinting and toning information and the graphics for some of the intertitles. The drop in clarity is apparent in the replaced passages, which, interestingly, include the sequence in which Rabbi Löw summons a demon to give him the magical name that will bring the Golem to life. Why this key moment was removed from the negative will probably remain a mystery.

The musical accompaniment was a modern composition by the six members of the Mesimér Ensemble. It fits the current fashion for highly dissonant scores, including the seemingly de rigueur vocal passages. It went well with the film.

I hope the festival organizers will continue this tradition of presenting restored silent films with musical accompaniment as a prelude to the festival. It makes for a relaxing transition into the more film-filled days to come.

After the critical and commercial success of Gravity (2013), which I wrote about here [10] and here [11], there has been much curiosity about Alfonso Cuarón’s long-anticipated next film, Roma. Advance word had it that the film was to be shot in Mexico and in Spanish.

As I’ve already suggested, the film is splendid, and its black-and-white, widescreen images looked great on the huge Salla Darsena screen (from front row, center, of course). As with Zama [12] last year, at the end David asked if we had just seen a masterpiece. Again neither of us had any doubt that we had.

The film may be based on Cuarón’s childhood memories, but it is hardly autobiographical. Instead the protagonist is Cleo, one of the indigenous maids who work for the upper-middle-class family whose dramatic arc parallels her own. Conventionally the maids Cleo and Adela would be present in the backgrounds of scenes or at best be supporting characters. Instead Cleo is our identification figure. Indeed, of the four children of the family, three of them boys, we never have a clue as to which one might represent the director.

The double plot revolves around two desertions. First the husband and father of the family departs on an ostensible trip to a conference in Canada, which is soon revealed as a cover for his leaving his wife for another woman.  AT the same time, Cleo is dating a man who professes to love her but who deserts her the moment she reveals she is pregnant.

One might expect this sympathetic tale centered largely around Cleo to center on the family’s harsh treatment of her. Instead, the cruelty is muted and casual. The children clearly adore her, and she them, and the wife says at one point that she loves Cleo as well. Far from firing Cleo upon learning of the pregnancy, the wife comforts her, pays for medical treatment at the family’s hospital, and buys her supplies that she will need. Yet the unkindness is apparent as well. The wife curtly tells Cleo to clean up the dog turds in the courtyard–the accumulation of which provides a running gag. She also carelessly leaves Cleo, who cannot swim, to watch the unruly children at a beach with dangerous waves. This unreasonable demand precipitates one of the film’s most dramatic scenes, shot in an excrutiatingly suspenseful long take.

Cuarón directs with his usual utter control and flair. The film is set in 1971 (when the director would have been ten years old), and the period details are impeccable–especially the family’s Ford Galaxie, which provides a running gag whenf characters try to maneuver it into a narrow garage.

There are the expected long takes and camera movement. One fast tracking shot races along the middle of a busy street, keeping up with Cleo and Adela as they run joyously along block after block to enjoy their time off (top). In another scene, the camera wanders around the upper floor of a furniture store as Cleo shops for a crib, only to end with a pan to the windows and the revelation of the street below full of rioters.

In the ongoing controversy over Netflix’s reluctance to release its productions in theaters, it is particularly ironic that it should be the studio to produce Cuarón’s big-scale film. The promise is that it will be released “in select theaters.” If you live near one of those, don’t miss it. 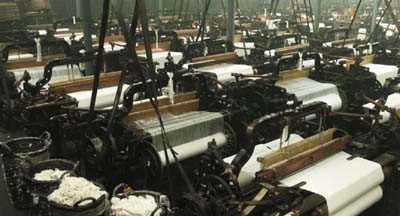 I had hopes of medium height that Mike Leigh’s Peterloo would live up to his previous historical films, Topsy-Turvy (1999) and Mr. Turner (2014). It turned out that Leigh had taken on a project with nearly insuperable obstacles.

While Topsy-Turvy had Gilbert and Sullivan, with its musical numbers and the innate drama of the pair’s occasionally testy relations, and Mr. Turner had painting and a single eccentric personality to focus on, Peterloo is about radical politics. The Peterloo massacre of 1819, which perforce occurs only in the climax of the two-and-a-half-hour film, is a major incident in the history of British radicalism and reform, and it is relatively well-known to the citizens of Great Britain. Elsewhere audiences are likely to be unaware of it.

As a result, Leigh must present a great deal of exposition about the issues and the lead-up to the peaceful protest march at St. Peter’s Field in the Manchester area. The exposition takes the form of a long series of speeches and conversations about those issues. The speeches are largely taken from the historical record, and they impart a great deal of authentic historical information, but they frequently overwhelm the drama.

Many of the speakers are historical characters, about whom we learn relatively little. Leigh humanizes the situation by focusing at intervals on a single poverty-stricken family whose adult men work at the local weaving mills and face dwindling wages from the mill-owners.The opening is clearly intended both to provide a bit of violent action as a hint of things to come, much later, and to introduce us to a young bugler who belongs that poverty-stricken family. We follow his trek home, his arrival there, and, briefly, his fruitless search for work.

If we expect him to become an active protagonist, however, we are disappointed, for he recurs only occasionally and passively thereafter. Instead we move around the various occasions on which speeches are given to rouse the downtrodden population to action. It must, after all, be plausible that roughly 70,000 people from the area would assemble in Manchester for a peaceable demonstration for the vote and representation in Parliament.

The local politicians who attempt to thwart the protest and possible resulting violence are portrayed as old, ugly, and nearly hysterical in their mingled fear of and contempt for the working classes. Their fears aren’t entirely unreasonable, given that the Luddite movement of 1812 led workers to destroy the labor-saving automatic looms and occasionally the factories that held them. Violence had killed people on both sides of the struggle. Leigh perhaps hints at the “machine-breakers” in his shots of the vast mill interior (above) and some of the dialogue, but only someone familiar with British history of the era would link the Peterlook protestors to the Luddites.

The result somewhat resembles the Soviet Socialist Realist films of the 1930s and 1940s, with their noble peasants and caricatured bourgeoisie and government officials. Not that there’s anything wrong with that, exactly, but the Soviet films seldom tried for actual realism, and Leigh cannot entirely give up his passion for naturalism. The result is an uneasy mixture in Peterloo‘s tone.

Despite its faults, the film is impressive. Produced, again ironically, by Amazon, the film has what must have been Leigh’s biggest budget to date. Authentic costumes have been created for actors and extras enough to at least suggest the tens of thousands present that day (below). The mill and the surrounding slum are convincing, and Leigh has managed to find some unspoiled landscapes to provide a relief from the grimness of working-class life in the era. Amazon will release it in the US on November 9, as part of the film’s slightly premature celebration of the 200th anniversary of the event.

Check out our Instagram page [16] for ongoing photos from the festival.

As ever, thanks to Paolo Baratta, Alberto Barbera, Peter Cowie, Michela Lazzarin, and all their colleagues for their warm welcome of us to this year’s Biennale.

October 31, 2018: Netflix has announced [17] that it will give Roma a theatrical release, starting on November 21 in New York and Los Angeles; it will be in more theaters starting December 7 and open wider on December 14. It will been seen theatrically in 20 countries. There will be several theaters showing it in 70mm. 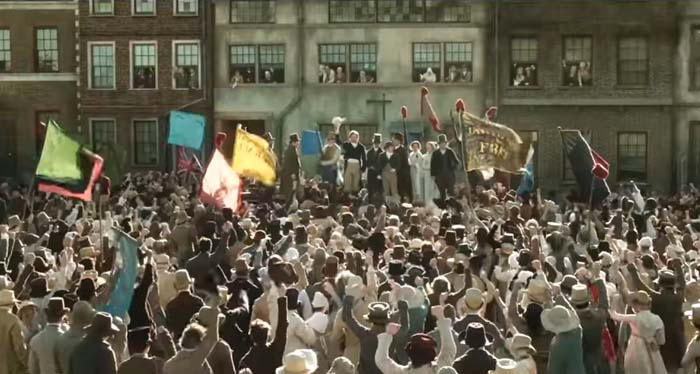