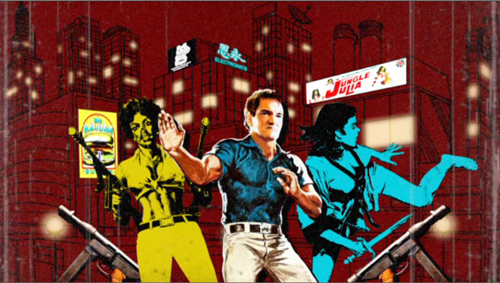 The Disciple of Hong Kong.

First, if you haven’t yet visited Jim Emerson’s Scanners blog entry on “Geriatric Noir,” [2] you must do it pronto. It confirms once more the spontaneous genius of the American people. We are the world’s very best at smart-alec, disrespectful, shameless humor.

Second, I’ve just received an advance copy of Jac and Johan’s film The Disciple of Hong Kong. It’s an essay on Tarantino’s debt to Hong Kong film. Twitch announced it here [3], and you can watch the trailer here [4].

This is a fan’s fever dream. It features interviews with many HK film experts like Roger Garcia and Bey Logan, along with local legends Raymond Chow, Ringo Lam, Simon Yam, and Gordon Liu, below. The movie is a load of fun, with many clever retro touches, and I learned a lot from it. 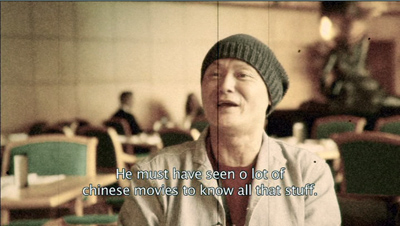 I wander in from time to time, with probably my most significant line being “Excuse me, do you have any syrup?”

It’s coming up on 26 June on a French channel dedicated to action films [6]. I don’t know exactly when it will be available otherwise. For some clues to the identity of directors Jac and Johan, go here [7]. Frederic Ambroisine, another HK film expert, was involved with the project as well. His site [8] is a remarkable video resource, and he currently writes at actionqueens.com [9] and alivenotdead.com [10].

Third and finally, Kristin and I are soon off to Bologna’s Cinema Ritrovato [11]. We will be blogging.

Speaking of shameless: To get more of my take on HK cinema, visit the Hong Kong national cinema category below. If you’re really devoted, or just at a loss for how to spend $15, pick up a copy of my e-book [12]Planet Hong Kong [12].