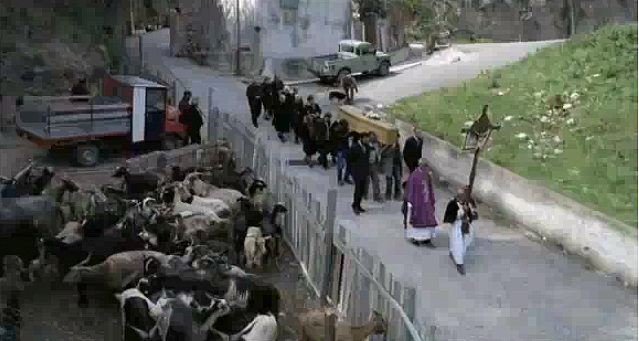 As happened last year [2], I had to flee Hong Kong for medical reasons. Beset by a wracking cough, I took off three days early and upon returning to Madison wound up in hospital. Current diagnosis: pneumonia. Duration of stay: six nights and counting. A drag. But I’m lucky: no disorderly orderlies, no homicidal doctors injecting me with mind-control drugs (“You will watch only Brett Ratner films for the rest of your life. Sleep, sleep…”). I’m taken care of by expert, calm, and good-natured people. Expect no less from the best city for men’s health and care [3].

So I’ve been tardy in writing this final HK blog. I just wanted to talk about two extraordinary films I saw in my final days and bring up a scrap of news for followers of Chinese film. 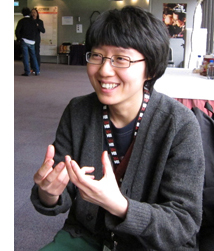 [4]First, the news. Liu Jiayin, of Oxhide fame, was in Hong Kong briefly to accept an Asian Film Financing Forum award for her screenplay Clean and Bright. The other winner was Li Ruijun, for his project Where Is My Home? Liu was about to visit the US for screenings at Redcat [5], under the sponsorship of the tireless Bérénice Reynaud, and at Cinema Pacific in Portland [6]. I had a chance to talk briefly with her just before she departed.

Regular readers of this blog know my admiration [7] for Liu’s two Oxhide films. The good news is that she is at work on Oxhide III. She wouldn’t say much about it, except that she is still reworking the script, but it sounded quite far along. In addition, she hopes to shoot Clean and Bright, a more orthodox film about a family, fairly soon as well. Oxhide IV is also planned, with the series running up to perhaps eight installments.

For more on Oxhide, including purchase information for the DVD, check Kevin Lee’s dGenerate Films website [8]. 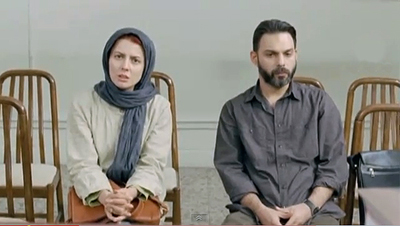 Too often we think of suspense as specific to certain genres, but it’s actually a fundamental resource of all storytelling. Creating expectations about an upcoming event, sharpening them, and delaying their fulfillment–all these strategies are basic, I think, to narrative experience in general. Although some plots emphasize suspense more than others, even most “character-centered” tales wouldn’t engage us without a dose of it.

True, sometimes there’s a sort of bait-and-switch, as when suspense is conjured up but eventually dissolved. Sooner or later we realize Godot isn’t going to show up, or that Anna in L’Avventura is likely not to be found. In those cases, suspense has led us to another terrain, usually thematic, in which we’re invited to consider something more significant than learning the outcome of events. (Sometimes, though, snuffing out suspense is just a sign of slack, or Slacker, storytelling.)

Suspense is usually associated with popular plotting, so many people expect Serious Films to be lacking in suspense. Which makes it all the more interesting that Iran, one of the most-favored nations on the festival circuit, has made something of a specialty of suspenseful art movies.

We don’t recognize often enough that Kiarostami’s early films are often structured as suspenseful quests, from the boy’s attempt to return his schoolmate’s notebook in Where Is the Friend’s Home? to the final shot of Through the Olive Trees. His scripts for other directors convey this quality even more clearly. The Key is almost Griffithian in showing how a four-year-old boy struggles to rescue his younger brother when they’re locked in a kitchen with a gas leak. The Journey (Safar) is positively Ruth Rendellian: A headstrong middle-class father leaving Tehran with his family forces another car off the road and flees the scene. Instead of resting at a summer retreat, he returns obsessively to the place of the accident to check the progress of the investigation: Will he give himself away? And it isn’t just Kiarostami. Look at the suspense structure in Makhmalbaf’s Moment of Innocence, or Reza Mir-Karimi’s The Child and the Soldier, or Panahi’s The Circle.

What gives Iranian suspense films their weight is partly the fact that they don’t rely so much on the old standbys (chases, stalkings, cliffhanging rescues) but rather on psychological maneuvers, carried out largely through dialogue. Characters in these movies tend to talk a lot, pushing their concerns forward with a stubbornness that we seldom see in other national cinemas. People stick up for themselves, and the suspense comes from a clash of testimonies, pleas, and self-justifications. But it also comes from a moral dimension. My earlier examples depend on our assessing what we ought to happen (the hero of the Journey should be punished) versus what we might want to happen (he should escape). Add a dash of mystery, as we have in Through the Olive Trees (what is Tehereh thinking?) and A Taste of Cherry (what is the job Mr. Badi is hiring for?), and you have artistically ambitious filmmaking that exploits some very traditional resources of the art form.

These resources were on display in Asgar Farhadi’s earlier About Elly, which I praised in these pages [10] two years ago. Nader and Simin, A Separation has a comparable power to seize and hold our interest. A wife fails to get a divorce and leaves the household, which includes not only her husband Nader but his Alzheimer’s-addled father and their daughter Termeh. Without Simin to care for his father, Nader hires Razieh, a working-class woman who must bring her little girl with her. Soon the job overwhelms Razieh and, for reasons not disclosed till later, she goes missing. Nader and Termeh find the old man tied to the bed, unconscious.

For this early stretch of the film, the helper Razieh trembles on the verge of hysteria, and only later do we learn why. When she returns to the apartment, she confronts Nader’s wrath, which leads to yet another turning point, but one whose significance we realize only later. To complicate matters, Razieh’s hot-headed husband becomes furious with everyone. As in About Elly, a great deal turns on what characters know at one precise moment, and our memory of when they learned something can be as elusive as theirs. And as in Henry James’ novels, much of the action is registered through the reactions of onlookers, notably the pensive daughter Termeh (below), who turns out in the final scene to be as important as any other figure in the film.

The suspense builds on many levels: the progress of the divorce, the decline of the old man, the court case that involves Razieh’s place in the household (did she steal money?), and above all the responsibility for a death. Some of these lines of action are shown resolved; a crucial one remains suspended. And that does, as often happens, oblige us to think more broadly about the film’s treatment of parent/ child relationships. We are left with an exceptionally rich film, one reflecting on class differences, religious ones, and the effects of adult problems on the children around them. Suspense not only feeds our hunger for story; it can also tease us to moral reflection, and Nader and Simin does just that. 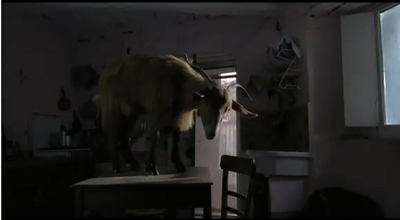 How much can you purge suspense from a movie? And if you play it down, what do you put in its place to hold our interest?

One answer to these questions comes in Michelangelo Frammartino’s Le Quattro Volte. It is one of those sedate observational pieces that covers a year in the life of a village, with not much discernible dialogue but lots of lovely landscape shots. It has a cyclical rather than linear structure, beginning and ending with smoldering wood turned into charcoal–itself a metaphor for the inevitable transmutations that govern plants, animals, and men. We follow an old goatherd who eventually dies; his goats pay homage by climbing precariously to his tiny home and occupying it. A young goat is born soon after the old man’s death. The townsfolk erect an enormous Christmas tree, which at the end of the holiday is chopped down into bits, which will in turn becomes charcoal. If Nader and Simin exists largely in medium-shot, here the extreme long-shot dominates. There are no psychological interactions or dramatic issues of the sort we find in Fahradi’s films. In the rustic spirit of Rouquier’s Farrebique, we get the sheer successiveness of things, the fact that life is one damned, or placid, moment after another.

So suspense can be replaced by sheer consecutiveness, but the task then becomes to make things interesting. Frammartino does so through careful framing, evocative sound, and crisp storytelling technique. The goats pick their way up to the old man’s hillside apartment; they jostle around inside; cut to a shot of the old man’s head as he lies dead; cut to the church, with people filing out as the bell tolls. In addition , you can find suspense at more micro-levels, working not at the level of plot action as a whole but rather within and across particular scenes. After the goatherd’s death, we see another kid born: this is familiar, even clichéd, the rhythm of nature. We follow the kid’s efforts to assimilate to the herd. But as winter comes, the kid strays off, becomes isolated, and ends up lost and shivering. We must assume that he dies. So much for the great cycle of life.

At a still more microscopic level comes the shot that everyone remembers from Le Quattro Volte. It’s so salient that critics who seldom notice imagery can’t help but mention it [12]. I won’t describe it in detail, so as not spoil the surprises, but suffice it to say that it involves a church procession, some intransigent goats, a pickup truck, and a resourceful dog. Reminiscent of Tati or Suleiman, this long shot depends on ratcheting up our expectations about how several converging events might develop, onscreen or off, and then fulfilling those expectations in startling ways. We might call the result spatial suspense: How will this composition-in-time finally resolve itself?

We should, then, never underestimate the power of suspense, even in those films which might seem to forswear it. Melodrama or pastoral, any genre can find a way to excite us by asking what can come next.

Catching up: By leaving Hong Kong early I missed the second screening of The Turin Horse; my first impressions are here [13]. Since I wrote that, I learned that Cinema Scope has published Robert Koehler’s sensitive appreciation of the film and his enlightening interview with the cinematographer Fred Kelemen. 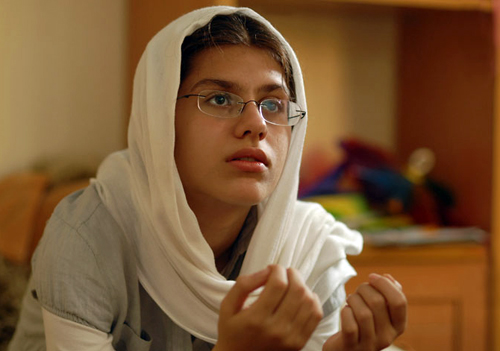 Nader and Sinin, A Separation.