Examinations of social problems and portrayals of downtrodden people are fertile ground for makers of art cinema. This year’s festival [2]saw many films from around the world tackling such subjects in original ways. Here are four impressive instances. 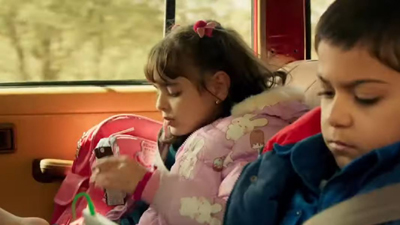 Reza Mirkarimi is one of Iran’s top filmmakers, with three of his films having been put forward as Iran’s nominee for an Academy Award. In Castle of Dreams he has created a sort of nightmare version of the traditional child-quest tale so popular when Kiarostami and Makhmalbaf were at the heights of their careers. The protagonist, Jalal, has recently been in jail. The film opens as he is making some sort of a deal by telephone. His wife has just died after a protracted illness, and his sister-in-law, who had been taking care of Jalal’s two young children, is forced by her husband to turn them over to Jalal. But he clearly wants nothing to do with them.

Jalal sets out with them in his late wife’s car, picking up his Azeri fiancée on the way to Azerbaijan. He continuously snaps at the small children, Sara and Ali, and at his fiancée. It eventually comes out that he had taken his wife off life support and sold her heart for transplant, all without telling her brothers. Despite his occasional clumsy attempts to be kind to the children, any expectations that the audience may have that he will be charmed by them and transform into a responsible father are far too optimistic.

If this were a traditional child-quest plot, Sara and Ali might struggle to get back to their kindly aunt. Here, despite becoming increasingly miserable as Jalal’s full villainy is revealed, they are essentially prisoners in the back seat of the car (above).  Ultimately the film takes a clear-eyed, realistic view of the future for this little family.

The acting carries much of the film. Hamed Behdad won a best-actor award at the Shanghai International Film Festival (where the film also won the best-picture prize). The child actors are charming and elicit considerable sympathy for their plight. 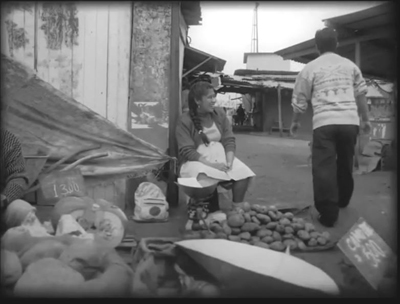 Inspired by a real-life case that her journalist father investigated, Melina León’s first feature successfully generates sympathy for her two main characters and recalls the horrors of the past. Set in 1988, it follows Georgia, a pregnant indigenous woman living in a shack near the sea and scraping by as a street-seller of potatoes (above). Lured in by a radio ad, she visits a free clinic with a reassuring name, the “Saint Benedict.” The organization is anything but benevolent, however, spiriting her newborn daughter away for “check-ups.” Desperate to find the baby, she and her partner Leo encounter only indifferent police and other other government officials.

Eventually she finds a sympathetic helper in Pedro, a reporter who confidently promises that they will recover her baby, despite the fact that it has most likely been spirited out of the country for adoption. While Pedro pursues his investigation, Georgina finds her ability to purchase wholesale potatoes shrink in the face of rampant inflation, on top of which she discovers that Leo is apparently a member of the Shining Path terrorist group. Pedro meanwhile starts an affair with a gay actor in his apartment block, only to be threatened with exposure and death, presumably by the gang that runs the baby-stealing operation.

The film will inevitably be compared to Roma, even thought the films have nothing substantive in common. Both are black-and-white, Latin American films, and both heroines are pregnant; that’s the extent of the resemblance. León’s film has nothing of the nostalgia that permeates Roma, and Georgina is far more marginalized and downtrodden than Cuarón’s heroine.

León also is working with a far smaller budget and yet with the help of cinematographer Inti Briones she has fashioned a sophisticated and lovely film. One lengthy shot is particularly impressive. In it Pedro meets with a potential witness in a small motor boat. The camera, in another boat, catches it as a pulls away from the dock and glides around it as it turns, 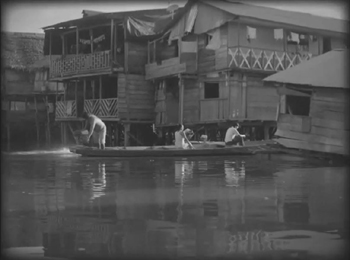 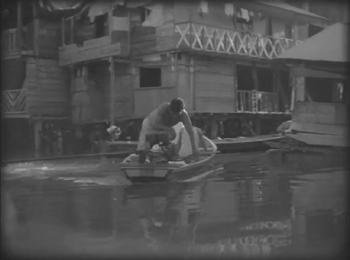 The camera moves rightward with the boat but also moves in to show the woman sitting, apparently alone, in the boat. 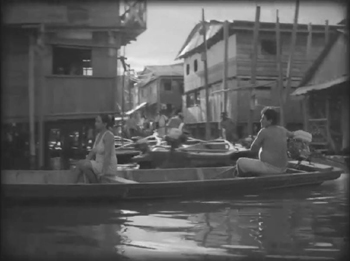 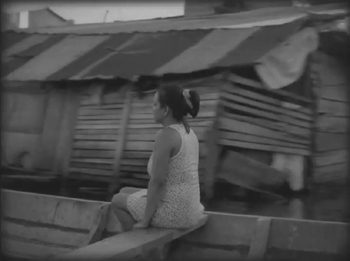 A move further away establishes that Pedro is present, and we watch as the woman walks forward to sit beside him. 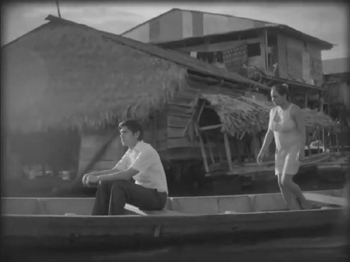 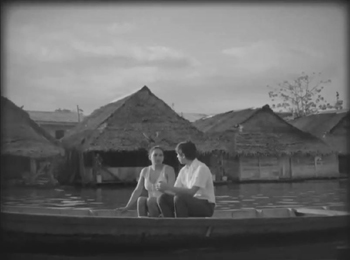 As she warns him of the danger of pursuing the kidnapping gang, the camera moves slowly in to emphasize her revelation that years before she had sold her baby to them 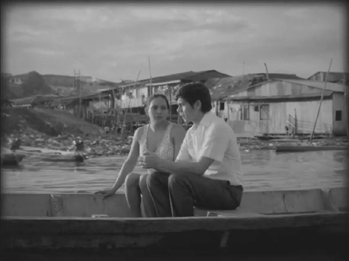 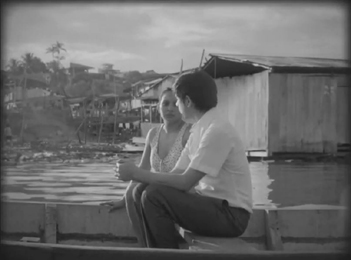 All the while the huge shantytown glides past in the background, emphasizes the extent of the poverty in the outskirts of Lima. The choreography of camera and action in this two-minutes-plus shot could hardly be bettered in a production with many times the budget. (A clip of this long take [13] is currently posted on Youtube.)

The title seems to refer to the lullaby that Georgina sings, just calling her lost child “baby” because she never was given a name.

The film played in the Directors’ Fortnight at Cannes, where it received positive reviews in Variety [14] and The Hollywood Reporter [15]. It deserves further festival play, and we can hope that León can follow up with other films. 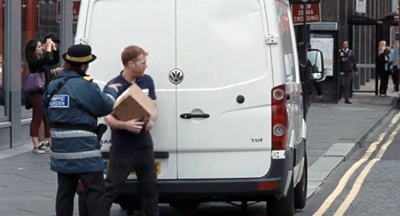 Then there is, Ken Loach, the veteran English filmmaker who continues to deal movingly with the plight of working-class people. In Sorry We Missed You–which deceptively sounds like a title for a comedy–tackles the gig economy and its grinding effect on one industrious couple and their children.

The inevitability of bad consequences seems obvious as the husband of the family, Ricky, agrees to become a driver for an express delivery service which transports packages for the likes of Amazon and other online sellers. He is not an employee but an independent agent, the supervisor emphasizes. Buying his own van supposedly will cost less than leasing, so he sells the family car for a down payment. His wife Debbie, a caregiver for home-bound elderly and handicapped people, is forced to take the bus to her widely scattered clients.

The couple’s long hours begin to tell on their teen-age son, who is turning into a school-skipping, graffiti-spraying delinquent, and their younger daughter, who is crushed by the stress of watching her family falling apart.

Loach is expert in depicting the challenges of such a job, from the pressure for drivers to load packages onto the van rapidly (bottom) to Ricky’s indecision over whether to risk a fine for illegal parking or deliver a package late (above). As he misses deadlines and skips work over family crises, the company’s sanctions and fines begin to accumulate. Ricky spirals into debt. Debbie, torn between duty to her family and the people who depend on her, faces similar problems in dealing with her helpless clients.

There is no happy ending here, though there is some suggestion that the dire situation of the family at least forces them to try and help each other out. Loach has created a plausible, gradual descent into near despair. He portrays the pressures of large companies and organizations that expect much of their “independent contractors” but offer little support in return.

At first glance, Bacurau represents a considerable departure from Kleber Mendoça Filho’s two previous films, both of which we saw at VIFF, Neighboring Sounds [18] and Aquarius [19]. Both dealt with unscrupulous methods used by real estate dealers to push people out of older neighborhoods to make way for gentrification. Now, co-directing with Juliano Dornelles (the production designer on the two previous films), Filho departs from the big city for a small village in the wilds of northern Brazil. The village, by the way, is imaginary, a fact that provides a running joke about the characters’ inability to find it on maps.

Someone in power wants the villagers to leave, again to make way for the exploitation of the land for undisclosed purposes. In a way, it’s not such a departure from the previous films as it seems. Blocked water sources  and inadequate food deliveries have failed to budge the villagers, who make do on their own. The film opens with two villagers in a tanker truck full of water bound for Bacurau (above).

Having failed to uproot these determined peasants, the unseen power has brought in a group of wealthy hunters who are keen to gun down human beings and have been given carte blanche to exterminate the entire village. Delivery trucks appear with cargoes not of food but of dozens of empty coffins, a few of which are soon used for the first victims of the hunters (see top).

Despite the suspenseful and sometimes gory action, the film has considerable humor. It soon turns into a modern version of the politically charged Cinema Novo films of Brazil in the 1960s and 1970s. The peasants prove less helpless than they initially appear, and soon the hunted are hunting their hunters.

By this point members of the audience with whom we saw the film were cheering, and obviously there was a contingent of Brazilian speakers who got some jokes that we didn’t.

All in all, it’s a wild, entertaining film, though not for the faint of heart.

We thank Alan Franey, PoChu Auyeung, Jenny Lee Craig, Mikaela Joy Asfour, and their colleagues at VIFF for all their kind assistance. Thanks as well to Bob Davis, Shelly Kraicer, Maggie Lee, and Tom Charity for invigorating conversations about movies. 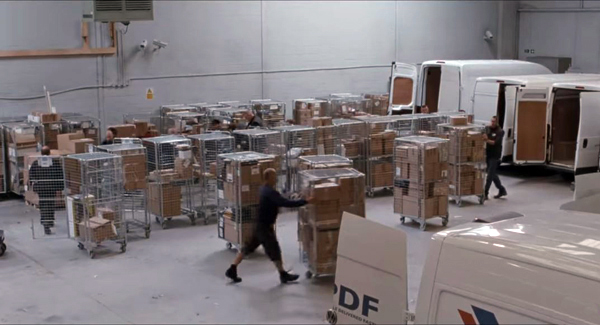