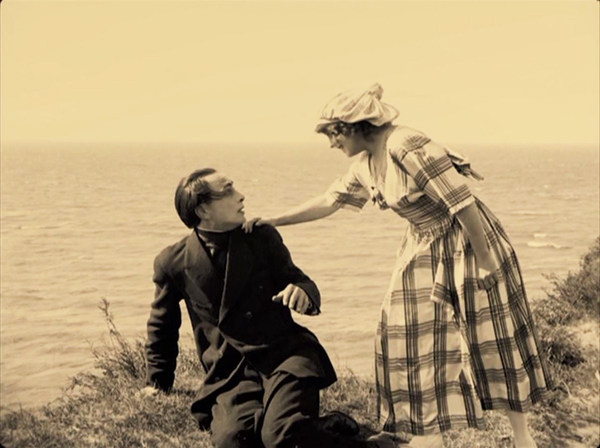 Back in 2016, the Munich Film Archive gave us a preview of the restored version of F. W. Murnau’s earliest surviving film, Der Gang in die Nacht (1921). The print was splendid, and David posted an entry [2] in which he analyzed the film’s style and situated it in the context of German cinema in the early post-World War I years. He tied the film to the tableau style that developed in much of the world outside the USA during the 1910s and which began to adjust to Hollywood norms of continuity editing just when Murnau was making films like Der Gang in die Nacht.

In that entry he used several frames from the restoration, and a glance over it will show its spectacular visual quality. I won’t spend much time on that film here, since David covered it so thoroughly. He wrote, “We can hope that the film will soon appear on DVD. Remember DVDs?” He and I certainly do. The Edition Filmmuseum obviously does as well. They continue to release their restorations and collections of more recent experimental films solely on DVD. Maybe Blu-rays are simply too expensive to produce, or perhaps the staff there consider Blu-rays a passing fad, like talkies. At any rate, this DVD release looks great (see above). it can easily be ordered from the Edition Filmmuseum’s shop (English page) [3].

Apart from the tableau staging and the proto-continuity cut-ins that David discusses, there are some impressive depth shots–involving, as often happens in 1910s films, spectators in a theater box with the stage in the distance. 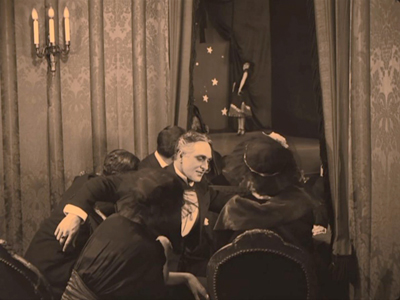 The film was restored from the original camera negative, though negatives were not edited in the final form of the film. By studying Murnau’s shooting script and restoration work previously done by Enno Patalas, the team were able to reconstruct the films’s editing and intertitles. The tinting and toning are based on the conventions of the period and are thoroughly plausible. David’s remarks in his earlier post are condensed slightly into this still applicable summary quoted in Stefan Drössler’s notes on the film:

The Munich Film Museum’s team has created one of the most beautiful editions of a silent film I’ve ever seen. You look at these shots and realize that most versions of silent films are deeply unfaithful to what early audiences saw. In those days, the camera negative was usually the printing negative, so what was recorded got onto the screen. The new Munich restoration allows you to see everything in the frame, with a marvelous translucence and density of detail. Forget High Frame Rate: This is hypnotic, immersive cinema.

The DVD lives up to that description. 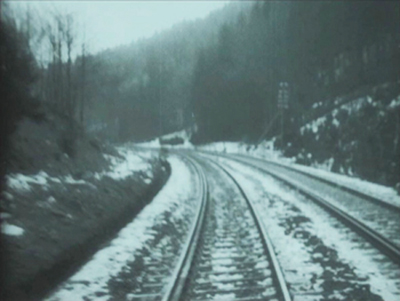 Without much fanfare, this release also contains another major classic of 1921, Scherben (“Shattered” or more literally “Fragments”). Its director, Lupu Pick, is probably best known today from his performance as the tragic Japanese spy, Dr. Masimoto, in Fritz Lang’s Spione (1928). He was, however, a prolific director from 1918 to 1931. (His acting career lasted from 1910 to 1928.) Many of his films are apparently lost, though I have seen two: Mr. Wu (1918) and Das Panzergewölbe (1924), both good but conventional films.

As a director, however, he is best known for making two of the main films in the brief vogue for Kammerspiele: Scherben and Sylvester, or New Year’s Eve (1923). These two films were scripted by Carl Mayer, who, as Anton Kaes points out in the accompanying booklet, wrote all the German Kammerspiele films: Hintertreppe (1921, dir. Leopold Jessner), Sylvester, and Der letzte Mann (1924, dir. Murnau). One might add Carl Theodor Dreyer’s Michael [6] (1924), shot in Germany and scripted by Thea von Harbau.

Mayer was all in favor of films with no intertitles–though in practice that meant almost none. Der letzte Mann is one such, with an expository title introducing the sarcastic happy ending that Mayer was forced to add. Scherben is another. Near the end there is a single dialogue title. Moreover, Scherben’s subtitle is Ein deutsches Filmkammerspiel: Drama in fünf Tage.  The five days are divided into the five reels of the film, and each is introduced by an expository title. There are a few letters and other texts that convey vital information, but overall the action is presented pictorially.

Scherben might be said to represent the slow cinema of its day. Its remarkable and lengthy opening shot is filmed from the front of a slowly moving train, simply showing progress along a track in a snowy landscape (above).

The main character (played by Werner Krauss, famous as Dr. Caligari) is a linesman, living with his wife and daughter in an isolated house. Their stultifying daily routine is gradually set up during the early scenes. Drama is introduced when a railroad inspector comes to visit, staying with the family. He and the daughter are immediately attracted to each other, spending a night together. The wife discovers this, staggers out into the snow to pray at a local shrine, and freezes to death. The tragedy deepens from there.

The film proceeds at the notoriously languid pace of German art films of the period. Pick injects stylistic flourishes derived from trends of the period. For some reason, the hallway of the family’s house has little Expressionistic painted highlights dotted around it. 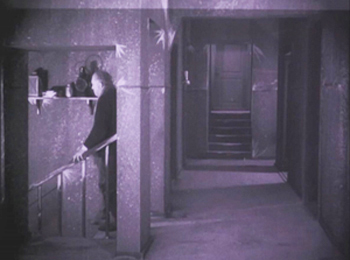 Werner Krauss often acts “with his back,” well before Emil Jannings was praised for doing so in the framing prison scenes of E. A. Dupont’s Variety (1925.) 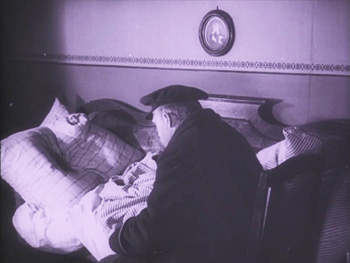 Pick calls upon the 1910s obsession with mirrors when the inspector reacts to accusations that he has seduced the linesman’s daughter. 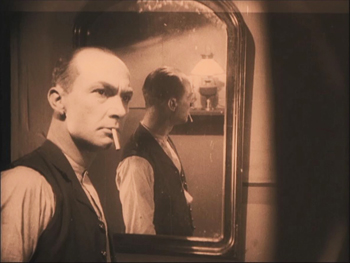 Pick also evokes the depth staging of the tableau style, with small areas of the screen glimpsed in the background, most notably in the scene where the mother discovers the lovers together. (See below.)

The print is not as spectacular as that of Der Gang in die Nacht, having been reconstructed from prints in the Gosfilmofond archive in Moscow and the Bundesarchiv in Berlin without extensive digital restoration. Still, we should be glad to have this milestone film available. Taken together, the two films make a welcome addition to the number of German classics available for home viewing and classroom use. 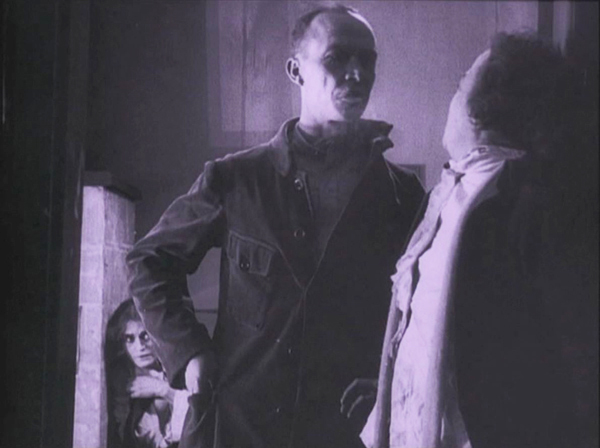