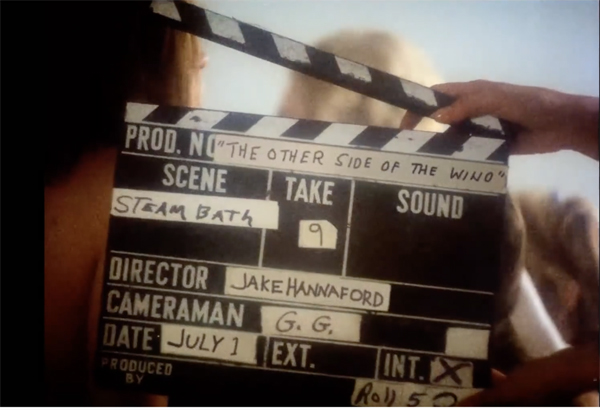 The Venice Biennale film festival [2] unveiled to a panting cinephile public the long-rumored Welles film The Other Side of the Wind, now reconstructed thirty-three years after its director’s death. This is only one of many possible versions. Welles reportedly edited two scenes himself, including an erotic encounter in a rainstorm-shaken car, but the rest has been assembled from about a hundred hours of footage. (But see the PS in the codicil below.) Welles left many notes but no definitive script, so editor Bob Murawski, with guidance from many Welles experts, has carved out something that must stand as a best approximation what its initiator had in mind.

Approximation is also the word for my response. I need to see the film more than once in order to get to grips with it. Not that it’s a dense, complex work; I don’t think it is. It’s just that I need to shake off a sense of déja vu.

Or rather, déja lu. Having read about the film for years, I found almost nothing onscreen that I hadn’t been primed for by press coverage, by Joe McBride’s What Ever Happened to Orson Welles? [3], and by Josh Karp’s Orson Welles’s Last Movie [4]. I found myself groping for a triple vision: How to imagine seeing the film fresh, without knowing its plot, characterization, and most pungent lines already? And then, how would it have looked and felt in the context of  1970s filmmaking? Finally, of course, how to consider it now, in the context of modern cinema?

Sorry, but I’m far from having an answer to any of these questions. Herewith, just some things that the film made me think about. 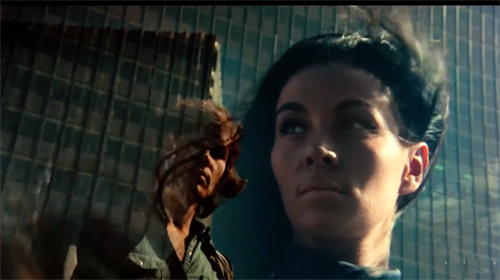 One persistent narrative premise, on stage and screen, might be called the climactic gathering. The plot is concentrated in a limited space and a short span of time–a day, or better, a night. The occasion is a meeting or party that brings together friends, acquaintances, associates, or kinfolk. As time passes, quarrels break out, old wounds rip open, and eventually family secrets and past transgressions are exposed. Examples of this dramaturgy are O’Neill’s Long Day’s Journey into Night, Albee’s Who’s Afraid of Virginia Woolf?, and films like Twelve Angry Men, A Wedding, Margin Call, and The Celebration.

The advantages of this format are many. The limits of time and place realistically assemble characters for intense confrontations, and those can be interwoven quickly to maintain audience interest. Actors like such a setup because the deterioration of civility that usually comes with the situation allows them to show a range of emotions that will culminate in bravura breakdowns. But the disadvantage is a certain obviousness: the secrets or suppressed feelings or traumatic memories will have to be stated rather nakedly. Subtlety may not be easy to achieve.

The Other Side of the Wind situates the climactic-gathering format in Movieland. After filming a stretch of director Jake Hannaford’s work in progress, called The Other Side of the Wind, cast and crew and hangers-on drive out to his house. The party aims to celebrate his seventieth birthday and, perhaps, enable him to drum up finishing money. A night of uninhibited drinking and verbal sniping is broken by screenings of parts of Hannaford’s film. At the climax, Hannaford drives away to a fatal car crash.

Welles, being Welles, puts new twists on the template. In Reinventing Hollywood, my book on 1940s cinema, I argued that he, like Hitchcock, was under unusual pressure to keep coming up with new ideas. Both filmmakers were so widely copied that they had to outrun their imitators. As Welles told Gary Graver, his loyal DP in his late years:

His urge to innovate helped fuel the fifteen years he devoted to shooting and cutting The Other Side of the Wind. This jaundiced satire of Hollywood displays some striking formal strategies–some original for the period, some familiar from his other work, but all an effort to galvanize audiences as he had throughout his career. 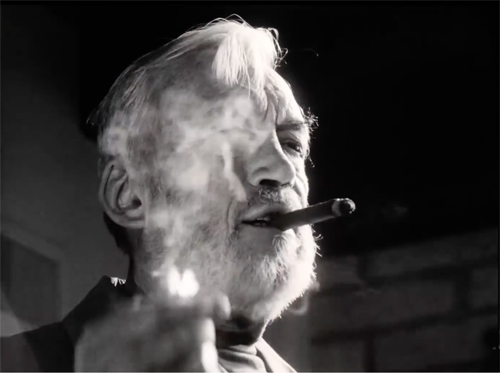 This Hollywood party is rendered in blunt satire and in-jokes. It’s haunted by Mr. Pister (Joseph McBride), a geeky film critic asking questions about phallic symbols and the camera’s quest for reality. A more acerbic critic, Juliet Riche (Susan Strasberg), is a stand-in for Pauline Kael, who wrote a notorious broadside against Welles. Peter Bogdanovich plays the implausibly named Brooks Otterlake,  a younger, successful director who is both a disciple of Hannaford’s (he calls Jake “Skipper” and “Daddy”) and a rival to him. Familiar faces from the studio years–Paul Stewart, Dan Tobin, Mercedes McCambridge–as well as younger figures like Paul Mazursky and Henry Jaglom make appearances. This climactic gathering brings together New Hollywood and Old, even Elderly, Hollywood.

By casting John Huston as the lanky, roguish Hannaford, Welles adds an evocative layer to the citations. Welles had acted in several Huston films; now Huston is in front of the camera, his  face resembling, in Dwight Macdonald’s phrase, a relief map of the Dakota badlands. He was nine years older than Welles, but he made his directorial debut with The Maltese Falcon in the same year as Citizen Kane. Significantly, his star rose after Welles’s fell. By the time Huston won acclaim with The Treasure of the Sierra Madre (1948) and The Asphalt Jungle (1950), Welles was unemployable as a Hollywood director and scrounging work in Europe.

Karp reports that Welles told Huston that his role was a critique of all egotistical directors—“It’s about us, John”—and Welles considered playing the part himself. But Welles wouldn’t have fit the more specific target the film seems to home in on, the swashbuckling filmmakers like Rex Ingram, Howard Hawks, and William Wellman. Huston embodied the hunting-shooting-fishing-punching persona to the full.  In this context, Riche’s suggestion that Jake Hannaford harbors gay desires for his male stars takes on a special bite.

Was Welles taking jabs at Huston’s image? I have to wonder. While Welles was fleeing hotel bills and performing offhand magic on talk shows, Huston maintained an active studio career; he took leave from Other Side to make one of his biggest successes, The Man Who Would Be King (1975). At the least, Hannaford’s climactic gathering can be seen as another sort of convergence, bearing the traces of the contrasting 1970s fates of two prodigious directors who came up together. 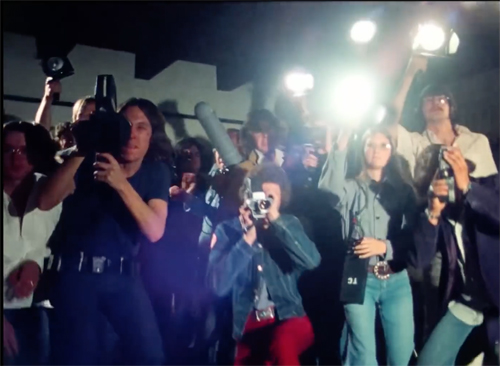 The notion of tracing a day and night in the lives of several movie people was sharpened by Welles’ decision to shoot The Other Side of the Wind in a reflexive cinéma-vérité style. Today we accept a grab-and-go documentary look as a legitimate approach to fictional presentation, but in Other Side the technique is given a realistic pretext. Anticipating the premise of The Office and other TV shows, Welles’ innovation was to provide specific sources for everything we see and hear: an array of cameras and tape recorders. Here even intimate exchanges are captured by at least one camera.

In a way, this idea reverts to Welles’ lifelong interest in the how of storytelling. His radio plays, under the rubric “First Person Singular,” often framed their stories within a narrator’s commentary. This Conradian inclination toward embedded tales, brilliantly managed in his Mercury radio adaptation of Dracula [8], emerged as well in Kane and The Magnificent Ambersons. Other Side’s mosaic of scenic bits harks back to the montage of sources (dance music, government announcement, network news bulletins, voice-over diary entries) that fill the War of the Worlds broadcast (1938).

Like Kane, Other Side opens with the main action already completed. An image of a crumpled car is accompanied by Bogdanovich/Otterlake’s voice explaining that Hannaford died in a crash after his party. (Apparently, Welles would himself have supplied this narration.) That explanation frames the footage that has been assembled documenting Jake’s last day on earth. Embedded in all that material, mostly black and white and in 4:3 format, are scenes from Hannaford’s last movie, in ripe color and widescreen and full of arty compositions and one frequently naked lady. Although they’re motivated as being projected to various audiences in the film, at the end some of the imagery seems to float free, being intercut with the documentary material.

The result is an extended experiment, more radical than even Rear Window, in the Kuleshov effect. Cuts between cameras and partyers, or people in conversation, are linked solely by our understanding of the context; there are few establishing shots. The cuts link shots that were made months or years apart, in any of the many houses Welles commandeered as his sets.

Admittedly, he had been up to such tricks before. The instructive documentary They’ll Love Me When I’m Dead (also screened at Venice) shows an example from Othello of shot/reverse shot cutting based on vast gaps in production time. But Other Side‘s shifting cast and locales have created Welles’s most disjunctive, fragmentary film. I counted about 2300 shots in 117 minutes, an average of three seconds per shot. He applied the same approach in F for Fake (1973), but that feels less scrappy because Welles’s buoyant voice-over glues everything together.

On this blog we try to practice a criticism of enthusiasm, writing mostly about films we admire and avoiding panning the films we don’t. Still, as a lifelong Welles fan, I can’t duck an initial appraisal.

I confess being disappointed by the film. I’m not ready to call it The Other Side of the Windbag, but I’m not sure it escapes the on-the-nose quality we often find in the climactic-gathering format. Here people must get both nasty and horribly transparent about baring their feelings. Moreover, the film-within-the-film, shot in glowing color and abstract cityscapes, is supposed to be a parody of Antonioni (Zabriskie Point in particular), but (a) most of it is more like a slick-magazine version of a trance film from the 40s like Meshes of the Afternoon; and (b) it’s inconceivable that even in the Love Era Hannaford’s project could receive commercial funding or release. It seems to me a bad idea of what a bad movie looks like.

Still, I’m trying to keep an open mind. Watching it more analytically and reading what critics write about it may open it up for me in ways I can’t now predict. For the moment, it’s satisfying enough to thank Netflix for enabling us to see  in however hypothetical a form, what forty years’ fuss has been about.

As ever, thanks to Paolo Baratta, Alberto Barbera, Peter Cowie, Michela Lazzarin, and all their colleagues for their warm welcome of us to this year’s Biennale. I’ve especially enjoyed discussing The Other Side of the Wind with Peter, whose The Cinema of Orson Welles  [9]shaped my view of the director’s career way back in 1965.

My quotation from Gary Graver comes from Joe McBride’s What Ever Happened to Orson Welles?, p. 225.

Feel free to visit our Instagram page [12] for an ever-expanding set of snapshots of the Venice festival.

P.S. 5 September 2018: Standard accounts suggest that Welles completed editing only two sequences. Alert reader Evan Davis points out that editor Bob Murawski [13] says that Welles edited about 30% of the finished film. Thanks to Evan for this.

I apologize for the typos and whiffs in this entry; we’ve had unreliable access to the Net lately, and not all revisions took.

P.S. 8 September 2018: Ardent Wellesian Jim Naremore has created his own website [14], and it’s must reading for every cinephile. Right off the bat he gives us a thoughtful piece, “Orson Welles, Citizen of the World,”  [15]available in English only online. Watch for Jim’s essay on The Other Side of the Wind, slated to be published in Cineaste [16]. 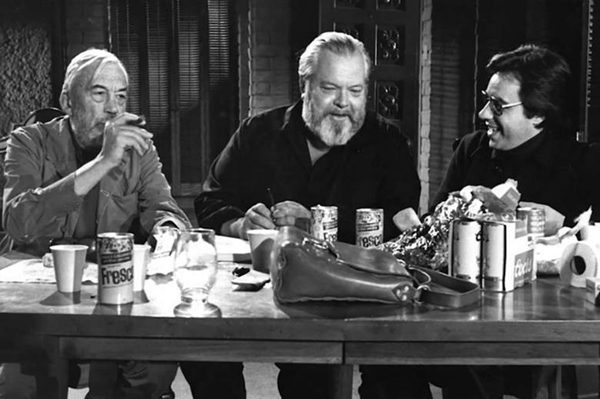 John Huston, Orson Welles, and Peter Bogdanovich on the set of The Other Side of the Wind.