Kristin and I are back at the Venice International Film Festival [1], because once more I’m on the panel for the festival’s Biennale College Cinema [2] projects. A future post will take up those films, as well as Kristin’s comments on the restored Der Golem (1920), which screened the night before the festival’s official opening. For now, a quick report while we’re between screenings. And feel free to check in with our new Instagram page [3] for rolling photo updates as the days go by.

Kristin and I are admirers of Damien Chazelle’s work, so you’d expect that we were keen to see First Man, his Neil Armstrong film. It’s not exactly a biopic, as it concentrates on a fairly brief period of his life. It treats his career as an astronaut as partly a mechanism for coping with the death of his young daughter. The familiar Hollywood double plot–personal life versus professional life–is filled out by ongoing tensions with Armstrong’s wife Janet (Claire Foy) and by NASA’s efforts to beat the Russians to the moon.

The domestic scenes are steeped in mild melancholy, as the workaholic, buttoned-up Armstrong seems a good candidate for clinical depression. One powerful moment involves Janet’s insistence that he open up to his sons and admit that he might not return from the moon launch. His deep affection for his daughter, sketched quickly in the opening portions, suggests why he’s more stiff and distant with his sons later; it’s as if he doesn’t want to risk strong love again. Ryan Gosling’s performance handles this well, I think; after we’ve seen him caress his daughter’s hair early on, we watch his fingers closely. Even in long shots, his hands betray him, as when he nervously twists his wedding ring. (Below, Foy, Gosling, and Chazelle at the press conference.)

The moon mission becomes a kind of catharsis that lets Armstrong regain a dimension of his humanity. The professional plot, crystallized around a series of subgoals leading to the moon shot, renders him as tenacious and dedicated. Pointedly contrasted to showboating Buzz Aldrin, Armstrong’s laconic manner reflects not only a confidence in his abilities but a quiet, stubborn professionalism. This too is shaken by death; the incineration of his friends in a test not only stresses the danger of space flight but the fact that he is increasingly alone. Throughout his adversities, Armstrong must show both physical endurance and resourceful intelligence. He’s admirably swottish, but he uses it as a shield for emotions.

From its very opening frames First Man has a galvanizing immediacy. Chazelle has given up the smooth, locked-down camera technique of La La Land in favor of a looser handheld approach that recalls Guy and Madeline on a Park Bench. The film’s over 2000 shots create an impressionistic nervousness that suits not only the suspense of the NASA mission but the anxieties of the protagonist. DP Linus Sandgren filmed many of the tighter shots in Super-16mm, and the same gauge, applied to flashback images of Armstrong’s daughter, yield almost Kodachrome bursts of color. By contrast, the culminating scenes on the lunar surface, shot in Imax, contrast with the rest of the film’s texture by being rigorously stable, awe-inspiring framings.

In filming Armstrong’s tests and missions, Chazelle tackles what we might call the Raging Bull problem. Scorsese sought to distinguish each of Jake LaMotta’s prizefights through different techniques (slow-motion, optical POV, and the like). Chazelle does much the same. The film’s harrowing opening sequence is rendered in convulsive imagery from Armstrong’s point of view, trapping us in the cockpit with him as he manages to salvage a test flight. Later aerial sequences take us briefly outside spacecraft in varying angles, but I think the most majestic external views are saved for the climactic moon shot.

Paralleling this pattern, in the most claustrophobic passages thrashing grinding sounds rip through the theatre. By contrast, the moon landing is accompanied by Justin Hurwitz’s quietly triumphant waltz. This is definitely a film to be seen and heard on the biggest screen you can find.

As one measure of Chazelle’s interest in fine-grain detail, consider his powerful use of reflections. The astronauts’ helmets become both distorting windows and reflecting masks that capture the world outside. There’s striking imagery in the opening sequence of the horizon’s curvature bouncing off Armstrong’s helmet, while when we get to the moon, the landscape becomes a wraparound image blotting out the First Man’s face. At one point earlier in the film, I swear I saw the reflection of the moon in the iris of Armstrong’s eye. In any case, the final shot (no spoilers here) takes this pictorial motif to a new emotional pitch.

I want to write more about First Man, after I’ve seen it again and thought about it more; I hope as well to bring you information from Linus Sandgren about the cinematography. Still, I hope these notes convey my immediate appreciation for what Chazelle and his team have accomplished. First Man seems to me another exciting achievement by one of the most ambitious directors working today.

Revisit us for more blogging, We’ll be writing about Cuarón’s Roma, which we saw this morning, and The Other Side of the Wind, which we’re seeing in a few hours. I make these promises as partly a way to ensure that we actually do it!

Thanks to Paolo Baratta, Alberto Barbera, Peter Cowie, Michela Lazzarin, and all their colleagues for their warm welcome of us to this year’s Biennale. 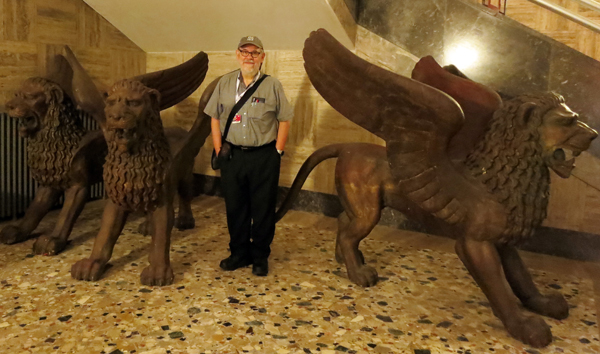 Grrr! DB in the wingéd lions’ den: They have several of these beasts on hand. This and press conference photo by Kristin.