The Vancouver International Film Festival [2] ended yesterday, but the films and the pleasures they yielded linger on. Our first two entries are by Kristin, the last two by David. 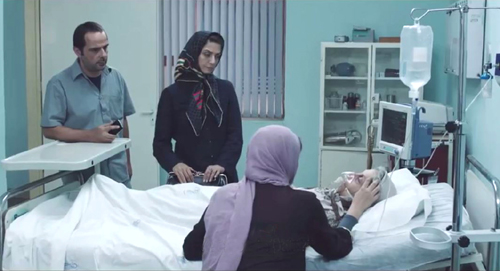 Iranian film and television director Behnam Behzadi is not well-known outside his native country. Inversion, which was shown in the Un Certain Regard section of Cannes this year, suggests that he deserves to have more international exposure for his work.

The title refers to the meteorological phenomenon that can cause dense pollution to form at ground level. The film opens with shots of Tehran streets seen dimly through a thick haze. The pollution has a causal role to play, since the heroine’s elderly mother ends up in a hospital as a result of breathing problems. More metaphorically, however, the title refers to a sudden reversal in Niloofar’s situation.

Initially she seems to be in a relatively strong position for a Iranian woman. Still unmarried in her 30s, she runs a small, prosperous garments factory and begins to date an amiable man whom she clearly likes. Her mother’s sudden health crisis, however, leads a doctor to insist that she be moved to the healthier northern part of the country, where Niloofar’s sister and brother-in-law happen to own a small villa. Niloofar, with no spouse or children, is pushed by the couple and her brother into agreeing to go along and take care of her mother. She hopes to keep the factory going, but the brother selfishly rents out the premises to pay off his own debts. Niloofar resists going with her mother, but as her siblings ignore her wishes and she discovers that the man she may be considering marrying has kept an unpleasant secret from her, she realizes how little power she has over her own life.

As in Farhadi’s films, a seemingly ordinary situation suddenly deteriorates from a simple cause. But Farhadi tends to gain complexity by avoiding making his characters into villains. In his films, as in Renoir’s, “everyone has his reasons.” In Inversion, however,  the brother is straightforwardly in the wrong, refusing to consider Niloofar’s desires and even threatening her with violence during one argument. Overall the film is entertaining, with Niloofar an engaging figure who gives an insight into the situation of women in contemporary Iran. 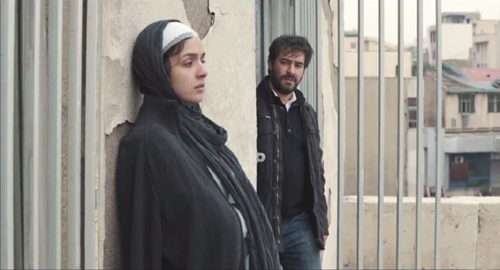 Asghar Farhadi is best known for A Separation (2011), the first Iranian film to win an Oscar for best foreign-language film. His earlier masterpieces, About Elly (2009) and my own favorite, Fireworks Wednesday (2006), are slowly coming to be known in the West, largely via home video. After the slightly disappointing The Past (2013), Farhadi is back on track with The Salesman.

The film opens with a tense, dramatic scene in which a Tehran apartment building threatens to collapse and its inhabitants frantically struggle to evacuate. The result is that the central characters, Emad and his wife Rana, must quickly find a temporary apartment (see bottom) while they also prepare to star in a production of Arthur Miller’s Death of a Salesman.

They seem to be coping until Rana mistakenly opens the door of their new apartment, assuming that her husband has come home. The shot holds on the door, standing ajar, as Rana moves off to take a shower and the scene ends. Later we learn that an unknown assailant has entered the apartment. Whether he raped Rana or simply startled her so that she fell and cut herself on broken glass is never revealed, but she is traumatized and unable to proceed, either with her everyday life or her role as Linda Loman in the play. Emad tries to be supportive, but he becomes obsessed with tracking down the intruder.

The mystery gradually unravels as the shady background of the apartment’s former tenant emerges, and revelation of the identity of the intruder undermines the question of revenge. As in Farhadi’s other films, characters’ mistakes, honest or otherwise, compound each other. Ultimately, absolute blame is hard to assign.

The Salesman won two prizes at Cannes: best screenplay for Farhadi and best actor for Shahab Hosseini as Emad. Amazon Studios and Cohen Media will release it in the US on 9 December.

The King is (nearly) dead

Early on in Roberto Rossellini’s Taking of Power by Louis XIV (1966), we find Cardinal Mazarin on his deathbed. Mazarin’s doctors decide to bleed him; a priest advises him on the disposal of his wealth; finance minister Colbert briefs him on intrigues at the king’s court. The shots are lengthy, following the men around the chamber.

This remarkably deliberate sequence was considered quite striking at the time. In a story centered on Louis XIV, Rossellini devotes thirteen minutes to Mazarin. His impending death creates exposition about the ensuing power struggles and initiates a somber pace rather different from that of the standard historical film. The scene also reminds us that historical events have a tangibly material side, as when doctors confer gravely over the stools in His Eminence’s chamber pot. 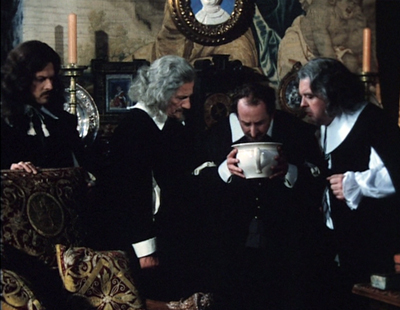 Rossellini, who’s interested in the tactics by which Louis tames the nobility, doesn’t show us the King’s final hours. That morbid task is taken up by Albert Serra’s The Death of Louis XIV. Unlike Rossellini’s film, which is filmed in radiant high-key and shows sumptuous detail of fabrics and flooring, Serra’s treatment relies on chiaroscuro, with shadow areas broken by trembling candlelight. And while Rossellini’s PanCinor lens swivels and zooms around these apartments, Serra cuts among close views of faces, hands, and a steadily blackening gangrenous royal foot.

In the process Serra expands the physicality of the Mazarin sequence to the length of an entire film. Louis seems to linger for days, but we’re given no distinct sense of how much time passes; in only two shots do we glimpse the outdoors, in bleary light that might be dawn, drab afternoon, or dusk. The time is filled out by court rituals, such as the King’s doffing his hat to his entourage, and by the steady decline of his powers. He can’t swallow food and can barely take water or wine. Through it all, Louis feebly issues his final orders about matters of state and the disposition of his body. A long scene of the last rites is punctuated by a barely discernible fart. This is a movie centrally about a degenerating body.

Even more than Rossellini did, Serra probes the shaky state of medical science of the time. (Louis died in 1715, just as the Enlightenment was beginning.) When Louis’s leg contracts gangrene, the learned doctors debate whether to amputate it. A quack shows up with an elixir made of bull sperm and other recherché ingredients. At the end, the principal physician takes the blame for the king’s death and makes a remarkable apology directly to the camera. Before that, though, Serra has given us a three-minute shot of His Highness reproachfully staring at us (up top) while we hear a Kyrie Eleison somewhere offscreen. Another echo of film history: Louis is played by Jean-Pierre Léaud, who looked out apprehensively at us many years ago, in the seashore ending of The 400 Blows. It’s glib to say that cinema films death at work, but here the cliché gains some meaning.

Master of the weepie 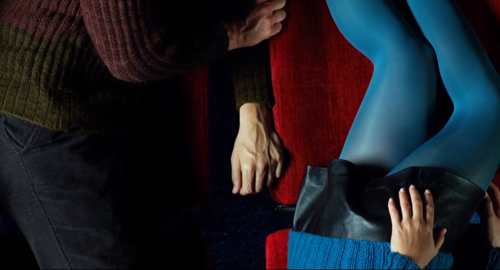 Is any filmmaker more unfairly taken for granted than Pedro Almodóvar? For over thirty years, he has created sparkling, handsome entertainments that combine cinematic intelligence with outrageous eroticism and insidious emotional punch. His films revel in plot complications and edgy humor. Along the way he effortlessly deploys the techniques [8] that make modern cinema modern, from flashbacks and voice-overs to subjective sequences and abrupt replays that fill in gaps.

He makes it all look easy, and gorgeous. After the drab grays and browns of Hollywood fare, what a pleasure to see a film packed with saturated primaries and bold designs. He proves that you can go as dark as you like in plotting and still make things look delightful. 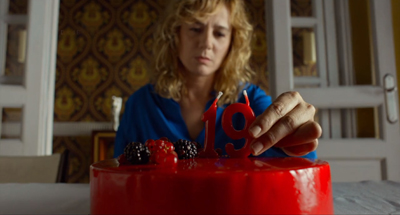 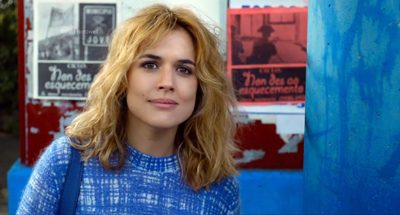 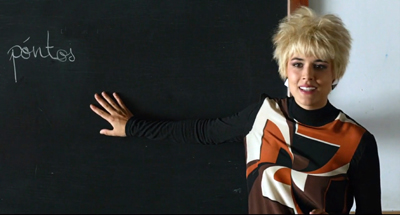 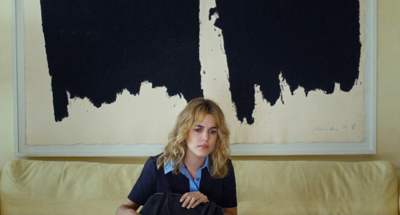 His characters are clothes horses, I grant you, but not the least of his debts to Old Hollywood is the belief that we want to see presentable people in pretty costumes and settings. The world is ugly enough, he seems to say; why add to it? Seeing The Girl on the Train reminded me how glum American movies are determined to look. An Almodóvar apple looks good enough to eat, and a housekeeper’s roseate apron seems the height of chic. In this world, even refrigerator magnets evoke a Calder mobile. 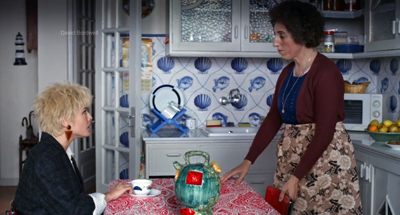 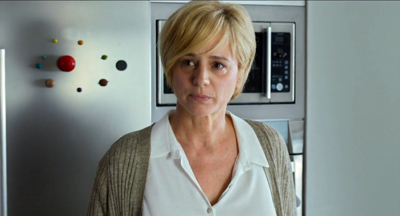 These elegantly voluptuous tales make unabashed appeal to Hollywood genres: the screwball comedy (Women on the Verge of a Nervous Breakdown, I’m So Excited), the illicit romance (Law of Desire, The Flower of My Secret), the twisty thriller (Live Flesh, The Skin I Live In), even the ghost story (Volver), and above all the melodrama—medical (Talk to Her) and maternal (High Heels, All about My Mother). He rolls Lubitsch, Sirk, and Siodmak into a nifty package, tied up with a ribbon bow of pansexuality. 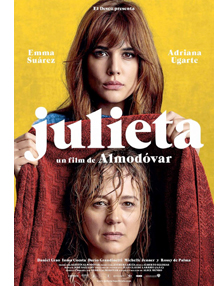 [15]Julieta (from which all my images come) revisits the maternal melodrama, specifically the mother-daughter nexus. Our heroine, beginning as a spiky-haired classics teacher, seems to have an idyllic life married to a fisherman, but soon infidelity, misunderstandings, and a tempestuous storm shatter it. All the paraphernalia of melodrama—raging seas, unhappy coincidences, ingratitude, and dark secrets—threaten Julieta’s efforts to save her marriage and protect her daughter. Told in flashbacks, chiefly through a letter she writes her daughter Antia, the two major phases of Julieta’s life get intercut in surprising and gratifying ways. With his usual cleverness, Almódovar has Julieta played by two female performers, with a surprise match-on-action linking them in one scene. A  beautiful purple towel helps, as the poster sneakily suggests.

It’s all about guilt, passed from husband to wife and mistress and then to daughter and even daughter’s pal, with the obligatory recriminations and tearful confessions. The plot is continually surprising, yet every scene snicks into place. Neat parallels among couples develop quietly, and tiny hints planted in the beginning pay off. As usual with Almodóvar, the opening credits guarantee that you’re in assured hands. They also tease us with motifs. Here the film’s dual structure (two phases of life, two actresses) is suggested through lemon-yellow letters sliding into alignment. 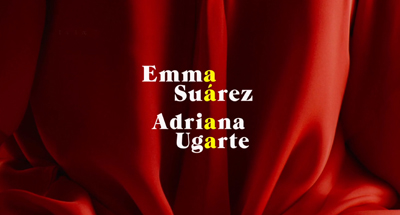 The two women on my left started crying halfway through the movie. I tell you, this director is a credit to the species.

Special thanks to Michael Barker and Greg Compton of Sony Pictures Classics. Sony will release Julieta in the US on 21 December. 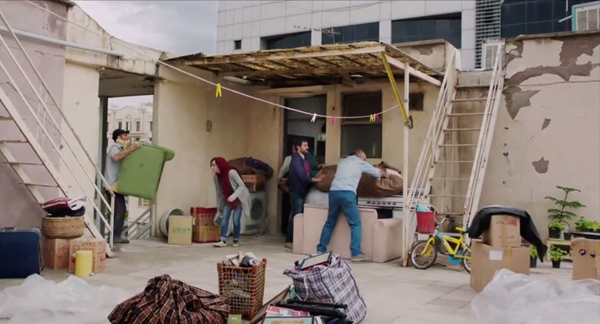