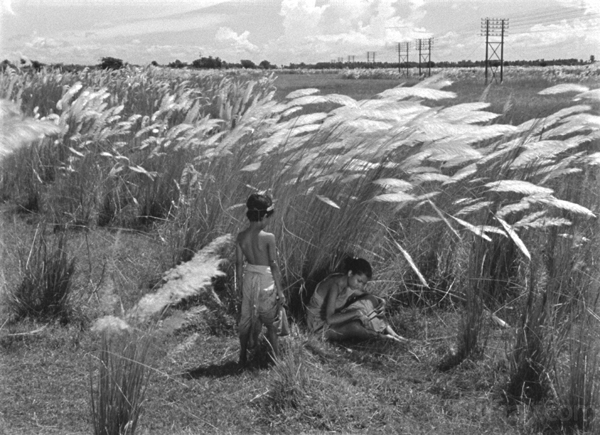 The second half of my week at the Cinema Ritrovato festival [2]in Bologna was centered around two Asian events: a small program of Iranian films from the 1960s and 1970s and the restored Apu trilogy. In between those screenings I tried to fit in some programs of pre-1920s cinema.

Bringing the Apu Trilogy back from the ashes

That was the title of a panel presentation during the festival, one which I missed because I was watching the first of the four Iranian films. In this case the metaphor is literal. The original negatives of the Apu films were stored in a London warehouse, and in 1993 a fire damaged them extensively.

In 2013, The Criterion Collection and the Academy of Motion Picture Arts and Sciences began a collaborative restoration. Working meticulously by hand and employing an innovative rehydration technique, experts at L’Immagine Ritrovata in Bologna rescued the images for about 40 percent of Pather Panchali and 60 percent of Aparajito. The negative of Apu Sansar (The World of Apu) was wholly lost. For it and the missing parts of the other two films, footage from fine-grained masters and duplicate negatives from various archives was used. The restoration was done in 4K. (For an interview with Lee Kline, Criterion’s technical director, see here [3]. There is a short but informative short film on the restoration [4], including some before-and-after comparisons, on Vimeo.)

The result is spectacular, far better than one would expect, given the dire circumstances the restorers faced. It was a privilege to see the entire trilogy over three days on the huge screen of the Cinema Arlecchino from the front row. There were times when the replacement footage was obvious, but for the most part, the images look pristine. They also look like film, with no hint of video-y quality about them.

I had seen the trilogy only once, in 16mm back in my graduate-school days. At the time, I admired it but wasn’t bowled over. Sitting through the Ritrovato screenings, I found it a profoundly moving and beautiful experience. Satyajit Ray manages both to maintain a quiet, leisurely pace and to compress the hero’s life, from birth to early adulthood, into three parts totalling less than six hours.

Apu’s strict but devoted mother (below left, in Aparajito) anchors the first two films, gaining our sympathy despite her scolding and worrying. Apu’s wife, Apurna (below right, in Apu Sansar), is in the third film for a remarkably short time. Yet we quickly come to understand her love for this unknown man whom she marries almost by accident, her sense of humor, and her compassion, all of which are vital to our sympathy for Apu’s utter devastation after her death. Indeed, the trilogy involves five major deaths, all of which makes the hopeful ending the more affecting. 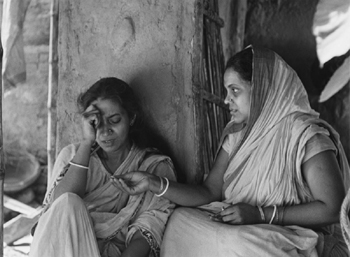 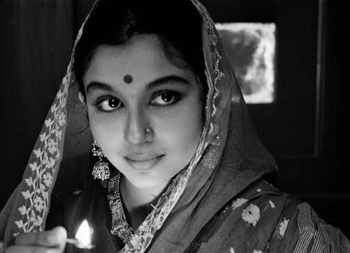 Presumably The Criterion Collection will bring out a Blu-ray set of the three films, though no date has yet been announced. 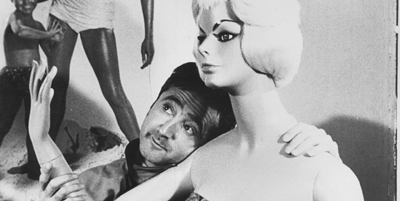 Admirers of Abbas Kiarostami, Mohsen Makhmalbaf, Asghar Farhadi, Jafar Panahi, and other notable directors of the Iranian cinema of the past few decades might be curious about their forerunners. Iranian film critic and historian Ehsan Khoshbakht has begun to satisfy that curiosity by programing a short series of classics of pre-Revolutionary cinema. According to his program notes (available in their entirety online [8]), the four films shown in Bologna constitute about a quarter of the output of the Iranian New Wave. I hope there will be further screenings at future festivals.

As Khoshbakht warned in introducing the earliest film in the series, Shab-e Ghuzi (Night of the Hunchback, 1965), it is not a masterpiece and certainly not a forerunner of the filmmaking that would later bring Iran to prominence in international festivals and art cinema. Director Farrokh Ghaffari was a pioneer of Iranian filmmaking beginning in the 1950s, but he is perhaps equally important in having started the first Iranian film archive.

Night of the Hunchback is a black comedy with a story loosely derived from The Trouble with Harry. A player in a cheap entertainment troupe is accidentally killed, and the bulk of the film follows his corpse as it is passed from one group of characters to another; these include a pair of smugglers running a beauty salon, who provide much of the film’s humor (above). Most try to dispose of it, but a society woman trails it in the hope of retrieving an incriminating document in its jacket pocket. By Western standards it seems like a fairly mainstream commercial work, but it departed from commercial Iranian cinema, according to Khoshbakht, “with its respect for folklore and its bitter portrayal of the upper class.” It was a commercial flop but gained some attention at European film festivals.

The most famous film of the era is Gaav (The Cow, dir. Dariush Mehrjui, 1969). It centers around Hassan, the owner of his village’s sole cow. He dotes on the beast, as is quickly established in an early scene when he affectionately bathes her. 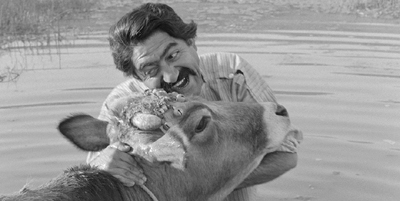 When the cow mysteriously dies (a cause is hinted at but never confirmed), the villages lament the loss of their only source of milk, but they also worry about how Hassan will react when he hears the news.

Although Hassan is the evident protagonist of the film, the drama centers more around the ignorance, lack of judgment, and even cruelty of the villagers. The film begins not by introducing Hassan and his cow but with a disturbing scene of the local children chasing and tormenting a mentally defective young man. This establishes the tone for several later scenes.

When the cow’s death is discovered, the small group of men who wield authority initially concoct a story of the cow having run away, and the villagers bury the carcass (bottom). As Hassan descends slowly into madness, the people supposedly trying to help him make every possible wrong decision, leading to disaster.

If the films I discussed in my previous entry extolled the virtues of village life and represented leaving home as unwise, The Cow is just the opposite. Cut off from the outer world, the villagers have little education or ability to come up with logical solutions to problems. It’s a theme repeated in the other two Iranian fiction films on the program as well.

Yek Ettefagh-e sadeh (A Simple Event, dir. Shrab Sahid Saless, 1973), the latest of the films shown, seems the most obvious forerunner of the wave of Iranian cinema that started in the 1980s. It closely follows the daily routine of a young, unnamed boy living in a small town on the edge of the Caspian Sea. We see him at school, helping sell the few fish that his father catches each day, eating and trying to study in the almost unfurnished house he shares with his father and sickly mother.

There’s little dialogue, apart from scenes in the school. I believe the boy speaks two lines in the entire film, and his father communicates with him only occasionally, to order him around: “Close the door” or “Study.” Much of the action consists of the boy running through the streets on errands, including his night-time visit to fetch a doctor for his ailing mother (below). 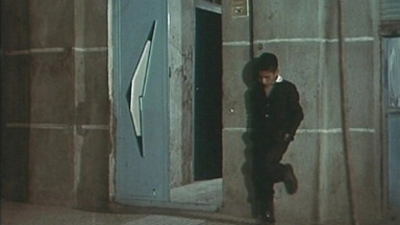 Although there’s a superficial resemblance between A Simple Event and the later films of the “child quest” genre, I see considerable differences as well. In films like Kiarostami’s Where Is My Friend’s Home? or Panahi’s The Mirror, the child protagonists have clear-cut goals which they have decided upon themselves. They are stubborn and determined, and as they doggedly pursue their goals we are never unsure about their motives.

In A Simple Event the boy has no goal, and we learn almost nothing about his character. Is he really as stupid as his teacher believes, or is he behind his classmates because he gets little chance to do his homework? Does he love his mother or is he indifferent to her declining health? Is he resentful but cowed by his elders? Or is he resigned and accepting of his lot? We have no way of knowing. His one independent action is to buy a bottle of Coca-Cola to go with his usual meager meal after his father uncharacteristically gives him a little money.

There’s certainly a suggestion, once again, that small-town life is deadening to people. The rote learning and lack of relevance in the subjects taught in school help explain the lack of imagination and the resignation to their situation among the students.

My suspicion is that later directors may have seen the potential in A Simple Event and built upon it, introducing a greater empathy with their child protagonists and certain greater drama and suspense.

To me, the surprise among the Iranian films was Oon Shab Ke Baroon Oomad Ya Hemase-Ye Roosta Zade-ye Gorgani (The Night It Rained or the Epic of the Gorgan Village Boy, dir. Kamran Shirdel, 1967). It’s a 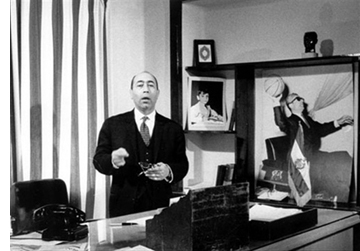 [11]sophisticated investigative documentary that reminded me of the work of Erroll Morris.

The film begins with a written report on the making of the film itself, submitted to the authorities by Shirdel. It seems to describe earnest attempts to document an inspiring story that had been widely circulated in newspapers. On a rainy night, a boy in the village of Gorgon had discovered that flooding had undermined the local train tracks; he signaled an oncoming train by setting his jacket alight, successfully stopping it and saving 200 passengers’ lives.

Doubt begins to creep in, though. Among the many newspaper titles shown trumpeting the boy’s feat, we find one calling it a pack of lies. Shirdel’s report indicates that his team could not find the boy and set out to interview various people. Gradually it becomes apparent that the whole story was concocted and that the train–a cargo train with no passengers aboard–was stopped by local railway officials. Throughout the film, there are further passages from the production report, describing the filming work as if it were for a simple, laudatory documentary about the heroic boy. We see, however, that much of the filming undermines that heroism and satirizes the government’s willingness to perpetuate false accounts of it.

Shirdel carefully avoids making that point explicitly. He intercuts interview scenes, some of the boy rattling off his story and some of newspaper editors defending the story (above). In other scenes, we hear from indignant railway officials and an editor who dismisses the incident as pure fiction. The director seems to let us decide on the truth, but the the absurdity of boy’s supposed heroism becomes increasingly apparent.

Not surprisingly, Shirdel’s film was banned. Six years later, according to the program notes, “it was deemed harmless. It was then premiered at the Tehran International Film Festival where it won the Best Short Film award.” Clearly the officials who cleared it for release missed the ironic underpinnings of the film.

The Night It Rained (and perhaps others of Shirdel’s films) may have offered a model of reflexive filmmaking that later directors picked up on. Close-up, The Mirror, Salaam Cinema, and Through the Olive Trees all bring filmmaking into the stories they tell.

Thanks to Ramin S. Khanjani for some corrections concerning the Iranian section of this entry. His article on The Night of the Hunchback, “Actors and Conspiracies,” was published in Film International 15, 3/4 (Autumn 2009/Winter 2010): 66-71. 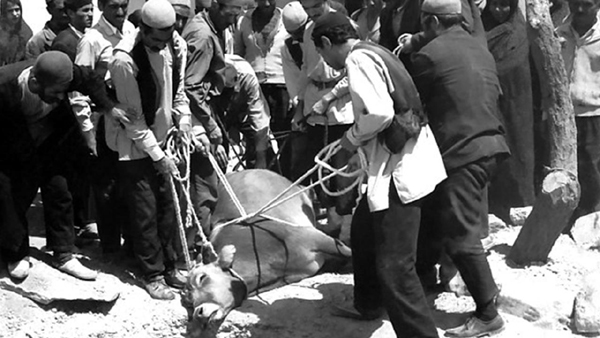