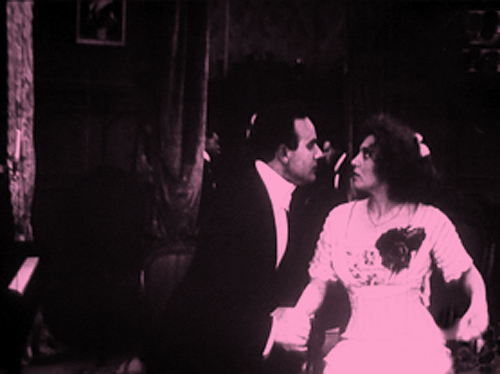 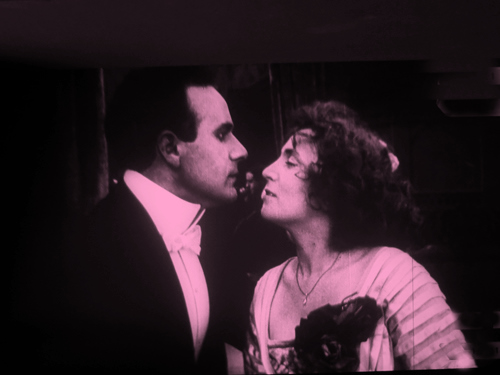 Last summer during a trip to the Royal Film Archive of Belgium I came across a single camera setup [3] that bloomed like a flower in an almost casual way. This entry is in the same spirit, but there’s nothing casual about this cut. I spotted it during my current visit to the Danish Film Archive in Copenhagen.

Nina Gram is engaged to Sven Berg, best friend of Nina’s brother Olaf. But Andrew Larsson, a Mormon, fascinates Nina with his courtliness and his gripping sermons. One night, during a visit to her family’s home, Larsson gets Nina alone while Sven, Olaf, and others are playing cards in another room. She’s starting to succumb to Larsson’s charm offensive (though we think he has offensive charm).

As The Mormon’s Victim (Mormonens Offer, 1911; Nordisk Films, directed by August Blom) develops, Larsson will induce Nina to flee to Utah with him, where he’ll keep her prisoner. Sven and Olaf will track them down by train, ship, and auto, the entire flight and pursuit joined through crosscutting reminiscent of Griffith. The Mormon’s Victim has several memorable shots, including some striking ones taken from a car. But in particular there’s this cut. The two shots surmount today’s entry. 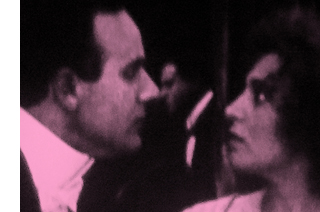 A full shot shows Larsson and Nina in the parlor. Earlier in the scene Sven has left the card game in the distant room to check on what his fiancée is up to. He comes forward hesitantly; this is partly to express his vague worries about Larsson, but it’s also Blom’s way of making sure we know it’s Sven in the rear of the tableau. When Sven returns to the game, he settles in directly behind Nina and Larsson, so that he becomes the most visible figure at the card game.

When Larsson entices Nina away from the piano, they place themselves on the settee in the foreground. And in my first image up top, we can see solid, oblivious Sven right behind them. A blow-up of that area of the shot is on the right.

Then Blom cuts directly in. The axial cut was the most frequent sort of editing found within scenes at this period, and Blom’s cut is more or less along the camera axis, though displaced a bit to the right. The result is a medium two-shot of Larsson staring almost hypnotically at Nina and her responding with rising passion. 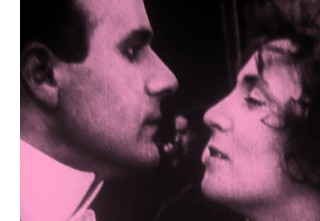 [5]You see where I’m going with this. There’s actually a third person in the shot. Sven is  still sitting behind them, but now even more tightly sandwiched between the faces–a tiny figure but fully discernible in the 35mm print. On the right I enlarge that portion of the image for you. Dead center, Sven’s tiny head floats between their profiles like a bubble from Nina’s lips or a rose between her teeth.

This is a remarkable shot. Since Nina eventually turns away and refuses Larsson’s kiss, we’re tempted to say that the shot creates a visual metaphor, suggesting that Sven “comes between” them. Fair enough, especially since the Danes have the same figure of speech (at komme i mellem). But I’d also want to signal how this possibility of thinly-sliced depth fits smoothly into the tableau style I’ve discussed many times on this blog and in my recently posted video lecture. It relies on hyper-precise staging in depth, accentuated by the axial cut (always a cut that accentuates depth).

It’s all the more remarkable because in those days, the camera viewfinder was mounted alongside the lens. We’re so used to reflex viewing–that is, seeing exactly what the lens of our camera or phone is framing–that we tend to forget that until the 1960s, in most cases a cinematographer had to compose the shot allowing for the parallax difference between the viewfinder and the lens. True, in most tableau shots the camera is far enough back to give some leeway for background planes, and some cameras could swivel (“toe in”) the viewfinder inward as the framing got closer. But this scene remains an extraordinary piece of filmmaking. The cinematographer Axel Graatkjaer [6], only twenty-six when he shot this film, deserves credit for pulling off a rare stunt.

The Mormon’s Victim is yet another example of the great variety and boldness of the cinema of the 1910s. Had I known it, I would probably have squeezed it into my video lecture, “How Motion Pictures Became the Movies.” [7] Maybe I can work it into the followups I plan to post later this year. In the meantime, take this as another instance of why we should thank film archives for preserving fairly obscure films that have a lot to teach us about what talented creators have done with our favorite medium.

Ron Mottram surveys the local films of this period in his indispensable The Danish Cinema before Dreyer [3]. For more on the tableau style, see the lecture I just mentioned, along with the blog entries in the category [8]. I have more on Danish films and the tableau tradition here [9], and I discuss that tradition as a background to Dreyer in an essay [10] on the Danish Film Institute’s Dreyer site.

Thanks to Thomas Christensen and Mikael Braae of the archive for all their help. I have devoted other entries to their archive and Danish film culture, but this [11] might be the most relevant today. 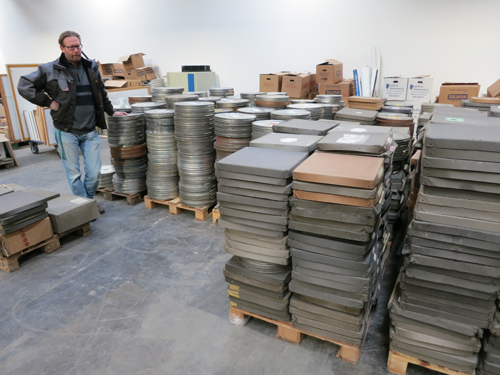 Mikael Braae surveys a recently received collection of over 400 35mm film prints. He’s in the process of sorting and examining them. There are still big 35mm collections out there!