My title exaggerates. There are other venues for the Vancouver International Film Festival [2] besides the Empire Granville [3] multiplex. There is the Pacific Cinematheque [4], often used for more avant-garde items; the Vancity Theatre [5], which screens art films and hosts industry events year-round; and the gorgeous [6] old picture palace, the Vogue, [7] a multiple-use venue that hosts both big screenings and gala events. But frequently we find ourselves wandering for a whole day among the Granville’s seven screens, circling the globe cinematically.

Four years ago we blogged about Captain Abu Raed [8] (2007), the first Jordanian feature film in decades. This year there is The Last Friday (2011, 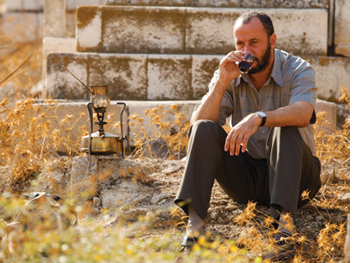 [9]Yahya Alabdallah), and by now the fact of a Jordanian film appearing at festivals is no longer notable. Production has now been systematized. The Last Friday was financed (for around $100,000) by the Royal Film Commission of Jordan’s Educational Feature Film Program.

The basic plotline is simple, with protagonist Youssef, a handsome, hard-working middle-aged man, divorced and reduced to driving a taxi prone to breakdowns, struggling to earn money for a serious operation. The cinematography was done using a Red One camera, and the resulting images are impressive. (Alabdallah often resorts, with good effect, to what David has termed planimetric compositions [10], those shot directly toward a flat background.) There is little dialogue, and Youssef’s struggles are conveyed by small details, visual and aural. The fact that he has tampered with his apartment block’s switch boxes to steal electricity is established early on, but by-play with the fuses he has transferred or hidden becomes an unnecessary but entertaining motif.

Perhaps the “educational” part of the film comes from Youssef’s son, a teenage wastrel who hangs out at his father’s apartment. It eventually comes out that he has stopped going to school, and Youssef has the additional burden of confronting his ex-wife to thrash out a method for dealing with their errant son.

The Last Friday treads that risky line so many independent filmmakers on small budgets take, singling out a character with a problem and showing him or her doggedly dealing with it. It takes a sure touch and an interesting character to make this work, and Alabdallah manages both, helped by Ali Suliman’s performance in the lead role.

So far undoubtedly the biggest unexpected gem this year has been the Iranian family melodrama/thriller A Respectable Family (2012). The film is the first fiction feature by documentarist Massoud Bakhshi; it was shown in the Directors’ Fortnight series at Cannes and gained generally favorable reviews.

The plot concerns Arash, a professor who has lived in Paris for decades and, as a guest post at the university in his hometown of Shiraz winds down, seeks in vain for the return of his passport to allow him to return home. At the same time, a lawyer informs him and his mother that a sizable sum of money has been left to them by his estranged, abusive father. The family drama that plays out depends for effect on an extraordinarily complex and tight script with numerous abrupt turns and surprises that keep the audience as busy as in any recent Hollywood thriller. In particular, Bakhshi’s use of switches in point of view and flashbacks to the period of Arash’s youth are masterful.

Here I pass along the same advice I have given friends here at the festival in recommending the film: don’t read reviews or program notes about this film before seeing it. Everything I have read about the film gives away key pieces of information that should be kept secret. 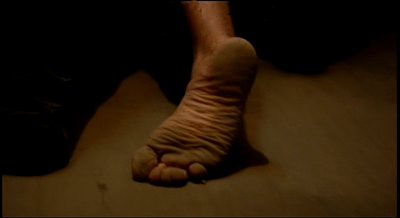 The tone of the film, with its implicit but obvious criticism of the Iran-Iraq war and the regime that fostered it, plus the ending’s evident support for student demonstrators, make it amazing that the film could be made within Iran. It apparently has not been released within its home country and most likely won’t be. Yet the Iranian press reported calmly on its favorable reception at Cannes, as the press there usually does when national films gain prestige abroad. A story [12] in the Teheran Times remarked: “It was a great surprise that non-Iranian filmgoers were able to relate to the Sacred Defense (1980-1988 Iran-Iraq war) and the concept of martyrdom, which are themes of the film, Mohammad Afarideh [the film’s producer] told the Persian service of the Mehr New Agency.” Afarideh added, “The film has an Iranian storyline, but the structure Bakhshi has chosen for the dialogue helps attract foreign audiences as well.”

Many in Iran and elsewhere were also surprised that A Separation could connect with western audiences in the way it did. It’s a pity that A Respectable Family is unlikely to gain such a widespread audience, but it is worth seeking out. It plays once more here in Vancouver, on October 3 at 6:45 pm in the Empire Granville 2.

Una noche  (2012) is listed in the program as a Cuban/UK/USA co-production. The Cuban contribution comes primarily from the setting and the cast–and the cooperation of the government. (Certainly it makes setting out to try and escape to the USA an unattractive prospect.) It was entirely shot in Havana and environs, and three young first-time actors play the principal roles. The director is Lucy Mulloy, making her feature debut. It is otherwise largely New York based, having been at least partially supported by the Independent Filmmaker project in its “Narrative Independent Filmmaker Lab,” which funds films with budgets of under a million dollars. Post-production seems mainly to have been done at the Tisch School of the Arts at NYU.

Perhaps as a result of such mixed origins, Una noche manages to create a strong, Hollywood-style plot with plenty of local color. The opening shows a blonde tourist in a car, but the heroine’s voice declares that this will not be this girl’s story but her own. Quick but effective characterization sets up the close relationship between twin brother and sister. They’re poor kids from the barrio scratching a living, with Lila working as a dance-hall girl and Elio serving as a cook. Yet we are away from Lila for long stretches, becoming aware, as she is not, that Elio is gay and has a crush a fellow cook. But Raul is an obviously straight young thug, and he has talked Elio into making an attempt to cross to the USA on a raft.

Their preparations, gathering the materials and supplies they need, take us through the poverty-stricken neighborhoods, with Elio’s shiftless friends catcalling at girls and joyriding on their bikes by clinging to buses. Raul visits a dealer to buy medicine for his AIDS-stricken mother, a gaunt former beauty still turning tricks to support herself. 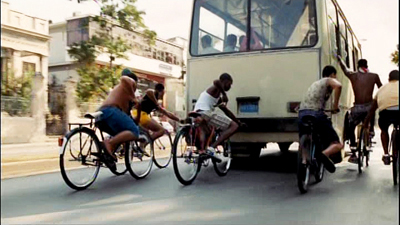 The action escalates as Raul accidentally injures a tourist and Lila discovers that Elio is planning to leave her and go with Raul. Mulloy deliberately downplays the ending, flashing a dedication on the screen to give us the impression that the film is over. Almost as an afterthought mixed in with the beginning of the credits, she presents brief shots showing us of the fates of the characters, filmed from a distance and without Lila’s voiceover. The Variety reviewer [14] found the ending abrupt and “somewhat inadequately foreshadowed,” yet it seemed appropriate to me, and indeed was one of the most original touches in the film.

The North American rights to Una Noche were picked up earlier this year by Sundance Selects after the film proved a hit at the Tribeca Film Festival, winning Best New Narrative Director, Best Cinematography, and Best Actors (shared between its two male leads). Ironically, two of the young lead actors used the Tribeca festival as an occasion to request asylum in the USA.

There is something comforting about the fact that, after all the success of the Lord of the Rings trilogy and the prospect of a series of Avatar films 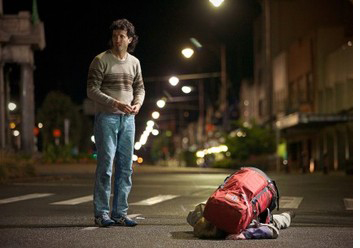 [15]being made there into the indefinite future, the New Zealand Film Commission is still funding the same sorts of low-budget genre movies that were made before the country became Middle-earth and Pandora. Robert Sarkies, veteran Kiwi director, has followed up his gripping, headline-based thriller Out of the Blue (20o6) with a return to Scarfies (1999) territory, albeit on a more grotesque level.

Two Little Boys (2012) is based on the old getting-rid-of-an-incriminating-corpse premise, with wimpy Nige (Bret Mackenzie, left) accidentally killing a Scandinavian sports star with his car. Despite a recent quarrel, Deano (Hamish Blake), his best friend from childhood, agrees to help him out and hatches more and more devious and grisly methods for disposing of the body–and later of Nige’s roommate, pudgy, clueless Maori roommate Gav, who adds a touch of sweetness with his persistent obliviousness to the pair’s fiendish doings.

It’s a feather-weight film, but one with many funny moments. It also shows off some parts of New Zealand seldom used in films, starting off in the southernmost and westernmost city, Invercargill, and the bleakly beautiful Catlins, on the southeast coast.

From the ridiculous to the sublime. Journal de France (2012) presents a sort of professional autobiography of the great French photographer and filmmaker Raymond Depardon. The framing situation is a journey through France that Depardon takes (supposedly alone, though there is someone there to film him), photographing landscapes and villages with his big view camera (bottom). There’s a charmingly chatty scene of him photographing four aged men who had posed for him in the same spot earlier (top).

Interspersed is footage from throughout Depardon’s career. This is presented in voiceover by co-director Claudine Nougaret, the filmmaker’s partner in private life and his long-time sound recordist. Much of this footage didn’t make it into the finished documentaries, including practice shots from when Depardon was learning the trade and amazing footage of many of the major events of the late twentieth century. Depardon travelled widely, often going into war-torn areas of Africa, such as Biafra in the late 1960s. His candid footage of people in the streets of Prague during its invasion by Russian tanks in 1968 is astonishing. Also memorable is a shot of Nelson Mandela quietly sitting in a chair. Depardon asked him to sit for a minute without speaking. Without a watch, Mandela timed it to the second. He learned the trick while in prison.

One comes away with a sense of not just a man with a keen eye and a great deal of patience. Depardon’s bravery and  political conscience allowed him to leave behind a legacy of images with an immediacy that brings half-forgotten historical moments to vivid life.

Now I’m off to the Granville again, to see a Japanese film and then a South Korea one. David will blog about these in a future dispatch.