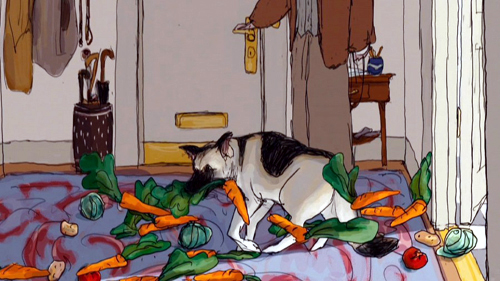 Tulip’s unique way of expressing delight at the prospect of walkies.

With David still recovering from pneumonia, I drove down to Champaign-Urbana by myself for a truncated Ebertfest visit. As always, 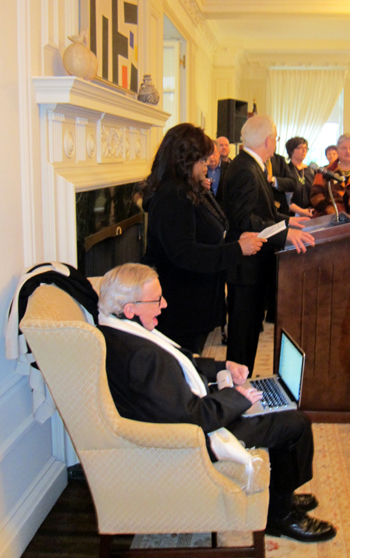 [2]the event began with a reception at the president’s home, where Roger delivered a speech via his talking computer (left).

This year, rather than kicking off the festival with a Wednesday-night screening of a 70mm print, the opening program was a screening of the restored version of Metropolis, incorporating footage found in Argentina. (David has already blogged about the new version [3], having seen it last year at the Hong Kong Film Festival.) I had the privilege of introducing the screening.

Roger’s program notes [4] gave a good summary of the film and its latest restoration, so I talked a little about why it’s not all the odd that a nearly complete print should be found in Argentina. First there’s the matter of what happened to prints at the end of their theatrical circulation in the silent era. Films didn’t open around the world day and date the way they do now. Prints might be exhibited in one country, then move onto another with new intertitles in a different language cut in. They might be shown for years, until their useful life was over. By that point they might have reached places far away from their place of origin. They were also usually covered with scratches and lines, and they weren’t worth the cost of shipping them back to their makers. They might be buried, as was the case with the 1978 Dawson City find in Alaska, or stored in the attic of a theater, or rescued by a projectionist who tucked them away in a garage. In some cases, collectors acquired them, as happened with the Argentinian Metropolis print. Occasionally these treasures come to light, as recently happened when the Film Archive of New Zealand [5] located several American titles, such as John Ford’s lost silent film Upstream. So far-flung places that long ago were the end of the line for prints are where we might expect them to resurface. Indeed, New Zealand’s archive also held a print of Metropolis that contained some shots not found in earlier restorations or in the Argentinian print, and these appear in this latest version.

A second reason why Argentina is not a surprising place to find a long print of Metropolis has to do with the German film industry’s strength after World War I. Despite having been defeated, the country built up its production until it was second only to Hollywood. European companies found it difficult to sell their films in the U.S.; then, as now, American films dominated their domestic market. German companies sought other areas where they could compete on a more equal footing. They were quite successful in South America, and Fritz Lang’s films were among the most popular there. Small wonder, than, that a well-worn, largely complete print should survive there.

The original score has been reconstructed, but as has become customary at Ebertfest, the Alloy Orchestra supplied their own original accompaniment. (See below.)

The thing that sets Ebertfest apart from other festivals is that it reflects the taste of one person. Roger chooses the films, and his reviews are reprinted in the program as notes. When Roger saw the acclaimed animated film My Dog Tulip [6], based on J. R. Ackerley’s memoir about life with his Alsatian, he was reminded of another man whose only love was his dog, Umberto D. So, having the ability to program of double feature of the two films, Roger did. Apart from the annual silent film, Ebertfest seldom shows older classics, so this was something of a departure. I had only seen a 16mm copy of Umberto D, way back in my graduate-school days, so it was great to see a 35mm print on the big Virginia Theater screen.

The juxtaposition of the two films worked well, with the grim image of old age and despair of Umberto D followed by the nostalgic but fairly upbeat My Dog Tulip. Judging by the questions and comments afterward, the latter struck a particular chord with dog lovers in the audience, and during the remainder of my stay I heard many pet anecdotes exchanged among people around me.

The film was created by a husband-wife team, with Paul Fierlinger drawing on a digital tablet and Sandra Fierlinger painting in the colors with a computer program. As I pointed out during the panel discussion [7] after Nina Paley’s Sita Sings the Blues was shown at Ebertfest in 2009, computer animation doesn’t mean that the computer does all the work. Far from it. A computer has to have a lot of material fed into it before it can aid in the filmmaking process. Each frame of My Dog Tulip was done by hand, and it has the look of traditional cel animation. (As with traditional cel animation, the Fierlingers use each image twice in a row, so that only twelve drawings suffice for a second of film.) There’s a deliberately rough, slightly jittery look to the outlines of the figures in the shots, helping give that impression of drawn animation.

Ordinarily I would have preferred to see the film in 35mm, but Paul and Sandra told me that the 35mm prints actually washed out some of the vibrancy of the intended colors. The digital print projected at Ebertfest definitely did the colors justice. 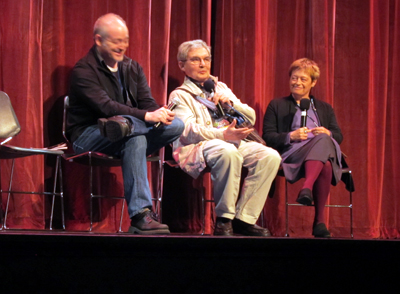 On Friday, two very well-known directors presented beautiful, color, widescreen 35mm prints that looked terrific–and huge–on the big screen. (I was sitting in the second row for one, the first row for the other, so the effect was particularly overwhelming.) I had missed Richard Linklater’s most recent release, Me and Orson Welles, in first run, so it was a pleasure to catch up with it. As all the reviewers remarked, Christian McKay uncannily impersonates the real Orson Welles. As Linklater pointed out, McKay was in his 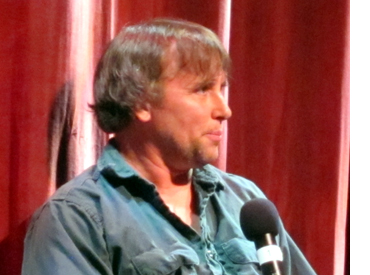 [9]mid-30s at the time of filming, while Welles was a mere 22 during the time depicted–and yet the portrayal works, since Welles didn’t really look young, even at the beginning of his career.

The film pulls a great deal of humor out of rehearsals for Welles’s famous 1937 staging of Julius Caesar, with the director’s whims and ego dominating the proceedings, and Zac Efron’s stagestruck high-school kid providing a naive point of view of the backstage politicking. Given all the antics in the lead-up to the premiere, it’s impressive that Linklater manages to switch gears abruptly and present snippets from the production itself that genuinely suggest the impact of Welles’s revolutionary staging. It wowed New York and pioneered the way for modern-dress versions of the Bard’s works.

The on-stage discussion after the film revealed that the production, which manages to convey 1930s New York so convincingly, was mostly shot on the Isle of Man. The British island not only offered favorable production incentives, but it boasted a well-preserved local playhouse that could double for the long-since-destroyed Mercury Theater. 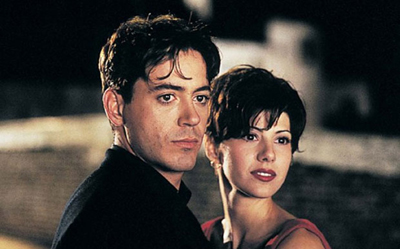 After Jewison moved from television into feature films in the 1960s, his early projects included two Doris Day and Rock Hudson comedies (The Thrill of It All and Send Me No Flowers), and he returned to the genre with Moonstruck.

Only You has a slender plot in which the heroine, convinced that a Ouija board has given her the name of the man she will marry, abandons her fiancé to follow a man she thinks is her destined true love across Italy. Cinematography by Sven Nykvist and location shooting in Venice, Rome, and Positano give the film considerable charm.

David has been recovering well, but I didn’t want to leave him alone too long. I returned home today rather than staying through the entire festival. But it was a wonderful few days, and I enjoyed talking with Michael Barker, Paul and Sandra Fierlinger, Kevin Lee, Michael Phillips, David Poland (when he wasn’t busy chasing his lively 15-month-old son), some of Roger’s “Far-flung Correspondents,” and many of the devoted audience members who return year after year to this unique event. With luck, both David and I will be there for the whole event next year. 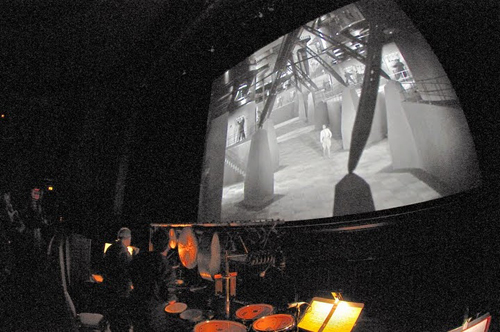 Note: For a second year, the introductions, post-film discussions, and morning panels were streamed live, and they’re also archived online [12].