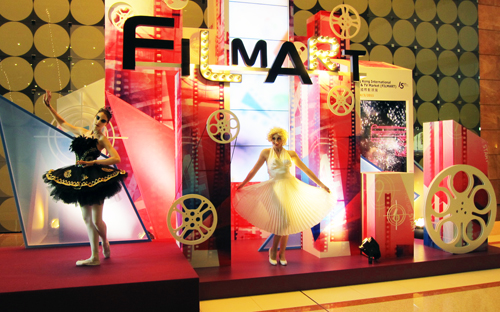 Kids, what starts with f and ends in art? No, not that. It’s Filmart, the annual trade gathering that kicks off the Hong Kong Film Festival. Add a space and a capital, and you have the main title of one of our books. Sometimes accidental cross-promotion can work out pretty well, as you see above.

Seriously, though, Filmart is a wonderful event. It includes an opening ceremony to launch the festival, the Asian financing forum known as HAF, the Asian Film Awards (covered a bit here), and a teeming meet-and-greet that sponsors panels, lunches, and hundreds of booths that allow media buyers and sellers to get together. I’ve covered Filmart in 2007 [3], 2008 [4], 2009 [5], and 2010 [6]. Here are some comments and images from last week’s edition.

The shebang started with the ceremony introducing some of the opening films and their stars. Here the Filmart’s official hostess, Miriam Yeung, is about to go onstage to greet the audience. 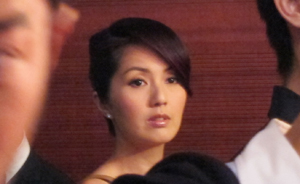 And here at the ceremony are the three stars of Don’t Go Breaking My Heart, Gao Yuanyuan, Daniel Wu, and Louis Koo. 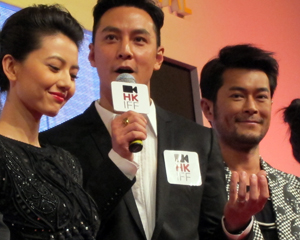 Ho Yuhang’s clever neo-noir Open Verdict was a highlight of the shorts collection Quattro Hong Kong 2. Here he is with his star, the radiant Kara Wai Ying-hung, Shaw Brothers action queen and star of both Open Verdict and Ho’s earlier feature Daybreak. 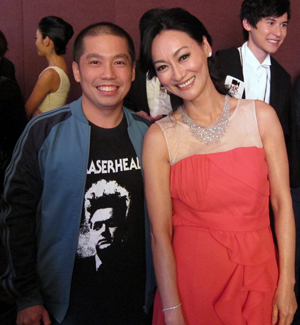 Filmart’s main business takes place in a vast hall, with companies’ displays lined up in rows and along aisles. Most firms have fairly modest stalls, but others are flamboyant, like these big boys for Mei Ah and Universe, two long-established Hong Kong production/ distribution companies. 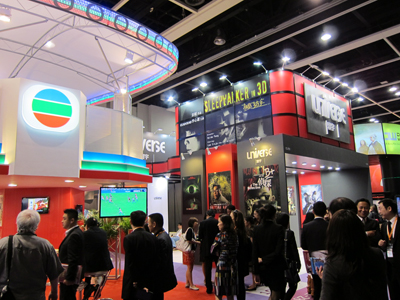 But the place isn’t so big that you can’t run into old friends, like Margaret Pu (far right) and her colleagues Jack Lee and Dan Zhu from the Shanghai Film Festival. 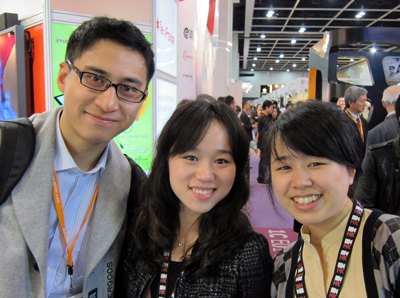 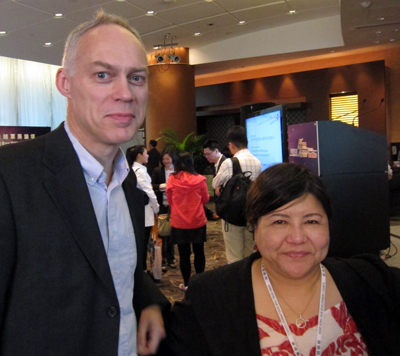 At Filmart one can always find some unclassifiable items, as witness the project pictured at the very end of this entry.

New Action on the Mainland 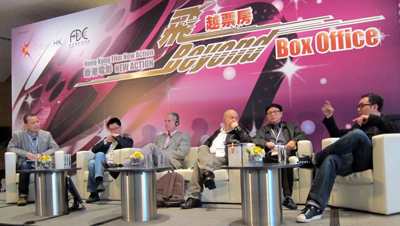 Most panels ran opposite film screenings, so I usually plumped for the movies. But I did attend an intriguing session on “Beyond Box Office: China: The World’s Largest Developing Market.” Sponsored by the Hong Kong Film New Action committee and moderated by Shanghai media executive Bill Zhang Ming, the panel included many Chinese figures and the American Ted Perkins, who has worked for both Warners and Universal and is now serving as executive VP of production for IDG China Media [14].

Some of the themes discussed echo things I talked about in the added chapters of Planet Hong Kong, but I garnered some new information as well.

*Several panelists pointed out that the stupendous growth in the Chinese box office, over 50% each year, demands that many new cinemas be built. The major cities have now got a good supply of screens, but now the third- and fourth-tier cities need to have more screens. Some commentators spoke of a “new five-year plan” aiming to upgrade and increase the nation’s screens.

*As in America and other countries, a few films typically garner the lion’s share of receipts; one panelist estimated that 80% of income stems from 20% of the films. For the foreseeable future, the big films, from China or the US, will drive the market.

*The growth of the market is even more remarkable given the comparatively small audience (around 20 million, one panelist surmised). Average ticket price is 32 renminbi, or about US$4.88.

*Hong Kong remains essential to the mainland market but also vulnerable. Films with local stars and directors can succeed, and Hong Kong is a key site for financing and packaging projects. But purely local films will remain low-budget items; the bigger films will be mainland co-productions, with some PRC talent and scenery on the screen.

*The popular audience, according to screenwriter-producer Qi Hai, is driven by female tastes: date movies are chosen by the woman, and family films are picked by mothers.

*Ted Perkins pointed out that although recent growth is good for all players, in any film industry there are always more funds in production than can be recouped overall. There will be winners and losers, especially if there’s an overabundance of production, as there currently is on the mainland. Although about 500 films were produced last year, more than half did not find theatrical release or screen in the best cinemas. (Panelists’ estimates of unseen or underseen titles varied from 250 to 400.) Marcus Lim provides a comparable set of figures [15].

*Some panelists opined that the market lacks directors and stars who are likely to provide success. One panelist estimated that only half a dozen directors have strong track records, and only one star, Ge You, can guarantee an audience.

*Most panelists agreed that 3D was not viable for most films, but in China the new format can help the business in an unusual way. Historically, most mainlanders couldn’t afford going to films, so they aren’t in the habit of attending theatres. They watch films on video or on the Net. Curiosity about 3D may attract new cinemagoers, “educating” spectators to the pleasures of seeing movies on the big screen.

*Most big countries have a well-structured pattern of “windows,” whereby a film moves from the theatre to video, cable, and online. But in China, the expansion of screens is occurring simultaneously with the growth of online distribution, with the danger of piracy. The Chinese will have to come to grips with decisions about pricing and more stable windows.

Seldom do we have a chance to realize that we’re witnessing a historic change in the global film industry. The rise of China is such an event, and film historians should be watching the unfolding process closely. 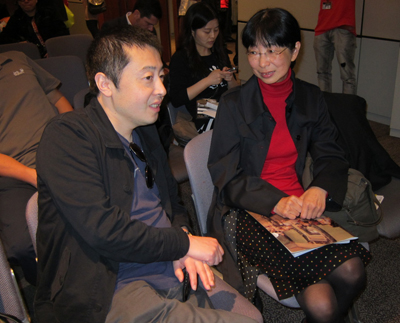 The Jockey Club Cine Academy [17], formed last summer, is an educational enterprise guided by the HKIFF Society and funded by the Hong Kong Jockey Club Charities Trust. It’s a three-year program aiming to increase film literacy among young people. The Academy held a major event during Filmart, a nearly three-hour master class with Jia Zhangke, director of Platform, The World, Still Life, and most recently I Wish I Knew. High school students made up a large part of the audience.

Researcher and editor Wong Ain-ling (above, with Jia) interviewed him about his career and then opened things up for questions. Here are a few points Jia made.

*His recent turn toward documentary filmmaking isn’t a new development for him. When he was starting out, documentaries were the most dynamic part of the PRC film scene. Although the films captured aspects of contemporary life ignored by mainstream movies, they were seldom watched by audiences. So the question for Jia became: “How to change our film ecology?”

He has used a documentary project to spark a fiction feature. In Public (2001) became a draft for Unknown Pleasures. Jia enjoyed eliminating dialogue and narration from his documentaries, relying on peoples’ faces and situations to convey ideas. Critics complained that documentarists couldn’t tell stories, but he wanted mainland audiences to learn to find the latent emotions in the scenes, the “poetic” side of realistic cinema.

*His early films incorporated popular music, including Taiwanese tunes sung by Teresa Teng. Why? During the 1980s and 1990s, mounted loudspeakers broadcast a lot of Mandarin pop songs, making this music just part of a city’s ambience. This was something he exploited in his first feature, Xiao Wu.

*Jia had arguments with censors on his first three features, and those films weren’t widely seen. But in 2004, the censorship system changed, mostly for the better. Yet distributors still block films shot on video from being shown in cinemas, creating what Jia called a “technical censorship.”

*The reports are true: He is making a martial arts film with Johnnie To’s Milkyway firm. Jia wants to examine the imperial system in the period around 1900. He would like to follow it with another historical film, this one about Hong Kong in 1949, centering on two characters, a Communist and a KMT Nationalist.

Like Hong Kong itself, Filmart has a pulsating energy and offers an overwhelming array of choices: you can watch movies, attend events, and just gawk. You must run to keep up. That’s as it should be.

For more coverage of industry doings at Filmart, see Liz Shackleton’s rundown [18] at Screen International (may be proprietary). Another story in Screen International [19] mulls over the prospect that China could fairly soon become the world’s biggest market. See as well several items at Film Business Asia [20], particularly Stephen Cremin’s article [21] on Chinese coproductions. For our takes on some Jia Zhangke films, you can go to this category [22].

PS 31 March (HK time): I should have mentioned what the New Action panel did not: Piracy. The LA Times has a good recent article [23] on DVD bootlegging in the PRC, raising the crucial factor I’ve heard mentioned as well: the role of the People’s Liberation Army. 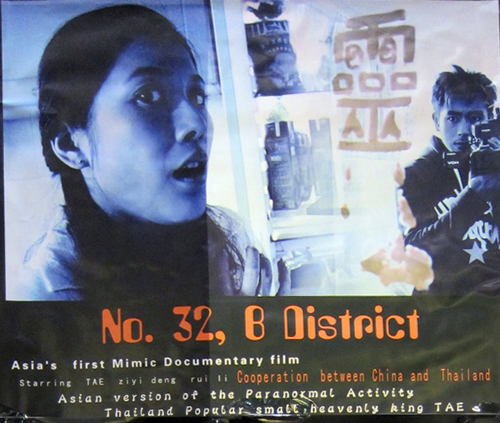