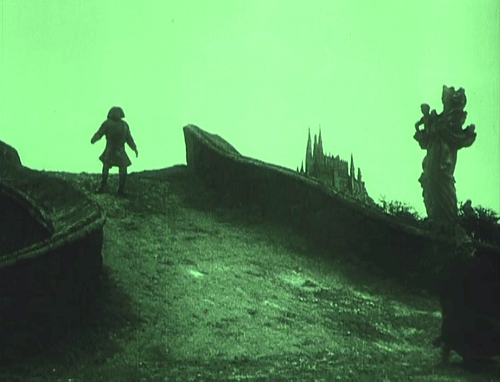 In 2009, Il Giornate del Cinema Muto, the silent-film festival held each year in Pordenone, Italy, launched a new series. “Il canone rivisitato/The Canon Revisited” [2] addressed the fact that many rare and often obscure silent films are made available through restoration each year, and yet many young enthusiasts who have started attending the festival have seldom had the chance to see the classics on the big screen with musical accompaniment. The opening group of films proved highly successful, and “Il canone rivisitato 2” will be presented this year, when Il Giornate [3] will run October 2 to 9.

Part of the point of the series is to have historians re-evaluate these classics and examine how well they live up to their status as part of the film canon. Last year I contributed a program note on Paul Wegener and Karl Boese’s 1920 German Expressionist film Der Golem. This year I’ve written about Danish director Benjamin Christensen’s 1916 thriller Hævnens Nat (Night of Revenge, released in the U.S. in 1917 as Blind Justice), which will be shown this year, and rightly so.

When I went back and reread my Golem notes to remind myself what sort of coverage is needed, I decided that the text I wrote then might be of wider interest to those who weren’t at the festival last year. Thanks to Paolo Cherchi Usai, one of the festival’s founders and organizers, for permission to revise my brief essay as a blog entry. I’ve changed it minimally and taken the opportunity to add illustrations. Here’s what I said at the time:

Der Golem is a classic film—doubly so.

First, it has long nestled comfortably within the list of titles that make up the German Expressionist movement of the 1920s. Teachers of survey history courses are more likely to show Das Cabinet des Dr. Caligari (which premiered in early 1920) but a serious enthusiast will make it a point to see Der Golem (which appeared later the same year) as well.

From the start, reviewers recognized Der Golem as Expressionist. In 1921 the New York Times’ critic wrote, “Resembling somewhat the curious constructions of THE CABINET OF DR. CALIGARI, the settings may be called expressionistic, but to the common man they are best described as expressive, for it is their eloquence that characterizes them” (George Pratt’s Spellbound in Darkness, p. 362). In 1930, Paul Rotha’s The Film Till Now, the most ambitious world history of cinema in English to date, appeared. Highly influential in establishing the canon of classics, Rotha adored Weimar cinema, including Der Golem.

In 1936, the Museum of Modern Art obtained a large number of notable European films. The core collection of the young archive contained such prestigious titles as Caligari, Battleship Potemkin, Metropolis, and Der Golem. These films soon became part of the museum’s 35mm and 16mm circulating programs. With MOMA’s sanction as historically important classics, they remained the most widely accessible older films available to researchers and students alike for many decades.

There is, however, a second, largely separate audience: monster-movie fans. Starting in the 1950s, German Expressionist films were promoted as horror fare by Forrest J. Ackerman in his magazine Famous Monsters of Filmland. In 1967 Carlos Clarens included Der Golem in his An Illustrated History of the Horror Film. Really dedicated horror devotees pride themselves on their expertise across a wide variety of films, including foreign and silent ones. Der Golem became a certified horror classic. 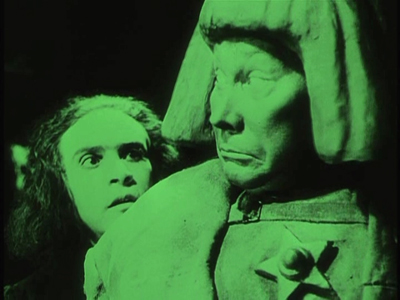 In the 1950s and 1960s, companies offering public-domain 8mm and 16mm copies for sale enabled both film-studies departments and movie buffs to start their own film libraries. Ultimately home video made previously rare silent classics easily obtainable—including a restored Golem from the Friedrich Wilhelm Murnau-Stiftung, with new tinting and a musical score, on DVD [5]. Such a presentation reconfirms the film’s status as a classic.

But what sort of classic is it? An undying masterpiece that one must see immediately? A film one should definitely watch someday if the chance arises? On the occasion of Der Golem being presented on the big screen with live musical accompaniment, we have a chance to specify what distinguishes it from its fellow exemplars of Expressionism.

I suspect that horror-film fans won’t feel that a reevaluation is necessary. Der Golem is a forerunner of Frankenstein and hence an important early contribution to the genre. It’s a striking film to look at and obscure enough to impress one’s friends during a late-night program in the home theater.

But for film historians returning to Der Golem in the early twenty-first century, after nearly ninety years of taking it for granted, what is there to say? 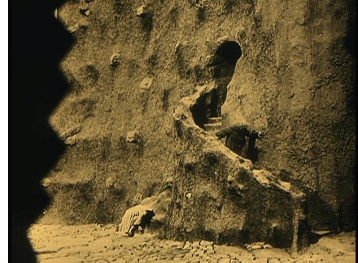 [6]Some would deny that Der Golem is truly Expressionistic. If one has a very narrow view of the style, insisting that only films with flat, jagged, Caligari-style sets qualify for membership in the movement, then Der Golem doesn’t pass muster. Neither do Nosferatu, Die Nibelungen, Waxworks, and a lot of other films typically put into the Expressionist category.

For me, seeing Der Golem again doesn’t much affect its status as an historically important component of the German Expressionist movement. It’s not the most likeable or entertaining of the group. Caligari has more suspense and daring and black humor. Die Nibelungen has a stately blend of ornamental richness with a modernist austerity of overall composition, as well as a narrative that sinks gradually into nihilism in a peculiarly Weimarian way.

Moreover, Der Golem’s narrative has its problems. None of the characters is particularly sympathetic. Petty deceits and jealousies ultimately are what allow the Golem to run amok. The narrative momentum built up in the first half of 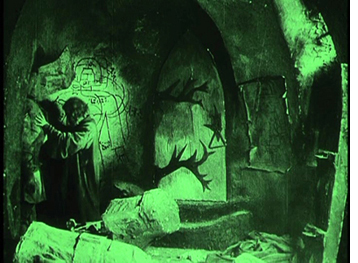 [7]the film is inexplicably vitiated for a stretch. Initially the emperor’s threat to expel Prague’s Jews from the ghetto drives Rabbi Löw to his dangerous scheme of creating the Golem to save his people. Yet after the creation scene, the dramatic highpoint that ends the first half, we see the magically animated statue chopping wood and performing other household tasks that make his presence seem almost inconsequential. The imperial threat has to be revved up again to get the Golem-as-savior plot going again.

But putting aside Der Golem’s minor weaknesses, it has marvelous moments that summon up what cinematic Expressionism could be: the opening shot, which instantly signals the film’s style (below); the black, jagged hinges that meander crazily across the door of the room where Löw sculpts the Golem; the juxtaposition of the Golem with a Christian statue as he stomps across the crooked little bridge returning from the palace (at top).

Hans Poelzig was perhaps the greatest architect to design Expressionist film sets. He designed only three films, and Der 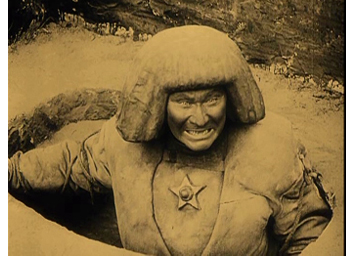 [8]Golem is the most important of them. Once the monster has been created, Poelzig visually equates the lumpy, writhing towers and walls of the ghetto and the clay from which the Golem is fashioned. The sense that sets and actors’ performances constitute a formal, even material whole became one of the basic tactics of Expressionism in cinema.

Speaking of performances: A lot of the actors in German Expressionist films were movie or stage stars who didn’t specialize in Expressionism. There were, however, occasional roles that preserve the techniques the great actors of the Expressionist theater. There’s Fritz Kortner in Hintertreppe and Schatten. There’s Ernst Deutsch, who acted in only two Expressionist films, as the protagonist in the stylistically radical Von morgens bis Mitternacht (out this month on DVD [9]) and as the rabbi’s assistant in Der Golem. 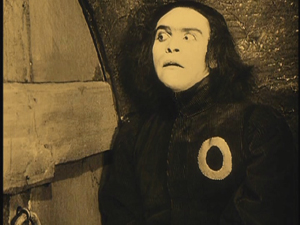 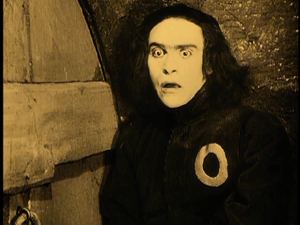 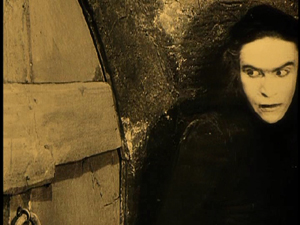 Just watching his eyes and brows during his scenes in this film conveys something of the experimental edge that Expressionism had when it was fresh—before its films had become canonized classics. 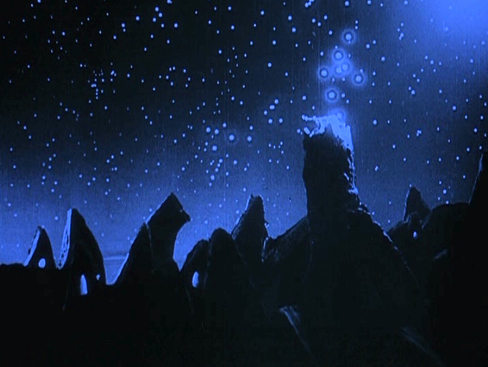