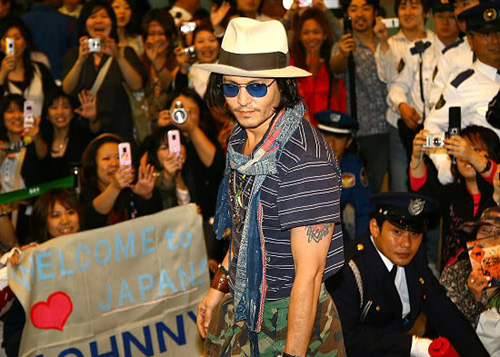 Promoting Pirates of the Caribbean in Japan (By tralala.online)

When was the last time you heard someone complaining about the high cost of the latest Toyota prototype? Probably not recently, since car manufacturers don’t tend to boast about how much it costs them to design a new model. In fact, I couldn’t find any information on how much the development of automobile prototypes costs. Some new models catch on, some don’t. Presumably some don’t make a profit for their makers. The same tends to be true for other big-ticket items.

In a way, a film’s negative is like a prototype. It costs a lot for a mainstream commercial film to be made, tens or hundreds of millions of dollars in many cases, before the first distribution print is struck and the first ticket sold. Yet once that prototype exists, any number of distribution prints can be struck, and a film may make back many times its negative cost.

[Added October 28: A friend of mine privy to information about car manufacturing informs me that an ordinary prototype runs $50 to 250 million. A radically new product like an electric car could run over a billion. And car companies do keep those figures secret, so it’s no wonder I couldn’t find them.

Coincidentally, $50 to 250 million is pretty much the range of budgets for mainstream commercial Hollywood features these days.

My friend told me other things about car manufacturing that make it sound as though the comparison between the two industries is a pretty reasonable one.  For example, car companies can save money by releasing new, slightly modified versions of a popular model, such as the Honda Civic, rather than designing a new model from the ground up. Sort of like sequels in the film industry. More surprisingly, when car manufacturers (and some companies in other industries) make their products by outsourcing some of the components, they call it the “Hollywood model.”]

For some reason, the cost of making that negative is often public knowledge. To some extent, at least, since we all know that the budget as acknowledged by a studio may be considerably less than the actual costs. The notion that a movie set its company back by $200 million is to some extent a selling point. I’m sure that back in 1922 Universal wasn’t happy that Erich von Stroheim’s Foolish Wives ended up costing more than a million dollars. Still, they turned it to their advantage by advertising it as the first million-dollar movie, and studios have been using the same tactic ever since.

The producers and makers of other kinds of artworks don’t tend to make such information public. How much does it cost to put on a symphonic concert or publish a book? We may hear about big advances paid to an author, but that’s basically a lump-sum against future royalties, and the author doesn’t get any more until–if ever–the advance is paid off. But how much do editorial supervision, printing, and binding set a publisher back? What kind of money goes into the creation of a large stone sculpture?

Journalists looking for a hook for an article about movies find a sturdy one in the idea that today’s film budgets are bloated. They point to classic movies of decades past that cost only a few million to make and then compare these to the loud, overblown summer tentpoles of today, with their multi-hundred-million-dollar costs. Of course this overlooks the inflation of the dollar over the years. In the 1950s the average family income was about $5000 and an average house cost under $20,000. A penny bought a gumball and could be used in parking meters. Just about everything costs a lot more now.

To be sure, other factors have raised the budgets of films well beyond what they would be through inflation alone. The key factors have been star salaries and computer-generated special effects. The latter can account for half the cost of an effects-heavy film. Beyond the negative cost, typical budgets for prints and advertising have skyrocketed.

Some people seem to see an innate immorality in today’s biggest budgets, as well as an almost inevitable lack of quality in the films that result. Here’s one of the first results of a search on “big budget movies,” from Dmitry Sheynin on suite101.com [1]. He even makes the car comparison:

The film industry has had a good summer this year – action sequences were bigger than ever, and expensive displays of pyrotechnics and CGI showcased new and exciting ways to destroy cinematic credibility.

With the economic crisis forcing many companies to scale down or even discontinue some of their more opulent product lines (think GM), it’s comforting to know Hollywood studios are still spending inordinate sums of money producing bad movies.

I think that’s fairly typical of the grousing you find on the internet and in print. No doubt Hollywood produces many bad movies. But actually, it is comforting to know that Hollywood is still spending great sums of money, ordinate or in-, if you think of the welfare of the country as a whole.

Every now and then I’ve pondered the possibility that American movies must be one of the products, if not the product, that has the most favorable balance of trade. While the US doesn’t have quite the stranglehold on world film markets that it used to, most significant Hollywood films get exported to numerous countries. Conversely, very few films from abroad are imported, and those that come in, especially the foreign-language ones, play in far fewer theaters and sell far fewer tickets than do domestic films. In 2006, according to US census figures, [2] foreign films took in $216 million in the U.S., while domestic films sold $7.1 billion worth of tickets. So that’s 3% of the U.S. market for imported films, which is the figure I’ve heard pretty consistently for decades.

(In passing, I note from the same report that theaters made 66% of their income on tickets, meaning that we moviegoers spend about a third of our cash on all that stuff in the lobby.)

Turns out my ponderings have been correct. On the Motion Picture Association of America’s “Research & Statistics” [3]page, there appears the claim, “We are the only American industry to run a positive balance of trade in every country in which we do business.” (“The industry” includes both film and television.) In April the MPAA put out its latest annual report [4], “The Economic Impact of the Motion Picture & Television Industry on the United States.” The combined trade surplus in the moving-picture industry for 2007 was $13.6 billion, or 10% of the US trade surplus in private sector services. According to the report, “The motion picture and television surplus was larger than the combined surplus of the telecommunications, management and consulting, legal, and medical services sectors, and larger than sectors like computer and information services and insurance services.”

Lest anyone think these figures are mere industry propaganda, the MPAA’s information, though made public, is gathered for the benefit of the film studios, which collectively own the association. Screen Digest [5], a highly respected trade publication, summarized some of the report’s material in its September issue (“Film and TV Are Key to US Economy,” p. 265).

For better or worse, most films that are really successful abroad are big-budget items, with lots of expensive special effects and (usually) top stars. Back in 1997 people were aghast at the first $200 million movie, Titanic—until it brought in nearly $2 billion around the world. Here, in unadjusted dollars, are the top foreign earners for the past nine years (not including domestic box-office):

Add in the DVDs and ancillary products, and the balance of trade gets even more favorable.

Yes, it may sound absurd that it requires $200 million to make a movie, especially one that gets mediocre reviews from critics and fans. Still, from a business point of view, it makes sense and it’s good for the country. It’s especially important in a period of financial crisis, when the movie industry’s income seems considerably less affected than many others. Our overall trade deficit is falling, since Americans are saving more and buying less from abroad. This year the film and television industry’s share of the surplus will presumably grow.

Apart from the balance of trade, according to the MPAA report, in 2007 the moving-image industry also employed 2.5 million people, paid $41.1 billion in wages, spent $38.2 billion at vendors and suppliers, and handed over $13 billion in federal and local taxes.

If you think the trade deficit doesn’t affect you, think again the next time you travel abroad and curse the exchange rate with the euro or the yen.

No doubt there’s a great deal of waste and slippery dealing involved in those huge budgets, but there are definite advantages that don’t get considered often enough.

I do see a lot of foreign cars on the roads. 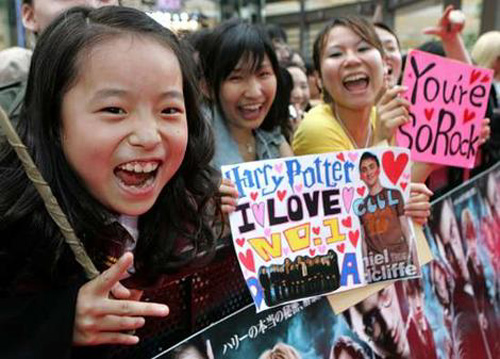 [October 23: Coincidentally, two days ago Steven Saito posted a story [6] on how foreign-language films that have achieved blockbuster status in the rest of the world don’t stand much of a chance of getting into the American market. He mentions the “Christmas Vacation” series that I referred to in an earlier post [7].]