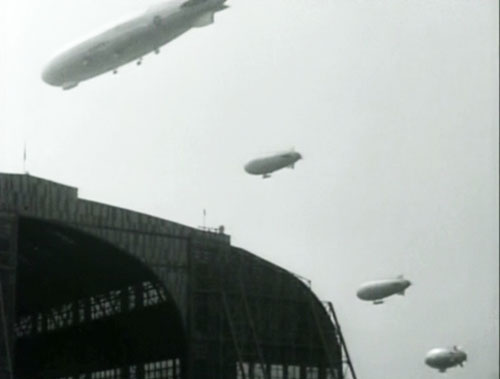 Back in July, when I was watching films at Il Cinema Ritrovato in Bologna, I managed to catch several of the films in the Frank Capra retrospective. Two of them, Dirigible (above and left) and Submarine, were surprisingly spectacular, given that at the time Columbia was still a relatively minor studio. It wasn’t known for high-budget items. How had Capra managed such lavish-looking films? One clue lies in the title at the beginning of Dirigible: “Dedicated to the United States Navy without whose cooperation the production of this picture would not have been possible.” Clearly the film’s second sequence (from which both frames here were taken) was shot at an actual air field with real planes and dirigibles. Many shots in the scene were taken during what seems to have been a public air show.

I recalled that when I was growing up, every now and then a movie I saw had a similar acknowledgement. Jimmy Stewart and other stalwart stars played government employees of various sorts, with pictures of impressive buildings in Washington and superimposed titles thanking this agency or that for its aid.

It also reminded me of The Lord of the Rings. One sequence in The Return of the King, the battle before the Black Gates, was shot in an old military practice range of the New Zealand army (right and below). The country, with its lush forests and stunning mountains, is short on desolate plains. The practice range was the only suitably Mordor-like landscape that could be found. 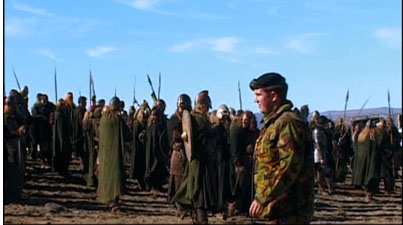 Not only did the army clear the field of unexploded ordnance, but it supplied soldiers to serve as extras by playing the Gondorian troops. The supplement on the extended-version DVD, “Cameras in Middle-earth,” shows these troops, as well as the officers who gave them orders. Apparently the soldiers were far more capable than regular extras of marching in straight lines and less willing to merely mime fighting during the battle.

All this got me to wondering how much free or cheap labor and mise-en-scene movies have received from the military over the years. Coincidentally, when I got home in July, the stack of magazines awaiting me included an issue of Variety with the headline “Tanks a Lot, Uncle Sam,” on this very subject. In the article [1] author Peter Debruge explains a lot about the nuts and bolts of how the military’s contributions work. (As often happens, Variety opted for a more dignified title for the same article online: “Film biz, military unite for mutual gain.”)

The occasion was the release of Transformers : Revenge of the Fallen. Lt. Col. Greg Bishop, an Iraqi vet appointed last year to handle the Army’s interface with Hollywood, says of it, “This is probably the largest joint-military movie ever made.” Indeed, Transformers enjoyed the assistance of four of the country’s five military branches, with the Coast Guard being the only exception. That’s unusual, as Bishop points out. Black Hawk Down mainly called upon the Army, Top Gun upon the Navy, and Iron Man upon the Air Force.

Debruge doesn’t offer a lot of historical background, but he does mention that the Vietnam War led to a period of anti-military films. Naturally the armed forces didn’t supply aid to films excoriating them. In recent decades relations have become chummier.

What are the typical financial arrangements? According to the article,

Hollywood has every incentive to seek the military’s blessing. A film like ‘Transformers’ gets much of the access, expertise and equipment for a fraction of what it would cost to arrange through private sources, with the production on the hook only for those expenses the government encounters as a direct consequence of supporting the film (such as transporting all that megabucks equipment to the set from the nearest military base). But the production pays no location fees for shooting on military property and no salaries to the service men and women who participate in the filming, in front of or behind the cameras.

In some cases, military exercises are arranged that can be incorporated into the filming. Capt. Bryon McGarry, the deputy director of the Air Force’s PR office, is quoted concerning a day when Transformers was shooting “at White Sands when a formation of six F-16s popped flares over the set, simulating a low-level, air-to-ground attack. ‘The flyover was very much the type of training the Air National Guard does every day. Only that day, Michael Bay and his cameras had a front-row seat to the air power show,’ he says.”

This sort of military assistance isn’t available to films that shoot entirely overseas, such as Saving Private Ryan and HBO’s Band of Brothers. Hence films like Transformers and Iron Man arrange to shoot some key sequences in the American West, where deserts and mountains can convincingly double for places like the Middle East.

Even in this day of elaborate CGI special effects, many directors prefer the real thing. For one thing, it often looks more realistic, and for another, CGI is really expensive. 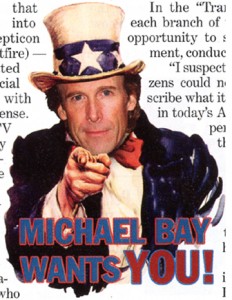 Naturally the military doesn’t do all this for nothing. They want influence over the way the Armed Forces are depicted. Spielberg’s War of the Worlds had military assistance. The Pentagon’s film laiason, Phil Strub, says, “The big battle scene at the end was going to be different. We just wanted the case made that the Marines understood that they were not going to prevail, but they were nobly sacrificing so the civilians in that valley could escape.”

Strub also decries “the enduring stereotype of the loner hero who must succeed by disobeying orders, going outside the rules by being stupid.” As Debruge points out, “By contrast, the ‘Transformers’ sequel embodies the military philosophy that teamwork is essential to success.”

The positive depiction of the military also might attract young people to enlist—and give enemies an impression of America’s overwhelming might. McGarry says, “Recruiting and deterrents are secondary goals, but they’re certainly there.”

The idea that Hollywood often gets in bed with the military won’t come as a surprise to anyone. (For a book emphasizing this aspect of the military’s involvement in filmmaking in the U.S., see David L. Robb’s Operation Hollywood: How the Pentagon Shapes and Censors the Movies [2].) But the extent to which even the biggest—or maybe that should be especially the biggest—Hollywood films boost their budgets in a big way is less obvious. From the standpoint of the business history of Hollywood, it’s fascinating and deserves a closer look. 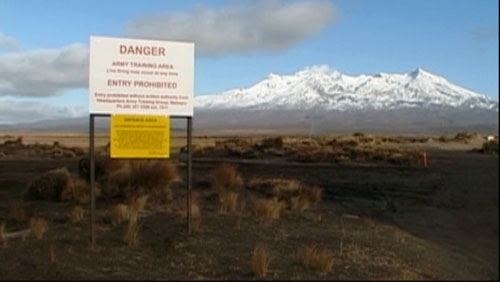