Ten AM on a Tuesday, and I’m at my local megaplex, Star Cinema. I’m here to not to see a movie, exactly, but to catch a phenomenon I’ve been curious about for some years.

To back up: Kristin and I have fallen a bit behind in our blogging. For one thing, the presidential election has been so exciting that we spend more time staring at cable news than ever before. (But the time hasn’t been wasted: the campaigns have given me an idea for a blog entry, which I hope to post next week.) Secondly, we’ve been going over the copy-edited version of the third edition of our textbook, Film History: An Introduction. It’s due out this spring, and we’ll have more to say about it later. If you want a preview now, check the new essay I posted elsewhere on this site. It’s called “Doing Film History,” [2] and it’s an updated version of the introduction that appeared in earlier editions of FH.

Kristin has been laboring over an epic blog on character subjectivity. As for me, to take a break from both politics and the textbook, I headed to Star. 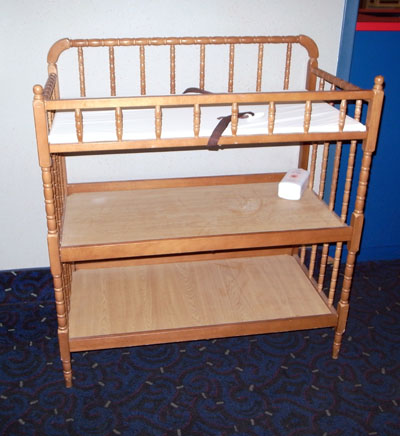 The phenomenon I was interested in goes by different names, but here in Madison it’s called Baby Box Office.

Every Tuesday morning Star runs screenings for parents and their pre-schoolers. It’s billed as a chance to bring your child to see a film in a welcoming setting. The theatre is a little more illuminated than normal, the sound a little softer. Nobody will ask the kid to shush; you can even nurse your baby. Incidentally I hope that this gets babies to associate movies with oral gratification. The future needs passionate filmgoers, not to mention film students.

You can get more details [4] from the Kerasotes chain’s website, and they’re pretty interesting. (Some theatres offer a Stroller Valet Service.) So I got curious and headed to the ‘plex.

I was surprised that five films were lined up to be screened—not Saw V and Max Payne, naturally, but a fairly wide range, including W. and a couple of animated titles. If none of the customers chooses a film, it’s not run. I asked which movie was today’s top pick, and Susan the cashier suggested The Secret Life of Bees. Buying my ticket, I met Meg and her son Connor. I asked whether she came often. With a smile, she said: “It’s been a life-saver.” She regularly meets a friend, who also has an infant, at the show.

Outside the auditorium there was a changing cot, with baby powder at the ready. Somehow, knowing it was there comforted me.

I counted twelve non-kids at the show, including a guy more or less like me (graying, maybe retired) and three young women who might have been playing hooky from high school. The show was an ordinary screening. There were local ads and video commercials. There were trailers for upcoming releases The Boy in the Striped Pajamas (Nazis with, natch, British accents), Marley and Me (a dog running in surf), The Soloist (Oscar bait), and Australia (part African Queen, part Out of Africa; I gather that She Will Fall in Love with a Man. . . and a Country).

I wish I could report that a dramatic incident, or at least an epiphany, took place during my visit. But the kids were mostly quiet. Occasionally I heard a wail or gurgle, and at one point a mother took a fretful baby out. The screening went fine. Glancing at the kids, I saw many of them staring at the screen transfixed and uncomprehending. On the basis of this experience, I’ve decided it’s better to have a squad of babies in a theatre than a few teenage boys.

As for The Secret Life of Bees: Cynics will say it’s ready for the Hallmark Channel, but I liked it. It’s what the Japanese call a “wet” film, affording many occasions for tears, in which I freely indulged. Not of much pictorial interest, it is saved, at least for me, by a robust script (tailored to Kristin’s four-part template [5]), solid performances, and sentimental situations centering on racism, child abuse, female bonding, and raging male inadequacy. Needless to say, thanks to intensified continuity [6] a lot of reaction shots [7] drive home each moment. Appropriately, the mommy audience was seeing a movie about mommies; the idealistic but forlorn little heroine winds up with three, at least.

Afterwards, I talked to a pair of ladies who had brought a toddler. While he wrestled with the steering wheel on an arcade driving game, they explained that they frequently come to the shows and are glad that Star Cinema offers them the option. I then talked at length with Star’s savvy general manager, Craig Hussin, who has been part of the Madison movie scene for many years. Craig sees Baby Box Office as part of what every theatre should do—offer the patrons many options, and do it with the sort of flair that used to be called showmanship. 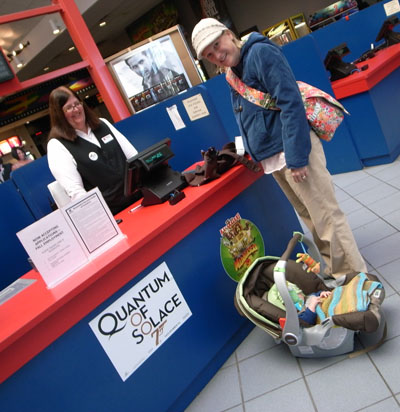 There’s a broader point of interest to us as students of cinema. I think that the phenomenon is a good example of market segmentation, which David Waterman has talked informatively about in Hollywood’s Road to Riches. (1)

Obviously, people’s preferences about movies, as about anything else, differ. Some people want to see a movie the day it’s released; others are willing to wait a while. So it’s better business to charge the eager consumer more than the more cautious one. This is a form of price discrimination.

What makes the film business unusual, Waterman points out, is that it has a very wide range of price demands. Some people will pay a lot to see a film on opening night, others will pay a smidgeon to see it years later on basic cable TV, and there is a wide range of pricing options in between. Just on DVD, you can rent it new, or rent it later for less. You can buy it new, buy it discounted a few months later, or buy a used copy for still less.

In the classic studio days, the principles of market segmentation and price discrimination gave birth to a systematic strategy of distribution, discussed by historians Tino Balio and Doug Gomery (2): The run/ zone/ clearance system. A run was the period during which a film was screened in theatres. The first-run showing, usually at a well-appointed downtown cinema, gave city viewers the first chance to see the movie. The second-run shows, in neighborhood theatres and small towns, took place later, at lower ticket prices. Zones established the territory in which any title could play exclusively. Clearances were the intervals of time separating the runs, typically a matter of weeks or months.

What’s interesting is that the system is still with us. Your average Hollywood movie has its first run at a multiplex. It may get a second theatrical run at a budget theatre or campus venue. Then begins its most profitable string of runs, in the nontheatrical sector. The movie is released on various video platforms sequentially–pay per view, premium cable, airline and hotel systems, DVD, Internets, and eventually free cable. As in the old days, there are clearances between these runs; today they’re called “release windows.” You’ve probably noticed that films come to the ancillary platforms faster [10] than they did only a few years ago. This trend toward shrinking windows is, as you’d expect, a bone of contention [11] with distributors.

The point of the system is to extract the most money from the film. If films were only shown first-run, some people wouldn’t go at all. The price would be set too high for their level of interest. So the prices shrink over time, with broadcast or basic cable airings becoming the last link in the chain. Spreading out the opportunities to see the film allows people with different preferences and budgets to buy in at different points.

So I’m thinking that the Baby Box Office is a nice example of market segmentation. Parents with young children tend not to go to movie theatres. A night out is expensive, especially reckoning in babysitter costs, and many couples I know are just too tired to enjoy a movie at the theatre. If the parents take an infant to a show, it might squall and disturb others. So many parents just stay home. Baby Box Office goes after a niche market.

It’s shrewd policy to screen a recent release for Baby Box Office. If the film were in second-run, the screenings might seem a step down from what else the ‘plex is showing. But if parents see a first-run title, they can then gain the sense of participating in a current pop-culture event—an important motivator for first-run patrons—and they, like other first-run patrons, can spread word of mouth.

Do the costs make sense? At first glance, no. Babies get in free. Mom or Mr. Mom pays $5. If the child is three years old or more, that ticket costs $3. Not a huge amount of money in all: the 12 adults at my screening yielded only $60. But it’s a mistake to compare the takings with Friday-night box office, fattened by hordes of teens.

First, some of the theatre staff are working in the morning anyhow, preparing for the day’s shows, checking prints and projection equipment, talking with bookers on the phone, supervising cleaning, priming the concession stand. So running a few prints at that time of day isn’t a big extra expense. Tuesdays are theatres’ slowest days, so since you’re open you might as well get some people through the turnstiles. Then there’s the intangible factor of good will. Parents are likely to think well of a business that takes pains to cater to them, and they may be likely to return to that theatre when they get other chances.

As for price, five bucks is a little more than a DVD rental these days, so the off-hours screening is a bargain compared to standard ticket prices, but it preserves the integrity of the runs/ windows system. And the concession stand is open. There, where the real money is made, a parent can indulge a guilty impulse for Raisinets.

You can argue that the phenomenon is really a reaction to thinning theatre attendance, and that may indeed be part of the story. But more positively, Baby Box Office sessions seem to lie on a continuum with making a movie available on video, on iPods or phones, and on the Internets. Media moguls have long said that today’s consumers want their objects of desire, no matter how obscure, with maximum convenience. Media distribution has had to adapt itself to audiences’ schedules. Granted, theatres can’t do that as flexibly as video can. Still, Baby Box Office seems a logical effort by exhibitors to adjust to a world in which people expect entertainment to adjust itself to their lifestyles, kids and all. Kids especially.

(2) Gomery explains the origins of the strategy in The Hollywood Studio System: A History (London: British Film Institute, 2005), 19-20.