You are a film director. How do you convey to an audience that a character mysteriously sees hidden personalities in other characters?

Filmmakers are problem-solvers, at least sometimes, and I’ve argued elsewhere that we can often explain their creative choices as efforts to pose and solve problems. I ran across an intriguing example during my stay here in Hong Kong. I interviewed Tina Baz, the editor for Johnnie To’s film Mad Detective (2007), which I blogged about from Vancouver in October [2]. 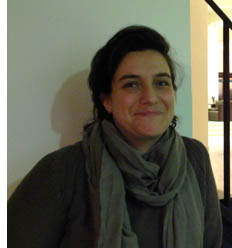 [3]Tina has a fascinating history. Lebanese and French-educated, she attended art school in Beirut and film school in Paris. Armed with a maitrise from the Sorbonne, she began editing. Over a dozen years, she has built up an impressive career [4]. She was editor on The Mourning Forest (2007), A Perfect Day (2005), and several other high-profile projects.

Mad Detective was Tina’s first film for Johnnie To, as well as her first experience with the Hong Kong crime genre. She was accustomed, she says, to the more psychologically-driven narratives of French cinema, and she had to work in a new way during the seven weeks it took to edit the film. This is an unusually long editing time for Hong Kong filmmaking, and it reflects the complicated tasks this film set her.

If you haven’t seen Mad Detective, you will probably want to stop reading. The scenes I’m discussing come fairly early in the film, but they do contain some surprises you might not want to know about in advance.

The rough cut of the film, adhering closely to Wai Ka-fai’s script, displayed a complicated flashback structure. The plot began fairly far into the action and then jumped back to establish the exposition. Central to that exposition is the film’s premise: Detective Bun, played by Lau Ching-wan, solves cases by extraordinary telepathic/ intuitive/ visionary insights. But the original cut blurred that concept, mixing it with an early revelation of the identity of the villain, a corrupt cop named Ko Chi-wai, and background on Bun’s young partner Ho. How to cut through the clutter?

The first step to a solution was to straighten out the chronology and to focus tightly on Bun from the start. The audience needed to understand the film’s eccentric psychological premise—specifically, that Bun’s gift allows him to detect multiple personalities buried within another person.

In talking with me, Tina went over three scenes that establish Bun’s peculiar abilities. (1) The sequences furnish striking examples of how filmmakers find precise technical solutions to storytelling problems. This trio of scenes also follow Hollywood’s Rule of Three. According to this, a key piece of information should be presented three times, preferably in different ways. (2) (Once for the smart people, once for the average people, and once for slow Joe in the back row.) Tina smiled. “This is not something that French directors would say.” The Rule of Three can be seen as another aid to solving the broad problem of clarity—making sure that the audience understands the story.

Discussing all three scenes adequately would take a lot of space and require dozens of stills, so I’ll concentrate on the first two. These should suffice to show how the filmmakers solved a tricky narrational problem.

The first scene takes place in police headquarters and it’s the simplest. It starts with Bun absorbing details of Ho’s investigation. We hear, offscreen, a whining woman complaining that a maniac can’t solve a case. We think at first that it’s the voice of another cop, but after a second complaint from offscreen, Bun looks up. Cut to the whining woman, who stands among the cops.

Bun rises and walks to a pudgy cop who grins ingratiatingly. Now cut from the cop to the whining woman, in a similar composition against the same background.

An over-the-shoulder shot presents Bun staring as we hear the fat cop asking, “Do you recognize me?”

After the fat cop flatters him, Bun head-butts him. Bending over the fallen cop, Bun says, “Shut up. I see and hear you, bitch!” Cut from the bloody-nosed cop to Bun to the bloody-nosed woman.

After Ho dismisses the team, Bun slowly approaches and confides: “I can see the inner personalities of a person” (below). This line of dialogue crystallizes what we’ve seen–the bitchy woman inside the ingratiating man–and prepares for the next few scenes.

The second vision scene is more complicated, and Tina had several discussions with To and Wai about whether to include it. The new problem, based on the key line above, is to establish that Bun can see not one but several hidden personalities in Ko, the crooked cop. How can this premise be shown?

The major scene coming up shows the two partners confronting Ko at a restaurant. There Bun will envision some of Ko’s inner people manifesting themselves. But there’s also dramatic conflict to be conveyed in the scene, which culminates in a beating in the men’s room. Again, too much information! Tina, To, and their colleagues decided to include an intermediate scene, one that had little dramatic consequence but got audiences more comfortable with the premise.

Ho and Bun trail the suspect along the street, first in a car and then on foot. The results have the kind of precision I’ve pointed to [16] in another Milkyway film, PTU.

In the car, Tina’s cutting establishes the differences between the two cops’ points of view. A two-shot of Ho and Bun yields to a straightforward POV shot of Ko striding along the sidewalk.

But a cut to Bun watching is followed by a shot of seven people in Ko’s place. In a nice instant of uncertainty, a few heads emerge from behind a parked van and are only partially visible. At first glance we might take them for passersby walking ahead of Ko.

Before we can fully identify this band of spirits, and as the car draws abreast, a cut to Ho watching leads to a shot of Ko, whistling.

Another cut to Bun, and now we see, as he apparently does, a full view of the platoon of Ko-personalities striding along whistling.

This mildly wacko variant is consistent with the narration’s mixed attitude toward Bun’s visions: are they supernatural insights or hallucinations?

Bun leaps from the car and pursues Ko’s band of personalities, and a new variation shows him and them in the same frame. But this is re-framed by Ho’s POV, which reasserts that to anyone but Bun, Ko is all by himself.

Abruptly, the visions halt and turn, staring at Bun. By now we are trained to understand what’s happening without a corresponding objective shot of Ko. Ko, we infer, has turned around to check on who’s following him.

Likewise, we can grasp the image of Bun passing through the group of figures as simply Bun walking past Ko.

At this point, we have no need to see the objective action. To and Tina have stressed the absence of an objective view by showing Ho, in the background, looking in another direction and missing this byplay (above). After Bun has passed, the troupe of avatars walks in their new direction, and then we get the objective shot of them “as” Ko.

This effect is anchored when Ho turns and notices Ko going into the restaurant.

As a meticulous touch, Ko’s departure from the frame reveals Bun still walking away in the distance. The geography is simple and impeccable.

The idea of seeing “inner personalities” has been made concrete while undergoing a lot of variation. Sometimes shots of the spirits are sandwiched between shots of Bun looking; sometimes not. Sometimes we have Ho to verify what’s really happening, but sometimes not. And sometimes Bun can be in the same frame as the avatars. Otherwise, Tina points out, the scenes would become boring.

Once the street scene has laid out how Bun sees Ko Chi-wai, the next scene, unfolding in the restaurant and a men’s toilet, can play with the premise still more. Tina explains that the creative team constantly asked, “How far can we go with Bun’s point of view, his vision?” Quite far, it turns out. The premise gets varied further across the whole movie, in imaginative ways. Which is to say that a solution to a problem can pose new problems, which the filmmakers go on to grapple with.

In our discussion, Tina noted that the street scene goes beyond simply giving us information. There’s a disquieting emotional effect when the spirits turn and confront Bun, their expressions ominously blank. Finding a solution to a creative problem often yields an unexpected payoff like this.

As I indicated, I can’t pursue the felicities of the restaurant scene here. Instead, here are some quick final thoughts.

*Mad Detective shows once more the power of basic techniques of performance (e.g., the act of looking), framing, and editing. To and Wai have no need for fancy CGI effects to evoke the “inner personalities” of Ko or the other cop. Our minds make the necessary connections. [34] Lev Kuleshov would have admired the engineering economy of this sequence.

*In passing Tina and I talked about actors’ eyes, a special interest of mine. (3) Tina had noticed that actors try not to blink. She agreed that blinks pose problems for editors: “Blinking is very hard on cutting.” She remarked that Elia Suleiman would strain to keep from blinking until tears flowed from his eyes.

*Mad Detective was signed by both Johnnie To and Wai Ka-fai, but their joint projects are usually filmed by To, with Wai supplying the script and consulting as production proceeds. Tina confirms To’s habit of shooting with the whole scene’s layout in his head, using very few takes per shot and not a lot of coverage. The film is “very pre-cut,” she says. You can see this, I think, in the way To relies on matches on action and ends one shot with something that prepares you for the next one.

*To follows Hong Kong tradition of adding all the sound in postproduction. This makes for economy and efficiency in shooting, but it also gives HK films the fluency of silent cinema. The filmmaker gains a freedom of camera placement and is encouraged to think about how to tell the story visually. Tina and Shan Ding, To’s all-around assistant, pointed out that sync sound might make the director depend more on dialogue and static conversation scenes. Still, I think that sometimes they wish for a scene shot with direct sound.

*As with many Milkyway films, several scenes were filmed at the company headquarters. An earlier blog here [35] discussed the ambitious rooftop set for Exiled. For Mad Detective, the fistfight in the restaurant toilet was filmed in the main men’s room of the Milkyway building, with a fake urinal added. Shan Ding provides documentation in the snapshot below, using a double for Lam Suet.

To come: Another Milkyway interview, this one with ace sound designer Martin Chappell. And a final batch of impressions from the Hong Kong International Film Festival, which ends on Sunday.

(1) If you know Mad Detective, you’re aware that Bun’s ability to discern hidden personalities is displayed in an earlier scene. But given the way in which that story action is presented, we can’t say that that his powers are established there. This scene is one of many clever narrational stratagems in a film that benefits from being rewatched.

(3) Laugh if you must, but I wrote an essay about this. “Who Blinked First?” is available in Poetics of Cinema.