More informative about American history than Fahrenheit 9/11. More brain-teasing, and far more enjoyable, than I’m Not There. Less graphically violent than almost any other movie you’re likely to see. What else could I be talking about but National Treasure: Book of Secrets?

Jerry Bruckheimer is, in my view, the most astute producer now working in Hollywood. I could cite many proofs, but let’s stick just to the first National Treasure. Here’s a movie with no pop music, no cusswords, no naked ladies, no drugs, no screwing, and scarcely any violence. (One bad guy accidentally falls to his death down a deep black hole.) When it came out—you can verify this by asking Kristin—I said that it was the ideal movie for grandparents to take the grandkids to. The man who gave us Bad Boys and CSI has realized that there’s a market niche for the PG-rated action film. So we get an amiable romp that mixes together Freemasons, the Knights Templar, the Rosicrucians, Ben Franklin, and for all I know Judge Crater, Atlantis, and the Lindbergh baby.

My colleagues, students, and wife think I’m nuts to like National Treasure. In defense I could point to evocative images like the one surmounting today’s entry, the superimposition of Grandpa Gates’ eye on a pyramid as a condensation of the Masonic/ monetary/ paternity motifs swarming through the movie. But I needn’t strain so far. The pleasures are more elemental.

Secret codes, knights, lost treasure, rich sinister Brits, really deep holes filled with cobwebs, and a cipher on the back of the Declaration of Independence—what’s not to like? All of this is pulled together by a hero who is actually intelligent and knowledgeable. He’s a nerdy patriot (another Bruckheimer touch, reminiscent of The Rock) who can turn a priceless hoard over to the US government without a quiver. How often do you find a story whose protagonists are people who know and care about the past? In the DVD supplement, an alternative ending shows schoolboys eyeing the recovered Declaration. One wonders if there’s really a treasure map on the back. The other mutters, “It’s a plot to make us learn history.” What if he is right?

Of course some will say Spielberg/ Lucas/ Kasdan did it already with Raiders. But that was a knowing effort to relive somebody’s phantom vision of B serials. Besides, does anybody believe that Indy knows as much about archaeology as Ben Gates does about nearly everything? If it recycles anything, National Treasure amounts to a revival of the wholesome 1950s Disney adventure movie. What Treasure Island (1950), Davy Crockett (1955), and The Great Locomotive Chase (1956) were for an earlier generation, National Treasure is for today’s twelve-year-olds. It compares favorably with those entries in verve, wit, and speed. (How it gets that speed is a topic I take up in “The Hook,” a new online essay [1]. That piece tries to show that even if you don’t like the movie, its narration provides a nifty tutorial in some strategies of Hollywood storytelling.) My only regret is that in the epilogue NT 1 actually uses, Ben and Abigail are given a mansion and Riley gets a cherry-colored Ferrari. That’s a bit crass. Knowledge, selflessness, and pluck should be their own rewards.

Your correspondent regrets to report that Book of Secrets is not up to its predecessor. It’s still quite entertaining, and it has some transitions as clever as those I talk about in the aforementioned essay. The premise, involving the Lincoln assassination and the besmirched reputation of Ben’s ancestor, is workable and even moving, grounded as it is in parallel father-son reconciliations. The clue-sequences are more ingenious than, say, the simple linear connectives in Bourne Ultimatum. There are a few nifty compositions (e.g., a reflection of Ben in a windshield) and some nicely-timed reaction shots of Riley and Ben’s dad. (Someday, I swear, I will blog about reaction shots, a key to Hollywood storytelling.) I liked the way that the slapped-together family of the first installment—Dad Ben, Mom Abigail, Riley the kid—is expanded to include the old folks. Of course I regard the rekindled affection between Ben’s father and mother as backup for my Grandparents-Grandkids Hypothesis.

Still, the sequel lacks the throwaway byplay between Ben and Riley and the clever misdirection of certain scenes, principally the extended heist at the National Archives reception. The plot is somewhat too stuffed with incident, jerking us abruptly from continent to continent. (Will American filmmakers please give up the informative title card “Paris, France”?) It seemed to me as well that Ben’s reasoning involved not so much high-context inferences as inspired guesswork. The contrived quarrel in Buckingham Palace between Ben and Abigail is nothing like as enjoyable as Ben’s snippy requests for silence after they’ve lifted the Declaration in NT 1. Sequels don’t have to be a step down from the original, as this entry [2] has argued at length, but alas NT 2 is.

Don’t, however, tell me that the thing is preposterous. Friend, the genre is built upon the preposterous. Preposterosity is its middle name. Jules Verne, H. G. Wells, and Edgar Rice Burroughs all spun their yarns out of hopelessly far-fetched premises. There is nothing as nutty in this franchise as the idea that Tarzan could teach himself to read. The task is always to make a crazy logic out of a farrago, and this the new installment does, skipping from pre-Columbian inscriptions to the idea that, as Riley phrases it, “Mount Rushmore was a coverup.” I buy that, and I completely buy the idea that our Chief Executives pass along a book recording all the Big Secrets in US history. The only item I couldn’t swallow was the prospect that America might elect a President who majored in architectural history.

Compensating for the feature’s drawbacks were the hors d’oeuvres at my screening. Now when we go to the multiplex we get Bonus Supplements, just like in the old days of trailers, shorts, and educational featurettes. My extras were a trailer for the upcoming Pixar release Wall*e, a trailer for the new Narnia installment (produced by our old compadre Mark Johnson), and even a Goofy cartoon, How to Hook Up Your Home Theater. Brainwashed by TV ads, the Goof races to the chain store Shiny $tuf to get his gigantoscreen and peripherals, under signs reading: “Obey—Buy!” At home, he has to sweep a faded pic of Uncle Walt off his sideboard to clear space for the new gear, which arrives in a blizzard of styrofoam peanuts. As fast as a Clampett and as silly as a classic Goofy, the cartoon includes his memorable “Wah-yoo-yah!” holler as he is launched into space.

How to Hook Up Your Home Theater even looked hand-drawn. If it’s on the Book of Secrets DVD, I’ll buy that disc. Hell, I probably will anyhow.

PS 7 January Thanks to Greg Thow for calling my attention to a nice background [3] interview on the making of the Goofy short.

PPS 8 January Thumbing through folders–real ones, made of manila–I find that agents [4] use National Treasure as the model of a “four-quadrants” movie. 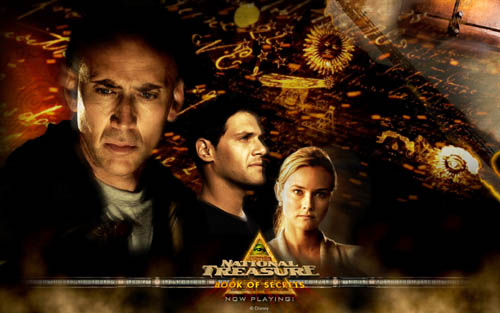