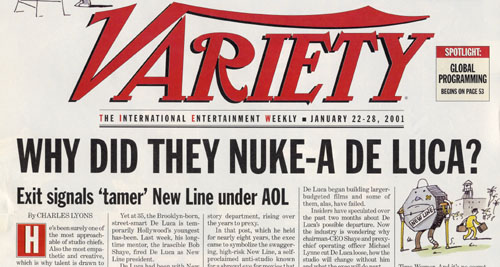 Today Anne Thompson’s blog contains a short entry [1] linking to an “acerbic Brit Blogger” who has objected to the language used in Variety. The writer in question is Ronald Bergan, whose title sums up his claim: “It’s time Variety started speaking English.” [2]

Bergan acknowledges that Variety is the best source of news on film, film festivals, and reviews. (The journal also covers TV and theater, as well as occasionally music and videogames.) But, he adds, “Pity then that it is unreadable.” Bergan attributes the cause to “Varietyese.” “Sticks Nix Hick Pix,” which he cites from the 1930s, is the sort of joke that has “now worn thin.”

Bergan also quotes a passage rife with what Variety itself terms “slanguage”: “The rookie self-distribbed indie pic, helmed and lensed by Alan Smithee, is geared for upscale fest auds and urban markets, particularly in Euro zones west and east. But the protags are too high-hat for wider BO appeal. Most perfs are boffo and tech contributions are on the money.” His opinion is that “This sort of writing not only degrades film criticism and demeans reviewers but debases the English language.”

Thompson, unfazed, responds, “I enjoy throwing around slanguage like prexy, helmer, boffo and pics with legs. They’re ingrained in my brain. What’s not to like?”

What, indeed? Anne, there’s plenty of mitting for your position, despite a few sour comments agreeing with Bergan that have been posted in response to your entry. As you point out, the heavier use of terms that might be unfamiliar to many comes in the print versions of Variety. The website, available to a broader public, tones them down distinctly. Given how much it costs to subscribe to the print edition, presumably mostly industry insiders (and some film historians) are reading it. Speaking as one who looks forward to the arrival of Variety every week and reads the film parts immediately, I enjoy its distinctive prose.

I occasionally run across a slanguage term I don’t recognize. Usually they’re pretty easy to figure out. As a hypothetical headline, “Thesp Ankles Ten-percenter” is a little odd, but couldn’t a reader figure out that an actor has left his or her agent? OK, it’s a little obscure, but I for one find it charming rather than annoying. And if I can’t figure a term out, I can check Variety‘s online slanguage dictionary [3].

Indeed, I’d like to suggest that slanguage is only one element in a Variety style. It’s partly the breezy tone, whether slanguage is employed or not. It’s most evident in the headlines, which can draw upon a number of devices. I can think of at least three. These examples come from the October 22-28, 2007 print edition.

There’s rhyming, as most famously represented by “Sticks Nix Hick Pix.” Most aren’t that spectacular, but there’s the subtler “Studios try slower pace to kudos race.” (That’s for one of Thompson’s own stories.)

There is insistent alliteration, which is a pretty common tactic. Three instances: “Super-size Skeins Shrink Skeds”; “Brooks Book is Biz’s Bible”; and “Claques Click with Canucks.”

Finally, there’s the pun on a familiar title or phrase: “Puttin’ on the Snits.”

These are all fairly ordinary Varietyese. I wish I could remember some of the past titles that have made me laugh out loud. Glancing through my files, I could only find one of those, on a story concerning studio head Michael De Luca’s abrupt departure from New Line Cinema in early 2001 (above).

Dignified? No, but Variety covers the entertainment industries, and why should it not take on a little of the spirit of its subject?

When I was writing The Frodo Franchise, I wanted to make its style appealing. I wanted it to be clear that it wasn’t just an academic tome but one aimed at the general reader—especially fans of the Lord of the Rings trilogy. Of course there are the standard tricks, such as starting chapters with an intriguing anecdote or with a surprising fact. It occurred to me that maybe I could lighten the tone with some amusing titles for the chapters and their subsections. What better model to follow than Variety?

I began to appreciate the challenges a Variety title-writer must face. In some cases I came up with some decent ones, falling into the three types I listed above—not that I thought about the categories while waiting for inspiration to strike. I’ve read the trades long enough to know what an authentic Varietyese title sounds like.

Rhyme: “Last Ditch for PJ Pitch” for the section where I talk about Peter Jackson’s presentation of his project to New Line head Bob Shaye.

Alliteration: The book title itself, and the chapter “Flying Billboards and FAQs.”

Puns on familiar phrases: “In the Darkness Spellbind Them,” on the release and success of the films, and my personal favorite, “Zaentz and Zaentz-ability,” on Miramax’s negotiations with producer Saul Zaentz for the Rings production rights. A zinger of a Variety headline should make you groan at the silliness and yet at the same time shake your head with admiration.

But I couldn’t think of such “headline” titles for every chapter and subsection. Many of them ended up being just plain and descriptive. Still, I tried in every case. It was fun.

That brings us back to the Bergan blog entry. He seems to believe that Variety’s writers are forced to write such stuff by their employers and ends his entry by urging them to “go on strike for more textual flexibility. I can see the headline now: Hax Nix Variety Lingo.”

The author presumably thinks that that headline typifies Varietyese, but it really doesn’t. It has no rhyme, no alliteration, no pun, and no slanguage words. Bergan just made up “hax” to echo the “Sticks” title quoted above. (Pretty insulting to Variety scribes, too.) I’ll never be good enough or quick enough at this to get a job at Variety. Still, I offer the title of this entry as more in the magazine’s true spirit.