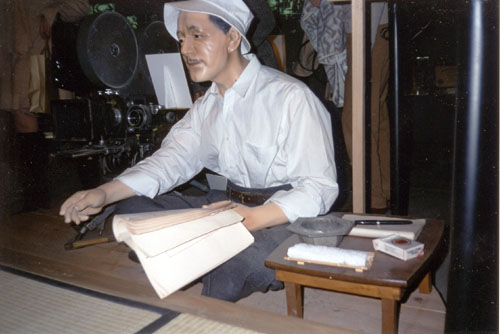 I owe you a final report on my viewings in Vancouver, but while I’m preparing that, I want to signal three publications, two printed books and one online book.

America seems to have cornered the market in branded entertainment. Movies and comics have given us Mickey Mouse, Shrek, Barney the dinosaur, Batman, Jughead, and all those other lovable characters you can’t escape. Once in a while another country gets into the game, as with Tintin (Belgium), the Smurfs (Belgium), and the Teletubbies (Britain). But for sheer numbers, the US’s only real rival, it seems, is Japan.

The cliché is that the Japanese make the hardware and we make the software. But Astro Boy (originally Mighty Atom), Speed Racer, Mighty Morphin Power Rangers, Sailor Moon, Pokémon, Cutie Honey, and Super Mario Brothers beg to differ. And if Zatoichi and Godzilla add their weight to the argument, you’ll back off fast. The Japanese have given the world an unending spate of sagas and characters, often of marked peculiarity. Ranma ½ changes from a boy to a girl and back again, and Mothra, even just being himself, is fairly creepy. 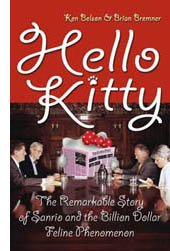 All of which makes Ken Belson and Brian Bremner’s Hello Kitty: The Remarkable Story of Sanrio and the Billion Dollar Feline Phenomenon (Wiley) an informative study and a breezy read. The pudgy cat with no mouth generates about $500 million in annual sales, half of Sanrio’s total, and she adorns over 20,000 products, including vibrators [1].

Belson and Bremner trace Ms. Kitty’s rise from humble beginnings in 1974 to her current status as a media superstar. Just as important, they put her in several intriguing contexts. They trace the rise of the kawaii [2] (cuteness) sensibility throughout Asia, where Peanuts‘ Snoopy became the model. They show that Miss Kitty is emblematic of Japan’s shift from “hard” manufacturing industries to “soft” culture-based ones like comics and videogames. Some consumers, though, choke on all this sugar, and the authors haven’t omitted mention of those media jammers who want to turn our heroine into a hellcat.

The book is especially good at characterizing the distinctive Japanese belief that a product must arouse an emotional attachment in the consumer. Sony does it through sleek design, Tamagotchi the digital pet did it through guilt-tripping. Ms. Kitty might seem the epitome of blandness, her awww quotient and neoteny [3]-driven features rendering her vacuous. Yet the lady has a touch of mystery. You’ve seen a smile without a cat, but here is a cat without a smile. Snoopy shamelessly exposes his fantasy life, but who knows what she’s feeling? Lust? Caution? Is she quietly judging us? Fill in the blank. 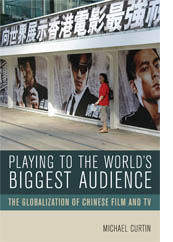 For a more comprehensive analysis of how Asian media empires work, go to Michael Curtin’s brand-new Playing to the World’s Biggest Audience: The Globalization of Chinese Film and TV [4] (University of California Press). Michael is a close friend and colleague, so in principle I’m biased; but I’d think this a terrific book if he were a stranger. Among many other things, it shows that media globalization isn’t a one-way flow, from Hollywood to ROTW (Rest of the World). Asian media are globalizing too, and the process is both fascinating and far-reaching.

The book provides both history and contemporary analysis. Michael shows that Shaw Bros. pioneered the concept of an entertainment conglomerate in Asia, and he traces their policies across several decades. The story starts in Hong Kong, with its curiously transnational film industry, but the tale sweeps across media (TV, telephony, internets) and territories: Taiwan, Singapore, and mainland China. Michael has interviewed many major players, so if you want to know what’s really behind Golden Harvest, Media Asia, China Star, Star TV, Celestial, and other companies, this is the place to go. In the area I know a little, Michael offers the shrewdest and strongest analysis of the rise and precipitous fall of the Hong Kong film industry I’ve seen.

Playing to the World’s Biggest Audience will attract scholars and business people wanting to understand the dynamics of Asian media. I think as well that fans of Asian film, music, and TV can get a lot out of it. If you’re put off by the first chapter’s theoretical layout, skip to chapter two and jump into the compelling story of how entrepreneurs from southern China assembled a media juggernaut that now enthralls over a billion spectators.

Finally, about a year ago on this blog I wrote an entry [5] about the online arrival of my Ozu and the Poetics of Cinema, thanks to the publishing initiative of the Center for Japanese Studies at the University of Michigan. Now an improved online edition of this scarce out-of-print book has just gone online [6]. You can download the whole shebang if you want.

In the first version, posted a year ago, the pictures were hard to see, so we made digital versions of all the original stills. The monochrome ones look very nice, and the color ones (not an option for the print edition) look fine. In addition, if you click on a still in the sidebar, you can enlarge it and even download it. Thanks to web tsarina Meg Hamel, we have a permanent link in the list of books on the left.

There’s also a new introduction [7], in which I explain a bit about the background of the book, talk about the approach it takes, position it within trends of film studies, and suggest what Ozu means to me. My introduction also shows some rare pictures, including snaps from a strange exhibition about Ozu’s life. The exhibition has vanished now, but maybe that’s an appropriate tribute to an artist who made mutability everlastingly vivid.

A toast to Markus Nornes, Bruce Willoughby, Kristi Gehring, Terry Geitgey, and all the other people who took pains to make this improved online Ozu possible. 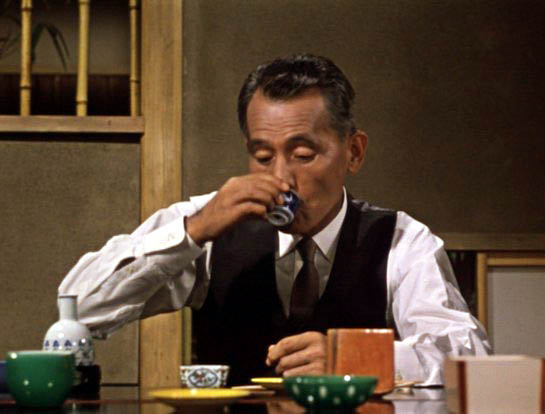