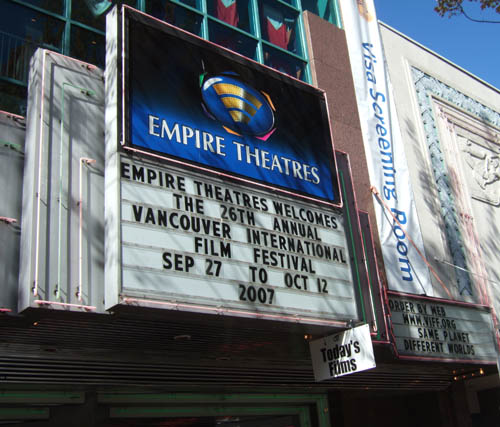 I sang the praises of the Vancouver International Film Festival in my first venture into blogging a year ago, so it’s a pleasure to report that this year’s event is no less captivating. Too many movies to take in, natch, so I’ll concentrate on two of the fest’s great strengths, documentaries and Asian films (programmed this year by both Tony Rayns and Shelly Kraicer). Top and bottom of today’s entry: glimpses of the two venues where I spend the most time: the Empire Granville 7 multiplex and the Pacific Cinémathèque a couple of blocks away, the latter offering ambitious programming to gladden the heart of any cinephile. 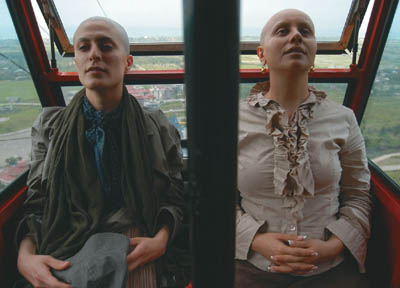 10 + 4 (Iran) provides vignettes of Mania Akbari’s struggle to live with cancer therapy. The fact that she’s also the filmmaker, and that she starts, at Kiarostami’s suggestion, from the visual premise of 10, gives the film extra layers of interest. In fewer than seventy shots, most from within moving vehicles, the film presents a series of dialogues, usually between only two people. Since most major action takes place elsewhere, we watch and listen for signs of characters’ pasts, their relationships, and their states of mind.

We can trace Akbari’s development from cheery pride, going to parties despite her chemotherapy (“Every morning I thank God for make-up”), to anguish as the pain mounts and the treatments intensify. No viewer will forget the scene on a cablecar when she and Behnaz, from 10, reveal their different responses to their illness, and offscreen, examine each others’ mastectomies. In a final scene, Akbari, her hair now regrown, is confronted by another woman who warns her of using cancer as a weapon. The final words, heard under the credits—”I am using it, and I can’t give up the joy of this game”—reveal a psychological insight we rarely find in discussions of the social implications of illness.

Oatmeal-video visuals shot handheld and often out of focus, talking heads, dicey sound, overbusy editing—never mind. My Kid Could Paint That shows that we’ll forgive all sorts of technical faults if the subject, story, and ideas are gripping. 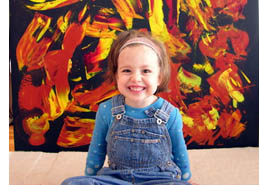 At one level, Amir Bar-Lev’s film simply traces how four-year-old Marla Olmsted was catapulted to celebrity when her dribbly paintings became collector’s items. Bar-Lev was lucky enough to be around Binghamton from more or less the start of her strange adventure, and he gained the family’s confidence. Soon enough, though, Bar-Lev is asking exactly how these paintings could wriggle into the artworld.

It’s partly because, he shows, experts are pretty evasive when it comes to explaining how to tell good abstract painting from bad. Can’t you tell just by looking, as we can when we appreciate the figurative work of old and new masters? Turns out it’s not so easy. Critic Michael Kimmelman suggests, somewhat vaguely, that even abstract art is about a “story”—if not in the picture, behind the picture. Marla, of course provides a great story, but the question of how to judge her oeuvre remains.

We might insist that an artwork’s goodness is intrinsic, regardless of the circumstances of its making. If we learned on good evidence an eighty-year old woman had composed The Marriage of Figaro, surely it wouldn’t lose its sublimity. But philosophers Arthur Danto and Denis Dutton have suggested that our information about how an artwork came to be is usually relevant to interpreting and judging it. Sure enough, collectors rhapsodized about the work when they thought Marla had done it, but they cooled after a 60 Minutes story suggested that the father had coached her, and perhaps even finished the pieces himself.

That raises another issue, encapsulated by a Binghamton journalist. She explains that if a story is to run long in the media, it has to be given steep ups and downs. Hyped at the start, Marla’s paintings are suddenly called con jobs, and even Bar-Lev starts to get doubtful. How the family tries to regain their credibility, and how Bar-Lev exposes his own hesitations and complicities, makes for a fascinating film.

My Kid Could Paint That touches on other matters, such as the world’s love of a prodigy, the money that drives the gallery scene, and the issue of how much craft, such as skill in drawing, we now demand of our artists. What shines through the intellectual issues is a childhood joy in picture-making. As portrayed here, Marla remains a kid, and she reminds us of the pleasure in gooping up a surface with our fingers. Sony Pictures Classics made a wise move in acquiring this engrossing movie. 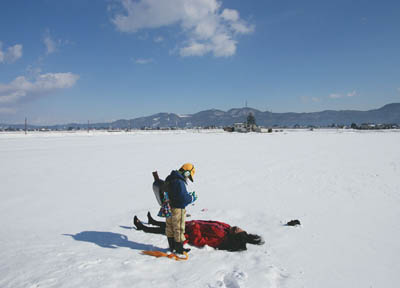 I try mostly to blog about films I like, passing over the others in silence. Hammer jobs are fun to write and to read, and I confess to having indulged in a couple when I felt that historical or stylistic analysis could cast light on current films that were being overpraised for originality. By and large, though, I prefer what Cahiers du cinéma called the criticism of enthusiasm. Everyone should write about the films she admires, and let history sort them out.

But my admiration for Kitano Takeshi has been so great since I saw Sonatine back in the 1990s that I can’t let Glory to the Filmmaker! pass without a little comment. His previous foray into fake autobiography, Takeshis’, seemed to me pleasant enough in a casual way. Unless I’m missing something, however, Glory to the Filmmaker! is an unmitigated embarrassment. Gone are the surprising compositions and subtly daring cuts; gone too the elliptical narrative that has time for adolescent digressons. Glory! is nothing but adolescent digressions, sketches and skits that either cling to an unfunny premise, like the dummy Kitano that pops up now and then, or abandon their premises halfway through. The pastiches of Ozu and Kurosawa are slapdash and inexact, while the more purely Kitanoesque stretches work at very low wattage.

Kitano is such an important filmmaker that you can’t ignore even something as offhand as this, but we have to hope for more.

Ten Nights of Dreams, a portmanteau feature based on stories by Soseki Natsume, is as uneven as these affairs usually are. The first chapter, a lovely episode by Jissoji Akio, is eerie in a subdued way, with some quietly canted compositions and some cutting reminiscent of the great Page of Madness. I also enjoyed Ichikawa Kon’s entry, a sober monochrome exercise. Most of the others, however, rely on turbocharged CGI and frantic grotesquerie—all justified by the indulgent premise that dreams are really, really weird.

Yamashita Nobohiro’s Matsugane Potshot Affair (2006), however, bowled right down my center lane. A crooked couple comes to a small town and their search for stolen bullion becomes one thread in a tangle of dysfunctional families and grubby sex. My last sentence does the film an injustice, though, because the laconic narration fills in the circumstances and backstory at such a leisurely pace that all your attention is on the grim comic byplay and furtive eroticism of the townfolk. Any movie that starts with a little boy feeling up what appears to be a woman’s corpse on a frozen lake signals its tone pretty straightforwardly.

As in Linda Linda Linda, the only other Yamashita I’ve seen (and mentioned here [1]), the staging and shooting are quietly commanding. The shots average about 23 seconds, but they seem longer because the camera almost never moves. Lovely long takes with layers of depth and pockets of action captured in windows and paper doorways recall the great Japanese tradition of all-over composition. Yamashita provides several shots that could be filed in my gallery of funny framings [2]. When you film this way, you have to know exactly where to put the camera, and several scenes—notably a confrontation among the thieves and the twin brothers—quicken areas of the frame we never normally notice. Movies like this remind you of the pleasure of having time to see everything.

I haven’t yet mentioned the film I enjoyed most, Jiang Wen’s The Sun Also Rises, and today I’m also seeing the new Suo (I Just Didn’t Do It) and some other enticing items. So I turn Chinese, and Japanese again, in my next entry.

For more blogs anchored to the festival offerings, go here [3]. 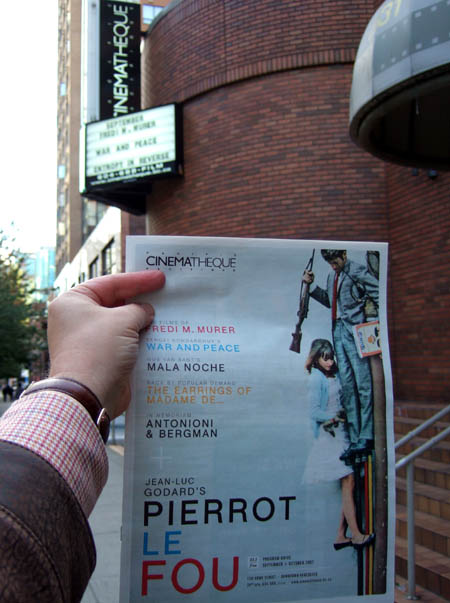