Filming The Da Vinci Code in the Louvre.

In the 8th edition of Film Art: An Introduction, we added a feature, “Recommended DVD Supplements.” Most chapters end with one of these, which contains information about relevant supplements that might be useful to teachers and students. Filmgoers outside the classroom might find them helpful as well.

As we all know too well, many DVD supplements consist largely of interviews with the main cast and crew members in which they praise each other. (“I don’t know how we could have made this movie without _______. She was perfect for that part.” “We were lucky to be working with a director who’s a genius.”) Not very interesting. We try to sort through and find supplements where the filmmakers actually talk in an informative and entertaining way about how they went about their work.

Obviously many DVDs have come out since we finished our last round of revisions, so we plan to use this blog as a means of occasionally updating our recommendations. Your suggestions about especially informative supplements are welcome.

In Film Art 8, I recommended the Production Diaries Peter Jackson put together for King Kong, since they cover (albeit briefly) a lot of topics that few supplements tackle. One day’s diary entry is devoted entirely to clapperboards! In the extended King Kong DVD, some of the additional supplements also deal with topics that most DVD’s extras bypass. 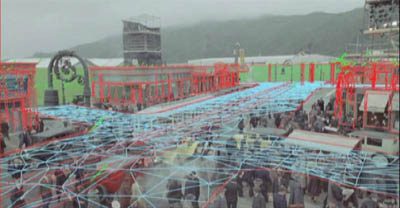 In relation to the section on settings in the Mise-en-scene chapter, for instance, you might look at “New York, New Zealand” (23 minutes). While most descriptions of CGI talk about how it is used to make monsters or crowds, this supplement discusses how the creation of settings can depend on digital imagery (above). During the fairly lengthy (42 minutes) documentary, “Pre-Production: The Return of Kong,” there is a discussion of what a First Assistant Director does during during this phase of production (40 minutes in). How often do you run across that? It could be used in conjunction with our layout of production roles in Chapter 1.

The 30-minute “Return to Skull Island” section goes into miniatures, matte paintings, and green-screen work—things that are often featured in supplements. This one also covers a less familiar technology, digital doubles.

Supplements that examine a single scene, technique by technique, are pretty rare. One of the supplements on the Far from Heaven DVD does so in a useful way. The track originated as a documentary, “Anatomy of a Scene,” produced by the Sundance Channel (27 minutes). The analysis covers the production design and costumes, cinematography, acting, editing, and music. At the end, the completed scene is shown. The other large supplement on the disc, “The Making of Far from Heaven,” discusses the filmmakers’ attempts to replicate a 1950s look. It’s rather bland, with a little on style, a little on ideology, and a lot of mutual praise.

The Da Vinci Code [3](Sony; all editions have the supplements)

The DVD of The Da Vinci Code has two useful supplements. “Magical Places” (16 minutes) is an excellent demonstration on the logistics of going on location: permissions needed, technical challenges (such as lighting real interiors), and the substitution of one real building for another. Students will gain an awareness that even in real locales, filming doesn’t mean just going out, aiming a camera, and shooting stuff. 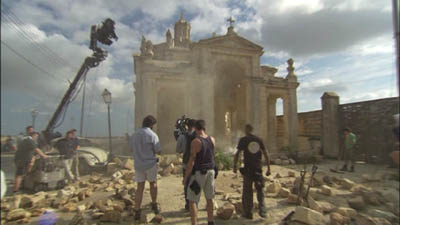 The second, “Filmmakers’ Journey Part One” (24.5 minutes) is not as good but still interesting. It could be used in conjunction with our Chapter 3, “Narrative as a Formal System,” which is rather hard to find relevant supplements for. There is discussion of character, timing, and rhythm. One passage that is particularly good for showing how filmmakers think about the form of films comes in a segment on the introduction of a major new character (Sir Lee Teabing) fully halfway through the film. Moreover, as director Ron Howard says, the Chateau Villette scene in question is a “high-wire act,” with a great deal of exposition suddenly brought into the middle of what has largely been an action-filled chase film. There is also discussion of the film’s series of journeys: “There was this sort of classic structure that we were working with.” It’s a pattern we discuss in Chapter 3. If nothing else, this supplement might convince students that their textbook’s authors are not just making up these terms to bedevil them!

Unexpectedly, one of the best sets of supplements I’ve seen lately accompanies Pirates of the Caribbean: Dead Man’s Chest. It’s a film that I mildly enjoyed watching, but I liked the making-of documentaries more. For one thing, the style is unusually low-key and lacks the chat about how wonderful everyone and everything was.

“Charting the Return” (about 26 minutes), for example, follows the stages of pre-production not just through interviews but also via a fly-on-the-wall presence of the camera at meetings and discussions. Often the people onscreen are not being interviewed but are actually at work, talking to each other. We see scripting, location scouting, design, and scheduling. Problems with deadlines and budgets are discussed rather than glossed over. The candor makes for a surprisingly entertaining and informative little movie. The same is true for “According to Plan” (60 minutes), which covers principal photography. Crew members delight in the beautiful Caribbean locales–but also complain about the heat, humidity, tides, rocking boats, and roads too small for equipment trucks. It’s one of the few accounts I’ve seen that suggests both the joys and the frustrations of real filmmaking.

Unless you’re really, really interested in costuming—or in ogling Jack Sparrow—the “Captain Jack: From Head to Toe” is frivolous. The “Mastering the Blade” segment can be skipped as well.

“Meet Davy Jones” (about 12 minutes) describes an important development in motion-capture technology for creating CGI characters. “Image-based motion capture” can extract mocap markers from a two-dimensional image (e.g., a shot of an actor performing on a stage) and make it three-dimensional. It can then be manipulated and placed back in the shot. In a discussion of modern special effects, this supplement might usefully be compared with the ones about the creation of Gollum in the Lord of the Rings: The Two Towers extended DVD set. The “Creating the Kraken” film (10 minutes) explains well how practical and CG special-effects are blended. 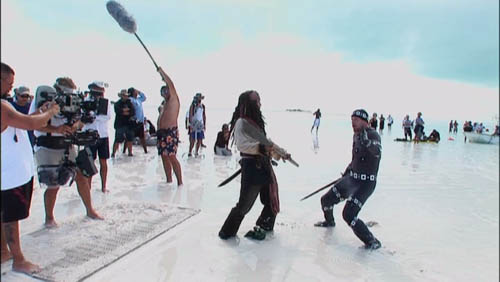 Filming as the tide covers the island used as a location.

You can skip the “Fly on the Set: The Bone Cage” segment, which is a skimpy four minutes on blue-screen special effects and the use of multiple cameras. OK, but this topic is covered more thoroughly on other films’ supplementary discs. Beware of “Jerry Bruckheimer: A Producer’s Photo Diary.” Bruckheimer makes up for all the compliments to director, cast and crew that were left out of the other supplements in this mercifully brief (5 minutes) track.

Unfortunately, some of the best recent films have come out on DVD with no supplements to speak of. When will we see some extras-laden editions of Cars and Zodiac?

[September 24: Film critic Kent Jones tells us that a deluxe DVD edition of Zodiac is coming out in the near future.]