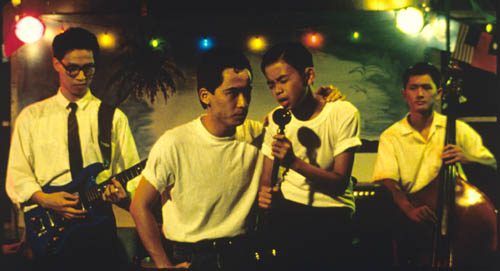 This summer two major figures in Chinese filmmaking died. One was Edward Yang (Yang Dechang), one of Taiwan’s finest directors, who died on 29 June. But before I pay tribute to him, I want to acknowledge another figure who had a great impact on Asian cinema. 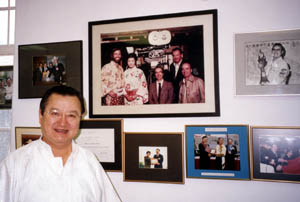 Charles Wang [1] died on 6 July. Along with his brother Fred, Dr. Wang ran Salon Films [2], the major supplier of film equipment for Hong Kong and a principal one for East Asia and the Pacific Rim. Charles graduated with a degree in chemistry before inheriting the business from his father. As Hong Kong filmmaking grew in sophistication, Salon grew along with it. Most Hong Kong films bear the firm’s brand in their end credits. 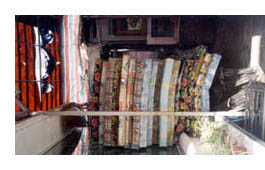 [3]Since 1969 Salon has provided top-flight cameras, lenses, lighting gear and other technical support for both local and visiting productions, such as Mission: Impossible III‘s Shanghai shoot. An early triumph was winning the Panavision franchise for the region. The company even supplies trampolines and landing cushions for martial acrobatics, as this glimpse inside a Salon van shows.

When I interviewed Dr. Wang in 2003 he kindly gave me information about the company and the development of film technology in Hong Kong. He showed me his many awards and talked enthusiastically about Salon’s new efforts to assist mainland moviemaking. In recent years, Salon was investing in films such as Zhang Yimou’s Hero. Like most Hong Kong film people, he was very accessible and generous; he even gave me a lift back to my hotel. Charles Wang was a major force in the Hong Kong industry and will certainly be missed. 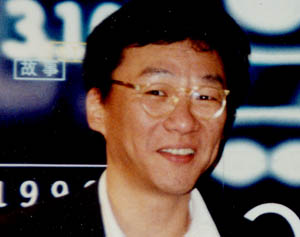 I met Edward Yang twice. First, at a Hong Kong Film Festival reception, we chatted about his film Mahjong (1996), which had screened. I got to know him a little better in fall of 1997, when we were both invited to the Kyoto Film Festival. We ate and watched films together, and we shared baby-boomer nostalgia; it turns out that he and I (and Hou Hsiao-hsien) were all born in the same year.

I found him friendly, thoughtful, and open to appreciating all film traditions. He spoke of enjoying Japanese swordplay movies in his youth, and he admired American films for their gripping stories. Still, his preference for ellipsis and understatement came through. When we met Kitano Takeshi for dinner, Edward praised a crisp transition in Sonatine: to show the gang going from Tokyo to Okinawa, Kitano simply gives us a quick pan of the sky accompanied by the sound of a jet plane.

Yang was an accomplished cartoonist, and I thought that this background partly explained his early style, on display in the short film Desires (1982) and in the features That Day, on the Beach (1983), Taipei Story (1985), and The Terrorizers (1986). In these films Yang often breaks his scenes into simple but striking fragments. After the police shootout in The Terrorizers—one of the most enigmatic and elliptical opening sequences in modern cinema—the Eurasian girl staggers out to the street. Yang gives us her collapse in quite abstract, percussive images. Her foot hits the pavement. Cut. She takes a step and falls out of frame; the camera holds on the empty frame. Cut. She’s lying on the crosswalk. I imagine these as forceful, laconic comic-book panels.

With A Brighter Summer Day (1991), my favorite of his works, Yang tells another gap-filled story but treats the scenes in long, distant, often decentered takes reminiscent of Hou. Now his frames are more dense with figures and furniture, and layers of action extend quite far back. In Figures Traced in Light, I devote a little—too little—analysis to one admirably staged passage. Another of my favorite scenes in A Brighter Summer Day shows the hero Xiao S’ir developing a romantic attachment to Ming, the girlfriend of the absent gang leader Honey. They sit in a brightly decorated café.

Suddenly Ming darts out of the shot, leaving Xiao S’ir and the other boys staring. From their point of view we see that Honey, dressed in a sailor suit, has returned and Ming has gone to meet him.

Yang cuts back to the boys as Honey’s gang starts to threaten Xiao S’ir. Abruptly, Ming runs into the shot, past the boys, down the long central aisle, and out of the café. (In a 35mm print you can see her pausing and lingering outdoors.)

The group closes around Xiao S’ir; only Honey’s entry breaks the tension. He leads the boy into the depth of the shot, the camera following them.

Honey warns Xiao S’ir off, and our hero goes outside, mimicking the path Ming had followed.

As Honey turns his attention to his gang and an upcoming skirmish with their rivals, he moves back down the aisle, the camera backing up. Once his business is done, Honey drifts back to the rear door.

Honey pauses far from us, at the window. Yang cuts to show what he sees: Xiao S’ir, in flagrant violation of the warning, talking to Ming outside.

First we got Xiao S’ir’s point of view on Honey and Ming; now, in a reversal, we get Honey’s point of view on Ming and Xiao S’ir. In scenes like this, Yang merges his developing skills in long-take staging with cuts that develop not only the action but story parallels. Very distant framings, characters moving to the rear of the shot and turning their backs: Yang “dedramatizes” the scene. Further, by shifting point of view, he leaves us guessing about story information: What led to Ming’s running away from Honey? What are Xiao S’ir and Ming talking about now? Yang created a laconic visual approach that, I’d argue, invests fairly standard dramatic situations with a tantalizing uncertainty.

Yang’s best-known film is, of course, Yi Yi (2000), and it won him the wide appreciation that he had long deserved. It’s a warm and gentle work, less innovative than his earlier efforts but utterly typical of his vision of lives pervaded by melancholy routine and abrupt disappointment. People often remarked that the adolescent hero of A Brighter Summer Day resembled Edward himself. Perhaps too in Yi Yi Yang’s enigmatic pictorialism is echoed in the idea of a little boy who makes photographs of people’s heads seen from the rear. Like the director, the boy (named Yang-yang) displays a reticence that respects the mysteries of people’s private lives.

We already have a very useful guide to Yang’s work in one chapter of Emilie Yueh-Yu Yeh and Darrell William Davis’ book, Taiwan Film Directors [4]. And Criterion’s Curtis Tsui has done a wonderful edition of Yi Yi [5], as Brian Hu shows here [6]. We must hope that Criterion, Eureka, or another gilt-edged DVD publisher will soon bring us Yang’s other works in the pristine editions they deserve.

In 1998, when we screened A Brighter Summer Day at our Cinémathèque, I wrote a program note. I reproduce it, lightly revised, as a quick pointer to one of the great films of the 1990s.

With Taipei Story (1985) and The Terrorizers (1986) Edward Yang established himself as one of the two leaders of the Taiwanese New Wave generation. At first it seemed that he and Hou Hsiao-hsien had agreed to a division of labor in their subjects and styles. Hou tended to concentrate on life in the countryside, or on rural characters transplanted, bewilderingly, to the modern city. Hou was also deeply interested in the history of Taiwan; his most acclaimed film, City of Sadness (1989), is a panoramic survey of Taiwanese society immediately after World War II. Hou’s tranquil style favored a contemplative mood and muted emotion.

Yang, by contrast, tended to focus on the lives of well-to-do urbanites in a contemporary setting, Taiwanese yuppies plagued by anomie and the desperation of love and work. His elliptical editing technique, reminiscent of Resnais, fractured time and space, while his compositions had a painterly starkness. The Terrorizers shuttles kaleidoscopically among characters at its beginning; their relations only gradually settle into intelligible patterns. Whereas Hou tended toward nuance and quiet drama, Yang was unafraid of shocking, inexplicable bursts of bloodshed.

Now it seems evident that this impression of a division of labor was somewhat schematic. Hou’s range of interests has widened, with new emphasis on the violent world of urban crime (Goodbye South Goodbye, 1996), and he has come to rely on quite disorienting transitions between past and present (Good Men, Good Women, 1995). Likewise, with A Brighter Summer Day Yang turned to history and cultivated a more sober style of filming, with lengthier shots and a fixed or barely moving camera. This approach throws down a challenge to the razzle-dazzle of contemporary popular cinema—from Hollywood, Hong Kong, and even the American “independents”—and invites us to scrutinize, moment by moment, the details of action unfolding on the screen.

Three years in the making, A Brighter Summer Day was a triumph of independent production. At a period when the Taiwanese film industry was virtually dead, Yang found money (mostly Japanese) to mount a project of remarkable ambition. Over half the cast and crew had never worked on a film before. At first released in a three-hour version, the film was re-released in a four-hour director’s cut, and this has become the standard version.

The historical event examined in A Brighter Summer Day took place in Taipei in the 1960s, when an adolescent boy about Yang’s age stabbed a young woman. At epic length Yang creates a web of circumstances around the event. He shows the interplay of traditional culture—filial duty, education as an ideal of social advancement—with popular culture, especially the rock n’ roll songs that recur throughout. Yang has said that Americans might not realize the shattering force of rock in other cultures: “These songs made us think of freedom.”

The film has over eighty speaking parts, most filled by nonactors, and it intertwines several characters’ destinies. On first viewing, the film can be somewhat bewildering to a non-Taiwanese audience, so a plot sketch may help. (Skip to the next paragraph if you don’t want to know the action in advance.) At the center is fourteen-year-old Xiao Si’r. He tries to be a dutiful student, but with his friends Cat and Airplane, he lives on the fringes of the Little Park gang of teenage thugs. When Xiao Si’r reports seeing a gang member with another boy’s girlfriend, he triggers a power struggle in the gang. As his friends fall by the wayside and rival gangs fight for control of local turf, Xiao S’ir becomes involved with Ming, a girl who’s attached to Honey, exiled leader of the Little Park gang. A major climax occurs during a gang rumble at a rock n’ roll concert. Interwoven with the juvenile intrigues are political matters; the police pursue and question Xiao S’ir’s father about his Communist friends. Xiao S’ir becomes friendly with Ma, a general’s son, before they start to compete for Ming’s favor. The rivalries build to a tense schoolroom confrontation and a tragic finale in the park. In the final scene and over the credits, a radio transmission broadcasts the names of the students who have passed their school entrance exams.

The plot is even more intricate than my bare-bones summary can indicate; I haven’t discussed the boys’ adventures in a film studio or Cat’s singing career or the slender line of action involving Xiao S’ir’s sister. The breadth of action is extraordinary, and a sense of the contradictory pulls of daily life emerges steadily. No less demanding is Yang’s style—scenes played in darkness, few close-ups, with medium-shots and long-shots keeping us at a distance from the characters. But the result is a dispassionate look at teenaged passions, a deromanticized treatment of young people growing up in a repressive milieu. A Brighter Summer Day (the English title comes from Elvis Presley’s “Are You Lonesome Tonight?”) is an elegy to the ideals and mistakes of youth, an analysis of the vanities of the male ego, and a view of a generation painfully facing the limitations of tradition, the constraints of political oppression, and the demands of the modern world. 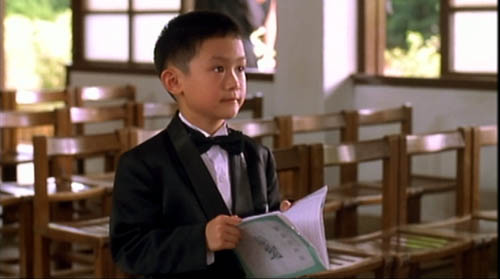