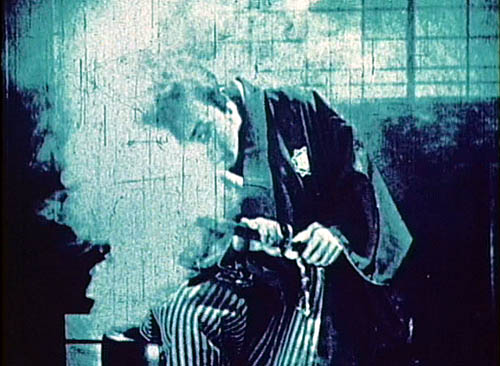 The Matsuda Eigasha [1] company of Tokyo deserves enormous credit for restoring and making available classic Japanese films. My first visit to the firm twenty years ago was a revelation. Matsuda Shinsui [2] was a former benshi, or spoken-word film accompanist, and he and his sons were collecting old films so that he could accompany them in screenings. A great many of the films were chambara, or swordfight movies. Most survived only in fragments, but what tantalizing fragments they were! (1)

The company made several of the films available on VHS tape [3], accompanied by benshi commentary prepared by Mr. Matsuda. I came away with several of these treasures. On later visits I was able to watch some films that hadn’t been transferred to video, and several of those deserve to be more widely seen.

When Mr. Matsuda’s son kindly drove me to my train station, I noticed that his car had a VHS player and video monitor installed in the dashboard. So much for my Tokyo-ga [4] experience.

[5]In 1979 Matsuda Eigasha compiled a documentary on the swordplay star Bando Tomasaburo. Now Digital Meme [6] has made it available on DVD, complete with English subtitles. Bantsuma: The Life of Tomasaburo Bando is obligatory viewing for everyone interested in Japanese cinema. Not only does it handily trace Bando’s remarkable career through stills, interviews, and surviving footage. It also supports something I’ve tried to show for some time: that the Japanese action cinema of the 1920s and 1930s was one of the most powerful and creative trends in world filmmaking.

Some writers have thought that Japanese filmmakers were developing a culturally anchored approach to filmic storytelling independent of Western influences. But in Ozu and the Poetics of Cinema [7] and two essays in my forthcoming Poetics of Cinema [8], I argue something different. By the early 1920s Japanese filmmakers had mastered Hollywood’s norms of visual storytelling. In the Matsuda documentary, this is evident from the clips from early Bando films like Gyakuryu (1924) and Kageboshi (1924). Long shots are broken up into closer views, and conversations are treated in reverse-angle shots of speaker and listener. Camera movements follow the characters as they walk or run.

So far, so conventional. But many Japanese filmmakers revised the American approach, turning it into something more expressive and experimental. So, for example, a very steep high angle in Kirarazaka (1925) serves at first to show us that Bando is surrounded by fighters who use ladders to try to trap him. As the scene returns to this framing again and again, it becomes more abstract, with the fallen ladders becoming vectors of a geometrical shot design targeting the hero. 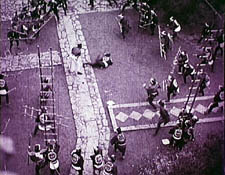 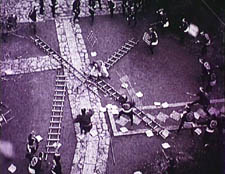 An even more remarkable example is Orochi (1925), a Bando film that survives intact and in fine shape. (Matsuda released it on VHS; I don’t think it’s on DVD yet.) The clip in the 1979 documentary shows one of Orochi‘s most dazzling passages. The hero, played by Bando, fights his way through a town, and, backed up against a wall, he’s trapped on all sides by his opponents. An extreme long-shot (below) shows us the situation, with Bando in the distant center. Many shots break this space down into opposing forces, Bando versus his adversaries, and quite fast cutting shows the men on either side of him.

The stretch that interests me most begins with a shot of Bando looking left. 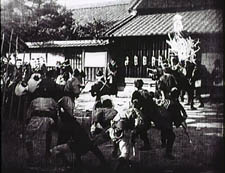 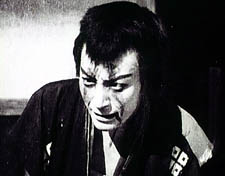 The director Futagawa Buntaro then breaks the confrontation into separate shots of the other swordsmen. Nothing unusual about that. But most directors would have handled the next few shots of the standoff this way:

This way we’d get a clear, simple sense of the fact that he’s surrounded on all sides. Instead, Futagawa follows the shot of Bando looking left with no fewer than twelve very close shots of fighters, all looking rightward. For example: 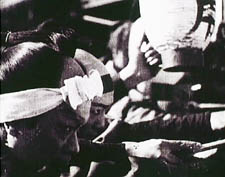 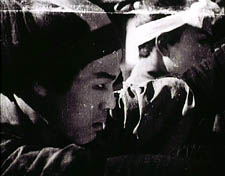 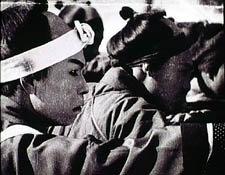 Then we get six shots of their arms outthrust, as here: 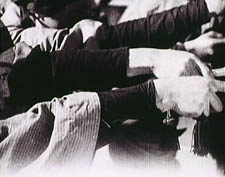 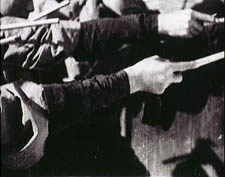 We then get a shot of several men looking straight to the camera, as if they represent the group directly in front of Bando, no longer at the left. Next there appear another ten shots of fighters looking leftward at Bando, all of them quite close to the camera. For example: 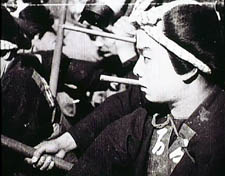 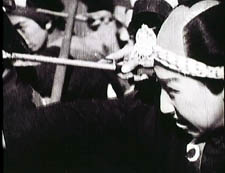 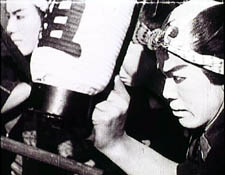 In both sets of shots, many images are composed to match each other graphically: the first group of faces tends to place each man on the left frame edge, while the second set puts most men at the far right. The first set of shots develops a pattern, moving from tight facial close-ups to shots of arms and swords thrusting toward Bando. The second set develops toward showing faces that are ever more cut off by the right frame edge.

Add in the fact that all these shots are cut very quickly, ranging from four frames down to one! This is extraordinarily rare in 1925 cinema. (I talk more about how to study such passages in an earlier blog [9].) Words can’t really convey the way these images clatter against one another. Their percussive speed makes them graspable only as a tense thrust in one direction countered by an equally tense one opposite. Faces pile frantically up against Bando first one one side, then the other. The sense of linear force is strengthened by the shift from the cluster of face shots to that of the arms, with the transition handled in a pair of weird jump cuts along different men’s arms. 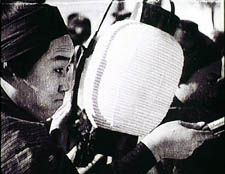 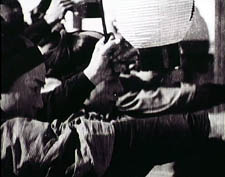 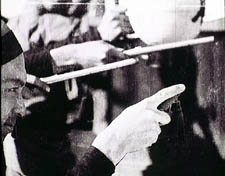 The transition from the first shot above to the second creates the impression that the man has jabbed with his spear, while the cut from the second to the third shot eases us to the forearm shots shown earlier.

This bravura passage is triggered by the initial shot of Bando, haggard and shaky. Perhaps the cascade of shots is motivated as subjective, reflecting his exhaustion in the face of entrapment. Just as likely, I’d say, is the fact that Futagawa took a stereotyped situation, the hero surrounded by his adversaries, and looked for a way to make it fresh, to use energetic stylistic innovation to amplify the story point emotionally and perceptually.

Nothing in the sequence violates continuity editing’s basic principles. The shots keep screen direction constant and character position clear. Indeed, the director has understood spatial continuity very deeply: the men to the left of Bando are pushed far to the left side of the frame, the men to the right are squeezed rightward, so that Bando is always implicitly filling the area they’re recoiling from. But what American director would have risked such a bold piece of cutting?

Orochi, let’s remember, was released the same year as Strike and Potemkin. If this passage had been known to the earliest generation of film historians, Japan might well have been greeted as another birthplace of daringly dynamic montage. (2)

There are several other intriguing flourishes in the footage on display in Bantsuma, particularly a scene of Bando dying in a swirl of steam (this entry’s top image). But two points should be clear: this is innovative filmmaking of a high order, and it took place in a shamelessly commercial film industry. Mainstream filmmaking in Japan has been open to stylistic experiment to a degree rare in other popular cinemas. You can trace a line from the 1920s to the present, from the chambara directors through Ozu and Mizoguchi and Kinoshita and Suzuki Seijin right up to Kitano and Miike. Along a parallel path, Hong Kong action cinema pressed filmmakers toward creative renovation of film technique. (3) In this tradition, the action films of Bantsuma and his peers hold an honored place.

The lessons are familiar ones from this blog. Mass-market cinema harbors experimental impulses; creative directors working in well-known genres are often striving to push the limits. By attending to technique, we can discover a dazzling variety in areas of film history not usually considered “artistic.”

PS: Through Digital Meme, Matsuda has also made available a treasury of 55 animated films from the earliest years. The are at work on a DVD of early Mizoguchi films, including a fragment I’m keen to see from Tojin Okichi (Okichi, Mistress of a Foreigner, 1930).

(1) A large set of them has been available for some years on a DVD-ROM, also available from Digital Meme [10]. For useful reviews, go to Midnight Eye [11] and hors champ [12].

(2) ) I offer several other examples in the essays “Japanese Film Style, 1925-1945” and “A Cinema of Flourishes” in the forthcoming Poetics of Cinema.

(3) I make this argument in Planet Hong Kong and the essays “Aesthetics in Action” and “Richness through Imperfection” in Poetics of Cinema.