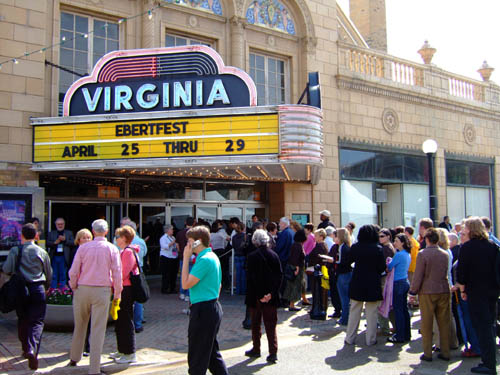 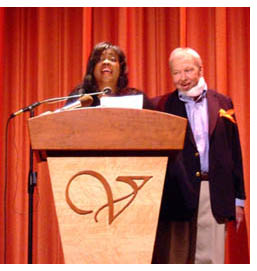 [1]David and I just got back from Roger Ebert’s Overlooked Film Festival. It’s been held under the auspices of the University of Illinois, Roger’s alma mater, in late April for nine years now. This year the event was front-page news because our irrepressible host attended the event while recovering from surgery for salivary-gland cancer and complications last summer.

Roger’s features have changed somewhat and he faces further surgery and rehabilitation. Yet the man’s enthusiasm for movies [2] and movie people has not waned. Most of the audience for Ebertfest (as it will officially be called starting next year) are regulars, and the standing ovations that greeted Roger and his wife Chaz show that the enthusiasm and affection are mutual. For more coverage, go here [3] and here [4]. For the official photoblog, with lots of neat pictures, go here [5].

If anything, Ebertfest audiences seemed even more cheerful and energetic than usual, happy that Roger has been so determined to avoid canceling this year’s event.

David and I have fond memories of Roger’s last visit to the Wisconsin Film Festival in 2006. There he introduced a restored print of Laura, held a signing at a local bookstore, and appeared at other screenings. People passing him on the street called out, “Hi, Roger,” as if he were an old friend. He graciously allowed me to interview him on the subject of press junkets for my chapter on marketing in The Frodo Franchise. There’s no way just to look up the history of junkets. No one has written one. But Roger is a primary document, having been attending them on and off since the 1960s. I learned a lot from our talk.

We drove down from Madison to Urbana-Champaign on Wednesday, David attending for the fourth year and I for the third. The opening film that evening was Gattaca (1997). With tepid reviews and box-office on its original release, Gattaca definitely counts as an overlooked film. Shown in an excellent print on the giant screen of the vintage Virginia movie palace [6], the cinematography was stunning and the story absorbing. Not an utter masterpiece, perhaps, but a very good film that deserved revival. As usual, people came from all over America to pack into the restored 1525-seat venue.

Now we’re back…and doing a summary blog. We had little time at the festival, and during our last day the web service at our lodgings conked out, so this stands as a fill-in.

I saw ten films across three days and four nights.

The Virginia theatre did special justice to Gattaca. Writer-director Andrew Niccol used the anamorphic format imaginatively, a bit in the chilly manner of THX-1138, and the framings appeared to full effect on the 56-by-23-foot screen. This time I noticed how much the credit sequence, with only the G-A-T-C letters appearing first, owes to Godard. Like Alphaville, Gattaca uses not artificial sets but actual buildings to evoke the near future. 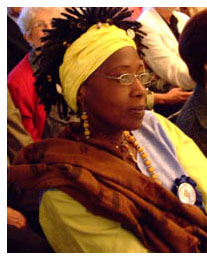 [7]I thought that Moolade held up well on my second viewing, and the post-film discussion with the main performer Fatoumata Coulibaly (right) and Professor Samba Gadjigo was informative. The film’s call for an end to female genital mutilation is typical of Osmane Sembene’s use of controversial material; Professor Gadjigo recalled that Sembene calls his cinema a “night school” for Africa. Ms. Coulibaly said that in production “Papa Sembene” wouldn’t make eye contact with her, but before filming a painful sex scene he told her that she was “doing the scene for future generations.”

Sadie Thompson was still fine, I thought, with Walsh’s skill in cutting and staging exemplifying what Hollywood could do so easily in 1928. Swanson of course is tremendous in the role, using her whole body to tell the story of a woman who’s not as hard-edged as she makes out. The score by Joseph Turrin, conducted by Steve Larsen, was discreet and compelling.

La Dolce Vita seemed to me not to wear so well. I hadn’t seen it in at least twenty years, and its pacing and dramatic point-making appearing at once heavy and unfocused. Still, the film has that patented Fellini verve, and its daring fresco-like structure makes it a remarkable experiment in panoramic storytelling. It’s historically an enormously important film, and Jackie Reich illuminated it in our onstage discussion afterward. She has just published a book on Mastroianni’s career, Beyond the Latin Lover [8].

Of the items that were new to me:

The Weather Man took me by surprise, not only for its glum tone and antiheroic protagonist but also for its refusal of a tidy happy ending. Of Steve Conrad’s screenplay, Gil Bellows remarked that “one of the things that he can do is make you cringe for a character.” To his credit, Gore Verbinski, of Pirates of the Caribbean fame, found this uneasy domestic drama/ comedy a congenial project. 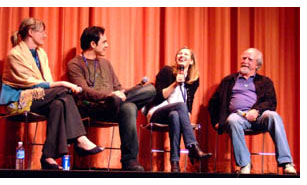 [9]Come Early Morning by Joey Lauren Adams was a clear-eyed character study of an intelligent, flawed woman. Lacking villains and almost lacking heroes, it captures the rhythms of life in a small Arkansas town. Our protagonist, quietly efficient in her job, is caught in family and romance problems as she moves from man to man in a beery stupor. It was tactfully directed by Adams and graced by the underappreciated Ashley Judd. The Weather Man concludes with our hero facing us in close-up, but Come Early Morning ends with the protagonist turned away; in each case, the image feels right. On the left, Lisa Rosman, Eric Byler (Charlotte Sometimes), Joey Lauren Adams, and Scott Wilson (who plays the protagonist’s father).

I must be the last person in North America to see Holes. Its tight plot, clever humor, and easygoing handling of racial matters endeared it to me. As in old Disney fare, familiar actors (Jon Voigt, Sigourney Weaver, Robin Wright Penn, Tim Blake Nelson) are willing to ham it up for the kids, with enjoyable results. And I was startled by the intricate flashback structure on offer; are kids now being trained to follow movies like 21 Grams? Given the interracial love story at the movie’s center, I had a new angle on what Walden Media might be contributing to modern Hollywood, something valuable that escapes cliches about “family-friendly” and “faith-based” entertainment.

Man of Flowers was a crowd-pleaser. I admired Paul Cox’s visuals, though the grainy print probably didn’t do justice to the range of dark tones in the original. An exercise in portraying a wealthy man’s obsessions and their sources in childhood, it moved toward Buñuel’s Archibaldo del Cruz, but it wasn’t prepared to be as lurid or delirious. A bit too dry and tasteful, perhaps. Still, I admire patient, unshowy long takes, and Man of Flowers is full of them. The photo above shows Paul reading a heartfelt tribute to Roger. 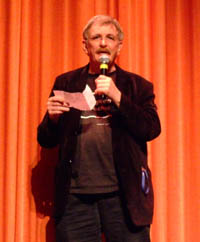 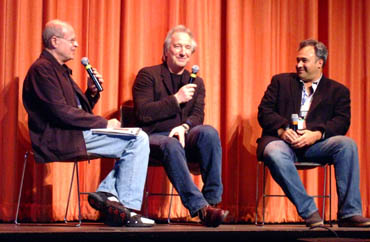 Perfume: The Story of a Murderer was much liked by the audience, and the presence of Alan Rickman made it all the more pungent. I wanted to like it more than I did. Despite my admiration for Tom Tykwer’s other films, particularly Winter Sleepers, The Princess and the Warrior, and Heaven, this one struck me as an overproduced Euro effort at a Big Movie. I thought it overdid the camera tricks (slow-mo, ramping) and the insistence on stuffing every shot with details (e.g., fish, cobwebbed glassware, glistening golden liquids). Above, you see the great actor with Festival Director Nate Kohn and entertainment analyst David Poland. 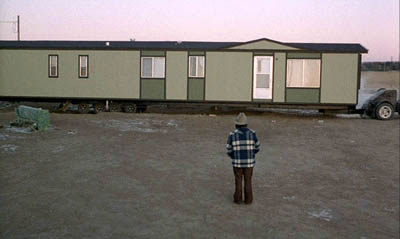 The simple and modest Stroszek was, for me, better at evoking smells—for instance, the stale smoke of the Himmel bar that our hero frequents. The print was faded and weatherbeaten, but the mysterious simplicity of this modern classic came through. The Wisconsin scenes, shot in Plainfield thirty years ago, wouldn’t need much changing today. As usual, I enjoyed the porous, unpredictable plot and Herzog’s willingness to dwell on unfathomable moments like a premature baby with powerful fingers (sleeping, he looks like a wrinkled alien) and the warped imagery of people passing a prison, seen through a hanging water bottle. The dancing chicken became one of the top screen icons of the 1970s.

*“None of the people I write about have friends.” Steven Conrad, screenwriter.

*“The US and Europe are my market. Africa is my public.” Osmane Sembene, quoted by Samba Gadjigo.

*Werner Herzog gave Roger Ebert an early alert about the importance of Anna Nicole Smith in American culture: “The poet must not avert his eyes.”

*“When I pray, I pray to Jesus.” Joey Lauren Adams.

*Why did Michael Wiese move to Penzance? “I was in a Witness Protec—oops.”

*“I’ve learned more about directing by working with bad directors than with good ones. And I’ve worked with a lot of bad directors.” Joey Lauren Adams.

*“Sometimes I think I’d like to join another species. . . . They seem to live a more sensible life.” Paul Cox.

*“Our technological civilization is not sustainable on this planet. Nature is going to regulate us very quickly. . . .We’ll be the next ones [to go extinct]. But that’s okay. Let’s enjoy movies and friendship and beer.” Werner Herzog.

*“I saw perhaps three or four films last year. I love cinema, but I’m not a cinephile.” Werner Herzog.

And some portraits of Ebertfest regulars: 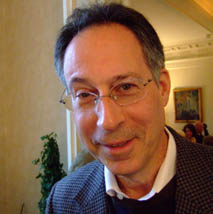 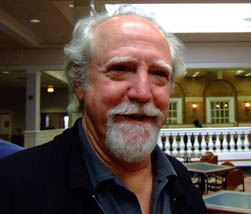 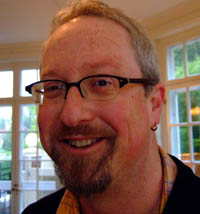 First: Michael Wiese, filmmaker (Hardware Wars, The Sacred Sites of the Dalai Lamas) and publisher of outstanding books [11] on the art and craft of film. Next, actor Scott Wilson (In Cold Blood, Junebug, The Host, and many more). Finally, Jim Emerson, who runs Roger’s website and writes fine film criticism at Scanners.

Each year, several guests receive an Ebert Thumb. This year, Kristin was one of the lucky ones. 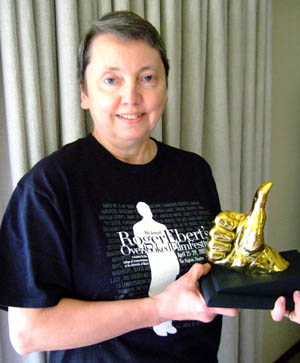 Finally, here I am with Michael Barker, co-president of Sony Pictures Classics, and Werner Herzog. All I said was that I was from Wisconsin…. 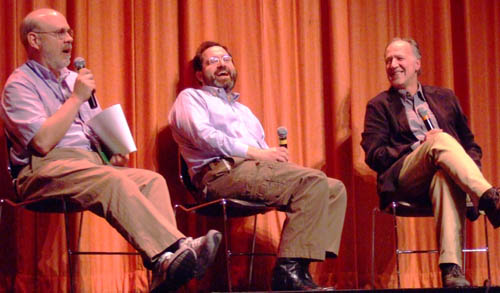 I plan to blog again soon about Roger and his contributions to filmmaking and film culture. For now, let me just echo Kristin’s opening point that his passion for film is exceeded only by his enjoyment of other people. This weekend’s gathering of top-rank filmmakers, young and old, and the enthusiastic audiences showed that he is probably the most deeply loved film critic whom we have ever had.