Today the Virginia senatorial campaign seems to revolve around whether you reveal yourself to be a bad person if you write a novel with disturbing or naughty scenes. It’s the sort of question routinely considered, more dispassionately, by the members of the American Society for Aesthetics. [1] The Society consists mostly of professors, mostly of philosophy, who try to understand the most basic principles of how art works. I’ve been at their annual conference in Milwaukee since Wednesday night. 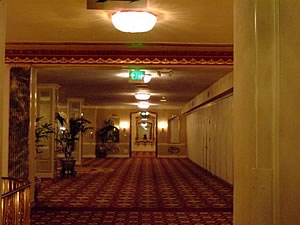 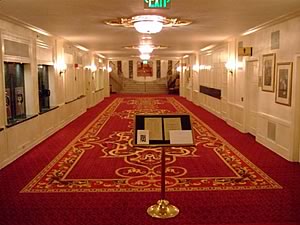 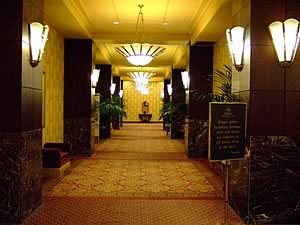 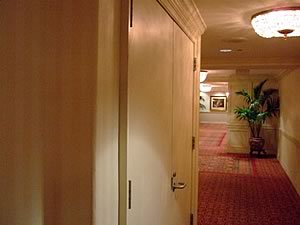 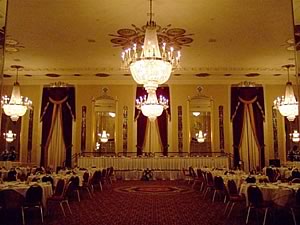 The event is held in the Hilton, an opulent [2] building finished in 1928 (that is, just before opulence went away for quite a while). It’s an overpowering, somewhat eerie place, a little like the hotel in The Shining. Chandeliers hang from high ceilings. Corridors stretch on forever, silent and empty. Around any corner you may find a painting, a throne, or a signpost pointing you in several directions. You don’t exactly get lost, but the sheer size of the place, along with the occasional touch of Midwestern kitsch, suggests Last Year at Marienbad redecorated to suit the Amberson family. The same aesthetic principles, blown out to a more humungous scale, gave us The House On The Rock [3], one of Wisconsin’s great contributions to grassroots Dada.

In my first day here, there were intriguing papers and discussions. I couldn’t go to all of them, but I did visit a session on artistic genius. Peter Kivy’s paper, “Mozart’s Skull,” argued that an artist we acclaim as a genius raises some problems for ordinary mortals. Genius disturbs us, especially genius in very young people, like the prodigy Mozart. Genius is also very mysterious; we don’t know how someone like Mozart could produce so much music of such high quality—indeed of perhaps the highest quality in the Western art-music tradition.

Kivy believes, as I understood it, that genius is a real quality that we can’t explain by trends in taste or strategies of careerism. He castigated what he called “political deconstructionists” who want to deny that genius exists. In his account, they try to show that praise for gifted artists is actually PR: the reputation is constructed by historical circumstances and has nothing actual at the center. Kivy insisted that, regardless of how his career was promoted, Mozart was truly gifted by orders of magnitude beyond nearly all composers. So how to explain those gifts?

Kivy suggests that genius is a mystery that we may never be able to solve. He compares his argument to one floated by philosopher Colin McGinn, who suggests that consciousness is the sort of problem that we may never resolve, because it’s just not in the cards for creatures like us. That’s not to say that the explanation would be supernatural, as if, say, Mozart was truly kissed by God. (The play and movie, Amadeus, use his middle name to play with this possibility.) Maybe there are non-supernatural factors that create a genius; but we might not ever be able to detect them.

The questions raised in the discussion period were fascinating, with a couple of people saying that one could study how Mozart’s reputation was constructed through social institutions of the time without denying that the basis of the reputation was the genuine excellence of the music. Another listener pointed out that Mozart’s reputation is something of a special case. He was praised and understood instantly, but the music of the late Beethoven puzzled people who had acclaimed his earlier work; it took later generations to see the “genius” embodied in the Ninth Symphony and the late string quartets. Maybe the standard of genius does indeed change with time.

I began to muse over whether we cinephiles ever talk about great filmmakers as true geniuses. Even the directors that are most admired across film history—Renoir, Ozu, Welles, Hitchcock, Dreyer, Eisenstein, Hitchcock, etc.—don’t usually get called “geniuses.” Perhaps this way of talking about artists is part of a classical-art tradition that film never joined…or came too late to join.

A longer session was devoted to comments on my old friend Paisley Livingston’s book Art and Intention [4]. I’ve mentioned this book elsewhere [5] on this site, and it seems to me a remarkable attempt to show how an idea of intentional action can help explain creative processes in art. For students of film, his ideas about collective artistic creation—several people pooling efforts to make a film or some other work—are particularly interesting. In this panel, several other distinguished philosopher of art analyzed, praised, and criticized the views expressed in the book.

That night, after my own talk on early CinemaScope, we went to a reception at the lovely Milwaukee Institute of Art and Design [6]. (Animator Bill Plympton will be visiting it soon.) Across the evening, I met several people keenly interested in cinema–actually, who isn’t? Our talk about movies went on for a long time, continuing in a pub in the hotel. There was a reunion of former Madison philosophy students, all protégées of Noel Carroll, and it was fun to talk movies with them. I don’t think I convinced them that Tom Cruise and Keanu Reeves are excellent screen actors, though they were more sympathetic to my case for Sandra Bullock.

Next day I skipped the ASA sessions to go book-hunting with Paisley. Among other stops, we visited the Renaissance Bookstore, another Wisconsin monument. Several stories high, the collection of old books and magazines is monumentally daunting. This is where all books go to die, in dust. Still, I found mysteries by my new passion, George V. Higgins. Earlier that day, I picked up Scott McCloud’s Making Comics [7], which looks like a worthy successor to his superb Understanding Comics and his followup, Reinventing Comics. Film scholars can learn a lot from comic art (graphic novels, comic strips, etc.), and McCloud is the best guide to the aesthetics of comics I know. Come to think of it, he should be invited to the next ASA convention. . . .