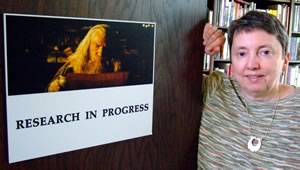 Ordinarily, though, I’m based in the Department of Communication Arts at the UW, as an Honorary Fellowship. That basically means that I agree not to teach and the Department agrees not to pay me, but I have a title, a campus address, University Internet access, and a library card—all very handy things in doing my work.

In between revising these textbooks, I have the luxury of working on whatever research projects intrigue me. One of my main interests is close formal analysis of films. My dissertation was on Sergei Eisenstein’s Ivan the Terrible, and that became my first scholarly book in 1981 when Princeton University Press brought it out as Eisenstein’s Ivan the Terrible: A Neoformalist Analysis. In 1988 Princeton also published my second book of analysis, this time of ten films, as Breaking the Glass Armor: Neoformalist Film Analysis.

The history of film styles also fascinates me. For a long time I have been working on a study of what I call the “commercial avant-garde” movements of the post-World War I era in Europe: German Expressionism, French Impressionism, and Soviet Montage. Early on I realized, however, that we simply didn’t know enough about the norms of ordinary commercial cinema to provide a context for studying early avant-garde cinema. Investigating those norms has resulted in three books. In 1978, I undertook to trace the initial formulation of the guidelines of American filmmaking. That project resulted in a collaboration with David and with our colleague Janet Staiger on The Classical Hollywood Cinema: Film Style and Technique to 1960, published by Columbia University Press in 1985.

I also needed to know more about how many American films would have been showing in Germany, France, and the Soviet Union at the time when their avant-garde movements arose. We all know that Hollywood films have long dominated world markets, but when and how did that start? I wrote a monograph, Exporting Entertainment: America in the World Film Market 1907–1934 (British Film Institute, 1985). More recently, I investigated the norms of German filmmaking practice in the post-World War I era by looking at the films of the great director Ernst Lubitsch in Herr Lubitsch Goes to Hollywood: German and American Film after World War I (University of Amsterdam Press, 2005). With all this historical background established, I’ll return to the avant-garde movements project.

Although The Classical Hollywood Cinema ended its coverage in 1960, David and I have both been concerned to demonstrate that the same basic guidelines that were formulated back in the silent era are still to a considerable degree underpinning the ways in which American films are being made now (something that not all historians agree on). Having focused largely on the silent cinema, I jumped forward to Hollywood filmmaking since the 1970s, looking at the narrative structure and tactics of ten modern classics in Storytelling in the New Hollywood: Understanding Classical Narrative Technique, published by Harvard University Press in 1999. As a follow-up, I turned my Oxford lecture series, which dealt with the similarities and differences between film and television narrative structure, into Storytelling in Film and Television (also Harvard, 2003).

To a considerable extent, this interest in Hollywood norms also led to my forthcoming book, The Frodo Franchise: The Lord of the Rings and Modern Hollywood (University of California Press, 2007). Here I cast my net wider and examine the larger phenomenon of this hugely successful franchise, examining the film’s making but also its marketing via the Internet, its merchandising (particularly DVDs and video games), and its impact on world cinema.

Alongside my film work, I have taken on some research projects in other fields—hobbies, as it were. During the 1980s I became interested in the writings of the comic genius P. G. Wodehouse and especially his Jeeves-Wooster series. I launched into a project to analyze the series and its historical background. In 1985, I was fortunate enough to become the Archivist of the P. G. Wodehouse Archive, and I have visited England at intervals ever since to update the inventory. My book, Wooster Proposes, Jeeves Disposes, or Le Mot Juste, appeared in 1992 from James Heineman.

Shortly after I finished that book, I took a tour of Egypt—expecting it to be my one and only visit there. Instead, I found another fascination: not just ancient Egyptian history, but the art of the Amarna period, the era when the pharaoh Akhenaten strove to impose the world’s first monotheistic religion on the country. I began studying the subject, attending Egyptological conventions, and eventually presenting papers at them. In 2000 I was invited to join the Egypt Exploration Society’s Expedition to Tell el-Amarna, where I have worked for three-week stretches during six seasons. My task is to inventory the many hundreds of statuary fragments found in the ancient city and to make matches between them where possible. During this work I have reconstructed surviving portions of a granodiorite statue of Akhenaten and his wife Nefertiti. (For information on this work, see amarnaproject.com [2].) The inventory was completed in 2006, though I hope that more statuary fragments will be found. In the meantime, I am visiting museums around the world to examine their holdings from Amarna and am sifting through the accumulated data to write a study dealing with the kinds of statues that stood in the ancient city and where they were located.

I have also long been a fan of the work of J. R. R. Tolkien, and indeed, several years ago I began researching a book on his novels. That got set aside when I seized the chance to write a book on Peter Jackson’s film adaptation of The Lord of the Rings, interviewing many of the filmmakers and watching the late stages of post-production on The Return of the King. With that project safely in press, I hope eventually to be able to return to the book on Tolkien.