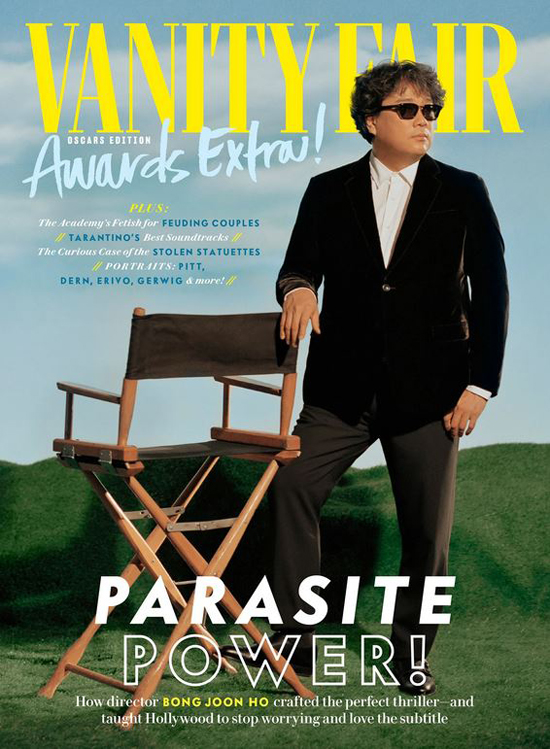 It seems like anyone writing for an online or print periodical, whether media-oriented or not, is searching for some sort of hook on which to hang an article about Parasite and Bong Joon Ho. Some of these are a bit of a stretch, others are a bit ephemeral but interesting. All testify to the surprisingly broad interest in a relatively little-known director of the first foreign-language film ever to win the Best Picture Oscar.

Some of this burst of coverage undoubtedly stems from the fact that relatively few people know anything about Bong. Predictably there are many quick overviews of his career to catch people up, as well as plenty of interviews and of where-you-can-stream-Bong’s-films guides.

Here I offer a some links to a fair sampling of some of the less predictable pieces that I have run across. Some are quite bemusing. A few were published before the February 9 Academy Awards ceremony, but the flood has, not surprisingly, come after it.

Such pieces tend to fall into categories. 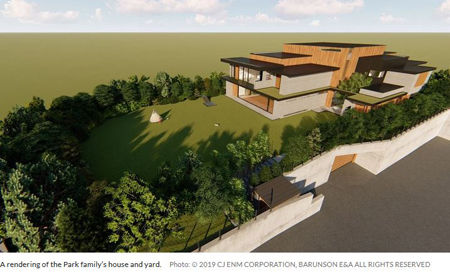 People are fascinated by the Parks’ gorgeous (at least on the surface) house and yard. Back on October 31, 2019, Architectural Digest, of all places, published an interview with Bong [3] about the set. This is surely one of the most prestigious of non-media outlets to publish on the film. After the Oscars, The Guardian, which has diligently published on various aspects of the film (see bottom), caught up and ran a piece about the set [4]being the “real star” of the film and considering it from a genre point of view.

The mysterious “viewing stone” has been discussed. The Guardian again (see bottom line of bottom image), on February 17, ran a story [5] entitled “Built on rock: the geology at the heart of Oscars sensation ‘Parasite.'” 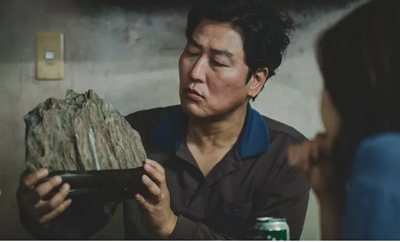 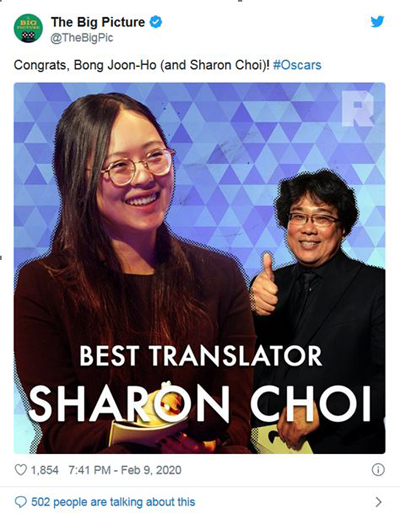 Everybody seems to be enchanted by Sharon Choi, who has accompanied Bong internationally during the long awards season from Cannes to the Oscars. On February 10, Buzzfeed reported [8], “There’s a Ton of Love and Memes for the interpreter of ‘Parasite’ director Bong Joon Ho.” Sure enough, all over social media there are people gushing about her (above, from the Buzzfeed story).

On February 18, a Variety headline trumpeted [9], “Bong Joon Ho Interpreter Sharon Choi Relives Historic ‘Parasite’ Awards Season in Her Own Words (EXCLUSIVE).” Choi had, the story reveals, turned down “hundreds of interview requests” before allowing Variety to print her story. In fact, there are interviews with Choi available on the internet, but the Variety story is not an interview. It’s a memoir by Choi in which she recalls the awards season. 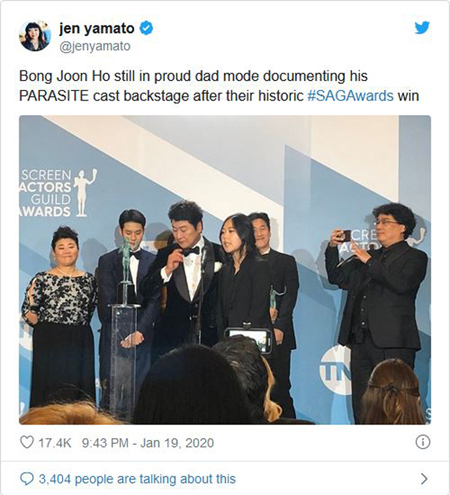 There are articles about the popularity of Parasite and Bong.

On January 20, into awards season but before the Oscars, Morgan Sung posted a piece on Mashable [11]: “Parasite director Bong Joon Ho became a proud dad meme.” On social media, people were posting photos of Bong taking “proud dad” photos of his cast and crew getting awards (above). Note the number of likes and people “talking about this,” plus the presence of Sharon Choi in the group. The Mashable piece presents several more such snips.

Two days after the Oscar nominations were announced, on January 15 Junkee’s Joseph Earp posted [12] about “Bong Joon-Ho, Viral Superstar,” proposing that Bong has become one of those rare directors who becomes a brand in himself. He picks up on Quentin Tarantino’s remark that Bong could become the new Spielberg.

On February 19, the livemint site [13]reported gleefully that the day after the Oscars saw a 857% surge in searches on “Parasite.” This as opposed to 117% for 1917 and 132% for Jojo Rabbit. As the author remarks, “Bong Joon-ho’s tragicomedy thriller has been sweeping all awards and cleaning up at the box office, and people have not been able to stop talking (or searching) on Google.”

And why? “Search for director Bong Joon-ho increased for not only being the mastermind behind the film but also for his quirky sense of humour.”

I suppose the blog entry that you are now reading falls into this category as well. (And then there are our earlier comments [14].)

Lessons to be learned

On February 10, one of the odder stories I’ve seen went up on CNBC’s “Make It” page entitled [15]: “‘Parasite’ director says his success is due to ‘a very simple lifestyle,’ not meeting a lot of people.” Why a business-oriented website would consider a South Korean film director’s lifestyle relevant to people aspiring to make a lot of money is anyone’s guess. Clearly CNBC was not able to get an interview with Bong so soon after the awards ceremony. Instead, the insights are derived from an article in the British Telegraph (behind a paywall). That piece is also dated February 10, and since it’s a review (albeit a late one), one must presume that its author had interviewed Bong earlier or derived his information from yet another source.

The Guardian (yet again) ran a story on February 18 headlined [16] “Trust your nose: what rich people can learn from Parasite.” This turns out to be a satirical piece, including such tips as not buying a huge coffee table that intruders can hide under without being noticed. 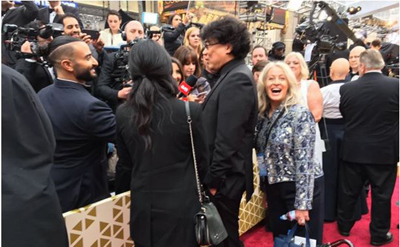 Even a periodical devoted to cuisine found a way to work in a story. On February 10, the day after the awards, Eater Los Angeles ran a story [18], “Oscar-Winning ‘Parasite’ Cast Parties Until 5 in the Morning at LA Koreatown Restaurant.” We learn, among other things, that “Bong Joon-ho hadn’t eaten anything all day and was so famished that the restaurant cooked up galbi jjim (braised short ribs), eundaegu jorim (braised spicy black cod), galbi (grilled short ribs), bibimbap, and seafood tofu pancakes for him and the cast.”

On February 15, Indiewire‘s Anne Thompson took us “Behind the Scenes of Bong Joon Ho’s Oscar-Winning PR campaign [19].” Behind the scenes is publicist Mara Buxbaum, seen above with Bong. To Bong’s left is presumably Sharon Choi, who, Thompson tells us, is writing a book about her experiences as Bong’s interpreter.

I suppose the Parasite fever really does result in part from the fact that this is the first time that a foreign-language film has won a best picture Oscar. It’s probably also to a considerable extent the fact that Bong is a charming person, modest, humorous, straightforward, and very talented, and he comes across as such in his acceptance speeches and interviews. People want to know more about him, as is suggested by looper’s February 12 piece [20]on unknown facts about Bong. If they want to know what his favorite films are and maybe watch them, they can read No Film School’s “25 Favorite Films of ‘Parasite’ director Bong Joon Ho” [21] (February 7).

The only people who dislike Parasite and presumably its maker seem to be President T***p and his gormless fans. On February 20, he decried [22] the awarding of the best-picture Oscar to a foreign film:

And the winner is… a movie from South Korea! What the hell was that all that about? We’ve got enough problems with South Korea, with trade. On top of that, they give them the best movie of the year. Was it good? I don’t know. Let’s get Gone With the Wind back, please? Sunset Boulevard. So many great movies.

I shan’t try to unpack the levels of ignorance and misunderstanding jammed into that passage, which was cheered by many who had never heard of Parasite and had no idea what he was going on about. It does make me pause at the notion of T***p watching Sunset Blvd., if indeed he has, and that he seems to think re-released films are eligible for Oscars decades after they were made. I’ve got to believe he at least knows that Gone with the Wind and Sunset Blvd. have already been “gotten back” and are easily available for viewing in numerous formats. The point though, is that even he has a vague notion that Parasite (or, since he doesn’t know the title, “a movie from South Korea”) is good copy. 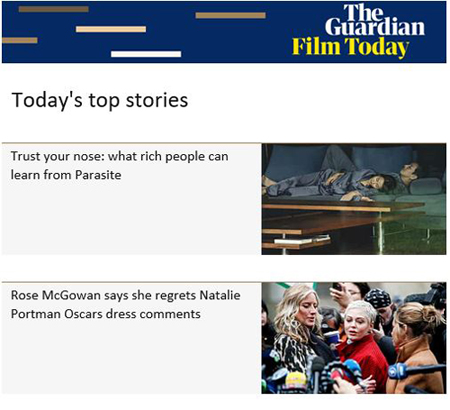 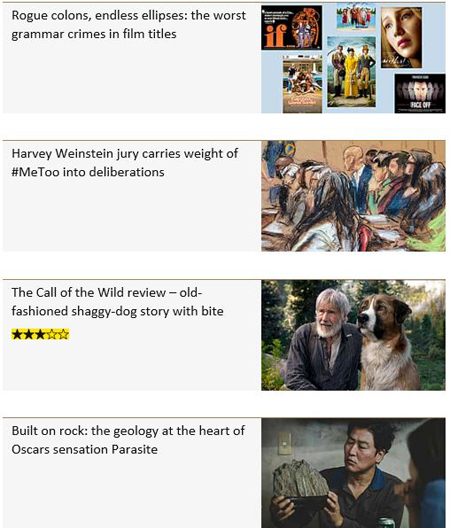