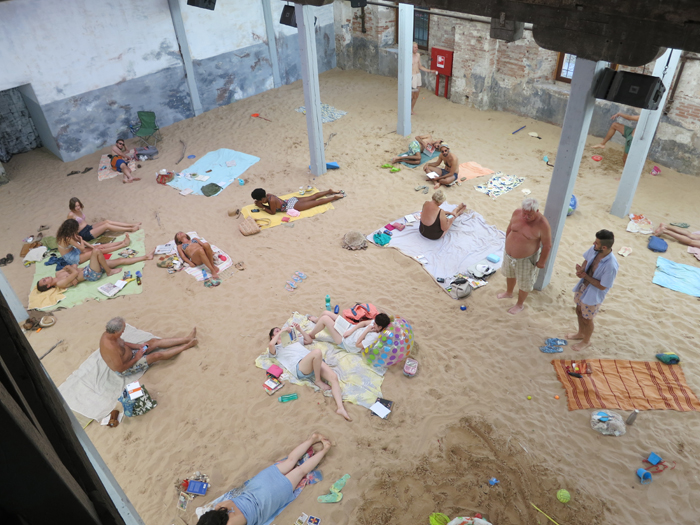 Excitement, shock, tension, maudlin sentiment–these and other emotional qualities are pretty common in artworks. But how often do we get what I’m forced to call anxious languor? That seems to me the dominant expressive quality of the remarkable Lithuanian opera Sun & Sea (Marina), which won the Golden Lion for Best National Participation [2] at the Venice Biennale.

It’s not a film, but having read about it before going to the Mostra, I was keen to see it. Kristin and I were not disappointed. It’s the work of director Rugilė Barzdžiukaitė, writer Vaiva Grainytė, and composer Lina Lapelytė. You can watch extracts  here [3] and here [4] and here [5].

Video clips, or indeed a full-length record, can’t capture this unique spectacle. And of course it set me thinking about film.

Duet in the sun 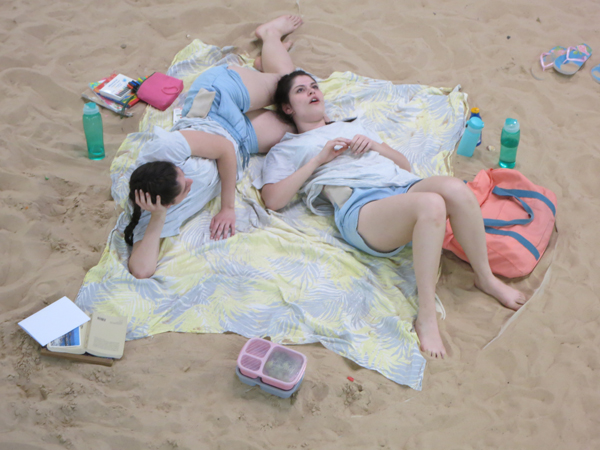 Sun & Sea: Marina portrays a group of people at the beach. Instead of being mounted on a stage, the action, such as it is, takes place on a ground floor of a warehouse. You view the ensemble from catwalks above. On the sand below are pastel beach blankets, personal belongings, and some litter. Thirteen singers and some civilians lie reading or snoozing or listening to cellphones. A woman deals out Tarot cards. There’s a little boy playing in the sand, dudes tossing a frisbee or playing badminton, and occasionally a couple’s dog needs walking. The dog barks from time to time.

The piece lasts about seventy minutes, recycled so you can enter at any point. At the Biennale, it was initially open only one day a week, but later you could attend on either Wednesday or Saturday. The queue wasn’t impossible; I think we waited about half an hour.

The looped nature of the presentation works against there being a plot, and there’s scarcely any characterization. The libretto identifies the Wealthy Mommy, the Volcano Couple, the Workaholic, the 3D Sisters (twins), and others, but when you’re watching it, you’re much more aware that this is about particular bodies in a specific space.

The music, in the lyrical minimalist vein, consists mostly of arias, characters’ soliloquies backed up choral passages. There’s an organ ostinato recalling Philip Glass and tunes that reminded me of the lilting faux-naīveté of Meredith Monk. The rhythm is alternately solemn and bouncy, the phrases are brief, and the mood of the whole score seems summed up in the soaring Chanson of Too Much Sun:

My eyelids are heavy,/ My head is dizzy,/ Light and empty body./ There’s no water left in the bottle.

Some of the arias, like this one, report thoughts caught in the moment. The first and last songs are Sunscreen Bossa Novas, sung by a middle-aged woman worrying about protecting her skin. Another woman complains about dogshit and spilled beer in the sand. One of the most moving passages is the Chanson of Admiration, a breathy soprano solo:

What a sky, just look, so clear!/ Not a single cloud,/ What is there?–seagulls or terns?/ I can never tell./ O la vida/ La vida… 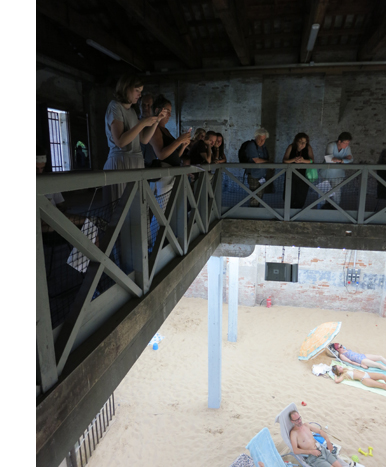 [7]Other characters provide dramatic monologues. The Workaholic sings the Song of Exhaustion, an admission that even relaxing, he can’t slow down. (“My colleagues will look down on me. . . . I’ll become a loser in my own eyes.”) Still others tell stories. A woman recalls her husband’s death while swimming with his girlfriend. A house guest learns that his host has a brain tumor. A couple talks about catching an early-morning flight. Most abstractly, the Philosopher thinks about globalization: how strange to play chess (a game of Indian origin) on the beach while eating dates from Iran and wearing a swimsuit made in China.

Sun & Sea (Marina) has been considered a commentary about our poisoning the planet, and the booklet included with the LP of the score includes essays about climate change. But the opera as staged invokes the crisis obliquely and poetically. One passage notes that the seasons are out of joint at Grandma’s farmhouse, with frost and snow in May and Easter weather during Christmas. It’s presented not as a warning but as a puzzling development. A recurring line in the songs is “Not a single climatologist predicted/ A scenario like this,” and it’s applied to love affairs as well as volcanic eruptions. The crises of the Anthropocene era are refracted through personal relationships.

Environmental degradation is registered through the sensibility of drowsy vacationers. The twin sisters are distressed to learn that coral and fish will perish, but they console themselves that a 3D printer will produce enduring copies of everything, including the girls themselves. (“3D Me lives forever.”) Even pollution right under your nose is filtered through the dazzling torpor of a day at the beach. One of the loveliest songs invites us to imagine that the sea is acquiring new beauty.

Rose-colored dresses flutter;/ Jellyfish dance along in pairs–/ With emerald-colored bags,/ Bottles and red bottle-caps./ O the sea never had so much color!

In all, though you might register some perturbations in the ecosystem, you come away from lolling on the sand feeling pretty good.

After vacation,/ Your hair shines,/ Your eyes glitter,/ Everything is fine.

Eisenstein on the beach 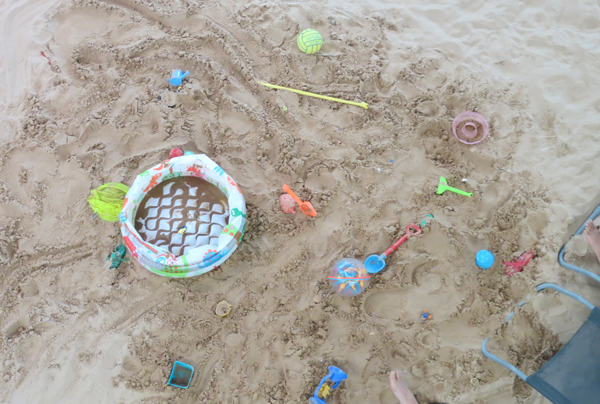 What about cinema? Seeing something so resolutely presentational makes you think about what film can’t do. The online videos only hint at the decentered, dispersed quality of the opera. Some of the action takes place directly under the catwalks, so you can’t take in the ensemble at a single glance. We had to move around to get a sense of what had been happening underneath us.

Just as important, nobody in the audience is significantly closer to the stage than anybody else. Cinema of course has what Noël Carroll has called variable framing, the ability to change the scale of the material in the image (through cutting, camera movement, zooming, optical effects, digital postproduction). Even in proscenium theatre, the people in the orchestra see more details than those in the balcony. But Sun & Sea (Marina) keeps everybody pretty much at the same distance from the spectacle. We can fixate on some figures rather than others, and we can enlarge them artificially via the zoom on our cellphones, but the naked eye has to take in the whole thing at once, all the time. And even that’s not really the whole thing.

The sense of dispersed action is strengthened by the surround-sound speakers. They delocalize each voice. You have to search the array of bodies to find the soloist, and when a song is tossed from singer to singer it scrambles your attention. This might remind a cinéphile of Jacques Tati’s compositional strategies, particularly in Play Time, where long shots coax us to scan the image to find a sound’s source. But at least Tati had a more restrictive frame. Sun & Sea (Marina) plants us in a three-dimensional field with only partial access to the entire scene.

That access is, of course, a very unusual one. When I was first studying classic continuity editing, with the 180-degree rule and matches on action and all the rest, I wondered: Would that system work if the camera were pointing straight down at the actors? That is, what if we constructed a whole story from variants of the bird’s-eye view we use to diagram spatial layouts? Instead of this: 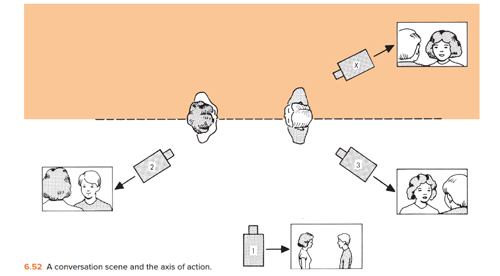 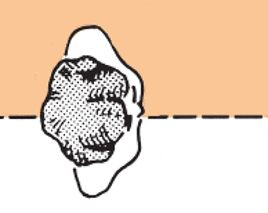 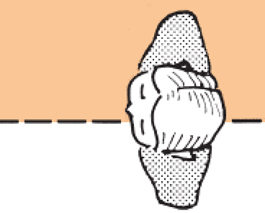 We’d apparently lose the eyeline match, at least! We’d also have to distinguish characters in unusual ways, by hats and hairstyles and maybe boutonnieres. But I was assuming a drama in which people moved around on foot and had face-to-face encounters. Sun & Sea (Marina) suggests that another way to build a vertically viewed spectacle is to show people sprawled out on belly, back, or side–postures motivated by the beach setting. 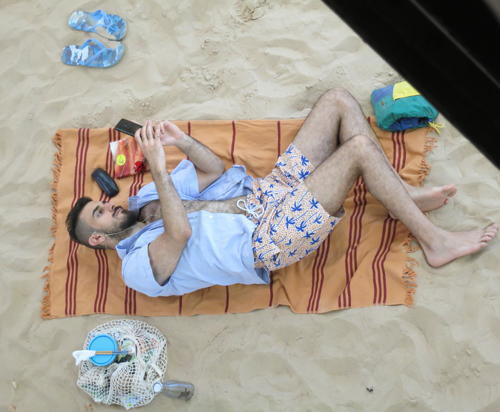 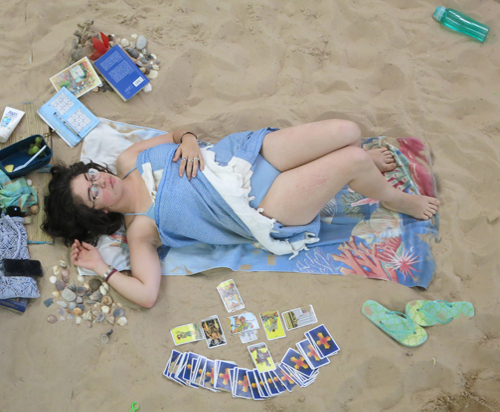 Then perhaps we could, through editing, create “reverse angles” from straight down. Or couldn’t we?

Actually, as usual, Eisenstein was there ahead of us, in his plans for The Glass House, a film set in a skyscraper made of glass. The transparent walls would let us see what’s happening next door, while the floors would create a stacked space, presenting actions from more or less straight down. Naughty as he was, he even conceived a “Love scene through a water closet.” 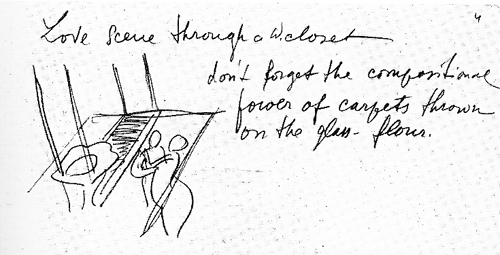 In one note, he called the film’s view “A Hovering Space”–not a bad description of what we see in Sun & Sea (Marina).

I’m still thinking about this remarkable piece of work, about the anxious languor it projects and its ways of building a scattered scene out of microactions. But I’m also enjoying remembering the sheer sensuous pleasure of it. I hope that somehow I get to see it again. I hope you can too.

Our visit to the Biennale was made possible by the generous invitation of Peter Cowie, Savina Neirotti, Paolo Baratta, and Alberto Barbera. As ever, we appreciate the kind assistance of Michela Lazzarin and Jasna Zoranovich. Michael Philips [16] of the Chicago Tribune and Keith Simanton [17], Senior Film Editor and Content Manager of IMDB, accompanied us to the show and proved fine company.

There’s a very informative interview with the artists (who have been friends since childhood) here at BarbART [18]. It includes footage from their earlier collaboration, Have a Good Day!  [19]Background on the artists can be found at Neon Realism [20]. The score is available as an LP [21]. It includes a custom code for downloading an mp3 file. Beware: Many earworms wriggle within.

Of course Sun & Sea (Marina) reminds you of another Tati masterpiece, M. Hulot’s Holiday. Kristin long ago wrote a careful analysis of that film with a title I might have borrowed for this: “Boredom at the Beach.” It’s in her collection Breaking the Glass Armor: Neoformalist Film Analysis [22]. Also on Tati: Watch for Malcolm Turvey’s excellent forthcoming study Play Time: Jacques Tati and Comic Modernism [23].

The diagram of the 180-degree editing system comes from Film Art: An Introduction. Photos in this entry by DB. 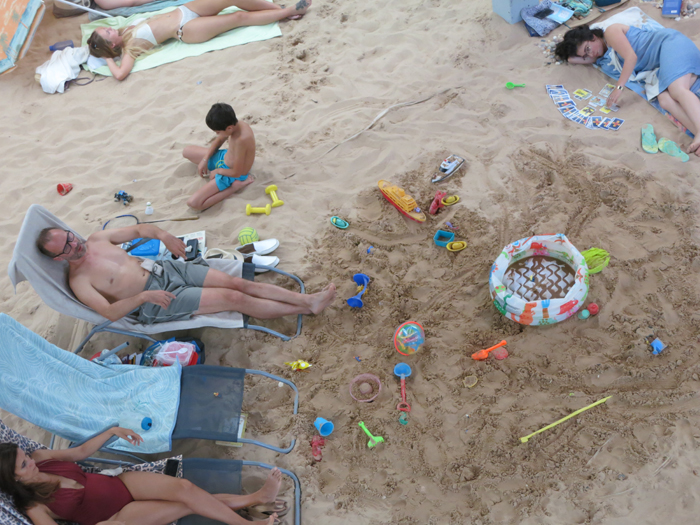