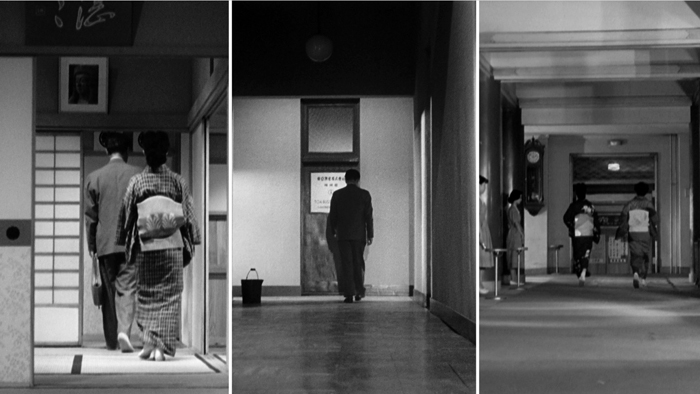 Another bountiful disc release from Criterion: Ozu’s 1952 classic [2] in a 4K digital restoration, with newly translated subtitles. It comes with an enlightening essay by Junji Yoshida and Daniel Raim’s ingratiating documentary on Ozu’s collaboration with his screenwriter Kogo Noda. I contributed a video essay on the film. The most wonderful bonus is Ozu’s 1937 feature What Did the Lady Forget?, which has fascinating affinities with the later movie.

What did which lady forget? 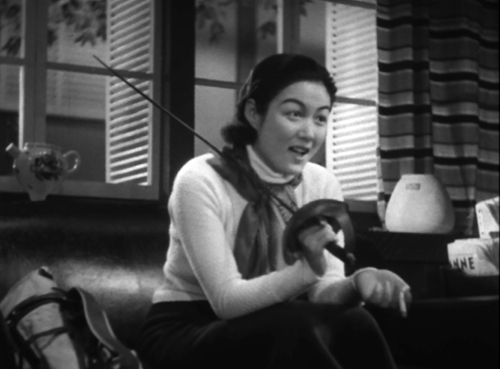 I’ve long been a fan of What Did the Lady Forget? It’s a quasi-screwball comedy treating the clash of the sexes and the generations. As is typical for Ozu, it starts light, abetted by a languid guitar-and-banjo soundtrack, before sidling into graver moments.

In my commentary I touch on its social satire. As the Shochiku studio began making more films about prosperous families, Ozu moved away from the working-class and salaryman milieus he had explored in many masterpieces of the 1930s. I argue in Ozu and the Poetics of Cinema that this film’s comic treatment of the professional class looks forward to what he’ll offer in Equinox Flower (1958) and other postwar films.

A married couple hosts a visit from their sashaying, cigarette-smoking niece, a moga (modern girl) who turns out to be not quite as tough as she thinks. While exploring the city’s nightlife (and occasionally brandishing a fencing foil), Setsuko exposes the tensions in the apparently easygoing marriage. The comedy drifts into moments of Ozuian pathos and melancholy–a chastened Setsuko has to leave Tokyo–but the film ends on a light note.

Stylistic finesse is on display throughout. The framings are dazzlingly inventive, the perspectives are steep, and we’re given those quietly permutational “establishing shots” that introduce scenes in Setsuko’s room. 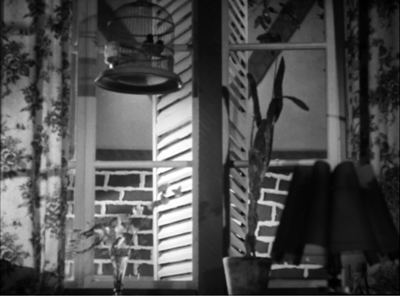 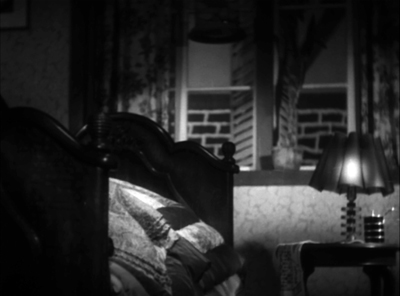 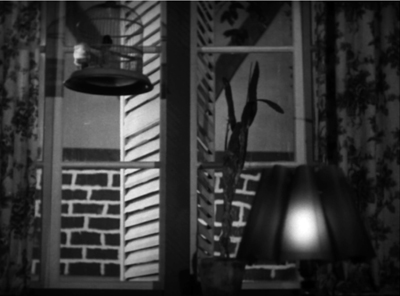 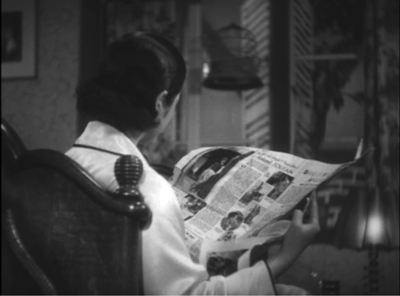 The weird graphic matches in the two boys’ “hit the spot” game could not have been devised by anybody else. 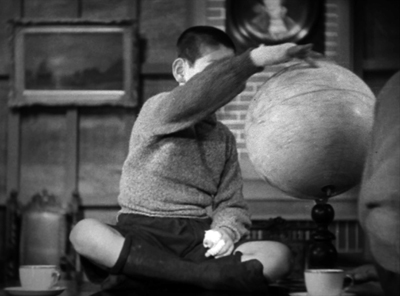 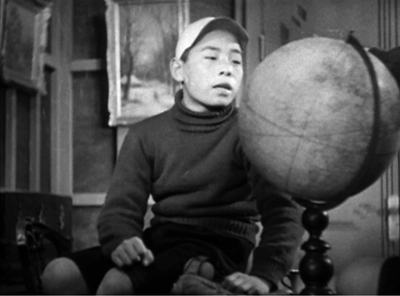 I just love this stuff. There’s so much here, how can this movie be only 70 minutes long?

What Did the Lady Forget? contains a disturbing burst of domestic violence. But the husband soon regrets it, and Ozu and his screenwriter Akira Fushimi develop the crisis in way that keeps shifting our judgment about what characters learn from the incident. 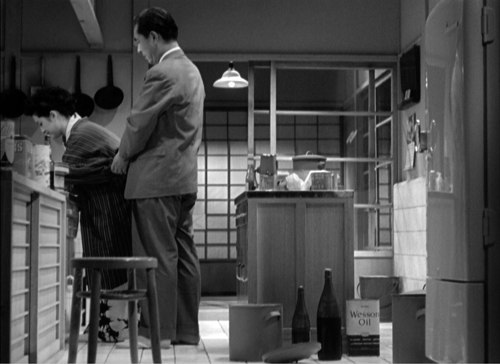 In a parallel situation in the “remake,” The Flavor of Green Tea over Rice, the husband remains calm in the face of his wife’s criticism. Mokichi is far from a paragon (he’s a phlegmatic workaholic, he’s out of touch with young folks and urban culture), but at home he’s quiet and apologetic. When Taeko complains about his table manners, he tries gently to explain why he slurps his rice.

Daniel Raim’s short on the Ozu-Noda collaboration concentrates on the planning of An Autumn Afternoon (1962), well-documented in Donald Richie’s Ozu [11]. But we also have some records of their work routine on Green Tea. Ozu kept no fewer than five notebooks that year, sometimes recording the same event in two or more.

On 20 January, he notes that he and Noda are “bringing back a problematic script.” That’s because the original Flavor of Green Tea over Rice was refused by censors in 1940. In early 1952 Ozu was in the process of moving to Kamakura, so the two men’s collaboration took place in inns, Noda’s home, and the studio. One notebook logs Ozu’s production schedule, while others are more personal. 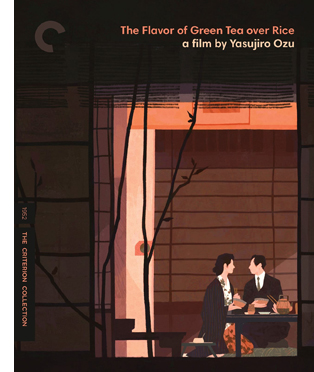 Ozu’s films from the 1950s on were typically planned in the winter, shot in spring and summer, and premiered in the fall, as if he were determined to document each year’s good weather. Ozu and Noda began writing Green Tea on 29 February and finished on 1 April, sometimes preparing three scenes a day. After consulting with Shiro Kido, the studio head, they revised the script. Ozu’s efficiency in planning every scene and sketching every shot allowed production to proceed fast. The crew began shooting on 7 June, in an office set. They finished on 13 July (“Finally, rest!”) and The Flavor of Green Tea Over Rice premiered on 1 October.

Pretty intensive work. But you wouldn’t know it from the companion notebooks. Among chronicles of naps, baths, social gatherings, changing weather, baseball games, and bar-hopping with friends, how did they get any work done? Above all there’s Ozu’s careful record of his alcohol intake (“drank until 2 AM”). A stomach ache makes him think he might have an ulcer. “I must resolve not to drink too much. And stick to it!” Today we would call him a high-functioning alcoholic.  “With the whisky I drank this morning and the shumai I brought back from Tokoen, I wasn’t at all hungry tonight.”

As in his films, the everyday and the unusual get equal treatment. While staying at one inn, he calmly observes the arrival of a woman’s baseball team. And he remained a cinephile. He’s happy to interrupt an evening of dining and drinking to go see William Dieterle’s September Affair (1950).

The film that resulted, I suggest in the supplement, modulates between satire and a generous comedy that gives the main characters, no matter their failings, moments of warmth and dignity. With a light hand Ozu summons up narrative parallels, and he spotlights the split between men’s culture and women’s culture. A troubled marriage is given due weight, but it’s saved by graciousness, as when (above) Mokichi rescues Taeko’s sleeve from the water in the sink.

Ozu carries the humor down to the fine grain of technique, teaching us to play a private cinematic game in which the characters participate all unawares. The Criterion creative team has ingeniously used split screens to help me show the evolution of stylistic patterns across the film. Shedding my Mr. Rogers sweater for a sport coat, I try to crack the mystery of those eerie tracking shots. Like the situations and the dialogue, these barely moving images ought to make you smile.

Thanks to producer Elizabeth Pauker and her colleagues at Criterion, especially Peter Becker and Kim Hendrickson. Thanks as well to Erik Gunneson and James Runde here at UW–Madison.

My book, Ozu and the Poetics of Cinema, is available for free here [13]. Color pictures and everything! But be patient; it’s big and takes a while to download. There are many entries on Ozu [14] and Donald Richie [15] elsewhere on this site. 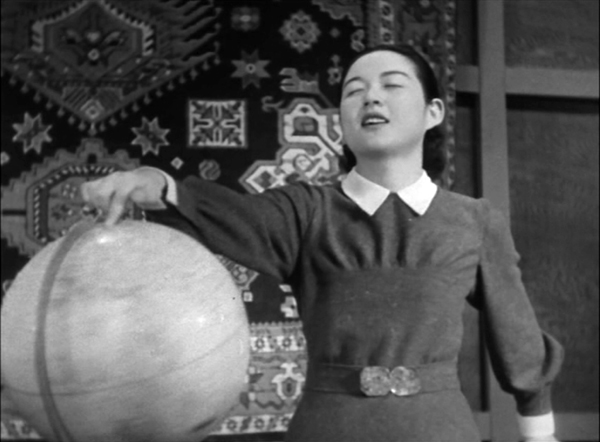