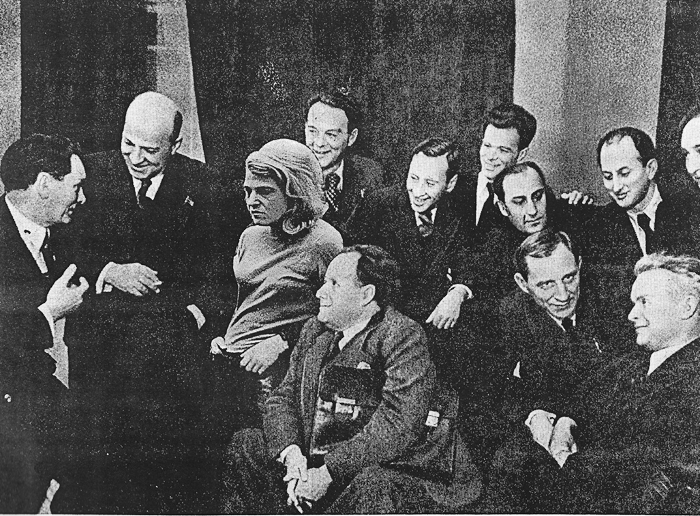 Annette Michelson, a pioneering figure in studying cinema, died nearly a year ago [2], age 95. She enjoyed a distinguished career as an art critic, lecturer, editor, and professor of film. Her influence went beyond her own writings; as an editor she supported now-classic works like P. Adams Sitney’s Visionary Film [3] and the English translation of Noël Burch’s Theory of Film Practice [4]. She was a tireless advocate for contemporary avant-garde filmmakers as well as “difficult” films, from the works of Godard and Vertov to 2001. Upon her retirement, her students and colleagues published a festschrift, Camera Obscura, Camera Lucida: Essays in Honor of Annette Michelson. [5]Many of her essays were collected in a volume called, poetically enough, On the Eve of the Future [6]. 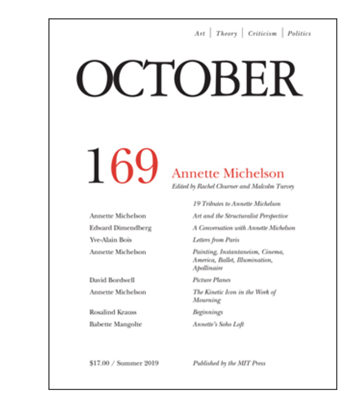 [7]One of Annette’s major accomplishments was co-founding the journal October in 1976. So it’s entirely appropriate that the newest issue [8] is devoted to essays and memoirs celebrating her accomplishments. Edited by Rachel Churner and Malcolm Turvey, it gathers many exceptionally valuable items. It makes available two little-known pieces by Annette: her important essay from 1969, “Art and the Structuralist Perspective,” and a later reflection on Picabia and the cinema. There’s also a wide-ranging conversation with Edward Dimendberg.

Yve-Alain Bois analyzes her early, Paris-based art reviews and journalism, including many extracts and printing in toto her very first piece in the New York Herald Tribune. (The first sentence uses one of her favorite words: radical.) There are lengthy tributes from students, colleagues, artists, filmmakers (Gitai, Rainer, Ken Jacobs). Babette Mangolte contributes portraits and some images of Annette’s legendary loft. In all, this is a monumental undertaking and essential for anyone who wants to understand Michelson’s unique stance at the crossroads of film, visual art, critical theory, and Continental philosophy.

The recollections go far toward humanizing a figure who was for many of us a forbidding presence. I met Annette in late 1972, when I interviewed for a job at New York University. She scared me. (I wasn’t alone.) A few years later, when I did a visiting stint there during Noël Carroll’s leave, she proved much less intimidating. Maybe I was less skittish, or she was more mellow. She took a shine to Kristin, and we developed a mutually teasing friendship. I enjoyed her unusual habits, such as playing Berg on her turntable at ear-splitting pitch.

The last time I saw her was in March 2006. She had recently moved from her loft to a new place in midtown, and she was surrounded by boxes of books. Though somewhat frail, she insisted we go out for lunch. We talked about Eisenstein, Godard, and the history of the Anthology Film Archive.

Years before, feeling frisky during a sabbatical, I sent some friends the photo you see above, accompanied by the following text.

Glasnost’ has brought many unexpected revelations, but few have been so striking as the proof that there existed an objective relationship between revolutionary Soviet filmmaking and the New York avant-garde cinema of the 1960s.

Until now, a continuity between the experimental Montage directors and the “New American Cinema” of Stan Brakhage and Hollis Frampton seemed an academic flight of fantasy. Many scholars had posited such an affiliation, but hard evidence had been lacking. What could the Marxist cinema of the 1920s have offered the apolitical formalists of the post-Beat generation?

Plenty, it now turns out.

While rummaging in old photographs at Goskino, a young Russian filmmaker, Yevgenii Zhirmunsky, found a crumpled envelope labeled “Conference 1935: Miscellaneous.” The notation referred to the notorious 1935 All-Union Conference of Soviet Cinematography, at which the major directors capitulated to Stalinist demands for Socialist Realism.

Highlight of the Conference was the ritual humiliation of Eisenstein, the most celebrated Soviet director, and the elevation of the Vasilievs’ Chapayev, soon to become the prototype of Socialist Realism.

Zhirmunsky discovered that the envelope held several snapshots of cineastes dozing through papers or denouncing their comrades from the lectern. Most informative, however, was an original version of the famous photo of the premiere directors–Eisenstein, Dovzhenko, Kuleshov, Pudovkin, and others. Zhirmunsky was startled to discover that versions of this photo, reproduced in both East and West for sixty years, had eliminated a key participant at the Conference.

Airbrushing and photomontage were common in the Stalin era. When a political figure fell from favor, he was often deleted from all photographs. Sometimes other figures were added in this Bolshevik version of “virtual reality.”

Now, thanks to Zhirmunsky’s discovery, film scholars know that an influential figure of the New York avant-garde attended the 1935 Conference. Professor Annette Michelson, critic, teacher, and tireless promoter of the New American Cinema, was present and, to judge by the photo, became a central participant in the events taking place.

The photo shows her wearing a loose sweater and blue jeans, characteristic garb of New York bohemians. While a woman seems out of place amid the gabardine-suited directors, Michelson’s intensely serious expression suggests that she followed the debates with keen interest. Her proximity to Eisenstein, and his almost adoring expression, suggests a special affinity between them.

Zhirmunsky surmises that Michelson, long an advocate of the historical continuity of the Soviet avant-garde and the New American film, conveyed to her Manhattan contemporaries the essential insights of the revolutionary directors. This would provide the “missing link” long sought for between the two movements.

Not surprisingly, Michelson has been the most outspoken advocate of the continuity of the two traditions.

Zhirmunsky surmises that Michelson’s “formalism” was anathema to authorities and led to her being deleted from the photo.

The photo is to be published in the US journal October this fall, prefaced by an essay by Zhirmunsky detailing the facts behind his extraordinary discovery.

And he persists in his quest for glasnost’ treasures. “I’ve found some new film footage of the taking of the Winter Palace,” he remarks. “There’s a chap in one shot who seems to be Fredric Jameson.”

My friends assured me that Annette would enjoy it. Apparently she did, because she responded in kind.

Professor Annette Michelson asks me, in her present absence from New York, to answer your most kind forwarding to her and to express her profound thanks. I communicated to her your message by telephone last night in California where she was delivering a keynote address at a Maya Deren conference and speaking, as fate would have it, on the Deren-Eisenstein relation.

You can, of course, imagine the extremely great gratification she feels about E. Zhirmunsky’s* discovery. This is a true resurrection that will heal an error and correct a wound maintained for more than a half century! Well, once again, we see that truly Truth is the daughter of Time. Of course you and I know that Professor Michelson, with her usual modesty, rejoices not for herself alone, but for Film History and for all those, who like yourself, labor to its greatest glory.

Professor Michelson found most interesting, of course, your hermeneutics of the original version. She suggested, however, that I communicate to you (although not for publication) her personal interpretation, based, of course, on her living memory of the fateful occasion. You will have noticed that everyone in this picture is smiling or laughing; everyone but Pudovkin, who seems to be explaining something and Professor Michelson (who was , of course at that time, far from being a tenured full Professor, in fact, she had not yet begun the graduate studies from which she … but that is another story).

The reason for this is that Professor Michelson had just challenged the famous director and actor on a point involving the famous debate between himself and Comrade (this is, of course, old style way of speaking) Eisenstein. Perhaps you have some memory of this about building blocks or opposing forces?

Such, it would appear, was the strength of Professor’s challenge coming, in addition to boot, from an American young girl, that the general reaction – even from Donskoi and Bek-Nazarov – was “It appears like the Amerikanska has you, there, Comrade! What have you got to say for yourself now?”

And while Eisenstein is certainly admiring of this daring young female who defends his more correct Hegelian position, he is also clearly amused by Pudovkin’s being flustered by her so that he can hardly defend himself.

For everyone but the two protagonists, the event was a subject of amazement and amusement that lasted far into the Moscow night and beyond, but as you can see from the transcripts of the Conference, it was erased from the record. Perhaps one day, Zhirmunsky or some bold graduate student will turn up the handwritten transcript of this important vis à vis. In the meantime, all heartfelt thanks to you, Professor Bordwell, in Professor Michelson’s name,

*Do you have his patronymic, since we would like to write and thank him?

I learned from this that even a sophomoric jape can help cement a friendship. Stuart Liebman, one of her most devoted friends, tells me that Annette continued to enjoy that picture in her final days. Her sense of humor is only one of the many things that make me glad to have known her.

The group portrait is discussed in Annette Michelson, “From Magician to Epistemologist: Vertov’s The Man with a Movie Camera,” reprinted in October (162 (Fall 2017), 113-132. The essay was first published in Artforum in 1972. She notes that Jay Leyda suggested that the photo might have been misdated and was taken later than 1935.

Thanks to Malcolm Turvey for conversations around this issue of October, which also includes an extract from my book Making Meaning. 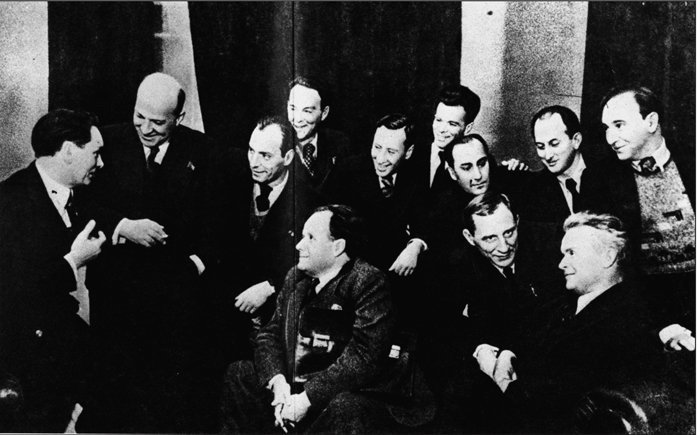 Doctored photograph of the 1935 group portrait, with Michelson removed and a generic comrade substituted.