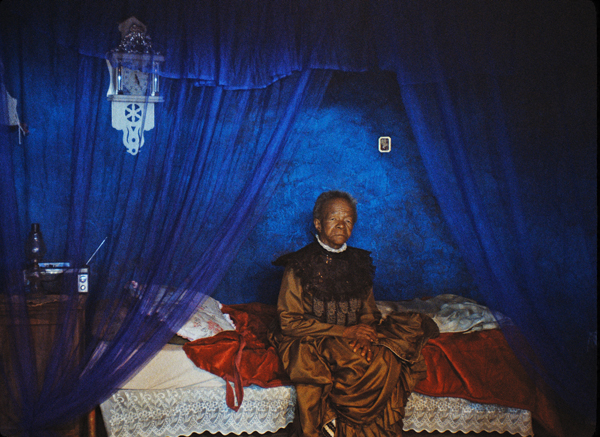 This Is Not a Burial, It’s a Resurrection (Lemagang Jeremiah Mosese, 2019).

For the third year I participated in the Mostra’s College Cinema [2], a wonderful program that funds and guides three features by up-and-coming directors and producers. (Details are here [3].) I’ve reported on the earlier sessions here [4] and here. [5]

This year my developing reaction to the trio of features was governed by what Kristin and I did the day before our panel. We saw two superb classics: Bertolucci’s The Spider’s Stratagem (1970) and István Gaál’s Current (1964). They reminded me of what ambitious filmmaking was like before the arrival of screenplay manuals dictating character arcs and first-act turning points.

In those days, a filmmaker was likely to find a distinct, even unique form for a story. The filmmaker would design the film organically, creating a large-scale shape that would let technique and dramatic structure build in relation to each other, not in accord with standard formulas. 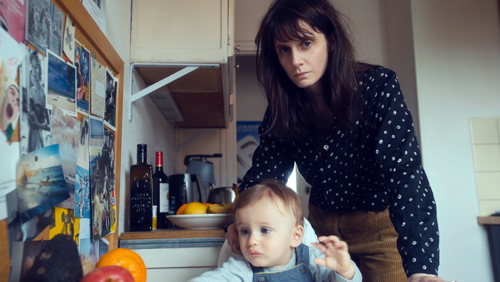 A good example is The End of Love [7], directed by Karen Ben Rafael. The Israeli Yuval and the French woman Julie have a child. He waits in Israel for a new visa, while Julie must manage child care under the pressures of her job in an architecture firm. Each begins to suspect the other of infidelity, and their families in each country add to the tension.

So much for a traditional “relationship” movie, whose ups and downs could have been presented in a standard way. But Rafael and her co-screenwriter Elise Benroubi hit upon a fresh way to trace the couple’s conflicts. Yuval and Julie are keeping in touch via a Skype-like video service, and we are completely confined to their exchanges in this medium. We see only what they see, in a series of to-camera shot/reverse-shots.

Some recent genre films have been “monitor movies,” like Paranormal Activity 4 (2012), Chronicle (2012), Unfriended (2014), and Searching (2018). But these exploit the device for suspense and horror. The End of Love lets the conditions of video communication structure the ongoing drama. A teasing opening suggests that the camera is lying in bed between the couple as they caress themselves; the next scene–a remarkable shot in itself (above)–reveals that video is their channel of communication.

As the film goes along, tensions between Yuval and Julie are presented as much through the mechanics of  video exchanges as through the actors’ (very persuasive) performances. Unanswered calls signal a growing indifference. A mysterious shot wobbling through a dance club suggests either a phone accidentally turned on or a loud, defiant assault on the other person. I was especially taken by the moments when we get slight change of eyelines as characters look from the camera to study the display image of the other person.

The End of Love triggers a lot of ideas about how modern couples are led to expect that technology can overcome family problems. Being always online, always “in touch,” doesn’t mean that you’re engaging authentically with someone else. For all its power, the video hookup in the film creates an illusory intimacy, and its glitches stand for the aggravations, little and big, that come with physical separation. This thematic implication grows organically out of the creative decision to confine our viewpoint to what the camera can see and hear, but not heal. 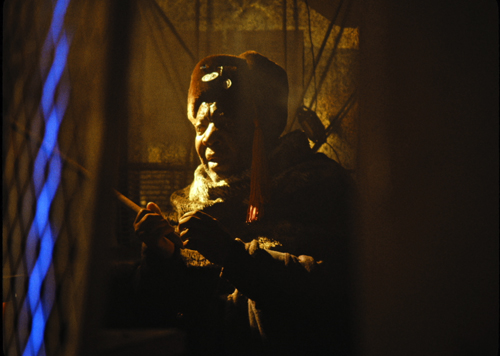 Another vigorous example of letting the material summon up the film’s form is This Is Not a Burial, It’s a Resurrection [9]. Directed, written, and edited by Lemogang Jeremiah Mosese, it’s a poetic work that develops its imagery out of a dramatic situation.

The eighty-year-old Mantoa learns that her only surviving relation, her grandson, has died in a mining accident. After being consoled by her priest and the local choir, Mantoa tries to restabilize her life. But when she learns that her village is to be flooded for a dam project, she vows to save the bodies in the local cemetery–and to prepare her own grave.

This tale, set in Lesotho, is framed by a narrator telling us about her and her community. He sits in a blast of yellow light adjacent to a pool hall, and at intervals the story action pauses for his comments. The film takes its time–about 300 shots in two hours–to dwell on the details of her daily routine, such as the portable radio hanging from the wall, or Mantoa’s changing outfits.

But there are also more surreal images, such as Mantoa on a burned-out bedspring being slowly surrounded by sheep. The community that eventually supports her is presented as an almost abstract force, as are the out-of-focus government workers slowly hacking away at the perimeter of the village. The climax of the film makes powerful use of those figures as Mantoa confronts them in her boldest provocation of all.

Again a familiar situation–a tenacious elder tries to halt the destruction of a community (think Wild River)–is given fresh life through formal elaboration. Out of a primal conflict, Mosese generates a work of mythic dimensions. He does it through lustrous visuals, an evocative soundtrack, and a character who creates a legend that will live for generations. 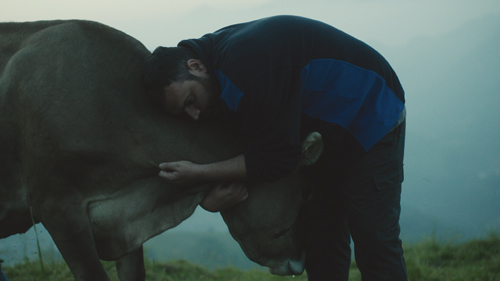 If The End of Love traces a jagged decline in a relationship, and This Is Not a Burial lifts a social conflict into spirituality, Lessons of Love [11] finds another structure, this one aiming to express the inarticulate feelings of a man stuck in a situation. It’s a circle.

Yuri toils on his father’s farm, while his younger brother and sister try to avoid their responsibilities. Stolid, silent, and glum, Yuri harbors a good deal of anger, occasionally expressed in road rage. He relates to the world almost completely through physical contact. 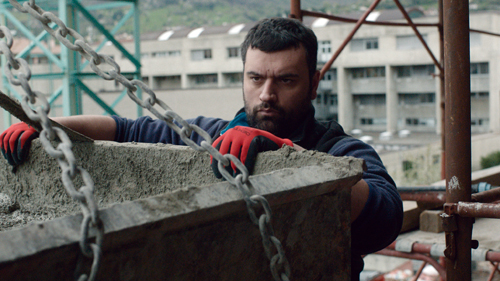 Director Chiara Compara and her co-screenwriter Lorenzo Faggi start from a classic pattern: the migration of an innocent from the countryside to the city. This pattern is refreshed through a strategy going back to Neorealism: the insistence on the physicality of daily routines. A prolonged moment of Yuri tuning a radio recalls the famous scene of the maid’s morning ritual in Umberto D.

The early stretches of Lessons of Love stress the demands of farm work. The first shot is of a milk can, and soon we see logging, veterinary inspections, the purchase of a cow, and the dull evening meal. But we also get a sense of Yuri’s longing when he soberly eats during a TV love scene, and soon enough he’s visiting a strip club, watching as impassively as he did the TV show.

Through a tissue of routines, Yuri’s vague thoughts about escape emerge, and soon he is considering buying cowboy boots, dating Agata, and getting a construction job in town. That’s when the circular structure gets initiated, and new routines replace the old ones. Again, the details of hard labor aren’t stinted, and Yuri is challenged to break out of his smoldering solitude. Can a man who punches and embraces his favorite cow, and who furiously whacks a driver-side mirror, ever learn to talk to a woman who’s kind to him? The last shot of the film, discreetly echoing the first, provides the answer.

A fraught love affair, a defiant elder speaking up for a community’s heritage, and a lonely, locked-in man are familiar enough points of departure for a film. But these three College features offer fresh, rigorous treatment of their stories. Three acts and vulnerable-but-relatable heroes and heroines? Not necessary! There are other ways to go, as young filmmakers can show us.

Thanks as usual to Peter Cowie for inviting me to join the College Cinema panel, and to Savina Neirotti, the Head of the program. Thanks as well to other participants for lively conversation: Chaz Ebert, Glenn Kenny, Mick LaSalle, Michael Phillips, and Stephanie Zacharek. As ever, we appreciate the kind assistance of Michela Lazzarin and Jasna Zoranovich for helping us before and during our stay.

Glenn has a fine appreciation [13] of the College films on rogerebert.com. He too was reminded of Wild River, but no surprise as we’re both nerds in this (and other) respects. 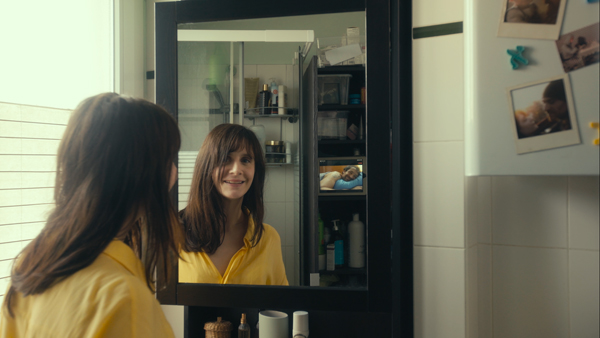