Since David’s brief initial post on the festival, we have been watching films and dining with friends. Ordinarily we blog from the press room, but there seems to be a larger number of journalists here this year than in the past, and it has not been possible to find a seat. So we are behind in our reports on the films we’ve seen, but we’re trying to hurry and catch up.

Here some of the films in the main competition and an extra. 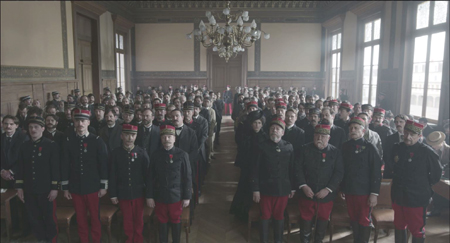 Roman Polanski’s latest feature is a handsome, solemn account of the false accusations of spying that led to the conviction of Alfred Dreyfus. As the film begins, in early 1895, an enormous gathering of soldiers and officers witness the degrading of Dreyfus in a public square, with the military buttons and other regalia stripped from his uniform. Anti-Semitism is commonplace through most of French society, and onlookers revel in the convicted man’s disgrace as he is hustled off to solitary imprisonment on Devil’s Island.

Among the onlookers is Georges Picquart, who joins in the general delight at Dreyfus’s punishment. He is soon, however, elevated to run the military counter-intelligence office which had convicted Dreyfus. Documents he examines cast doubt on the original guilty verdict, and in spite of admitting to being prejudiced against Jews, he insists that he can be objective in investigating the case. The film remains largely with Picquart as he doggedly searches for evidence despite considerable opposition from all sides. Occasional brief scenes show Dreyfus in his exile, but this is a not of the wrongly convicted but of the righter of wrongs.

Everyone knows that ultimately Dreyfus was exonerated and the real spy identified. There was a second trial, however, at which he was again found guilty. Picquart suffered the consequences of his efforts to save Dreyfus by being himself wrongly convicted of forging evidence and forced to resign from the army. This is far less known, at least in many countries, and the film makes it clear just how long justice took to achieve. In 1906, both men were cleared and were able rejoin the military.

J’Accuse is a good, old-fashioned Hollywood-style film, carefully and skillfully shot–in contrast to many current mainstream films. The main acting duties are carried through convincingly by Jean Dujardin (best known in the US as the Oscar-winning star of The Artist) as Picquart.

The film is directed with an unostentatious skill, with the framing, editing, design, and lighting all excellent. The period detail is impeccable. One wonders if Polanski had a chance to see some of the 1899 documentary footage of Dreyfus and military personnel leaving the court after his second trial, which was shown at Il Cinema Ritrovato this year. Some of the shots bear a resemblance to those early images. The staging and cinematography bring to mind films of the era, and one scene, in which a fanatic attacks Picquart in the street briefly looks like a chase film of the early 1900s (see bottom).

So far there is no indication that the film is to be released in the US.

I have admired the work of Chilean director Pablo Larraín, primarily No (2012), Neruda [4](2016), Jackie [5] (2016), and to a lesser extent his early feature, Tony Manero (2008). Given that his three major films were all based on historical events and personages, I was expecting something of the same sort with Ema. I, along with many other reviewers, were quite taken aback and perplexed by it.

I still am not sure what to think of it. While watching it, I could not discern much of a plot or even a coherent character study. Ema is a pyromaniac, bisexual dancer living in Valparaiso with her choreographer husband, Pablo. The couple had adopted a young orphan, Polo, but apparently he had taken on some of Ema’s wildness, burning a house and leaving Pablo’s sister badly scarred. They had then surrendered him to be adopted by some other couple.

Most of the film involves performances of Pablo’s critically acclaimed dance piece, involving numerous performers in front of a giant projected image of the surface of the sun (see top). On her own, Ema performs wild Reggaeton dance moves with her friends (above), seemingly not for an audience (except for chance passersby) but simply to burn off her anger. She claims to want to retrieve Polo, yet her actions hardly suggest that she is any more fit to be a mother than she had been before–especially when she indulges in her delight with a flamethrower she had managed to acquire.

My initial reaction to most of the film was disappointment and to some extent annoyance over the seeming lack of plot or of purpose to all this, since none of the motifs set up seemed to be progressing toward anything. In the final minutes of the film, however, the whole plot suddenly resolved in a perfectly logical, if disturbing and unexpected, fashion. The rest of the film in retrospect made sense, but it is very peculiar to have a film essentially goad and intrigue and even annoy you while delaying its revelation for so long.

The final shot suggests that Ema has not given up her old ways, and that although she has become part of a family of sorts, similar problems are likely to recur.

Larraín’s brief comment on the film in the festival catalogue suggests that the seeming formlessness of the film is intentional: “A meditation on the human body, dance and motherhood.” There is a definite hint of irony here.

I think Owen Gleiberman’s Variety review [7] captures this “prickly art object, one that refuses to invite the viewer in.” I don’t agree with his point about Ema forming a defiant sisterhood aligned against men. After all, Polo ends up not with two mommies but with two mommies and two daddies. But I buy Gleiberman’s conclusion that “The whole film, let’s be honest, is kind of a stunt. Yet it’s a stunt that stays in your head.”

I would like to see it again … I think.

Haiffa Al Mansour (as she is credited here, though her previous films have Al-Mansour) first came to the world’s attention in 2012 through Wadjda, claimed to be both the first feature film shot entirely within Saudi Arabia and the first feature film directed by a Saudi woman. Its engaging story of a girl who enters a contest for memorizing the Koran because she wants the prize money to buy a bicycle–an object traditionally forbidden to females–charmed western audience achieved numerous nominations and wins for prizes around the world.

After two features made for western companies, Al Mansour returns to Saudi Arabia for The Perfect Candidate, a more grown-up tale of female empowerment.

Dr. Maryam, a young woman doctor who works in a provincial hospital reached by an unpaved, muddy road, ends up almost by accident signing up to run for the local city council. (She, by the way, drives her car along this muddy road as we meet her, a reference to the new 2018 law allowing women to drive.) In her work she confronts prejudice on all sides. An old man injured in a car accident refuses to let her even touch him, despite her being conservatively dressed, including a niqab on her head (above)–and the only doctor on duty. The supervisor turns the recalcitrant patient over to male nurses who botch his treatment.

Despite such obstacles, Maryam takes her candidacy seriously, getting her sisters and female friends to hold a fashion shot/party and managing to get her message across to a condescending TV interviewer–whose talk show is immediately canceled for having her as a guest.

The plot is fairly conventional and predictable, but Al-Mansour does not entirely sugarcoat her heroine’s ambitions and achievements. The ending is one that shows her winning the battle but losing the war. Though the film is mostly upbeat, its message is ultimately more one of hope for the future than of triumph in the present.

The Perfect Candidate is one of the two films by women directors in the main competition at Venice. The other, Rita Kainejais’ Babyteeth, will be shown on Wednesday, September 4. 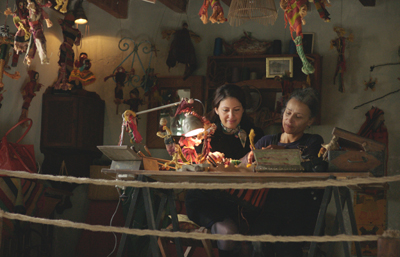 This is not a film in the main competition, but I wanted to include it briefly here because it also deals with women’s obstacles in a Muslim country, Tunisia. Its profound pessimism is the mirror-opposite of The Perfect Candidate‘s relative cheerfulness. In this case the director is a man, veteran Nouri Bouzid. One would not know this from watching the film, which centers almost entirely around women, with the men who appear briefly being threatening figures.

The subject is the plight of women who had been kidnapped and forcibly married to Islamic militant extremists. When they return to their hometowns, they face ongoing torment–harassment in the streets, pimps pressuring them to become prostitutes,  threats of gang rape, and honor-killings by male relatives. The two returned women are Zina, a slightly older woman who was separated from her child when kidnapped, and Djo, a younger woman who vainly tries to live a normal live outside her house but finds herself constantly in danger.

The only sympathetic man is a young homosexual who, despite being threatened himself, tries to protect Djo from violence.  A female lawyer tries to support the two women and is herself harrassed. Djo’s mother provides a safe home that her daughter finds stifling. To pass the time, the mother makes little rag dolls to decorate local homes and shops. These are clearly the “scarecrows” of the title, symbols of the damaged, wasted lives that the film suggests are beyond saving, despite the women having returned to their homes after untold horrors.

The film is grim indeed, and provides a fascinating insight into the culture of Tunisia, which has often been put forward as the most successful of the north African and Middle Eastern countries that went through the so-called Arab Spring nearly a decade ago.

Venice may still not have many women directors in the competition, but when you’re here on the spot, it’s evident that quite a few films center around women in sympathetic and positive ways.

Thanks to Paolo Baratta and Alberto Barbera for another fine festival, and to Peter Cowie for his invitation to participate in the College Cinema program. We also appreciate the kind assistance of Michela Lazzarin and Jasna Zoranovich for helping us before and during our stay. 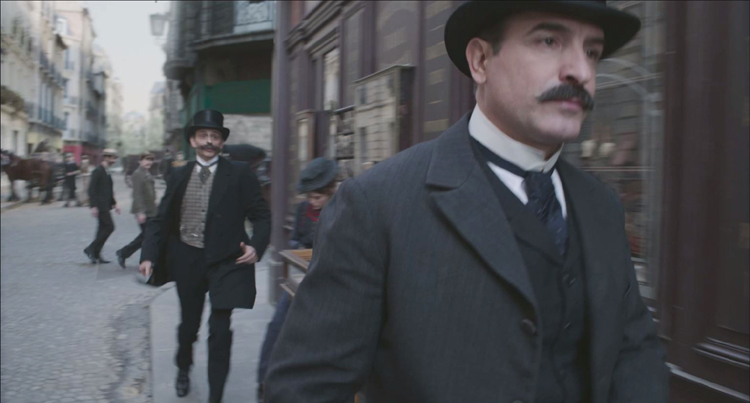