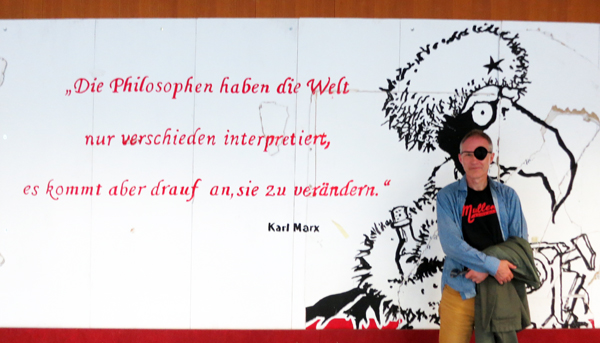 How many universities in the US would post a big quotation from Karl Marx in the lobby of a  classroom building? (Answer: None.) But a cartoonish rendition of Marx’s killer app–the task of philosophy being not only to understand the world but also to change it–greeted the one hundred or so scholars attending the latest conference of the Society for Cognitive Studies of the Moving Image [2] last week at the Universität Hamburg.

How much we’ll change the world remains to be seen. What is clear now is that thanks to the superb organization of Kathrin Fahlenbach, Maike S. Reinerth, and their team, the SCSMI had a lively four days [3] of papers, discussions, and excursions–as well as a screening of a strong film by a skillful director previously unknown to me. In all, every good reason to go to a conference. 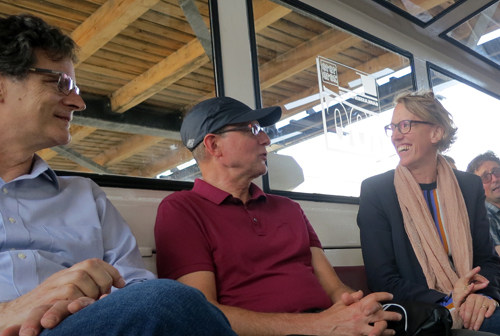 The range was huge, as usual, because this is a very diverse group. Our community, as I’ve mentioned in earlier reports, hosts film scholars, scholars of other media (television, games, internet), psychologists, and philosophers. Recurring questions include: How do viewers comprehend media presentations? What is the role of morality in film and television? How do practitioners conceive their craft? How do media present and trigger emotions? What appeals are specific to certain genres or historical periods? Not least: How may we construct good theories to answer such questions?

Three sessions ran simultaneously at each time slot, so I missed many good presentations. Kristin and I occasionally doubled up. Many of the talks will eventually become published papers, several in the Society’s journal Projections [5], so let me just highlight a few strands.

For those of us interested in how style interacts with narrative, there were several significant presentations. James Cutting, who has pioneered the use of Big Data techniques in scanning large batches of films, provided a compact account of how “sequences” (as opposed to scenes) displayed patterns of coherence and grouping. Karen Pearlman discussed her films, and James examined them to reveal fractal patterns in their rhythms–patterns that match the dynamics of footsteps, heartbeats, and breathing.

Two papers added to our understanding of the Kuleshov effect, much discussed on this site [6]. Marta Calbi and her collaborators conducted EEG testing on spectators exposed to a Kuleshovian film scene, while Anna Kolesnikov, another member of the team, traced the contradictory versions of the “experiments” that Kuleshov and his students purportedly constructed. Both were exciting contributions to our understanding of Kuleshov’s legacy, which as the years go by looks more complex than we had thought.

Other papers on visual style included Barbara Flückiger’s tour of the staggering resource she and her colleagues have devoted to the history of color in film–a database of images [7] from 400 films illustrating a range of technologies, periods, and genres. She has also mounted a magnificent array of tools [8] for detailed analysis of color. (Significantly, she has taken the images from film prints, not video copies.) Here’s one of several stunning images she has taken from Helmut Käutner’s Grosse Freiheit Nr. 7 (1944, Agfa nitrate). 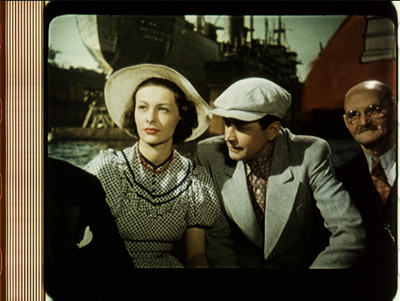 Stephen Prince, whose book Digital Cinema [10] has just been published, surveyed the emergence of “deep fakes,” manipulated images that have no basis in reality but which are indiscernible from an accurate image. Steve was once skeptical that digital images would ever cut us off entirely from photographic reality, but now machine learning has managed to do it. Sped up by social media, the rise of unverifiable “records” creates what he called “an attack on an information system we call society.”

Hitchcock, everybody’s idea of a shrewd filmmaker (when will cognitivists discover Lang?), came in for his usual close treatment. Todd Berliner proposed five ways in which story information can be set up and paid off in a narrative, and he used Psycho as an instance of at least four of those methods. Maria Belodubrovskaya countered Hitchcock’s constant claim that he relied on suspense and not surprise. She showed that both single sequences and overall plots (e.g., Suspicion, Psycho) were heavily dependent on surprise effects.

In the first day, the range of the “humanistic” side of SCSMI was on vivid display. Malcolm Turvey asked whether the give and take of philosophers’ arguments converged on a consensus about truth, the way that much of science progresses. To illustrate the process, he considered the return of an “illusion” theory of images put forth by Robert Hopkins [11]. Later that day, Jeff Smith used the cognitive theory of confirmation bias to show how characters in Spike Lee’s Clockers systematically misunderstand the story situation. The result, enhanced by genre conventions and a violation of some traditions of the detective story, enmeshes the viewer in the same error.

On the other end of the spectrum, there were papers mobilizing empirical research. Timothy Justus drew upon Lisa Feldman’s work in How Emotions Are Made [12] to suggest that a biocultural account of facial expression should not rely too strongly on Paul Ekman’s classic argument about universal, basic expressions.  More room, Justus proposed, should be given to cultural forces that build “emotion concepts” that filmmakers and viewers draw on.

A more hands-on empirical project was that coming from a team at Aarhus university. Jens Kjeldgaard-Christiansen posed the question: What if sympathy for a film’s villain varies with the personality of the spectator? As he put it, “If you are like a villain, will you like a villain?” So via Amazon’s Mechanical Turk the team ran questionnaires testing how personality types matched tastes in villains. Not to spoil their public announcement, I’ll just say that the results seem to confirm the belief that the most dangerous creatures on earth are young human males.

There was a lot more here than I can report, including provocative keynote addresses from Professors Anne Bartsch and Cornelia Müller (presenting work done with Hermann Kappelhoff). There was also a moving tribute to Torben Grodal, a central force in SCSMI and a leading-edge theorist applying evolutionary psychology and embodiment theory to traditional genre studies.

And, since SCSMI wants to understand how creators create, there was a film and its maker. 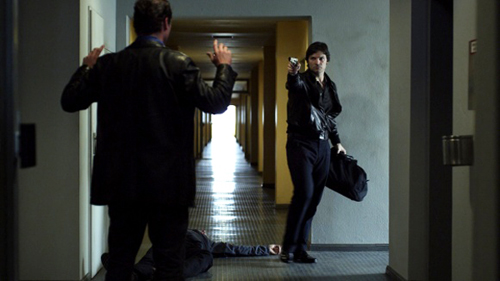 In the past, our conferences have featured Lars von Trier and Béla Tarr, talking with us about their work. This time the guest was Thomas Arslan, a prominent “Berlin-school” director, who brought his 2010 film In the Shadows (Im Schatten) to the lovely Cinema Metropolis [14].

The film is a dry, hard-edged crime exercise. Trojan, fresh out of prison, comes to his boss to claim his share of the loot. In a tense confrontation he manages to get some of what he’s owed, but he’s now a target for elimination. He searches for a new robbery scheme and settles on the heist of an armored car. As usual, things don’t go as planned, particularly due to the intervention of a crooked cop.

Shot in a laconic style, In the Shadows took advantage of the Red One camera to produce remarkable depth in dark surroundings. (We saw it as a print because in 2010 theatres weren’t quite ready to show digital files. The print looked fine.) The drab locations complemented the anti-psychological impact of the story. Characters barely speak, the music is spare and almost subliminal, and the framing doesn’t accentuate the action expressively. In his post-film discussion, Arslan explained that the style grew out of the small budget and the rapid schedule. The result was a sort of modern B-film, avoiding the excess of CinemaScope and explosive chase sequences.

Arslan refuses to glamorize his gangsters, but he summons up sympathy for Trojan by minimal means. The protagonist is a solid, efficient professional, and he’s loyal to his boss until he realizes he’ll be betrayed. And as Hollywood screenwriters would remind us, you can sympathize with someone who’s been treated unfairly. I liked the unfussy handling of the story; it was a bit reminiscent of Rudolf Thome’s bare-bones Detective (1968). Arslan would be a good director to shoot a Richard Stark noir. “He does it without bullshit,” Arslan said of his thieving protagonist. It’s a good description of Arslan’s own technique.

SCSMI continues its tradition of merging humanistic inquiry with findings from empirical science. We can fruitfully ask questions that cut across traditional boundaries if we ground those questions in clear concepts and solid evidence. Our gathering next year moves back to the States–Grand Rapids, no less. More fun on the way.

On Richard Stark noir novels, see here [16] and here [17]. In the Shadows would fit nicely into my discussion of conventions of the heist film [18].

My own SCSMI contributions were two: a tribute to Torben Grodal and a little talk on contemporary women’s domestic thrillers (Gone Girl, The Girl on the Train, etc.). I may post the latter as a video lecture later this summer. 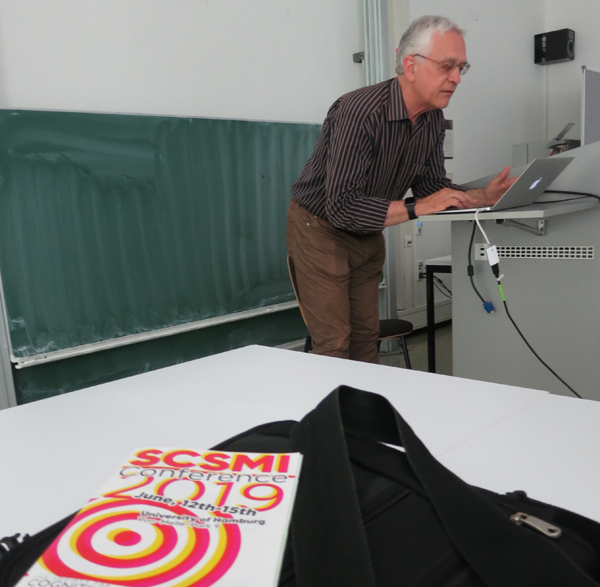