Flicker Alley has once again made a great contribution to the recovery of silent cinema by releasing two restorations of films starring Mary Pickford.

Pickford was an extraordinarily successful figure of the era. Her enormous popularity as a star lasted from her days acting in Griffith Biograph films into the early sound period. She was one of the four founding artists of United Artists. Indeed, she was the new distribution company’s mainstay for a time, as her co-founders, Douglas Fairbanks, Charles Chaplin, and D. W. Griffith (seen above watching her sign the contract) worked off their commitments to other distributors or made films that were less than successful (notably Chaplin’s 1923 A Woman of Paris). After retiring from acting, Pickford strove to retain prints of all the films she had been in, hoping to guarantee their ultimate survival.

One of Flicker Alley’s two films, Little Annie Rooney [2] (1925, dir. William Beaudine) was restored from a nitrate print in her collection, held at the Library of Congress. The other, Fanchon the Cricket [3] (1915, dir. James Kirkwood), she and everyone else feared was lost. In 2012, however, the Mary Pickford Foundation discovered that the Cinémathèque française had a nitrate copy of Fanchon, and, with contributions from an incomplete nitrate print at the British Film Institute, a restoration was achieved at l’Immagine Ritrovata labs in Bologna. Both films come in a dual edition of DVD and Blu-ray, accompanied by new scores and program booklets. Both are region-free. The visual qualify of both restorations is excellent.

The two films are dramatically different from each other. Fanchon is set in 19th Century rural France, while Little Annie Rooney takes place in contemporary New York. Still, in each Pickford plays a wild young woman–young meaning almost child-like in her innocence and aggressive behavior–and yet one ready to step abruptly into romance and marriage. 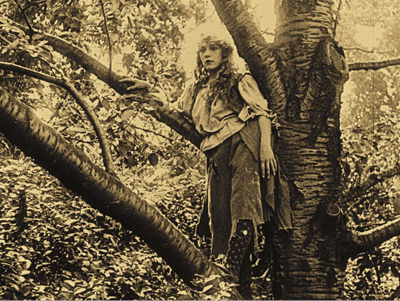 The origin of the film dates back to Georges Sand’s 1849 novel, La petite Fadette [5], written in collaboration with François le Champi. (“Fadette” apparently refers to a girl with fairy-like powers.) Set in the 19th Century French countryside, it marked Sand’s return to a focus on the rural poor. The novel was translated into English immediately and republished repeatedly with various titles in later translations, most recently in 2017.

In 1861, an English-language adaptation as a play, Fanchon the Cricket, by August Waldauer premiered in New Orleans to great success. (“Fanchon” roughly means someone who is free.) Its star, Maggie Mitchell, apparently the Pickford of her day, continued to tour in the role for over thirty years, still playing the teenage heroine into her 50s. She died in 1918 at aged 85 and thus may have seen Pickford play the role on the screen. (Numerous actresses had also starred as Fanchon in the popular play. There was a 1912 film version from IMP.)

Fanchon tells a remarkably unclassical story for 1915, a year in which the classical Hollywood style was well on its way to maturity. There is relatively little plot. The action takes place in an unspecified rural area of France in the 19th Century. Landry, the son of a rich local family, has become engaged to Madelon. During the celebrations, we are introduced to Fanchon, a waif living in the forest with her grandmother, who has a reputation as a witch. Fanchon is torn between her desire for friendship and her mischievous antagonism with the young people of the area, who fear her.

These young people seem perpetually to be celebrating the engagement or local saints’ days, venturing out into the forest for picnics and dances, despite the fact that they seem unreasonably frightened by Fanchon’s presence there. Repeatedly they encounter her, who  deliberately tries to scare them, then awkwardly dresses up in her mother’s outmoded clothes and tries aggressively to join their frolics. 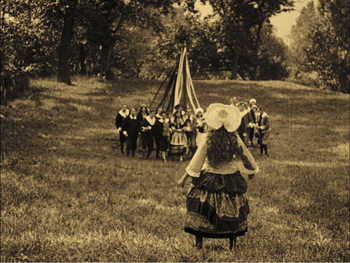 Despite Landry’s engagement, he is reluctantly drawn to her, especially when she saves him from drowning in a lake. Only late in the plot do we discover key premises. First, Fanchon’s grandmother had been forbidden to marry Landry’s uncle, her true love, which led her to her current hermit-like existence. Second, Fanchon, who has been actively luring Landry away from his fiancée, would never marry him without his father’s consent. These are things that a classically constructed plot would set up much earlier, creating tension that is singularly lacking in this film. Still, all ends well.

The film is almost entirely shot outdoors, in the fields, forests, and lakes of Pennsylvania, with resulting beautiful compositions (see bottom). 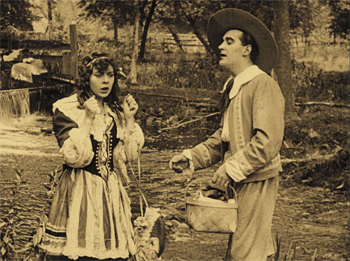 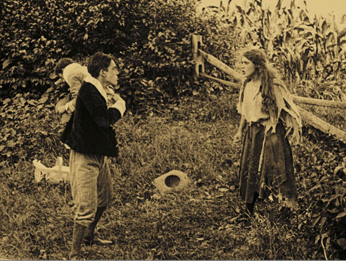 Pickford fans probably know that Fanchon the Cricket is the only film in which all three Pickfords played. Lottie is Madelon (above left), the petulant betrothed of the hero, Landry, and Jack plays a young bully whom Fanchon fights when she sees him tormenting Landry’s “half-wit brother” (above right). 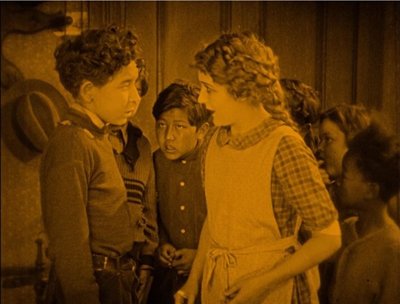 The films begins with an expository title: “Up town a gang calls itself ‘Society’–down town a gang calls itself a ‘Gang’ and lets it go at that. –Let’s go down town!” The opening scene then shows two groups of kids caught up in a street fight. The whole thing is comic, if pretty intense, and its only female participant is Annie Rooney, apparently a youngish child, played by Pickford. Her allies are an ethnically diverse bunch, including Abie Levy (above, played by Spec O’Donnell, who played so many mischievous-son roles in Max Davidson’s Jewish comic shorts [10] of the 1920s). Pickford called her young cast a “mini League of Nations.” These youngsters are more than background decoration, with some of them having roles to play in the action, as when Abie’s family comforts Annie after her father is shot. 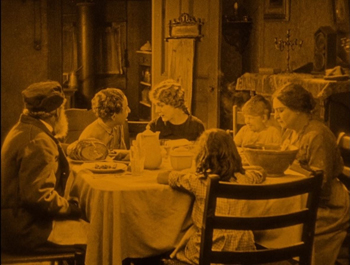 Although the opening part of the film is typical Pickford comedy, there are grown-up gangs in the plot as well, with Annie’s brother drawn into bad company, despite their widowed father being an Irish cop. Indeed, the narrative shifts into what is nearly a Von Sternberg film. There’s an atmospheric scene in a dance-hall where the father is gunned down by a lurking thug and Annie’s love interest (turns out she’s not as young as her behavior would suggest) gets blamed because he happens to be standing by Rooney at the time. 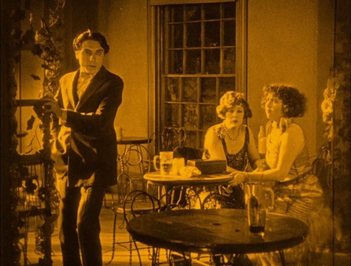 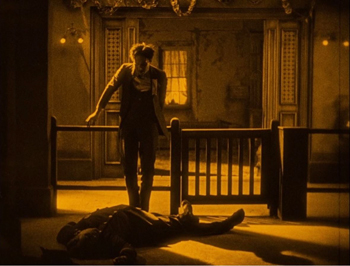 The lighting in these and other shots is impressive–not surprisingly, given that Pickford was very particular about the photography for her films. Her regular cinematographer, Charles Rosher, was one of the tops in the field during the silent era. Hal Mohr assisted, and the results beautifully employ the three-point lighting system developed during the late 1910s and 1920s. 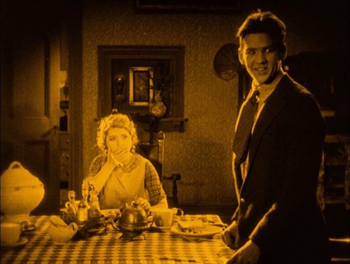 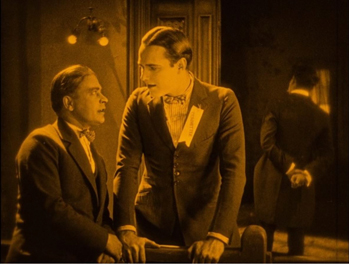 Little Annie Rooney was a success, showing that Pickford could lure in the audience with her accustomed youthful comedy and then transition into a more serious plot that showed off her dramatic abilities as well.

Flicker Alley’s press announcement states that these two releases are the “first of a planned series of Mary Pickford films that showcase the breadth and depth of her talents as well as that of the finest behind-the-camera craftspeople of the time.” Given Pickford’s prolific output, one can only hope that this series goes on and on. 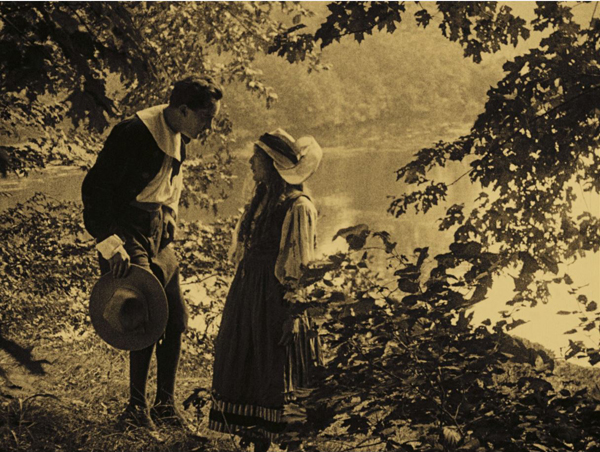