It’s striking how many stories depend on crimes. Genre movies do, of course, but so do art films (The Conformist, Blow-Up) and many of those in between (Run Lola Run, Memento, Nocturnal Animals). The crime might be in the future (as in heist films  [2]), the ongoing present (many thrillers [3]), or the distant past (dramas revealing buried family secrets).

Crime yields narrative dividends. It permits storytellers to probe unusual psychological states and complex moral choices (as in novels like Crime and Punishment, The Stranger). You can build curiosity about past transgressions, suspense about whether a crime will be revealed, and surprise when bad deeds surface. Crime has an affinity with another appeal: mystery. Not all mysteries involve crimes (e.g., perhaps The Turn of the Screw), and not all crime stories depend on mystery (e.g., many gangster movies). Still, crime laced with mystery creates a powerful brew, as Dickens, Wilkie Collins, John le Carré, and detective writers have shown.

We ought, then, to expect that a film festival will offer a panorama of criminal activity. Venice did last year [4] and this [5], and so did the latest edition of the  Vancouver International Film Festival [6]. Some movies were straightforward thrillers, some introduced crime obliquely. In one the question of whether a crime was committed at all led–yes–to a full-fledged murder. 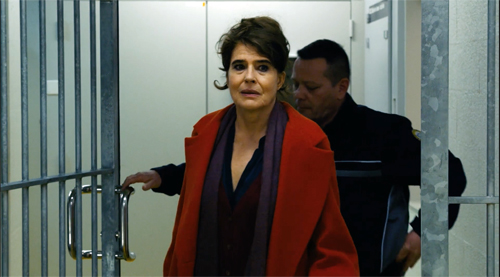 Diary of My Mind.

Start with the package of four Swiss TV episodes from the series Shock Wave. Produced by Lionel Baier, these dramas were based on real cases–some fairly distant, others more recent, all involving teenagers. The episodes offer an anthology of options on how to trace the progress of a crime.

In Sirius a rural cult prepares for a mass suicide in expectation they’ll be resurrected on an extraterrestrial realm. The film focuses largely on Hugo, a teenager turned over to the cult by his parents. Director Frédéric Mermoud gives the group’s suicide preparations a solemnity that contrasts sharply with the food-fight that they indulge in the night before. Similarly, The Valley presents a tense account of a young car thief pursued by the police. Locking us to his consciousness and a linear time scheme, director Jean-Stéphane Bron summons up a good deal of suspense around the boy’s prospects of survival in increasingly unfriendly mountain terrain.

Sirius and The Valley give us straightforward chronology, but First Name Mathieu, Baier’s directorial contribution, offers something else. A serial killer is raping and murdering young men, but one of his victims, Mathieu, manages to escape. The film’s narration is split. Mathieu struggles to readjust to life at home and at school, while the police try to coax a firm identification from him. This action is punctuated by flashback glimpses of the traumatic crime. The result explores the parents’ uncertainty about how restore the routines of normal life, the police inspector’s unwillingness to press Mathieu too hard, and the boy’s self-consciousness and guilt as the target of the town’s morbid curiosity.

This insistence on the aftereffects of a crime dominates Diary of My Mind, Ursula Meier’s contribution to the series. This too uses flashbacks, mostly to the moments right after a high-school boy kills his mother and father. But there’s no whodunit factor; we know that Ben is guilty. The question is why. Ben’s diary seems to offer a decisive clue (“I must kill them”), but just as important, the magistrate thinks, is his creative writing under the tutelage of Madame Fontanel, played by the axiomatic Fanny Ardent. Because she encouraged her students to expose their authentic feelings, Ben’s hatred of his father had surfaced in his classroom work. Perfectly normal for a young man, she assures the magistrate. No, he asserts: a warning you ignored. The shock waves that engulf onlookers after a crime, the suggestion that art can be both therapeutic and dangerous, the question of a teacher’s duty to both her pupils and the society outside the classroom–Diary of My Mind raises these and other themes in a compact, engaging tale. 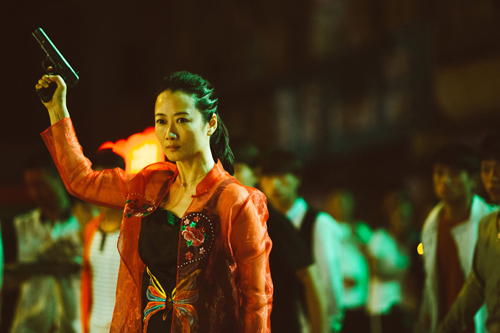 Chinese director Jia Zhangke is no stranger to criminal matters. His films have dwelt on street hustles, botched bank robberies, and hoodlums at many ranks. Ash Is Purest White is  a gangster saga, tracing how a tough woman, Qiao, survives across the years 2001-2018. Initially the mistress of boss Bin, Qiao rescues him from a violent beatdown using his pistol. She takes the blame for owning a firearm. Getting out of prison, Qiao tracks down the now-weakened Bin, who has taken up with another woman.

Ash Is Purest White tackles a familiar schema, the fall of a gang leader, from the unusual perspective of the woman beside him, who turns out to be stronger than he is. Most of the film is filtered through her experience, and along with her we learn of Bin’s decline and betrayal, along with his integration into the corrupt and bureaucratic capitalism of twenty-first century China. The second half of the film shows Qiao forced to survive outside the gang’s milieu. A funny scene plays out one of her scams: picking a prosperous man at random, she announces that her sister, implicitly his mistress, is pregnant.  Just as important, Qiao’s adventures allow Jia to survey current mainland fads and follies, including belief in UFO visits.

Among those follies, Bin suggests, is a trust in mass-media images.  As Ozu’s crime films (Walk Cheerfully, Dragnet Girl) suggested that 1930s Japanese street punks imitated Warner Bros. gangsters, so Jia’s mainland hoods model themselves on the romantic heroes of Hong Kong cinema. They raptly watch videos of Tragic Hero (1987) and cavort to the sound of Sally Yeh’s mournful theme [9] from The Killer (1989). They derive their sense of the jianghu--that landscape of mountains and rivers that was the backdrop of ancient chivalry–not from lore or even martial-arts novels but from the violent underworld shown on TV screens.

Bin’s decline is portrayed as abandoning those ideals of righteousness and self-sacrifice flamboyantly dramatized in the movies. But Qiao clings to the imaginary jianghu to the end. She explains to him that everything she did was for their old code, but as for him: “You’re no longer in the jianghu. You wouldn’t understand.” You can respect his pragmatism and admire her tenacity, but he’s still a feeble figure, and she’s left running a seedy mahjongg joint–one much less glamorous than the club she swanned through at the film’s start. Appropriately for someone who got her idea of heroism from videos, we last see her as a speckled figure on a CCTV monitor.

From dailiness to darkness

Often the crime in question is presented explicitly, but two films leave it to us to imagine what shadowy doings could have led to what we see. In Manta Ray, by Phuttiphong “Pom” Aroonpheng, we get the familiar motif of swapped identity. A Thai fisherman finds a wounded man in the forest and nurses him back to health. The victim is a mute Rohinga whom the fisherman names Thongchai. They share a home and the occasional dance and swim, even a DIY disco. 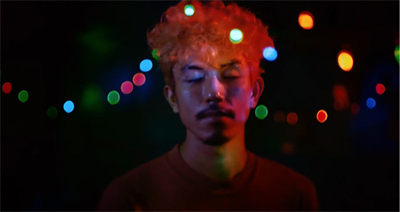 But who attacked Thongchai in the forest, and why? And what is the connection to the unearthly gunman who paces through the forest, bedecked in pulsating Christmas bulbs? And what makes the foliage teem with gems glowing in the murk? Somewhere, there has been a crime.

Manta Ray accumulates its impact gradually, with the scenes of the men’s routines giving way to mystery when the fisherman vanishes and Thongchai (named by the fisherman for a Thai pop singer) is trailed by a ninja-like figure clad in a red cagoule. A disappearance and a reappearance (of the fisherman’s wife) punctuate moody scenes of trees and sea. The opacity of the action makes a political point: offscreen, Thais brutally hunt down the refugee Rohingas. But the critique of anti-immigrant brutality is intensified by the lustrous cinematography (Aroonpheng was a top DP). You can feel the texture of the planks in the cabin and the sharp edges of the gems that fingers root out of the forest floor. This is probably the most tactile movie I saw at VIFF.

Then there was Lee Chang-dong’s Burning. Lee started his career strong and has stayed that way. The slowly paced, Kitanoesque gangster story Green Fish (1997) and Peppermint Candy (1999), with its reverse-order chronology, both achieved local popularity and established him as a fixture on the festival circuit. Oasis (2002), a daring romance of a disabled couple, won a special prize at Venice. Secret Sunshine (2007) brought Lee even more widespread fame. Like the episodes of Shock Waves, it dealt with the aftereffects of a horrific crime. Virtually everyone I know who saw the film remembers most vividly a particular scene: the heroine, having converted to Christianity and at last ready to forgive the perpetrator, visits him in prison. It’s one of the most nakedly blasphemous scenes I’ve ever seen, carried off with a shocking calm. Crime–this time, a gang rape–is also at the center of Poetry (2010), with another mother facing familial tragedy.

Most of these plots, particularly Poetry, are rather busy, but Burning is more stripped down (though not short). Lee Dong-su maintains the shabby family farm while his father is in jail awaiting trial. In town Dong-su meets Haemi, a former classmate now running sidewalk giveaways.

She lures him into her life by asking him to feed her cat while she’s in Africa, but before she leaves they start an affair. But he seldom breaks into a smile, favoring a puckered-lip passivity. After their coupling, we get his POV on a blank wall.

This turns out to be the first of many disquieting passages. Between bouts of tending livestock, feeding Haemi’s cat, and masturbating to her picture, Dong-su gets mysterious phone calls with no one on the line. He meets Haemi at the airport only to discover that she’s formed a friendship (or more?) with the suave Ben, whose gentle courtesy makes Dong-su feel an even bigger bumpkin. Soon the three are hanging out together, but at parties Dong-su can only stare at Ben’s yuppie friends. Dong-su, who wants to be a writer, is a fan of Faulkner, but Ben compares himself to the Great Gatsby.

After a long night of relaxing at the farm, with the men watching Haemi dance topless, she disappears. A black frame, a dream of a burning greenhouse, and Dong-su is left alone halfway through the movie. What happened to Haemi? And why does Ben say he enjoys torching greenhouses? Dong-su turns detective,

Lee is a master of pacing, and the deliberateness of the film delicately turns a romantic drama into a critique of entitled lifestyles and then into a psychological thriller. We are locked to Dong-su’s consciousness except for a couple of telltale shots of Ben calmly studying his rival from afar. We get Vertigo-like sequences of Dong-su trailing Ben and probing for clues and perhaps having more dreams. At the same time, Dong-su starts writing, as if Haemi’s disappearance has inspired him, but he finds more violent ways to release his simmering bewilderment.

After only one viewing, I didn’t find Burning as devastating a film as Secret Sunshine or Poetry, but I’d gladly watch it again and probably I’d see more in it. Lee manages to sustain over two and a half hours a plot centering on three, then two principal characters. He has earned the right to soberly take us into the mundane rhythm of a loner’s life and then shatter that through an encounter with two enigmatic figures who may be playing mind games. As with Manta Ray, we have to infer some of the action behind the scenes, but that just shows that in cinema, classic or modern, crime can pay.

Snapshots of festival activities are on our Instagram page. [13] 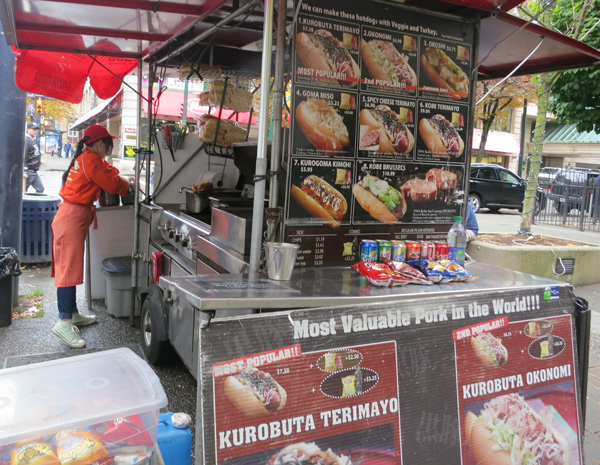